On November 5, 2019, I had the opportunity to testify before the BBRS in support of a net zero stretch code, together with a group representing the AEC industry. The group presented a letter of support signed by over 1,400 design and construction professionals, including 95 firms and 1,341 individuals, encouraging BBRS to continue to advance the development of a net zero stretch code.

The stretch code was developed as part of the State energy code to allow cities and towns to choose a more energy efficient option for the development of new buildings. Initially, the stretch code required 20% energy savings over the base code, which at the time was IECC-2009.

Since that time the Stretch Code has remained essentially the same. As the base energy code becomes more stringent, the Stretch Code is less of a “stretch.” (The current requirement is 10% energy savings over IECC-2015, and IECC-2018 is expected to take effect in 2020 as the base code, with no change to the stretch code.) Additionally, the urgency of the climate imperative demands more aggressive action to ensure that new construction achieves energy performance levels aligned with the State’s emissions reductions goals, as well as the Paris Climate agreement, which many cities and towns have pledged to honor in spite of the US withdrawal from the agreement.

Other than the stretch code option, State law prohibits cities and towns from creating energy codes that are more stringent than the Statewide energy code, and for good reason. This creates a uniform expectation for designers and builders across the state. With the reality of climate change, however, many communities are looking for tools to drive down their carbon footprints. As buildings represent approximately 40% of emissions in Massachusetts, a more stringent energy code could be leveraged to address the performance of new construction. Communities interested in driving net zero energy buildings have been pursuing other means of implementing these requirements, such as through the zoning code, or by prohibiting the installation of new gas lines (on the customer side of the meter). However, a revised energy code is arguably a more effective way to achieve this end on a broader basis.

Bill H.2865/S.1935, currently in the Massachusetts legislature, would direct the Board of Building Regulation and Standards (BBRS) – the entity responsible for developing the state energy code regulations – to develop a net zero stretch code. This would be an option under the energy code for communities that choose to require new net zero buildings. The bill would require the BBRS to define what net zero buildings are and develop regulations to be fully implemented by 2030 through a tiered implementation plan to gradually phase in requirements. 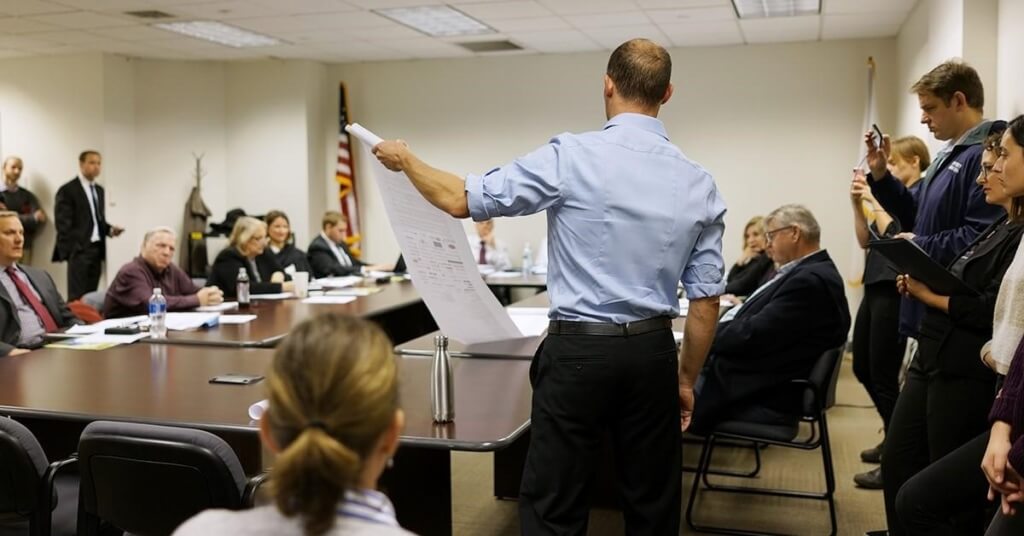 Payette’s testimony shared an example that both demonstrates our firm’s commitment to net zero energy buildings and illustrates the feasibility of these buildings even for high energy intensity building types. Payette’s design practice specializes in technology-rich medical and laboratory buildings, which are typically some of the highest consumers of energy. It can be challenging to reduce energy usage in these specialized environments, but because of their substantial environmental impact, the imperative to do so is that much greater.

The DCAMM Chelsea Soldier’s home is a 154 room, long-term care facility for Massachusetts veterans with a predicted Energy Use Intensity of 46 kBtu/sf-yr. This net-zero energy ready, all-electric building is currently under construction, and was designed to use 63% less energy than a typical facility. Renewable heating and cooling will be provided by a geothermal system, and a 700 kW rooftop photovoltaic system will provide 10% of the buildings energy needs. The Chelsea Soldier’s home could be classified as a Class D Net Zero Energy Building if the remainder of the electricity were purchased exclusively from off-site renewable energy sources.

Not only was this building designed with exceptional energy performance in mind, but the net zero energy ready design was achieved with a negligible increase in first cost – a premium of only $233,000, or 0.1% of the construction cost. The total cost of ownership over the lifetime of the building will be $6 million dollars less than a typical high-performance design.

Because Payette has demonstrated that achieving cost-effective, low energy buildings is possible – even for the most energy intensive building types – we support the development of a net zero stretch code as a critical tool for combating climate change. Efficient building design needs to be prioritized over the option to purchase renewable power to meet net zero energy. It is critical however, that the new net zero stretch code provide flexibility for buildings that can’t produce all of the energy they require on-site, including those with limited site area, very tall buildings and energy intensive building types such as labs and hospitals, to comply through the purchase of off-site renewable energy.

On heels of the Executive Order signed last week by the Mayor of Boston that will require all new municipal building construction to be low-energy and fossil fuel free to target a Zero Net Carbon standard, a Net Zero Stretch Code for all new construction in the state of Massachusetts is hopefully not far behind.