A common dilemma that governs performance-based analysis is that in order to get truly valuable metrics for design options (such as energy use or HVAC cost), a lot of details must be known about the design option. Yet, so many of the critical decisions about building orientation, massing and façade language are made well before any of these building details are available.

Dealing with this dilemma is a challenge since design teams may not have the option to simply wait to get feedback on building performance. However, in the worst-case scenarios, the desire to provide feedback without having enough project detail can result in more harm than help. Without knowledge about critical building characteristics, practitioners can sink time into detailed analyses with assumptions that aren’t remotely close to the final building. Colloquially, we might refer to this type of study founded on shaky assumptions as “garbage in, garbage out” since the quality of the results aren’t any higher than the quality of inputs to the study. Such analyses may seem harmless enough on their own, but when they are used to value certain design options over others, their accuracy is critical.

A more effective way to deal with this early design challenge, which does not involve simply waiting or making shaky assumptions, is to use an analysis that focuses only on the criteria that needs evaluation. For example, if the design team wants to evaluate building massing and shading strategies, a full-building energy model with detailed room geometry isn’t necessary. Instead, design teams can run an analysis that only requires façade geometry as an input – such as a solar radiation study. For this reason, solar studies have risen to become one of our most well used analyses at Payette and nearly every new construction project in our office utilizes this technique. The basic premise is to separate the portions of the sky that have helpful wintertime sun from those that have harmful summertime sun using the coldness or hotness of the outdoor temperature as a guide. This results in the creation of a “solar benefit” sky model. 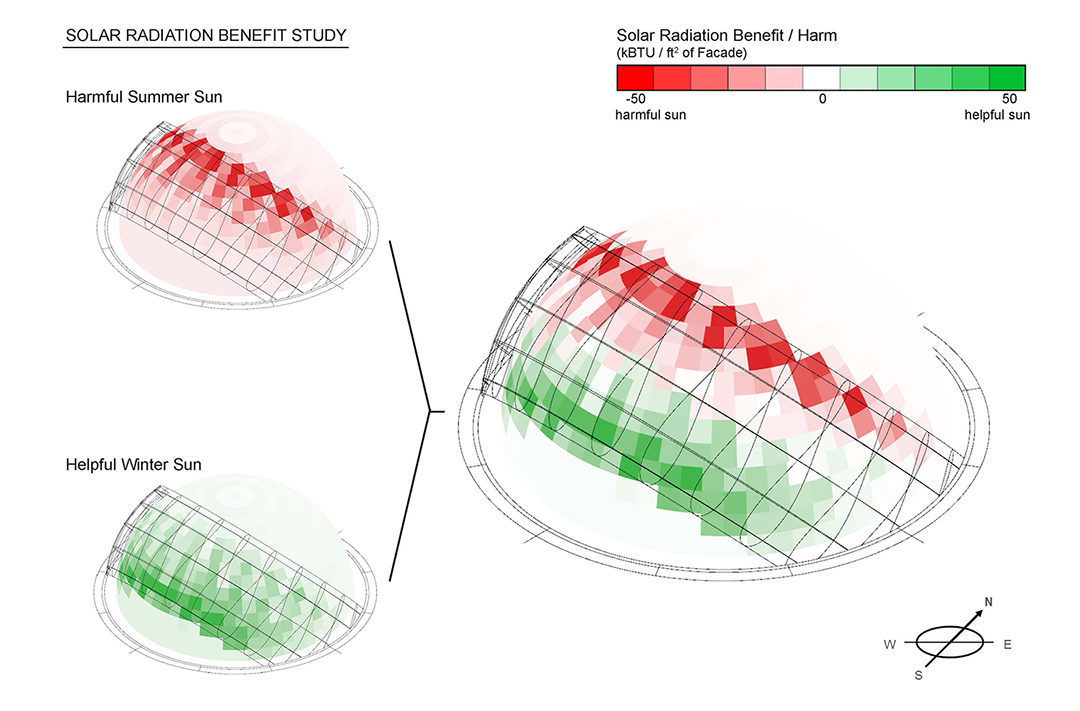 This “radiation benefit” sky is then used to analyze geometry and façade options, coloring geometry with an intuitive color scheme that shows the better performing orientations in green and the worse performing in red. The façade-normalized sum of the results can also be used to quickly compare design options to one another, giving a general sense of which options are better than others and how they compare to standard baselines like a code-compliant 40% glazed building without a particular orientation.

It is important to note, such analyses don’t make absolute claims that a certain design will save X percentage of overall building energy use or Y percentage of HVAC size, as such numbers cannot be accurately known in early design stages. However, the analyses do enable us to understand when a certain design performs better or worse than another without waiting until later in design stages or making erroneous assumptions. At Payette, we are happy to say that all projects where we have gone back in later design stages to evaluate the impact of our solar radiation-based decisions, we have found that they resulted in tangible savings to energy use and HVAC size. In some cases, these benefits have helped ensure the endurance of certain design features throughout the process since the performance benefits they provide become critical to the project’s needs.

As we work more with such studies, we have integrated them into our own recently released SkinDesigner plugin that rapidly generate common façade geometries. As a result, designers can evaluate façade options in real-time, helping build an intuition about what strategies are more helpful than others and ultimately generate a design with optimum energy performance.

Related:
SkinDesigner Plugin for Grasshopper is now Available!
The Evolution of Payette’s Parametric Façade Tools
The Next Thing in Parametric Design