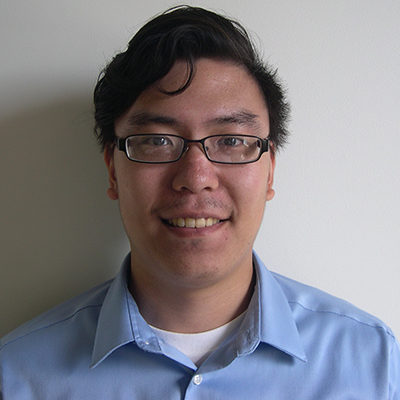 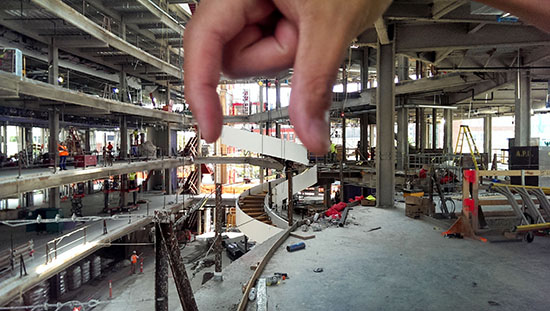 Recently a number of us from the Northeastern University team visited the ISEC site on Columbus Avenue to see the construction progress on the building. The spiral stair in the atrium is currently underway and we happened to arrive right as the construction crew was installing more segments of it.

As a central component of the atrium space, the stair went through a rigorous design process with the help of one team member’s rhino modeling prowess, as well as the design and coordination skills of the team as a whole. Initially, the stair design adhered to the an original concept of the building: its spiral derived in plan by two ellipses, creating a unique vertical circulation. The design focused on how an individual experiences and traverses the atrium vertically; the intent of the geometry was to direct views toward specific areas in the space like the curtain wall and main entry. Ultimately, the stair geometry was simplified to a circle in plan, rather than the “pebble” shape. The modeling of the stair was executed exclusively in Rhino.

All of the fabrication for the stair was done locally. The risers are cut and rolled by Freadman Steel, Inc., out of Pittsfield. They have a range of markets, including power plants and even shipbuilding, but typically get commissions for military jobs. Initially the team thought it would be necessary to look outside of Massachusetts (i.e. Chicago or Alabama) to find a fabricator capable of breaking and rolling the shapes required, but fortunately Freadman Steel was up to the task. For the remainder of the fabrication, Payette is working with DeAngelis Iron Work Inc., located in South Easton. The company does both contemporary commercial and residential work as well as restoration jobs. You may recognize some of their restoration projects, like the Copley Station Headhouse on Bolyston St. and our own office building’s Atlantic Wharf’s (formerly Russia Wharf) cast iron façade.

The stair is designed such that the tread, riser and stringer all work together as one self-supporting system, requiring only structural connections at each floor landing for additional support. 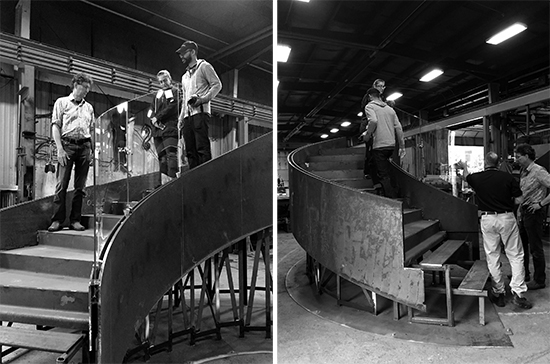 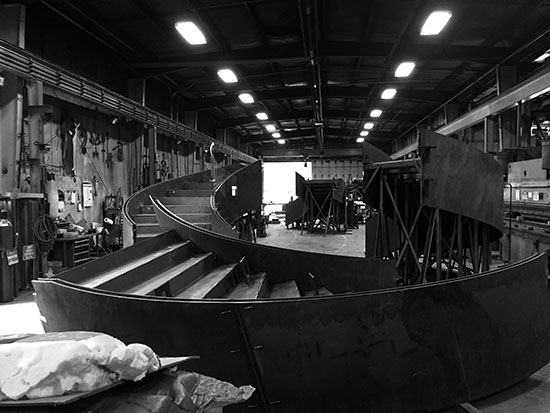 The stair is prefabricated in the DeAngelis shop, three segments per full spiral. They are then brought on site where a crane lowers them into the atrium space through the middle skylight.

The stair installation looked like it was progressing fairly quickly and without any major issues. Even with little more than just the bare structure in place, the character of the space is really starting to come through, and the stair plays a large role in that, which is all very exciting to see. 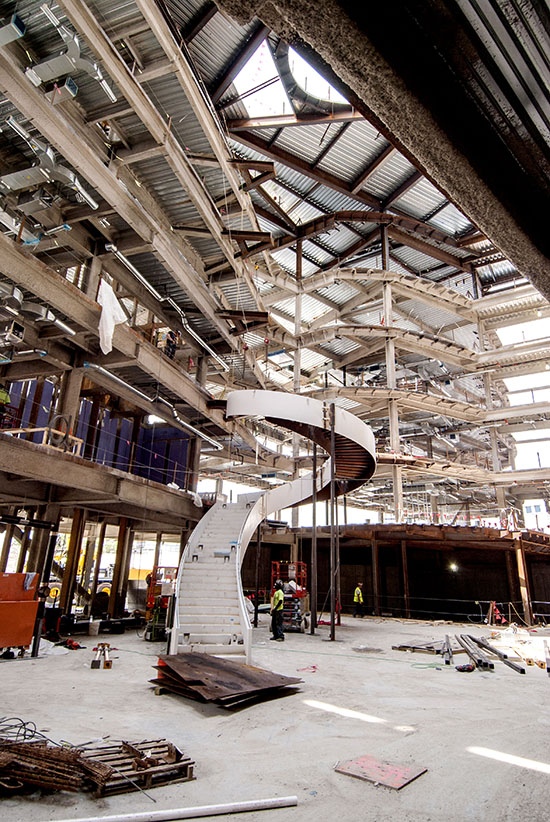 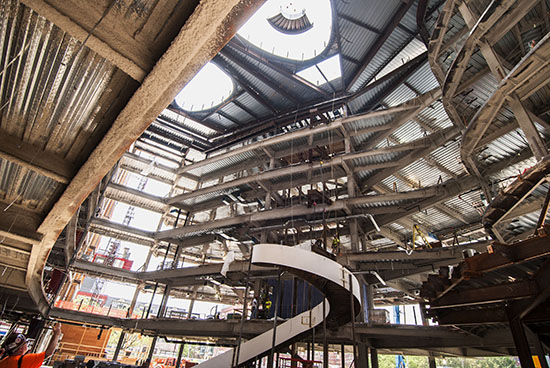 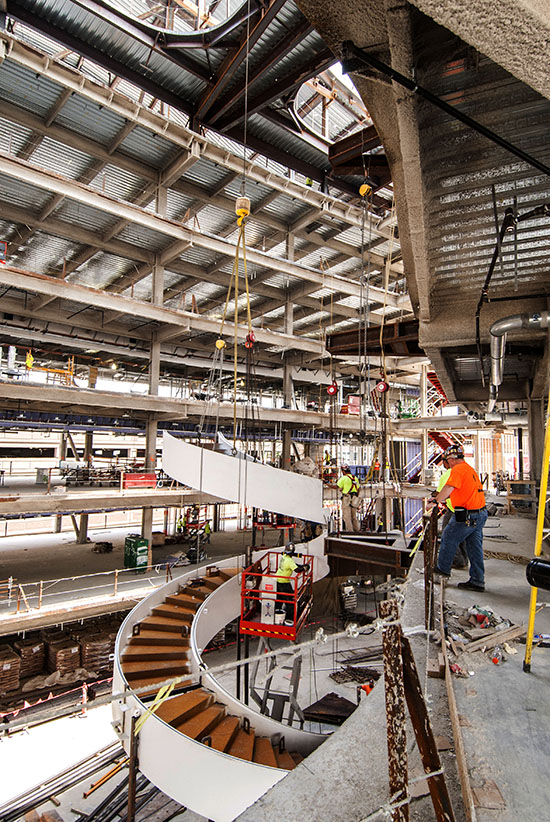 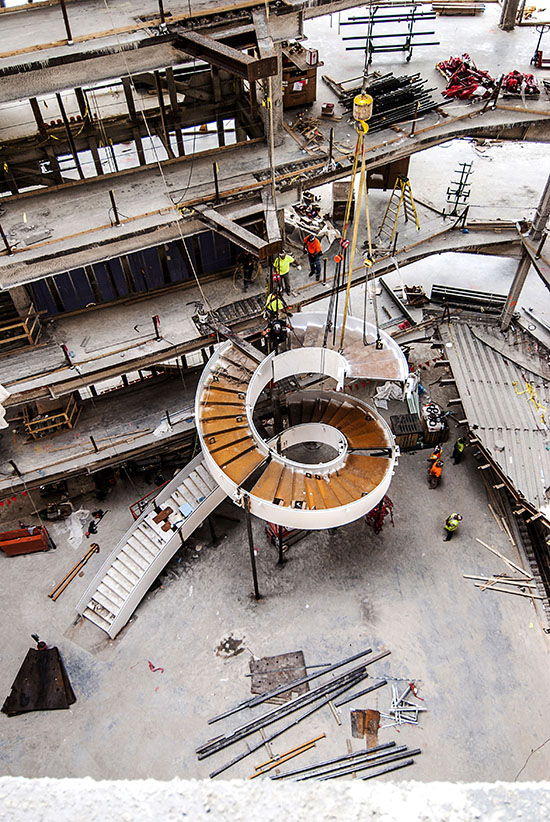 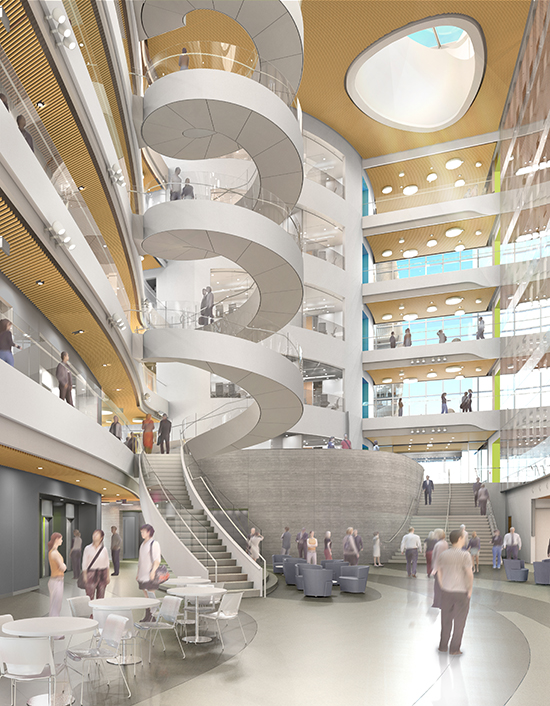 When I first saw the renderings of this atrium I wondered how it would be carried out. WOW! Great job. It will become one of the main gathering places of Northeastern.

What an attractive feature. ISEC will be a new landmark for Northeastern University and a wonderful place to meet. Well done