The Cornell University Chemical and Biomolecular Engineering Unit Operations Laboratory (UO Lab) is home to a senior level capstone course in the University’s undergraduate curriculum. Prior to the 2015 overhaul of the lab, the most recent renovation of this space occurred in the late ’80s. The space was in need of renewal due to more than doubled course enrollment, an increased number of experiments and new laboratory space type needs.

The goals of the project were twofold: bring more visibility to this unique course within an undergraduate’s experience in the Department and secondly, make more efficient use of the space to accommodate an expanded set of functions. Through a use of iconic architectural elements, transparency and natural light, the design team created within this two-story space a compact suite of interconnected spaces that dramatically increases the visibility and functionality of the lab with a minimal increase in square footage.

A two-story central fin wall, whose vibrant dark grey and red color palette contrasts with the more neutral colors elsewhere in the space, both delineates and connects the laboratory’s three functions: the existing UO Lab functions, including a two-story distillation column, a new maker space and a new biochemistry project lab. At the upper level, the fin wall separates the maker space, an impromptu fabrication space, from the more traditional wet lab setup of the project lab. It also serves to define the edge of the double height space that houses the distillation column and spiral stair connecting to the UO Lab functions on the lower level. On the UO Lab level, the fin wall creates a visual connection to the spaces above as well as an organizing spine for the lab. By keeping the delineated volumes open to on another, the various spaces can easily be appropriated by the three programs as needed, creating additional functional flexibility.

The second iconic element creating the lab’s image is the undulating high gloss white baffle ceiling. The ceiling’s overall up and down rhythm responds to existing utility crossings above the ceiling, newly installed utilities, and opportunities to raise the ceiling height wherever possible to increase the depth of natural daylight into the space. The baffle ceiling unites the three spaces while allowing each to address their particular functional requirements.

Historically, the activity of the UO Lab was hidden behind walls, which concealed the exciting student project work beyond. These walls prevented visual connection to the building’s corridors. Our design concept dramatically changes this to include a new glass wall and doors into the space, an approach completely unique to the entire solid wall-lined existing corridors. This is further heightened due to the increase in natural daylight penetrating the space due to the removal of existing spandrels panels. These spandrels reveal the original large glass windows that were previously partially concealed. The placement of the distillation column at the center of the double story space is on axis with the new glass doors and existing windows beyond is a key highlighted moment of the project.

The custom laboratory casework design utilizes a simple palette of maple and white metal further increasing the brightness of the space. The casework design allows for flexible rearrangement of the tables in the biochemistry area, future tools in the maker space and future experiments to be installed in the basement unit operations laboratory area. This approach further allows for the multiple and changing uses of this suite of spaces. 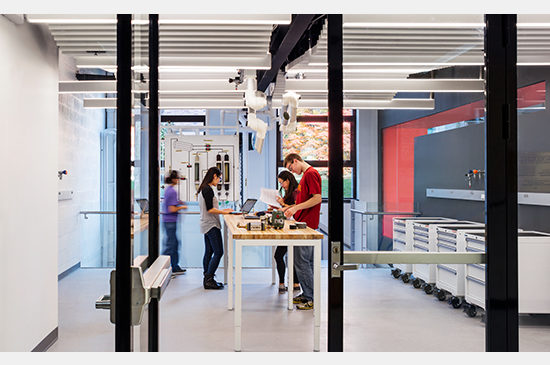 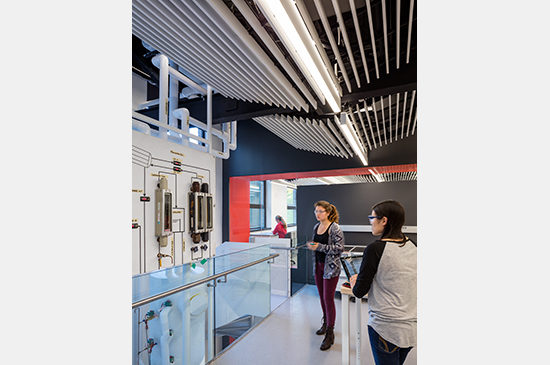 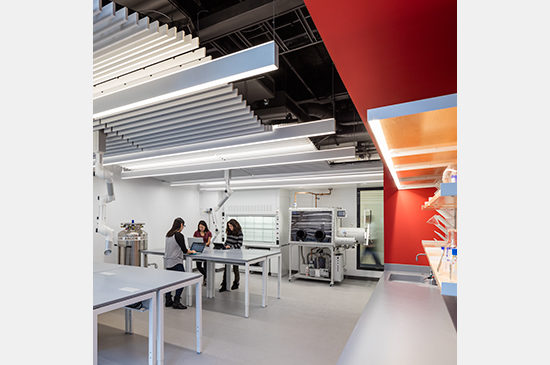 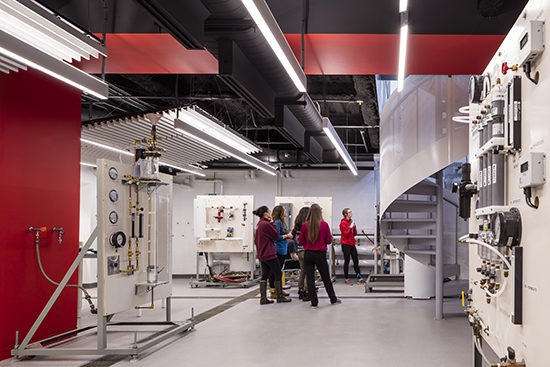 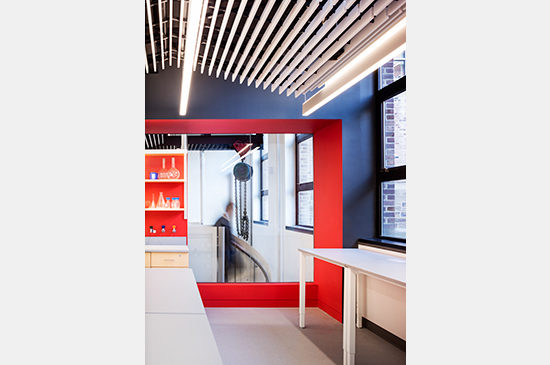