Engineering education has a great tradition of student-led projects for such competitions as solar cars and autonomous vehicles. These were often created in the odd residual basement spaces within existing engineering complexes. More engineering schools, however, have seen the great intellectual value in bringing these spaces to the forefront and celebrating their use.

The success of such project-based spaces lies in the programmatic adjacencies that support this approach. In addition to open assembly areas, the modern makerspace must have access to traditional wood and machine shops, as well as new prototyping instruments, such as 3D printers and CNC routers that use computer technology to drive the fabrication effort. Not unlike architectural programs, engineering students are not just making but also designing. Therefore, it is important to also develop cohort space, as these spaces become the home for engineering students, as well as a place for the design effort.

Ideally, makerspaces are close to the technical support spaces, ensuring continuance between the conceiving of an idea, its formulation in a computer model and its execution in a fabrication event. The opportunity to have bigger spaces adjacent to the studios, where students can physically assemble components of engineering systems in a team environment, is essential in developing the social and collaborative skills essential in modern engineering design.

The connection of these spaces provides students with the tools necessary to turn an idea into a tangible prototype. This concept was also the fundamental premise for development of the Skolkovo Institute of Science and Technology. Built upon the academic framework of Conceive, Design, Implement and Operate (CDIO), the campus space is planned to provide ubiquitous access to student cohort project space within the top floor of each of the campus’ research bars. 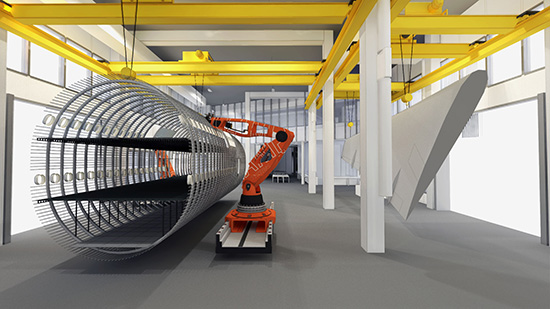 View of the makerspace at Skolkovo University

Another project which featured makerspaces is our renovation of Cornell University’s Olin Hall Chemical and Biomolecular Engineering Unit Operations Laboratory (UO Lab). The space is home to a senior level capstone course in the University’s undergraduate curriculum. The UO lab makerspace with its vibrant dark grey and red color palette is close to the technical support spaces and gives students a connection between the classroom and the real world. 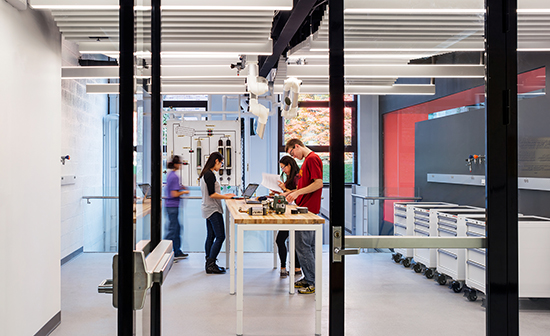 View of the makerspace at Cornell University

These spaces are primarily focused on the conception and design of student projects. The project spaces have direct connection to a series of support cores, which provide access to high bay space, machine shops, rapid prototyping and others, in order to enable the final steps of the process: implement and operate.