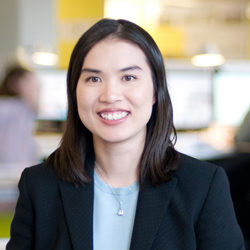 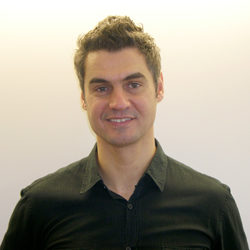 Although 245 Beacon Street has been open since January, hosting hundreds of classes, research projects and study sessions, only recently did we have the opportunity to gather with the Boston College community to celebrate the official unveiling of this building.

Emilio Cardarelli, DESIGNER  Having watched the building rise from the ground over the span of two years, I always get excited seeing it situated in the campus landscape amongst its gothic relatives. Even though it is a new building it presents itself so eloquently by honoring the other buildings around it without causing any disruption to the context of the campus. Some days when I visit the site, it does not feel like a new building, but rather as though it has always been there.

Edin Kostovic, DESIGNER  This was a dynamic and meaningful event. The evening was broken into different sessions, each with its own format; starting with the introduction, followed by panel discussions, and ending with the president’s remarks and keynote speech. Segments were unique and drew upon personal experiences which made it very interesting to listen.

The more formal part took place in the Payette-designed auditorium and was followed by a social gathering and dinner scattered along the monumental stair, effectively encompassing all levels of the building. I thought this was a smart way to relate the event with spatial experience, allowing everyone to experience the building while having conversations and socializing.

I also must mention the students who organized the event. Everything was planned well to the smallest detail, culminating in small gift for all participants. Symbolically, the gift was a set of drink coasters made by BC students in the new Maker Space, which was at the heart of the event. 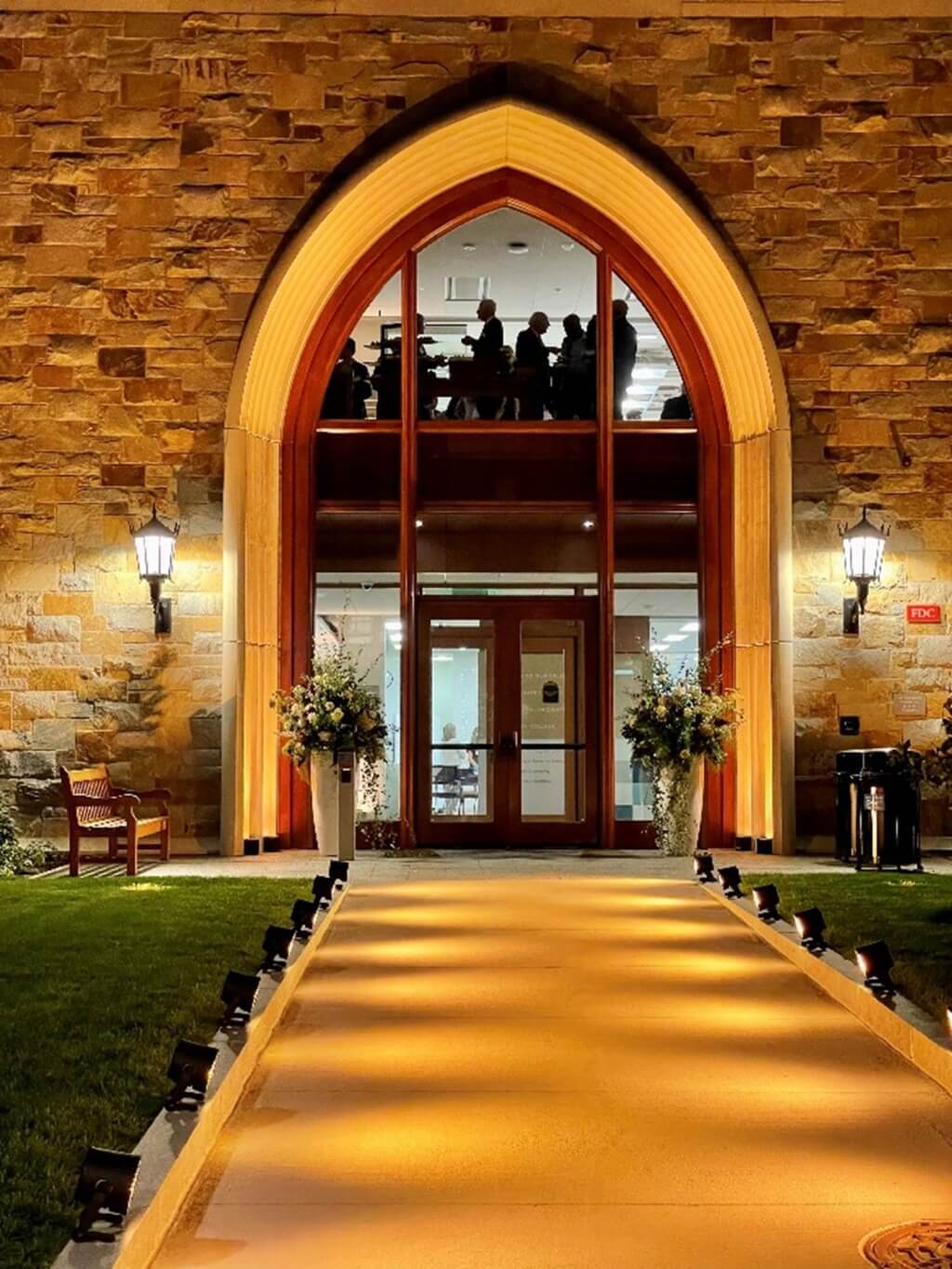 Guests gathered at the collaboration spaces seen through the two-story arch at the front entry.

What excites you the most about the official opening of 245 Beacon?

Diana Tsang, Project Manager  I have been looking forward to this event for almost 5 years, ever since I joined the team in 2017 during the initial programming phase! This night brought together so many people I have known through the process, they are all so inspiring, through their amazing research, their teaching aspirations, their vast project management experience, their vision and persistence through this long complex journey. The comment I heard the most at the event was, “Do you remember how many meetings we had on THIS (pointing to an operable partition or a casework table)?” We all had a good laugh – it is all worth it now.

EMILIO  Though the building has been open since January 2022, I feel this event was an important milestone. It brought together everyone who had a role in the building’s incorporation, planning and funding. They were now able to see it complete. I was filled with excitement as I waited impatiently to hear the various presenters talk about and showcase the building. Witnessing drawings come to life is one of my favorite aspects of being a designer, the other is watching people occupy and use the space. There is nothing better than seeing people enjoy the space and environment you create, and this event helped solidify that.

Edin  Probably understanding how our work fits into larger mission of the College. While designing and following construction we are focused on our daily job, doing everyday things, and doing the best job we can. Satisfaction and perspective are somewhat personal, or team related. What was a revelation for me is how what we have done fits into one much larger mission. I simply did not have that lens of looking at the project before. This event made it clear how the job we have done enables BC to take a leap forward and set itself up for future growth. It is more than just a well-designed facility, it becomes a tool for the College to set itself for years ahead, which I think is invaluable. 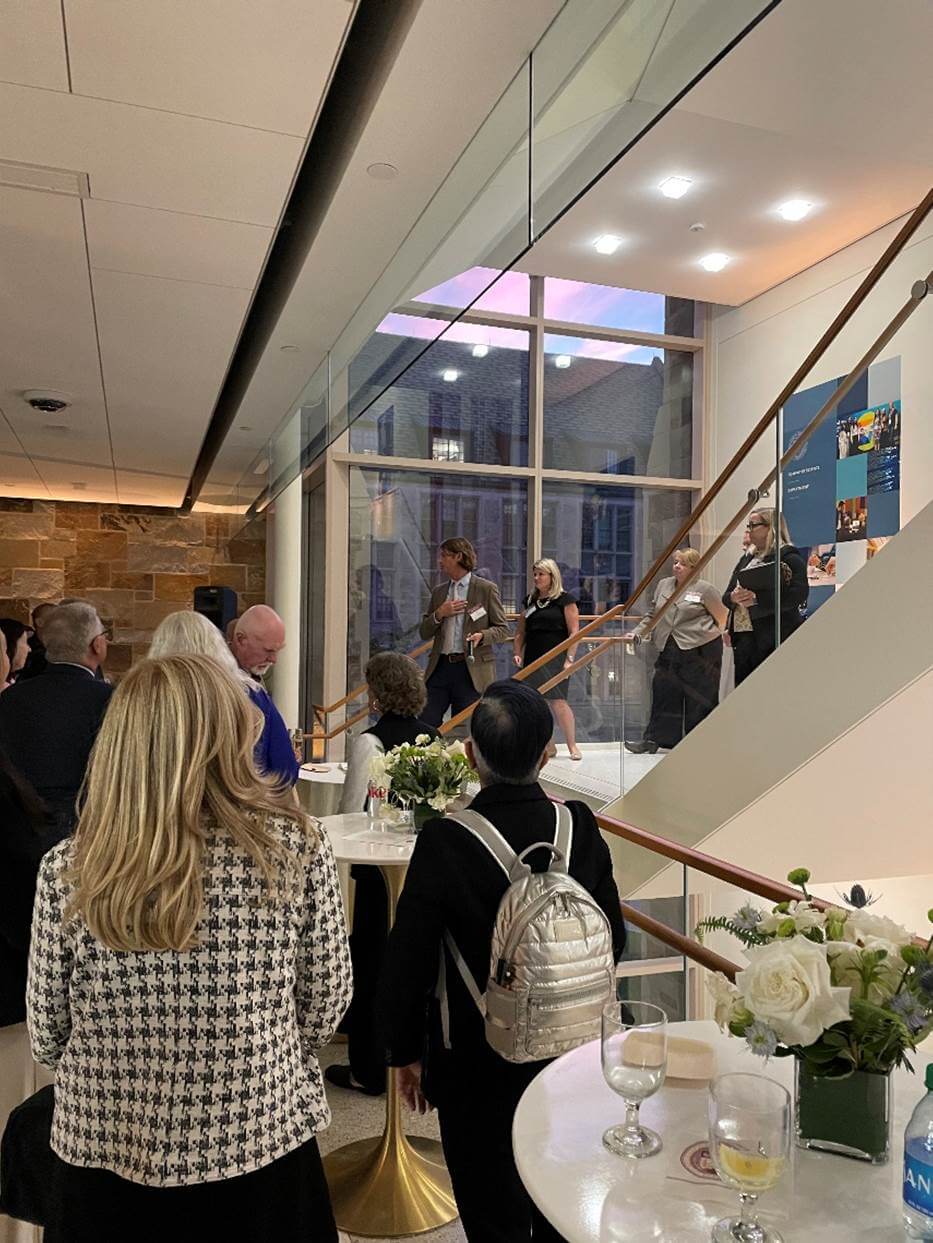 Most inspiring moment of the event?

Emilio  There were many exciting speakers at the event, including Fr. Leahy, President of Boston College; Paul Romer, Nobel Prize Winner in Economics; and Phil Schiller, donor for the Schiller institute for Integrated Science and Society at 245 Beacon. In addition to these presenters, there was a panel discussion with the newly hired science and engineering facility staff. This was one of my favorite parts of the night because we got to hear their stories, the research they do and why they joined Boston College. It was very touching to hear the excitement they had for the new building and how they envision the space will foster the research they do.

EDIN  I enjoyed meeting a variety of people and learning about what they do. 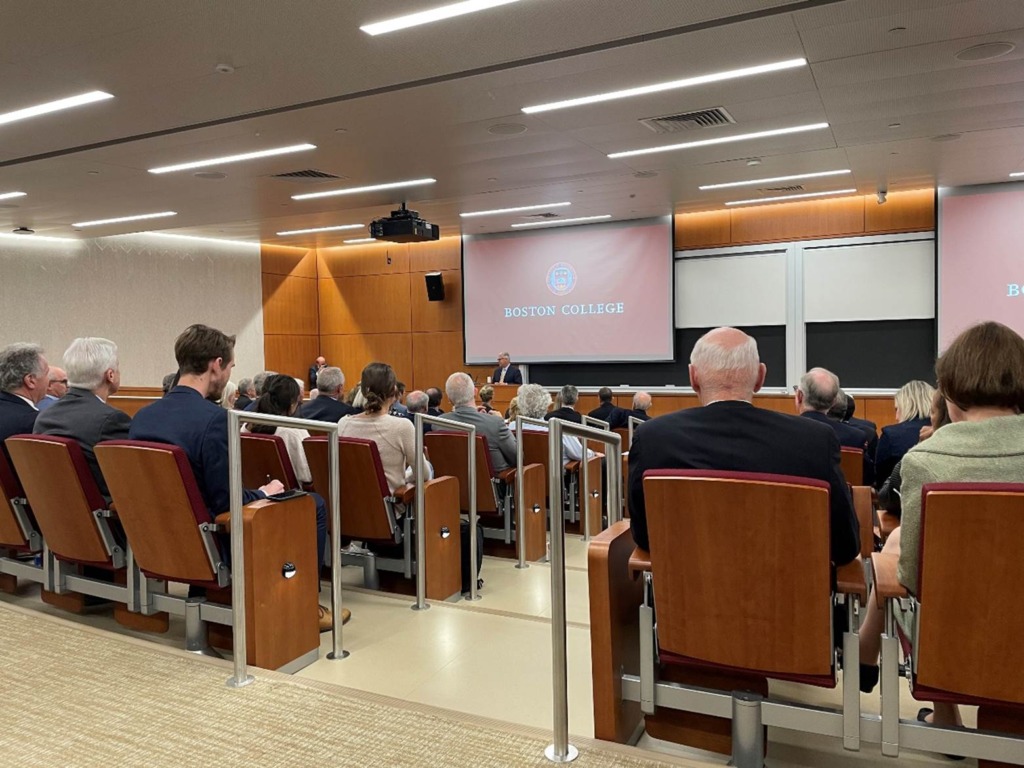 Panelists addressed the research and teaching made possible by the new state of the art facility.

Emilio  Following the keynote address there were guided tours of the building and interactive experiences where students showcased their work. These were students who used the new spaces within the building, so it was extra special to see projects they created.

Edin  It was interesting how building and space in general is perceived differently by different people. This is somewhat determined by our role or level of engagement with it. To me it was refreshing how each speaker singled out something very personal about the building, looking at it through their own experience. While the president symbolically called the building a ‘crossroad’, one faculty member singled out how the building enables them to teach in a particular way.

DIANA  The building’s mission to support education and research that deals with complex problems in society has always intrigued me. There are really no boundaries to what can be done and what needs to be done. The design of the labs reflects this goal, as panelist Avneet Hira, Assistant Professor of Engineering, noted, “There are no boundaries between the labs.” She also noted students’ sense of belonging in the space can impact sense of belonging in the fields they are pursuing. I am especially pleased with the success of the University Makerspace, now known as the Hatchery, which welcomes anyone with any idea from around campus. By creating inclusive spaces, we are creating a crossroads, as Fr.Leahy described the essence of the building in his speech. 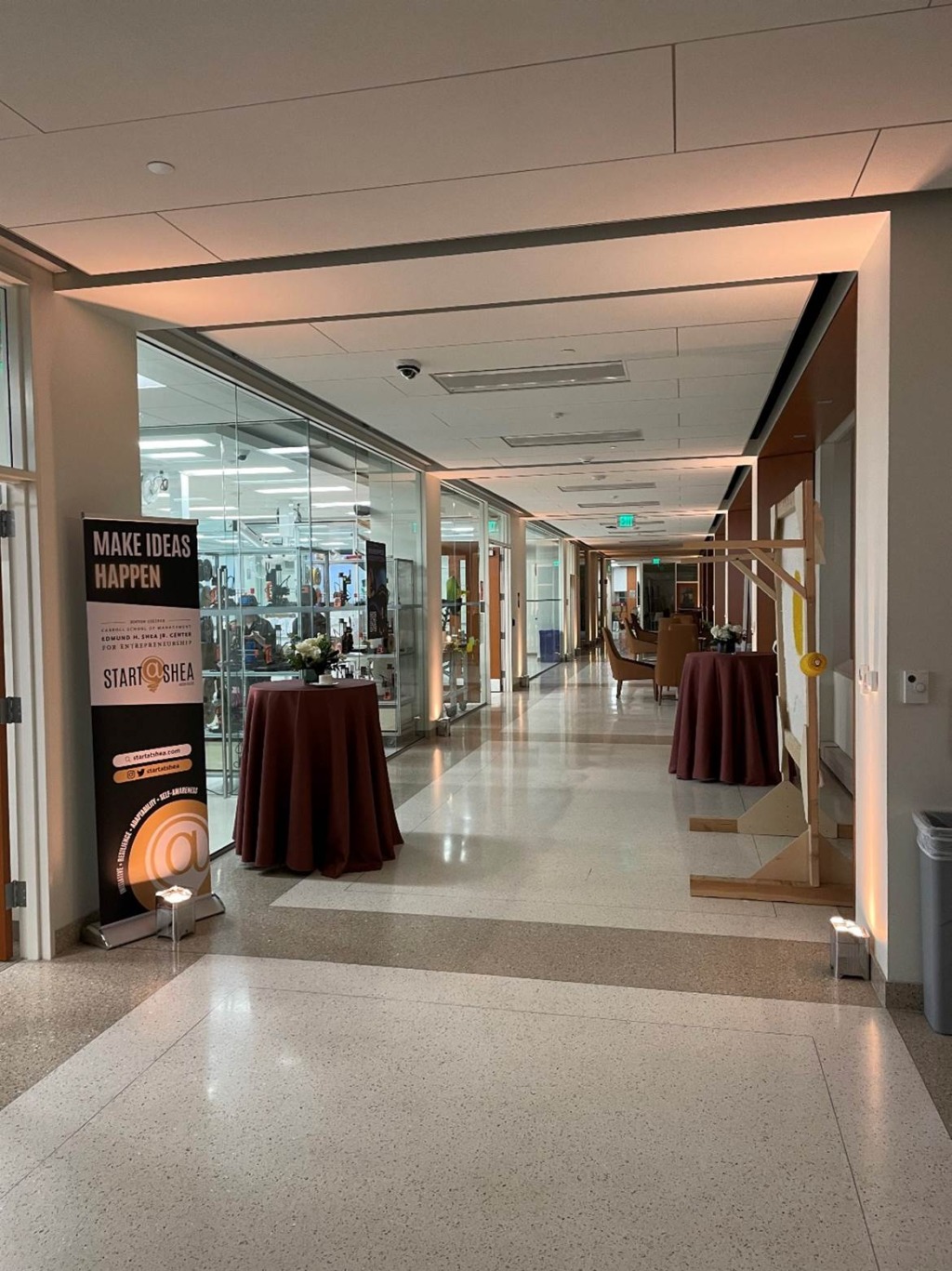 Make Ideas Happen! – at the Shea Center for Entrepreneurship

Any final thoughts and feelings now that the building is officially open?

Edin  It was great to be a part of this team. It was a long journey, but seeing the final product so well received makes it very rewarding and worth the effort.

EMILIO  It was wonderful to be back in the building again, seeing it full of life. Even more special to be there together again with the team. After having spent many hours, days, meetings and site visits together when it was under construction, being there together admiring it officially completed was surreal.

DIANA  Of course this was a moment to celebrate with the dedicated Payette team. We persevered through the early COVID days when we could not meet in person but made things work with creativity and optimism, and we all came out as better and stronger architects. 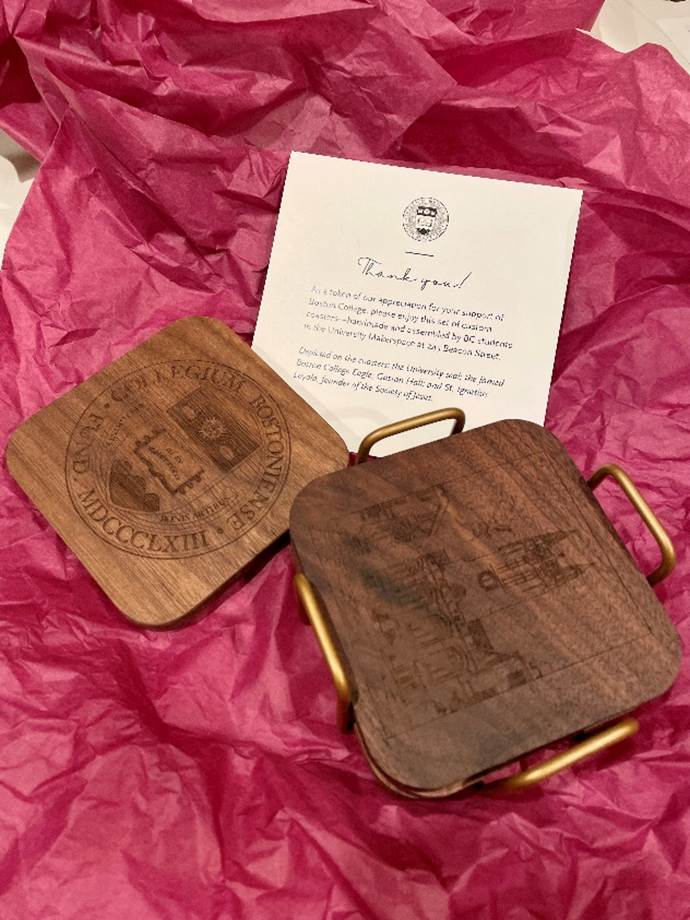 Guests of the opening ceremony received set of custom coasters, handmade and assembled by BC students in the University Makerspace at 245 Beacon.

Behind the Scenes: 245 Beacon Street Photoshoot