First, let’s define what I mean by “placeholder” as it relates to architecture: 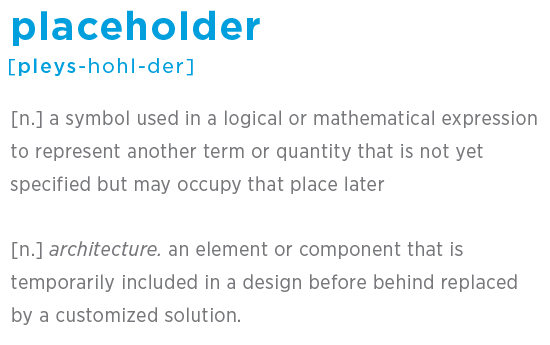 Placeholders are typically familiar components intended for replacement when given further consideration. Placeholders are often derived from one’s experience and memory of prior projects and the component is considered suitable as a temporary application for the particular design intent. For instance, even the earliest diagrams and sketches generated in a design investigation rely on placeholders to represent basic architectural components. Placing building forms on a site plan rely on blocks of certain dimensions assumed suitable for the intended use.

More detailed sketches and block models begin to identify blocks of program as “solid” with public space/circulation as “voids.”

The width of program blocks is usually based on past experience about what works. For example, 75’ is a common lab block width, allowing enough width for a flexible floor plan while keeping perimeter windows available to most of the floor. This is a starting point we often use as a “placeholder” as we explore different aspects of design. In our case of the lab block, the building width evolves with deeper investigation of the program and myriad building systems.

During the early design, the floor plans of lab buildings respond to internal planning ideas and functional requirements, especially the basic lab block, which leads to intentionality in the design, removing placeholders. Drilling down to the contents of the lab block, we see placeholders in the assumptions about casework and equipment. In order to convey how the lab block will look and feel early in design, we need these placeholders, but further consideration about these components commonly waits until later in the design process.

Notions about the building’s materials begin with placeholders as a basis for the intended image and to establish a baseline for cost modeling. Assumptions for components such as brick cladding and Kawneer curtain wall are intended to be reinvestigated as the architectural concept evolves. In addition to cost modeling, early assumptions and placeholders allow us to better model the energy performance of the building, which also informs design decisions.

So… when and how do we know when we have eliminated all of the placeholders? They appear plausible because they are!

As I think more about the role of placeholders, I think about the balance between building on past experience and pushing the boundaries to find the next great idea. All placeholders need to be rigorously explored. It’s never enough to assume a team member ‘wanted it that way.’ Questioning design choices is essential. Always ask why. We always strive to explore novel and innovative designs, but the practical realities using Revit models demand specificity early, which feeds into demand for placeholders. Placeholders are reasonable, but because we slot them in early, hardly ever are they the exact right choice. All this leads me to think – placeholders, you can’t avoid ‘em but be sure to move ‘em out before they get memorialized!

So, when you look at your current projects “on the boards,” how many placeholders can you identify?