As part of our commitment to the environment, Payette signed the AIA 2030 Commitment in January 2011 with the goal of designing carbon-neutral buildings by the year 2030. To reach that goal, the AIA has outlined interim reduction targets in Energy Use Intensity (EUI), and the current target is to reduce the predicted Energy Use Intensity (pEUI) of our projects to 80% below the national average based on building type and climate.

As reported the recent AIA COTE 2030 By the Numbers report, in 2020, 378 firms reported data to the AIA on approximately 22,000 projects across 102 countries, with an average pEUI savings of 51%. In the same year, Payette achieved an overall 66% reduction in pEUI. Three of our reported projects (representing 20% of 2020 whole building projects) exceeded the 80% target threshold. These included the Frank and Maureen Wilkens Science Center at Cape Cod Community College (100% or net zero), The College of Engineering West 2 Building at Penn State (83%), and a lab project for a confidential client (81%). Four others, including the New Molecular Life Sciences Building at Wesleyan University, the EXP Research Building at Northeastern University, the Interdisciplinary Science Building at Louisiana State University, and the Hesse O’Brien replacement building at the University of California Berkeley were very close to meeting the target at 78% savings each. We are excited about our project performance to date, working toward all projects meeting the 80% target in the coming year.

REDUCTION IN ENERGY USE INTENSITY
The AIA 2030 Commitment measures interiors projects by their achieved Lighting Power Density (LPD) reduction compared to ASHRAE 90.1-2007, with a goal of 25% savings. Payette’s interiors projects achieved an overall reduction of 45%, a significant improvement over our 2019 performance of 35% savings, and significantly better than the industry average of 30% reduction in LPD. 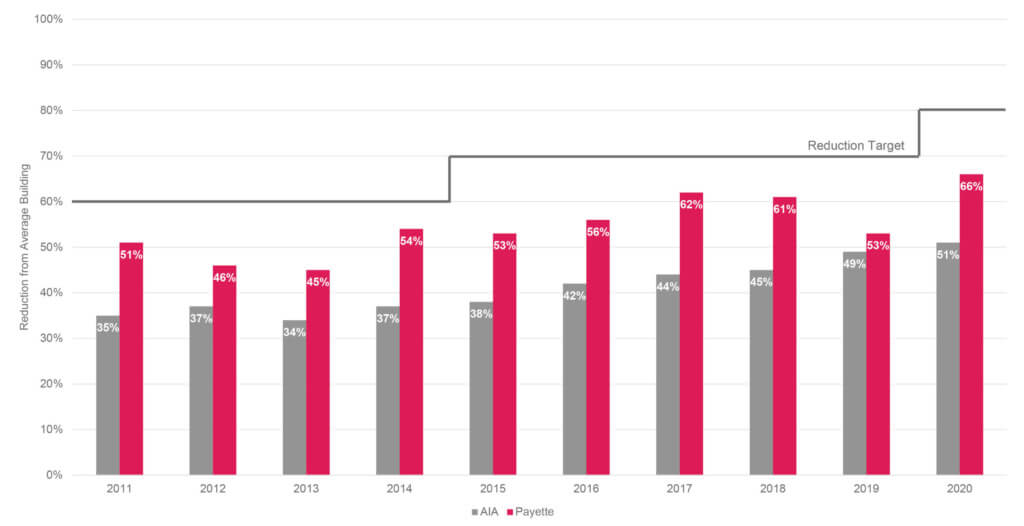 Reduction in Energy Use Intensity

LIGHTING POWER DENSITY REDUCTION
Energy modeling is a critical strategy for reducing energy consumption in design. According to the AIA report 2030 By the Numbers: The 2020 Summary of the AIA 2030 Commitment, modeled projects reported a 20% better EUI reduction than non-modeled projects. Payette has a goal of energy modeling all projects. In 2020 we modeled 84% of our projects (on a GSF basis), compared to the industry average of 77%. 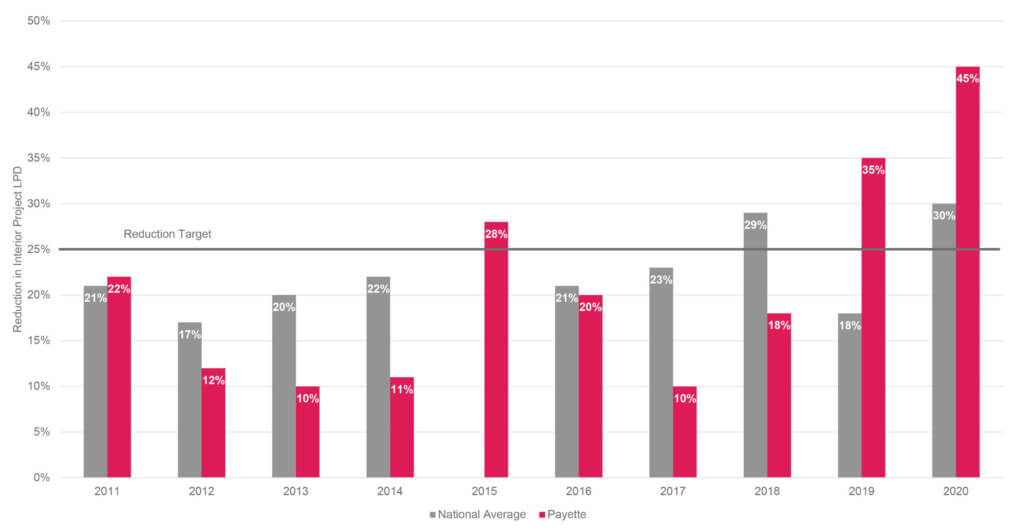 PROJECTS WITH AN ENERGY MODEL
The 2020 Summary of the 2030 By the Numbers report began tracking three new and growing trends in the building industry in 2020, a move toward electrification, growth in use of renewable energy, and consideration of embodied carbon of building materials in addition to operational carbon savings. The report states that

• Firms reported 302 all-electric projects, and another 367 projects that received at least 75% of their energy from electric sources.
• Over 700 projects included on-site renewable energy, the most popular of which was onsite solar PV.
• 55 companies reported embodied carbon on 291 projects (including 4 Payette projects!) representing 1% of all projects reported.

While passive design and energy efficiency are critical, reaching the 80% reduction goal and toward carbon neutral requires leveraging these additional strategies to minimize emissions from buildings. 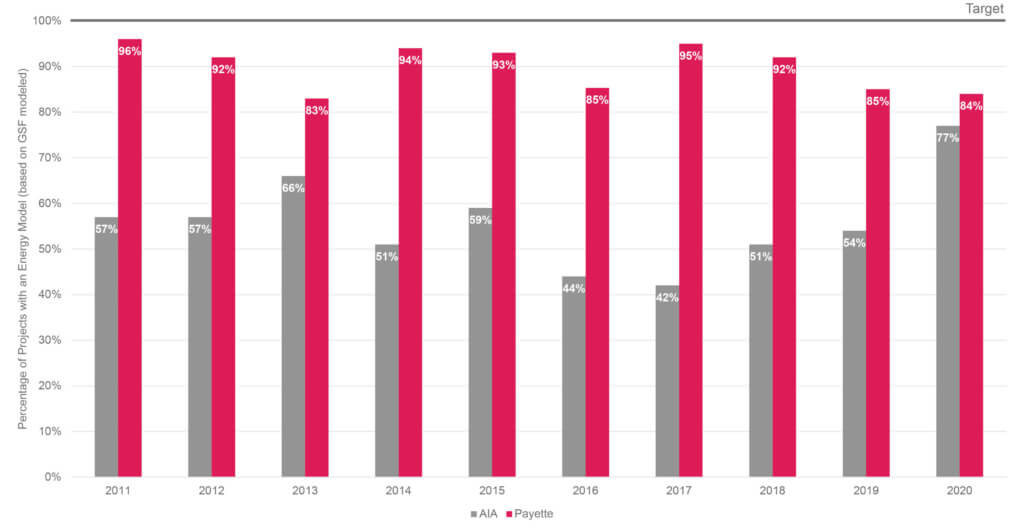 Projects with an energy model