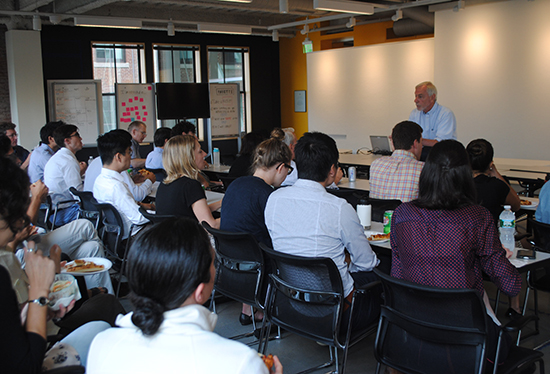 Payette’s Young Designers Core (YDC) recently hosted a series of events focused on mentoring. Dr. William Ronco from Gathering PACE Consulting visited the office to share his views on mentoring. He spoke about what he has coined “Do-It-Yourself Mentoring,” a successful alternative to traditional, prescribed mentoring programs. DIY mentoring puts the responsibility of organizing an effective mentoring relationship in the hands of the mentee. It is important to take advantage of the relationships DIY mentoring can create as they can help the mentee gain useful information and perhaps a career advocate.

Payette, like many other firms, previously utilized a traditional mentoring program where new employees were assigned mentors. While many successful mentoring relationships came about because of this program, there were two major flaws with the system: 1) it was time-consuming for the staff members who assigned the pairs and 2) despite all the research and care that went into matching people, some of the assigned pairs did not “click.” Unfortunately, this is a common ending to many mentoring programs.

For future generations, DIY mentoring is likely to become a more successful way to engage in mentoring relationships. DIY mentoring places the responsibility on the mentee to choose a mentor after informally meeting several “candidates.” This enhances the probability that the mentee and mentor “click.”

Dr. Ronco has consulted for hundreds of companies across a variety of industries which are concerned with mentoring. Over the years, he has consistently found that potential mentors (PoM’s) are happy to take the necessary time to meet with mentees. However, many of these PoM’s are unsure of what it means to be a mentor and don’t know the necessary steps to develop an effective mentoring relationship. According to Dr. Ronco, “they wonder what the most relevant topics for discussion are; they don’t know what the expectations are for the relationship.”

Dr. Ronco recommends that the mentee approach a potential mentor and ask to have a mentoring discussion. This does not mean asking the PoM to officially “be their mentor” straight off the bat. Indeed, it is analogous to dating. One does not ask someone to “go steady” before the first date. In fact, many dates may go by before you explicitly define your relationship, or you may never explicitly define the relationship.

When approaching a PoM, it is helpful to provide an informal agenda so that both parties have a general idea about what will be discussed. Suggested topics include job performance, career development, job changes and critical skills. For the meeting location, it can be beneficial to get outside of the office for a more informal feel.

After the first meeting with a PoM, ask to set up a follow-up meeting in 4-6 weeks. (Dr. Ronco believes that 2 months is a bit on the long end in terms of building momentum and keeping the topics fresh in one’s mind.) As time goes on, both parties should track the process to make sure that expectations on both ends are met and to refine the process as appropriate for both the mentor and the mentee.
The mentoring relationships that are developed through this process can play a crucial role in one’s career. Receiving support from someone who cares about your development leads to better decision-making and even career opportunities. This is relevant not only for the mentee but also for the employer, as it leads to more engaged, successful young leaders. Lastly, the interactions and opportunities that come about from participating in mentoring relationships are usually enjoyable and fun!

Payette’s mentoring series has also included a panel discussion and a “speed mentoring” event to facilitate many new relationships within the firm.