A couple of weeks ago a few of us had the opportunity to visit two renowned Stem Cell research facilities as precedents for our ongoing work. Harvard University’s Sherman Fairchild Building, originally built in 1981, was one of the first biochemistry buildings in the world. The Whitehead Institute, founded in 1982 and completed in 1984, quickly followed. The Sherman Fairchild Building is actually a Payette building, which the firm recently renovated. The renovation design process introduced many innovative solutions, such as integrated bench lighting and sliding glass doors to the lab spaces. The Whitehead Institute was designed by Goody Clancy in the 80’s and has not undergone any major renovations.

It is important to note that the original design of these two research centers was very similar in concept. Comparing the two allowed us to examine the evolution of biomedical facilities over the past 30 years and understand these two buildings. 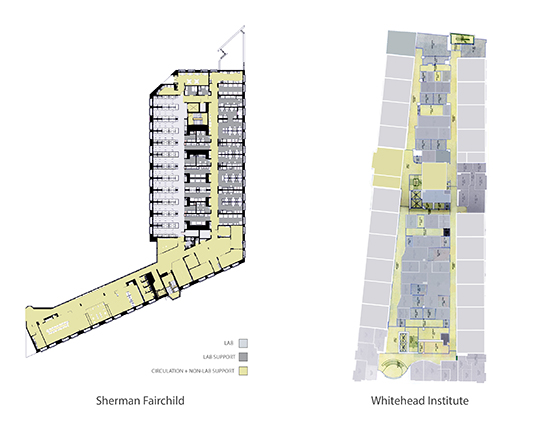 The newly renovated Sherman Fairchild Building for example, now has an open lab layout with tissue culture rooms located along the exterior envelope with access to natural light and shared equipment in the center of the building. The Whitehead Institute, on the other hand, has a racetrack layout with 500 small lab modules on the outside and shared facilities located in the center of the building.

Researchers at the Whitehead Institute were very happy and enthusiastic about their work space, though from a contemporary esthetic perspective, it left a bit to be desired. They emphasized the internal door connections between the laboratories which allowed for collaboration between different labs while accommodating the need for privacy to speak loudly and listen to music in smaller groups.

Both facilities have write-up areas by the windows and with working benches connected to them. Labs at the Whitehead Institute all included fume hoods while at Sherman Fairchild they became part of the shared core in fume hoods alcoves, thus maximizing the number of users that the laboratory could facilitate. At Sherman Fairchild the most used spaces (tissue culture rooms) are located near the exterior envelope with access to windows, which allows for a visual connection to the corridor through a fully glazed separation. Overall, this design strategy created a pleasing and open atmosphere.

Both buildings serve the needs of the researchers. They are both loved and seen as models for success. So, which one is better? There are lessons to be learned from both. The challenge of modular, compartmentalized design with little or no glazing between spaces promotes great inward focus, but does not create as many opportunities for cross-collaboration. On the other hand the open plan emphasizes greater awareness for exchange, but at times compromises the sense of privacy. Moving forward I think it will be important for us to consider a balance between a space that can provide both privacy and openness for collaboration. 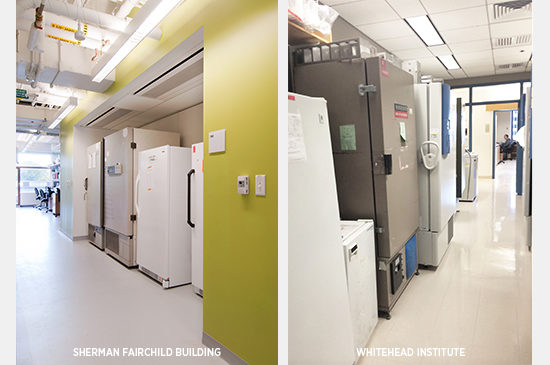 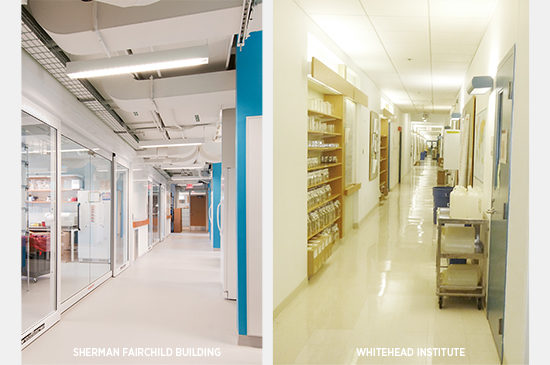 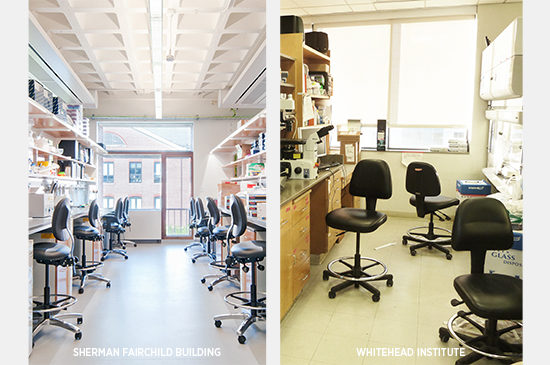