Last week I had the rare and wonderful opportunity to attend this year’s International Climate Summit (COP21) in Paris, France. The experience was eye-opening on many levels and so I’ve structured this recap as a progression from my personal experience to the far-reaching international scale of the conference.

To begin on a personal level, it is first important to note that the conference itself consists not only of the well-known 2-week dialogue between the most powerful leaders of the world but also includes hundreds of events throughout the hosting city; with climate-sensitive building design being a major topic of several events. I was honored to contribute to these events primarily through the teaching of several urban design masters students from the New York Institute of Technology (NYIT). The students were at the conference to complete their final degree requirements, which involved presenting their research and climate-sensitive design proposals for different locations in Paris. 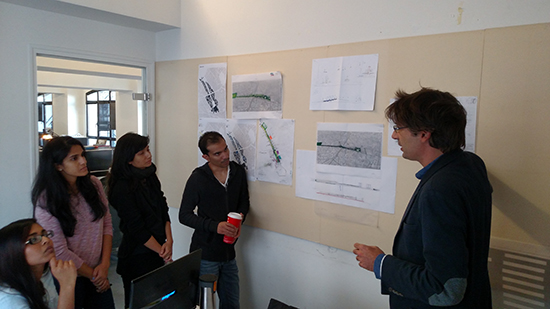 The teaching sessions that I led not only enabled me to finance the trip but also afforded a unique opportunity to add several new features to the Ladybug software suite I contribute to and regularly apply here at Payette. Specifically, these features related to issues of urban microclimate, heat waves, climate change and urban heat island effect.

Among these new features that will inform our future work at Payette is the ability to easily incorporate data from “actual years” when simulating building energy use. This is opposed to the standard “typical years” that the building industry commonly relies upon. For the NYIT students, this enabled the use of climate records from the 2003 European heat wave – a tragic event that resulted in over 70,000 heat-related fatalities across France – and served as a primary design constraint for the students. 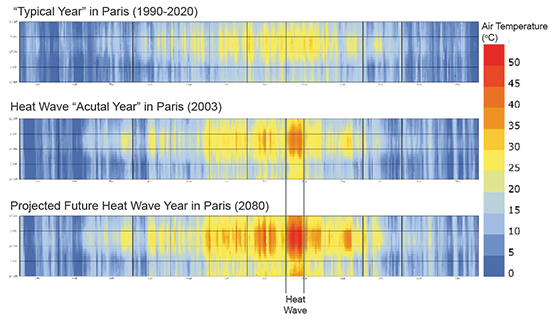 The students studied the conditions of the heat wave, including humidity, wind, and solar radiation intensity, in order to develop guidelines for their proposals and used this “actual year” weather file to model the response of their building proposals in such a heat wave event. Additionally, students connected to the Intergovernmental Panel on Climate Change’s (IPCC) global climate model (GCM) database. This connection enabled the students to warp the data of the 2003 heat wave to estimate the conditions of a similar heat event in 2080. This estimated 2080 heat wave, which used the anticipated climate change scenario that the world leaders have currently agreed upon, saw the peak temperature of a Paris heat wave elevated from 104 F in 2003 to an inhospitable 122 F in 2080. This terrifying result in conjunction with the 70,000 deaths that occurred during the 2003 heat wave underlines the urgency with which both mitigation and adaptation strategies must be pursued in our architectural community. These two capabilities will enable design professionals to assess our designs not only for the typical climate of the past but also for extreme events and for the climates of the future.

Another set of software capabilities developed for the event involved importing thermal satellite images from NASA’s extensive database into the Rhino/Grasshopper environment. This allowed the students to obtain a sense of thermal variation across the city of Paris as well as many other cities of interest. 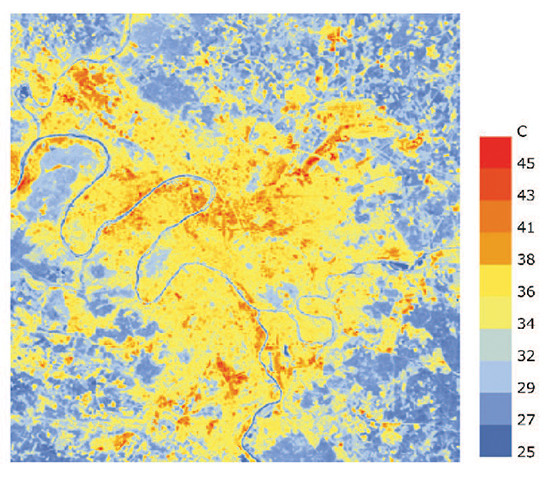 The identification of parks and water features as the coolest spots of the city in these images helped shape the application of strategies in the students’ final proposals. Finally, the effectiveness of their designs were evaluated using a connection from Ladybug to the MIT Urban Weather Generator, which warps climate data from rural areas and airports to reflect the conditions of a city street. With this final capability, students could understand how well the urban design proposals were mitigating or worsening the effects of a 2080 heat wave in their proposals. 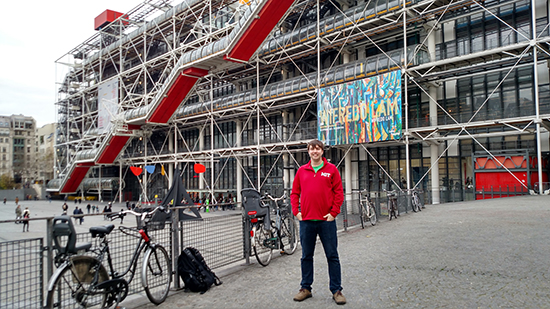 Moving from my personal experience to the level of the city of Paris, this trip was not only an opportunity for me to round out an architectural education that has referenced over a hundred Parisian buildings but also enabled me to see how the local architects in Paris are addressing issues of climate change. In some technical aspects, Paris is far ahead of US cities like Boston.

Notably, the extensive and creative implementation of efficient LEDs in practically every building and a robust completely electric car-sharing program are features that are not likely to be matched by a city like Boston for another 5-10 years. Additionally, many recent Parisian building designs exhibited a strong sensitivity to the climate, employing façades with a high level of dynamic usability in terms of operable windows, moveable exterior shades and occupiable balconies. 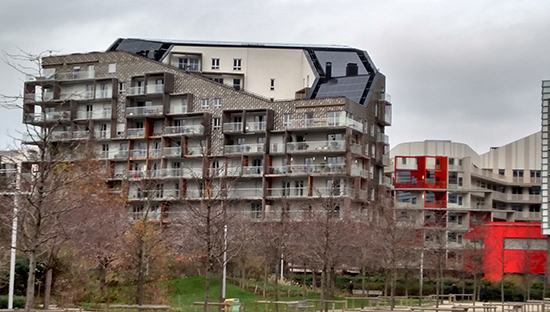 However, an issue that struck me (and seemingly many local Parisian architects) as problem to address in regards to the sustainability of the city is the continuing disconnect between the historical, low-density “museum city” that occupies the center of Paris and the high density “contemporary city” that encircles it. Much in the way that cities like Denver are encircled by a ring of mountains on their horizon, Paris is encircled by a ring of high rise buildings that represent development at the fringes of the historic center to preserve historic character. 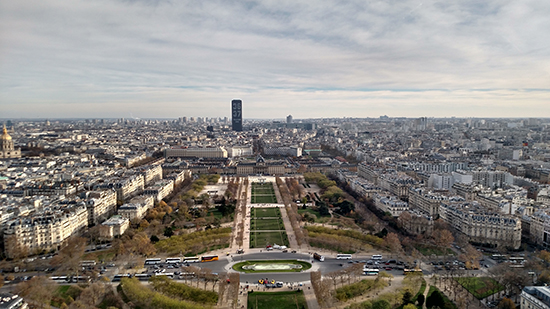 This disconnect has prevented the greater city of Paris from having a dense and sustainable city center, forcing its transportation networks to be more dispersed and the embodied energy of its infrastructure to be greater. After attending a COP event by the “Gran Paris” organization, which had mobilized the Parisian architecture community to address this issue of a regional Paris, the effects of the disconnect on the sustainability were readily apparent. However, while the organization had mobilized the architectural community on the issue, there seemed to be a general sentiment that a better engagement with the public and with the policy makers was necessary in order to bring real changes to the city.

Finally, looking towards the international scale of the conference, the character of the event as a whole was very different than what I anticipated after following the past 7 climate conferences remotely. Particularly, the scale and amount of resources afforded to greenwashing events in relation to that afforded to groups attempting to raise awareness of the issues of climate change was staggering. To highlight this difference, it is perhaps clearest to note the space allotted for automobile and fossil fuel pavilions at the conference in contrast, throughout the conference, a ban has been placed on all climate related protest and gathering. I observed several locations where the police had closed off parks and squares to the public for this reason. Resources were employed throughout the city to safeguard and protect the advertising pavilions of fossil fuel companies. This is one example of the deep systemic political and economic challenges that an effective solution of climate change must address.

To bring the issue back to our architectural community, we should perhaps examine where we place our efforts in relation to this. When we look for new technical solutions to address the issue of climate change, how can we discern a genuine contribution to addressing the problem from an impractical proposal that distracts from the primary discussion? When such distraction is amplified louder than the voices of others, how can we assist those who are being silenced? With this thought, I conclude with one example of Paris of designers who are struggling with these questions. While this simple acknowledgement of the problem is still far from a solution, it is a first step towards addressing it. My experience during this past week has helped me acknowledge these issues and obtain a better understanding of what must be changed.

For further reading on COP21, check out Democracy Now.