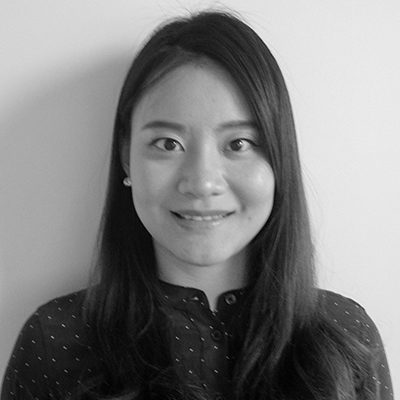 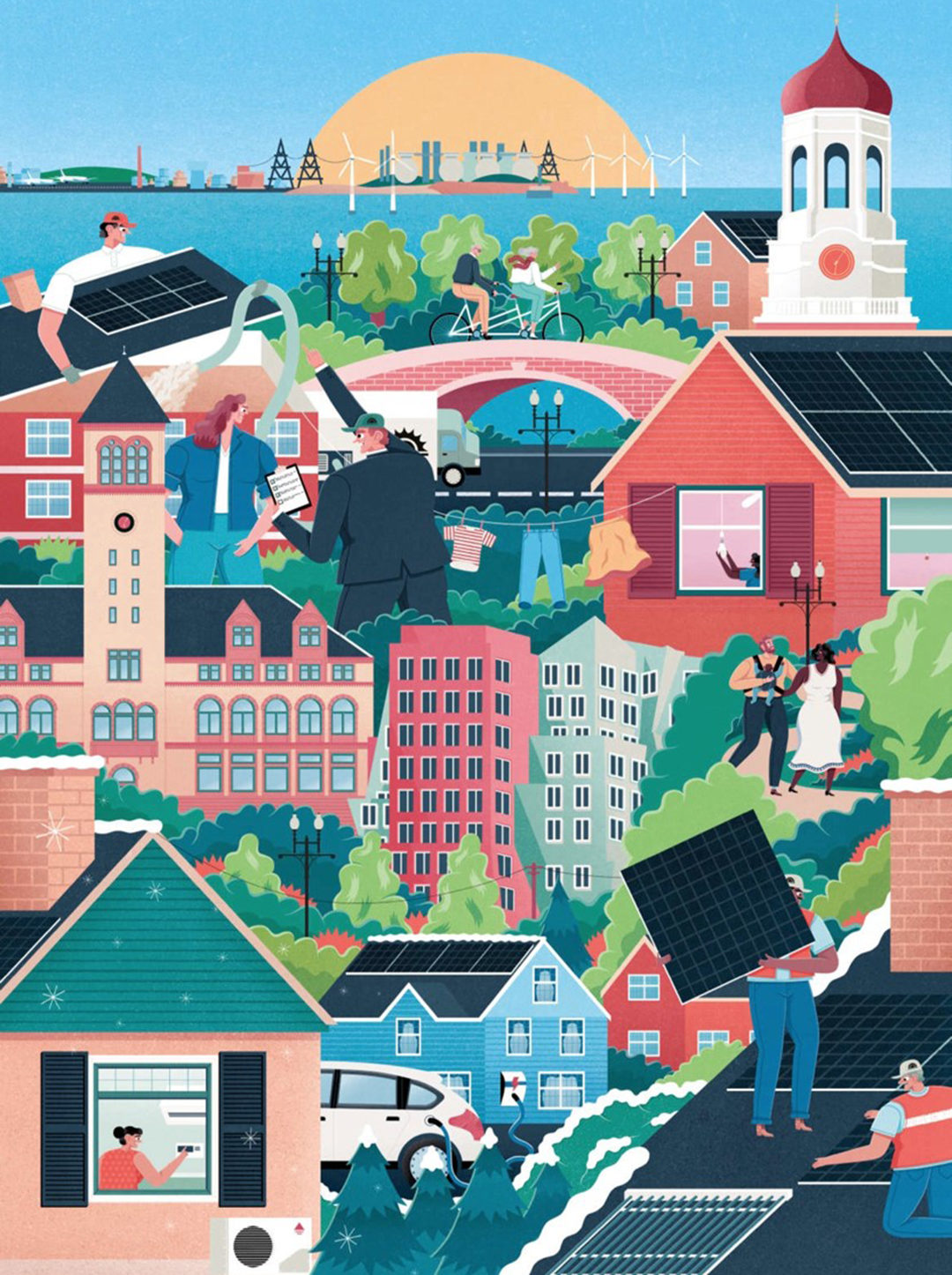 Cambridge is officially on the path to becoming a net-zero community. City Council unanimously adopted the Net Zero Action Plan, a 25-year plan that addresses both new and existing buildings and includes target dates for reduction of greenhouse-gas emissions from buildings in Cambridge.

Last month, Henrietta Davis, former mayor of the city of Cambridge, led a presentation on Cambridge’s net zero action plan. An advocate of energy efficiency and sustainability, Henrietta has been a driving force in pushing the city to implement policies to alleviate environmental issues. She shared insights about the city’s planning progress towards energy reduction and the task force within the city and around the nation. She also presented the Cambridge Net Zero Action Plan, which outlines strategies to create a net zero city by 2040. I was greatly inspired by her continuous commitment to green building and was intrigued to learn about the strategies to promote energy reduction from the political perspective.

Research has shown that improving building energy performance is critical for reducing overall energy consumption. According to data provided by the U.S. Energy Information Administration in 2012, buildings accounted for 44.6% of CO2 emissions in the U.S. and buildings were the largest single contributor. The built environment is closely related to the local economic and political context and has a direct impact on the community. This means cities can become active agents to improve building energy issues through city planning and policies specific to the area.

The City of Cambridge has been continuously involved in green building over the decades and has achieved several milestones throughout the planning process. In 2002, the City Council approved the Climate Protection Plan. In 2012, the city adopted the Net Zero school policy. In 2013, the city formed the Getting to Net Zero Task Force, which includes Henrietta and Payette’s Andrea Love, to map out a clear plan to create a net zero community. Over 15 months, the group developed research, early action items, as well as public and stakeholder input. Drawing from the extensive research on building performances in several cities nationwide, the group proposed the Net Zero Action Plan to develop specific, feasible short term and long term strategies and detailed action plans to achieve energy reduction by 2040. 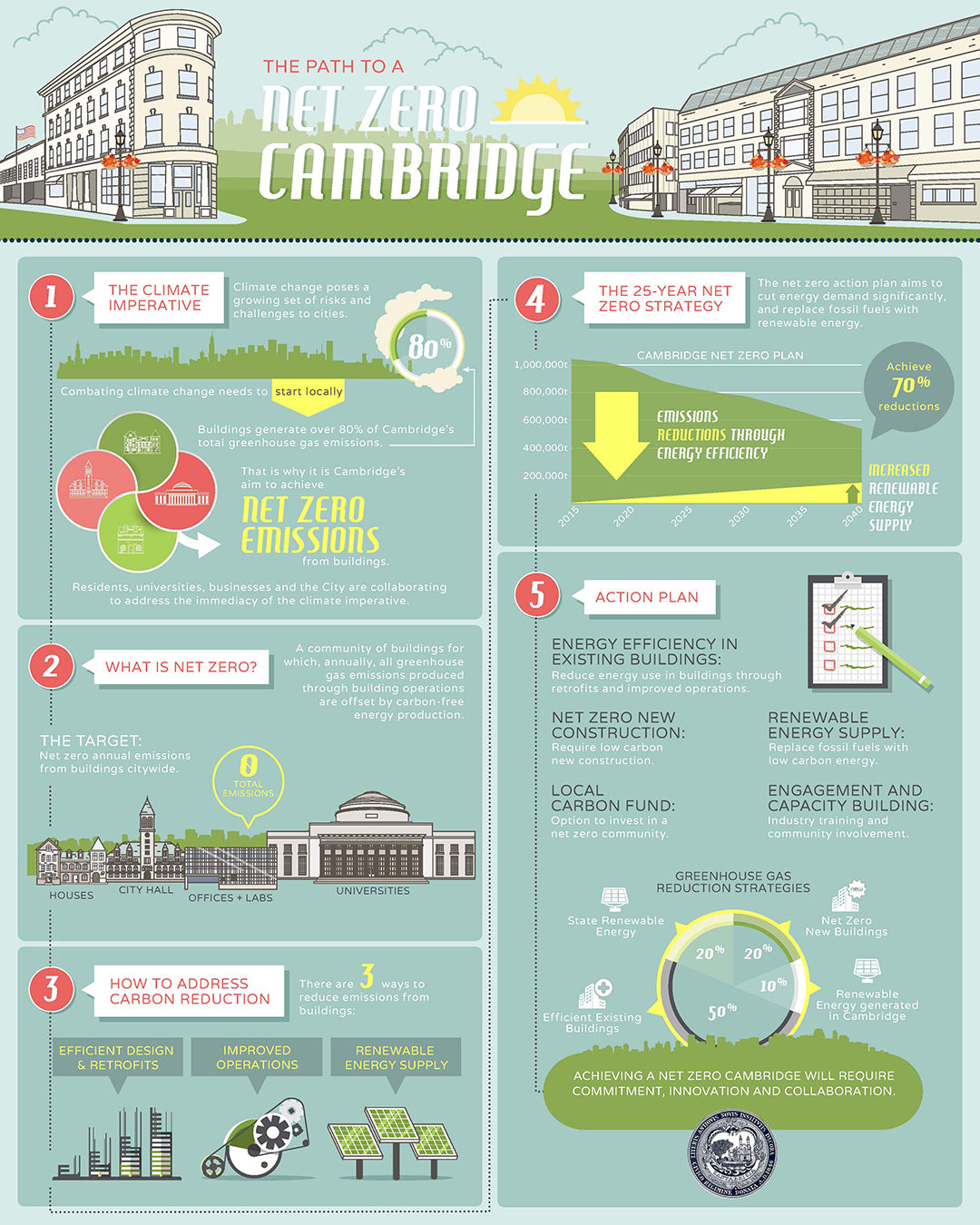 The Net Zero Action Plan, adopted by the Cambridge City council in 2015, redefines the concept of “a net zero community” as “a community of buildings for which, annually, all greenhouse gas emissions produced through building operations are offset by carbon-free energy production.”

Cambridge faces special challenges. A study in 2012 showed that in Cambridge, buildings generated up to 86% of the city emissions, which was almost double the overall number nationwide. Among all the building types, commercial and institutional buildings contribute to more than half of the overall energy emissions. Home to several universities and research institutions, Cambridge is a major biotech center with over 100 companies, and it continues to grow as a hub for technology innovation and entrepreneurship. Campuses like Harvard and MIT play significant roles in the city’s effort in reducing energy consumption. As a result, city planners and politicians have to work with those institutions to implement sustainability strategies.

Planning for net zero is a collaborative process that engages institutions, government and the residents of the neighborhoods. In her presentation, Henrietta used MIT’s zoning petition for a large-scale mixed-use development at Kendall Square as an example of this collective effort. MIT’s redevelopment of its parcel at Kendall Square consists of retail, housing, innovative space and public space. MIT to formed a new Getting to Net Zero Task Force to and was able to optimize the petition to create components that help improve the living environment within the neighborhood. Essentially, everyone, from the government to the residents, could be the catalysts for the net zero effort. 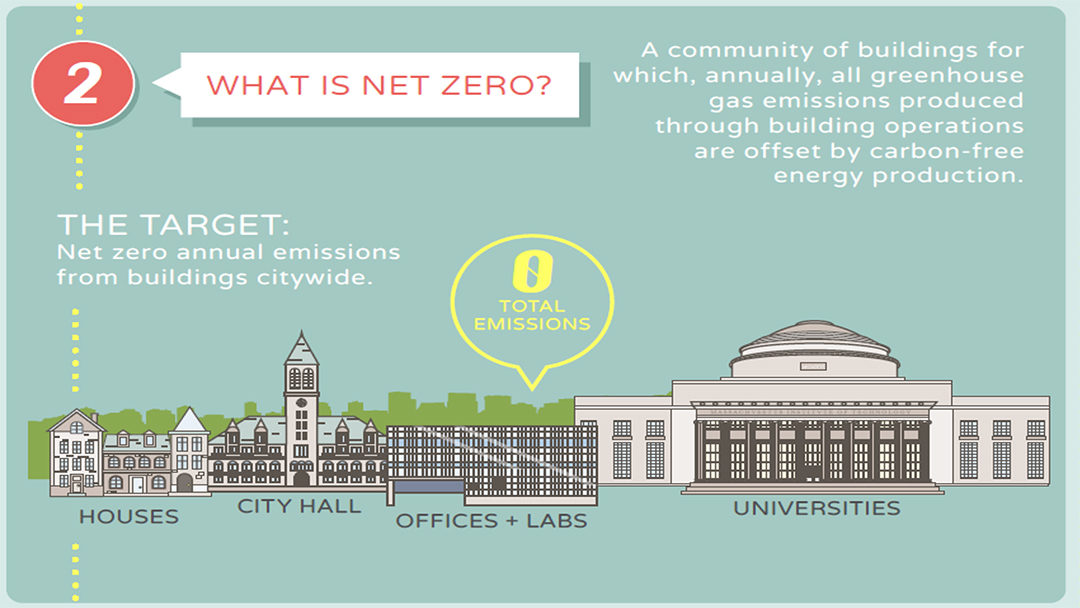 I was inspired to think about architects’ role in dealing with sustainability. And I, as a designer, feel more encouraged to be engaged in this issue after seeing Cambridge’s commitment to net zero. When it comes to building net zero, it is a challenge, but also an opportunity. Payette is committed to improving building performance and minimizing the impact our buildings have on the environment. When designing university science buildings and research facilities, we employ scientific tools and strategies to inform our design, like optimizing façade performance and sourcing renewable energy. At Payette we believe design excellence and building performance are inextricably linked. I believe we could use our advanced knowledge to benefit the living environment of the larger community. We are designers, and also citizens. It’s the right time for us to actively engage in city planning efforts using the design protocols we possess. It is on every one of us to build a net zero city.