Rainscreens have become increasingly popular for commercial façades in the past few decades due to their ability to control air and moisture movement. Because the cladding is held off the wall structure to form a drainage cavity while accommodating insulation and a robust air and vapor barrier, these systems require a secondary structural system of rails, Z-girts and/or clips to support the cladding. Typically made of highly conductive metals, these structural members penetrate through the insulation and cause significant thermal bridges. While insulation between steel studs has long been acknowledged in the industry to cause thermal bridging, these rainscreen supports have a similar thermal impact that was widely overlooked until recently.

In our thermal images of rainscreen façades, we observed a decrease in thermal performance that ranged from 20% to 60% less than the design intended performance, with a typical decrease of 45-55%. All of the systems we selected for study had between two to three inches of insulation. We looked at a rainscreen with horizontal Z-girts, vertical Z-girts and a clip-based system. Not surprisingly, the continuous Z-girts, whether horizontal or vertical, performed similarly. In both orientations, Z-girts demonstrated an R.7.7 reduction in the assembly’s R-value, or an approximate 45-55% reduction in performance depending on the insulation thickness.

The façade with the clip system for the rainscreen performed much better than those with continuous Z-girts. Because of the intermittent nature of the clips, these systems performed well both in thermal images and in the computer modeling. The clip support system had half of the heat flow of the Z-girts, or 25% of the design intent. While the intermittent nature of the support system certainly improved the performance, we investigated ways to further improve the performance of rainscreen support systems. 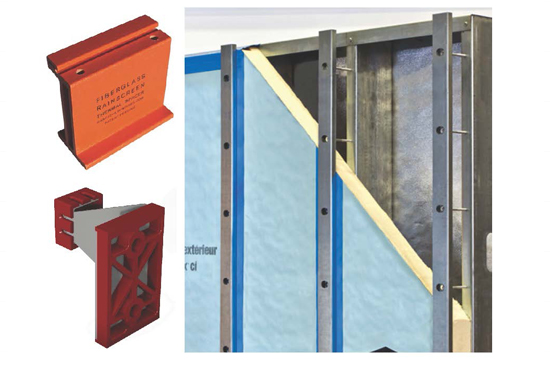 A number of thermally broken Z-girt and rainscreen support systems currently exist on the market. As part of the research project, the team explored three of the available thermally-broken options. The first removed the support through the insulation with horizontal and vertical tube supports on the exterior and allowed only the stainless steel bolts to penetrate the insulation. The second system investigated a fiber glass clip system. This has the benefit of being intermittent, similar to the previous clip, but also uses a material that is more than 200 times less conductive than steel. The third system investigated was a discontinuous steel bracket with isolator pads on both the warm and cold side of the insulation, in order to minimize heat flow through the brackets. All three of the tested systems performed well. In general, the R-value of the assemblies was only reduced by 10-15% due to thermal bridging through their support systems, and so they achieved a minimum of R-20 with four inches of insulation.

Hi Andrea, this is really a very good breakthrough. Keep up the good work.