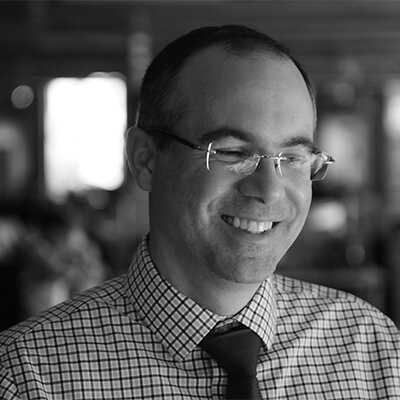 In this month’s column for Lab Design News, we detail how task lighting can have a big impact on your lab’s energy performance.

Research Laboratories are one of the most energy intensive building types and when looking to reduce the amount of energy a lab uses, the lighting strategy needs to incorporate task lighting in order to make an impact. The use of task lighting in a laboratory, when combined with an overhead ambient lighting system, has been shown to be an excellent way to reduce lighting energy and provide a means for ultimate controllability of a researcher’s illumination of the individual work area. A task – ambient lighting strategy can save 33% over the conventional standard fluorescent pendant overhead system. However energy savings is not guaranteed when task lighting alone is incorporated in to the lighting strategy. To achieve the expected performance, fixture quality, placement, operation and close coordination with the lab casework contractor must be addressed.

LEDs – Quality and Output
In a research environment, it’s not just the amount of light but quality and adjustability are just as important. The work researchers do, whether in an Engineering Lab or Biological Lab, may vary from day-to-day or project-by-project depending on the investigation. The advent of LED fixtures has provided an opportunity to get more light output for less energy and in locations that fluorescent fixtures could never be installed because they are too bulky or restricted by lamp dimension. On the Harvard University Sherman Fairchild Renovation project, we executed an ambient lighting scheme with LED task lights and fluorescent ambient fixtures. This scheme used only 1.64 w/sf with all task lights on; compared to a 1.99 w/sf of a traditional design. The lighting power density dropped to only .87 w/sf when the task fixtures were not in use. LED fixtures do save energy but not all fixtures are created equal and poor quality fixtures can create problems. Some linear fixtures have wider diode spacing than others. Wide diode spacing has the effect of multiple light sources and can, in turn, create multiple radial shadows on the work surface. Diodes arranged in a more continuous line, which some manufactures refer to as a ‘zipper’ arrangement, creates a more consistent line of light and normalized directional shadow. 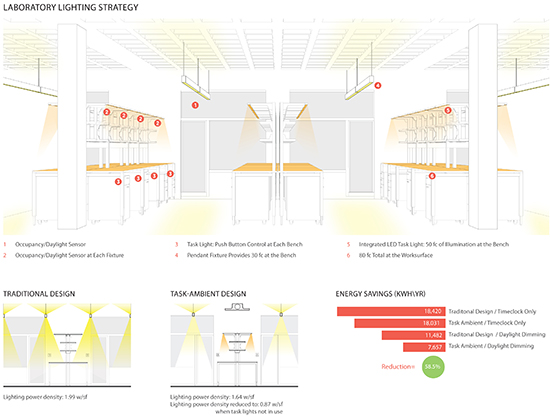 Lab Casework Coordination
Fixture selection is an important step in the task lighting design process and equally essential is its integration into the laboratory casework and coordination with the casework manufacturer. The fixture mounting location is one aspect of this that needs to be considered. Laboratory work surfaces, whether at a wall or at an island, typically sit below shelving. Mounting a task fixture to the underside the lowest shelf, usually at a minimum 18” off the work surface, is a common solution, but has been met with mixed results. Due to the height and amount of equipment frequently on a lab bench, these can interfere with the light distribution and cast unwanted shadows on the work area. On recent projects at Cornell University, Kimball Hall and previously mentioned Sherman Fairchild, we have found that installing the task light on the leading edge of the uppermost shelf, approximately at 7’-0” above the floor, shadows from benchtop equipment can be avoided while allowing the lower shelves to be removed, making space for taller apparatuses. The light must be positioned so the beam focuses on the work surface and does not cast shadows from lower shelves or blow past the edge of the work surface. Illuminating beyond the edge of the bench not only wastes light energy, but can also cause glare for the researcher. By extending the depth of the upper shelf, the light can be optimally positioned.

The fixture housing and lens need to work together to focus the beam, shield the diodes from direct view, protect from glare, protect the fixture components and integrate with the casework upon which it is mounted. Attachment to the casework needs to coordinate with the shelving, shape, material and the shelf brackets. Mounting to metal shelving can be accomplished with screws or magnets. Wood shelves can provide more flexible adaptation. For example, on the Kimball Hall and Sherman Fairchild projects, we detailed a slot specifically designed to receive the fixture so it is physically and visually integrated with the shelving. This precise integration with the laboratory casework influences the purchase of fixtures.

Unlike traditional overhead light fixtures, we specify these lights with the laboratory casework so the casework provider can coordinate the lengths, mounting and wiring as part of their scope. Since LED fixtures operate on direct current low voltage power they require a driver which converts the standard 120v, down to 12-24v. Driver sizes vary, but at roughly the size of a brick, location needs to be considered. Coordination of any wiring through a lab bench system is not insignificant. Manufacturers hire testing agencies to certify lab casework with electrical components. It can be a time consuming and expensive process to certify an assembly if the wiring method differs from previous certifications, so advanced planning pays dividends.

Operation and Control
There are numerous configurations for the operation and control of task fixtures to maximize energy efficiency and these need to be tailored to each project. Switching and occupancy / vacancy sensors are two of the featured components that are keys to its success. At the Kimball Hall and Sherman Fairchild projects, we used a task light with an integral vacancy sensor which provided individual control and maximum energy conservation at each fixture / bench station. There are a wide variety of sensors available but some are intelligent and allow programming adjustments for vacancy time while also having the potential to turn on when someone returns within a short period. At these island bench locations we placed a push button on / off control on the table frame that supports the work surface. It requires close coordination of the wiring with the casework manufacturer to keep it concealed but this location provides ease of accessibility for all users.

At Sherman Fairchild we implemented a simplified strategy at wall locations. The task light was plugged into a dedicated wall outlet located just above the shelf. A basic wall switch controlled power to this outlet and a vacancy sensor at the ceiling was programed to override the switch and cut power to the outlet / task light if the room was vacated for a predetermined period of time. This method is a cost effective option when compared with an integral fixture sensor. Multiple fixtures can be daisy chained off one outlet. A number of manufacturers make sensors that can control both the lighting and the HVAC system, reducing the amount of sensors and clutter in the room.

With efforts to bring the lighting power density of building down and lower ambient lighting levels as a way to achieve this, task lighting has an important role to play. With tasks that vary from intricate cell manipulation to computational work on computers, task lighting provides an extraordinary amount of control for a lab researcher to modulate their environment. The successful implementation of these fixtures will impact the day-to-day efforts in a positive way.