In this three-part series, we will showcase the process, results and lessons learned of a Low-E Experiment conducted by our Building Science Group to better understand the impact of low-E coating on insulated glazing units (IGUS).

In our recent posts on the Room Side Low-E Experiments: Findings and Impact, we presented our key findings that we learned from testing the thermal performance of insulated glazing units. However, this summary of results overlooked another key lesson we gleaned from this exercise: how incredibly difficult it is to conduct controlled physical experiments!

As the conclusions of the previous post indicate, we were ultimately able to control the conditions of our setup well enough that we obtained statistically meaningful results and were confident in the findings. However, what we failed to mention in this post is that we had to completely re-do the experiment three times and gradually improve our methods over the course of 18 months in order to obtain these findings. Over this year-and-a-half process, we came to question every aspect of our initial setup and realized many challenges in controlling the variables of the physical world. So, with this post, we wanted to share some of the stories and lessons that we learned from conducting these controlled physical experiments so others embarking on their own physical tests can do so with foresight.

1 – Remember the Setup is Just the Beginning:
When we initially set out to test the thermal conditions of the three IGUs that we received from Viracon, we thought that the most difficult part of our experiment would be the assembly of an insulated box fitted out with IGUs, heat sources and sensors. Little did we realize that this was just the beginning… 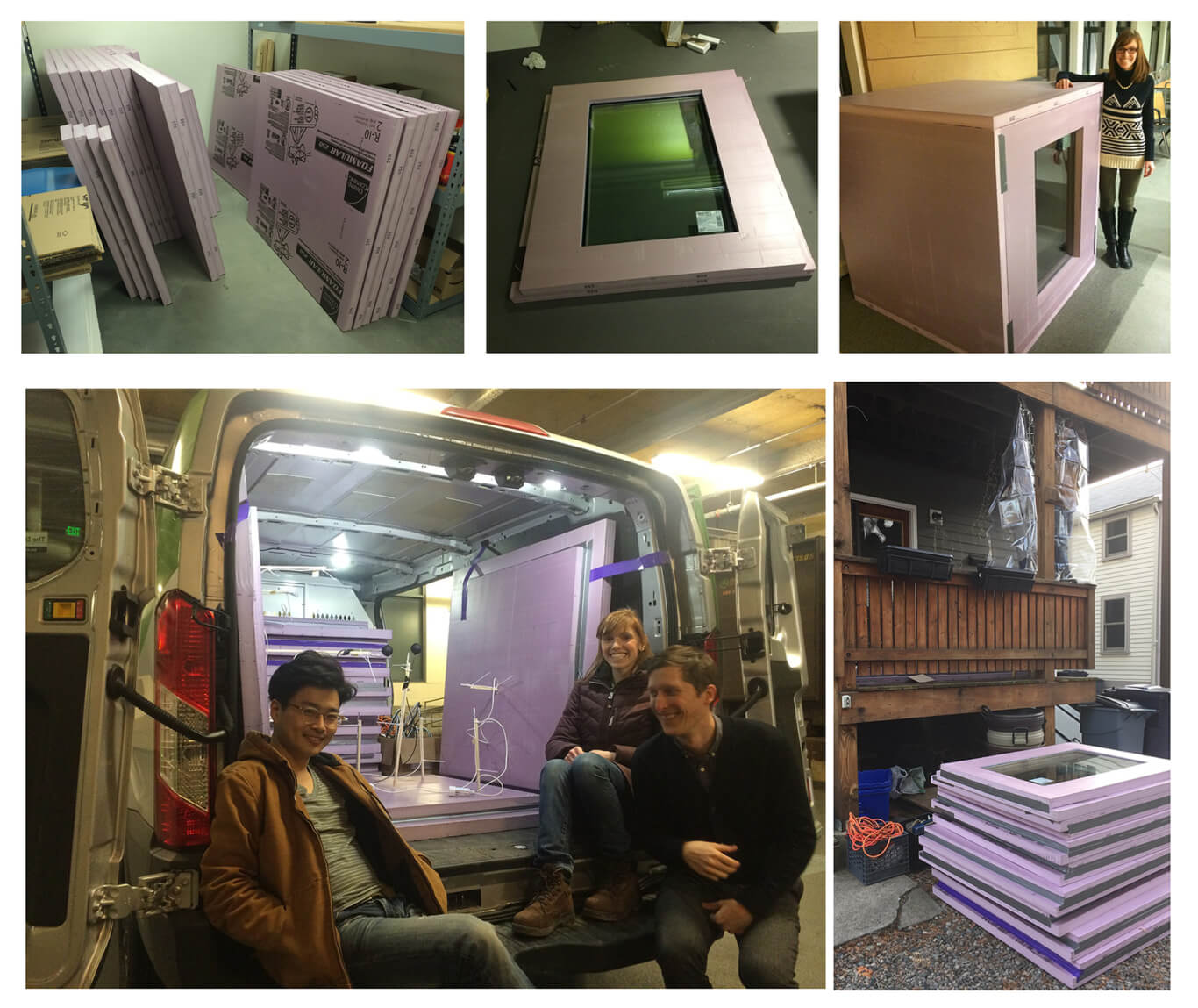 Over the course of the 18 months following the box assembly, our experimental setup would be deconstructed, tweaked, remodeled, transported and reborn countless times. Nearly every assumption that we made about how the box would thermally perform held at least one fallacy and, if we could have left a message to our past selves as we were first assembling the box, it would have been to question more of our starting assumptions from the beginning and seriously consider the “noise” that small details can introduce to our data. Details as small as the following all ended up having a tremendous impact on our initial dataset:

Many of these factors had to be controlled by using the same box for each IGU and some of them (like the electrical variation in the power grid) required us to be standardized in the time of day we took readings. However, in all of our initial naivety, we managed to get one thing right from the beginning: we built our experimental setup of modular components that could be easily be mixed and matched as we improved the design. Had we not done this, the monetary and time costs of the experiment would likely have been unmanageable. Using interchangeable components allowed us a degree of freedom to iterate on different experimental setups until we had a situation that controlled for a certain variable.

2 – Be Prepared for Iteration:

While some forethought might have helped us in the beginning, it is still very clear to us that every physical experimental setup requires some degree of iteration. Many of the components of our experiment went through several versions as we realized the thermodynamics around that component were not what we expected.

For example, the shield that we built to prevent the globe thermometer from reading the radiant temperature of the light bulb (instead of the temperature of a cold IGU) went though many re-designs.

At first, we thought the low-emissivity surface of aluminum foil would be enough to reflect radiant heat away from the light bulb but the fact that this surface was not a perfect thermal reflector and it was also very thin meant that it was still able to absorb the bulb’s heat over time. Later iterations with insulated foam core proved much more effective at keeping the globe thermometer from reading the light bulb’s temperature and could be refined into a version with more structural stability. However, while we learned from these iterations, they were ultimately overshadowed by iterations of the heat shields around the light bulb that were intended to dissipate the blub heat to the box air.

Starting with a version of the light bulb shield that concentrated radiant heat so well that it caused a temperature sensor close to the bulb to melt, we gradually made progress towards versions that transferred the light bulb heat to the air in the box better without heating up the IGUs. With each version, less of the bulb’s radiant heat escaped to the windows and the final version could even support a convection pattern that was omni-directional for different surfaces of the box with different IGUs.

3 – Remember Scientific Concepts are Abstractions of a Messy Reality:
Perhaps the greatest fallacy of our experiments came from an implicit assumption that our initial hand calculations would be one-to-one translations into the physical world.  Little did we realize that many of the concepts that our mathematical models were built on are simplified abstractions of the real world, which are useful for helping humans understand physics and perform calculations but are far from perfect representations of reality. Of these abstract concepts that affected our experiment, there was none that introduced more initial error than that of “steady state physics.”

Oftentimes, physicists will make an assumption that the thermal systems they are studying are at perfect equilibrium since this makes it much easier to perform calculations about the system. Such equilibrium essentially means that all temperatures and heat flows through the system are constant through time and, collectively, we refer to these constant conditions as “steady state.” However, as we began our experiment on the back porch of one of our building scientist’s house, we quickly learned that these steady assumptions were not at all applicable to our current experimental setup.

Our box was in a constant state of flux as the outdoor temperatures went up and down, the sky lit up and went dark, and even the electricity going into the light bulb fluctuated with the supply/demand balance of the electrical grid. Ultimately, trying to create conditions that approximated this steady state assumption proved to be the biggest challenge of our experiment. We eventually moved the setup from our coworker’s back porch to a university cold room with much more stable temperature conditions:

After much iteration in the cold room, we realized that we had to leave the box in the room for more than 48 hours in order to measure conditions in the box that seemed stable. And, even with all of that time to reach “equilibrium,” we still had to be consistent about the time of day that we took readings in order to account for differences in the supply and demand of the power grid.

If we could have redesigned the experiment from the start, we might have thought of a different way to evaluate the box performance that did not rely on a steady state assumption. However, at the least, this process gave us a sense of how far our hand calculations can be from the reality of even simple setups.  We now know to pick the right scientific abstraction for the level of detail that we are trying to understand and, for any physical experiment in the real world, this level of detail should be considered at the maximum.