Over the past few years, we’ve been contributing to Ladybug Tools. Here’s a roundup of our contributions to the Honeybee THERM Components.

Ladybug Tool Contributions
We believe sharing methodologies and making contributions to open source projects. We find it beneficial to participate in an industry that peer reviews itself towards better and better work. This allows us to take ideas, designed in an echo chamber of our own work, to a larger scale. Our Building Science Group has contributed several new components and example files to the open source Ladybug Tools project. Among our biggest contributions to the project – making improvements when using Honeybee THERM Components. 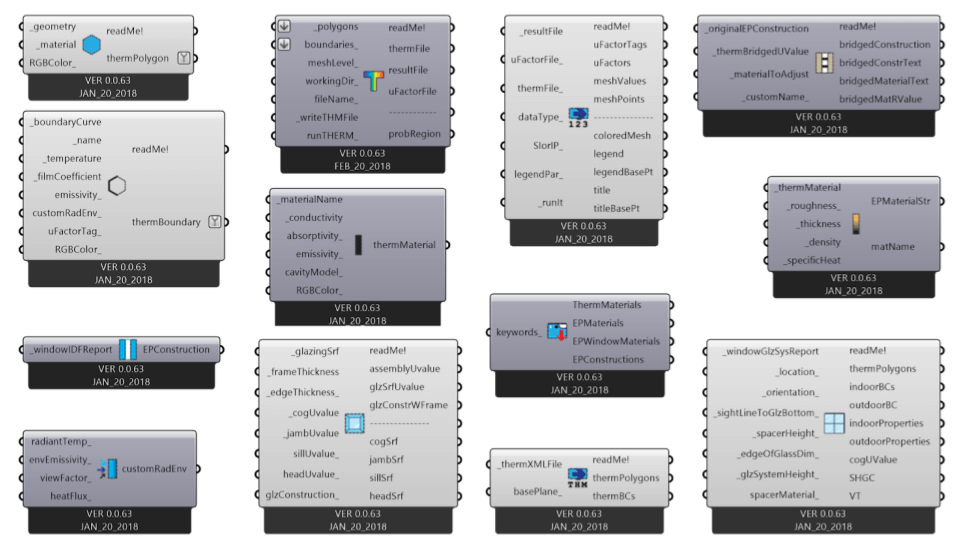 Honeybee THERM Components
Those who know our practice at Payette know that we create a significant amount of THERM models, as evidenced by the 100+ models in our Thermal Bridging Report. This prompted our thinking about how we to improve our workflows. It was often very time consuming for us to create models within the THERM drawing interface when compared to workflows within our more familiar and robust computer aided design (CAD) interfaces. Thus, we began a project that helped us take CAD drawings in Rhino and more efficiently produce complete THERM files. The result was a series of Grasshopper components that we contributed to the Ladybug Tools project, which effectively made our contribution the only CAD plugin for THERM that is currently available (as of this time of this post).

Because we shared the tools as a contribution to open source software, we were not only able to benefit from the work of others (borrowing material libraries and visualization functions that already existed in Ladybug) but this contribution also inspired others to improve our work. Most notable among these was that the developers of THERM at Berkeley were inspired to open public access to their command line interface (CLI), enabling us to run THERM models directly from our plugin and have even faster workflows like so:

With this newfound capability, we began exploring new types of studies that had not existed before, creating parametric THERM models to illustrate concepts like the importance of eliminating thermal bridges with increasing insulation thickness:

We also built interfaces to explore design spaces of hundreds of THERM models, like this study which was used to optimize pipe spacing and water temperature within a radiant slab cooling system.

For a full account of our contribution, you can see the THERM section of the Honeybee Primer along with a list of THERM example files with Honeybee.