Cleanrooms come in many flavors. This example covers semiconductor research cleanrooms, but the general principles are similar for pharmaceutical or biological cleanrooms. Specific levels of cleanliness and materials used may vary, but the basic problems and solutions are the same.

The biggest problem is that people are dirty. We’re like Pigpen: we shed dirt just standing around. Specifically, we shed about 30,000 skin cells per hour. That’s about 500 per minute. And that ignores all the particles we throw off by breathing moisture out, or sweating, or dropping clothing fibers.

Most of these particles are far too small to see, but the research being done is often on a far smaller scale. For instance, many modern computer chips have features 32nm (nanometers) across. One of your skin cells is more like 30 thousand nanometers. Imagine using your finest drafting pen to make an intricate drawing under a magnifying glass, while softballs rain down on your desk – 500 softballs per minute! (And at that scale, the “drawing” – a CPU chip – is about 40,000 square feet.)

So in any cleanroom, the first thing to do is isolate the source of contaminants. This is why you see researchers like this (actually, these are architects; the photo was taken by Frank Dirne, the very patient director of the Kavli Nanolab in Delft): 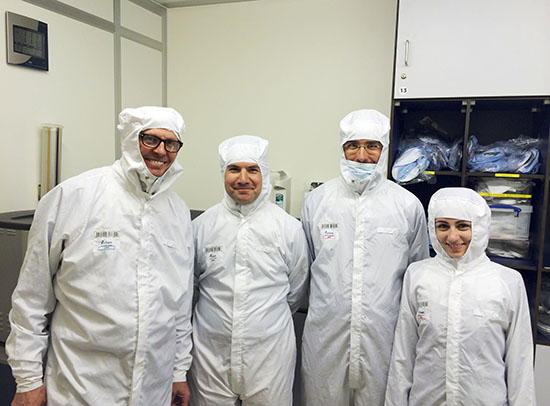 But the researcher still sheds some particles, and not all particles come from the researcher. Most of these particles are so light that they will never fall to the floor.  So instead we move all the air to the floor, taking the particles with it. Ideally, this is a nice laminar flow, so no eddies of air hold particles suspended in the cleanroom.

Where does this air come from? Well, it works best when it’s delivered from the whole ceiling. A common approach is a suspended plenum: a hollow metal box, with the underside being a ceiling grid full of HEPA-filtered diffusers. On top of it, a recirculating air handling unit (RAHU) conditions and supplies the air. (As an added benefit, suspending all of this HVAC equipment avoids shaking the cleanroom floor where your researcher is trying to construct tiny things.)

Where does the air go? Ideally, straight down through the floor.  A raised floor system with perforated tiles provides a place to return the dirty, heated air.

That shows the operation of one part of a cleanroom. But how does it expand into a whole research facility?

One possible model is a “ballroom” cleanroom: a wide open floor, with suspended plenums above, and a separate floor below (a “subfab”) to house all the support equipment. All the pumps, chillers, filters, gas cabinets, and so on are located in the subfab where they don’t contaminate the cleanroom (or vibrate it), and only sealed production equipment is located in the cleanroom itself. 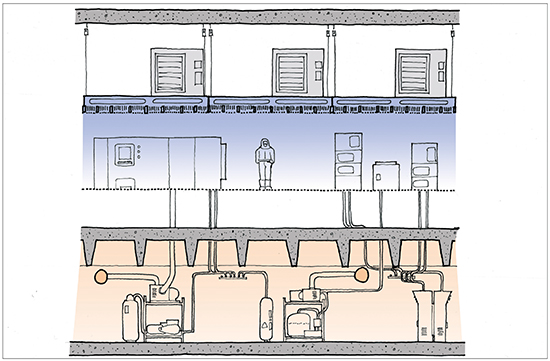 This is better for production than research, though. In a research cleanroom, tools are changed constantly, and having to visit another floor to control support equipment is a disadvantage. So in many cases, a “bay and chase” cleanroom is constructed, consisting of clean spaces (“bays”) and support / return air spaces (“chases”) in alternation. 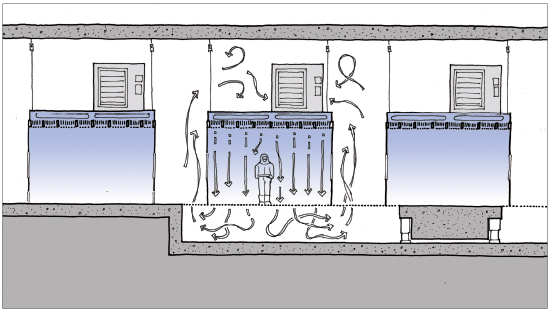 This works whether a raised floor is available or not. If there is no raised floor, air simply returns through a gap at the bottom of the cleanroom wall (at left). The raised floor space may also be used for a vibration isolation plinth (at right). 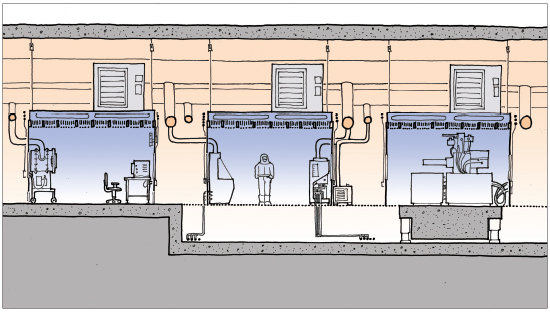 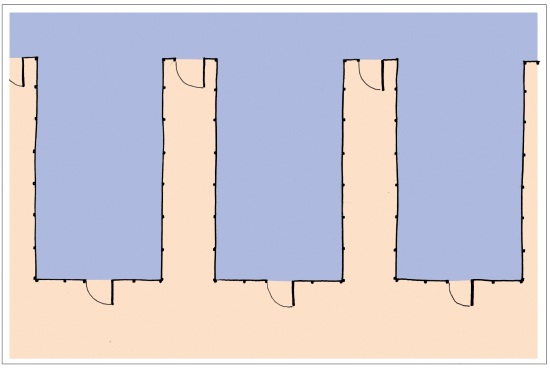 Putting it all together: This photo, take by Elen Zurabyan during a visit the Skolkovo team took to the Kavli Nanolab in Delft, shows a clean aisle (on the left) connecting multiple clean bays (one visible on the right). Notice again all the architects in clean suits. 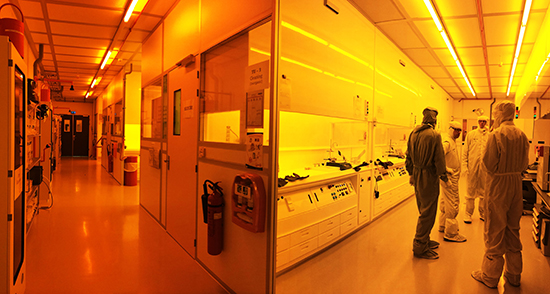