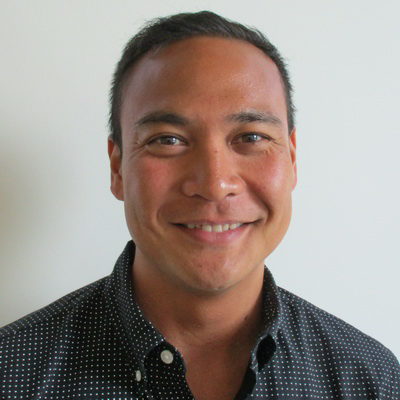 The new Science Building for Wesleyan University will house intensive research under the leadership of over 35 Principal Investigators (PIs) and become a new social hub for the southern end of this intimate campus. The overall form is comprised of three clusters linked with the ‘Commons’ – the connective tissue of shared public areas. The expression is voiced in two languages – ‘grounded’ research clusters rendered in heavy limestone and the connective commons expressed in high-performance large-format glass and minimally-detailed components. The Commons pushes from the center of the building; the energy directs the windows of each cluster to radiate from the building entry points – transparent planes where the connective tissue is expressed at the exterior as an invitation to the community. 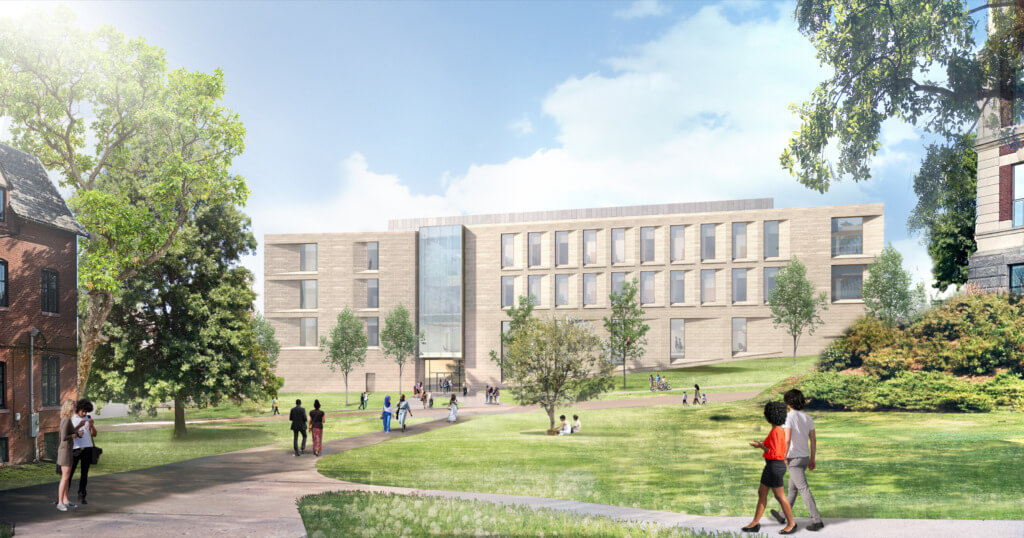 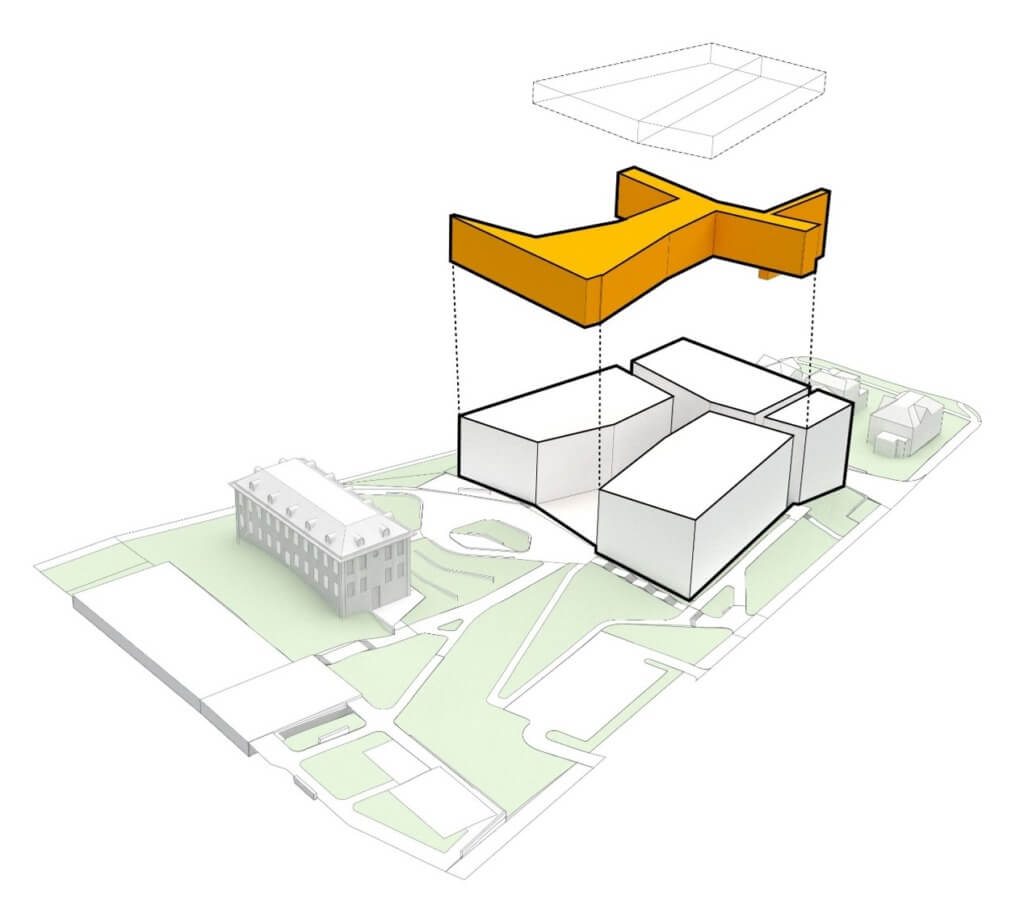 Experienced in the round, the proximity of the visitor to the façade puts a strong emphasis on crisp detailing and material quality. The warm limestone references other buildings on campus, where it is used both as a primary cladding material and as decorative trim. Drawing from this institutional context, employing a traditional laid-up masonry system is important the reinforce the gravitas of the clusters, versus the ‘thinness’ revealed in a rainscreen cladding application. Further, this solidity allows a conceptual stereotomic erosion in the shaping of punched openings to emphasize the robustness of the limestone forms. 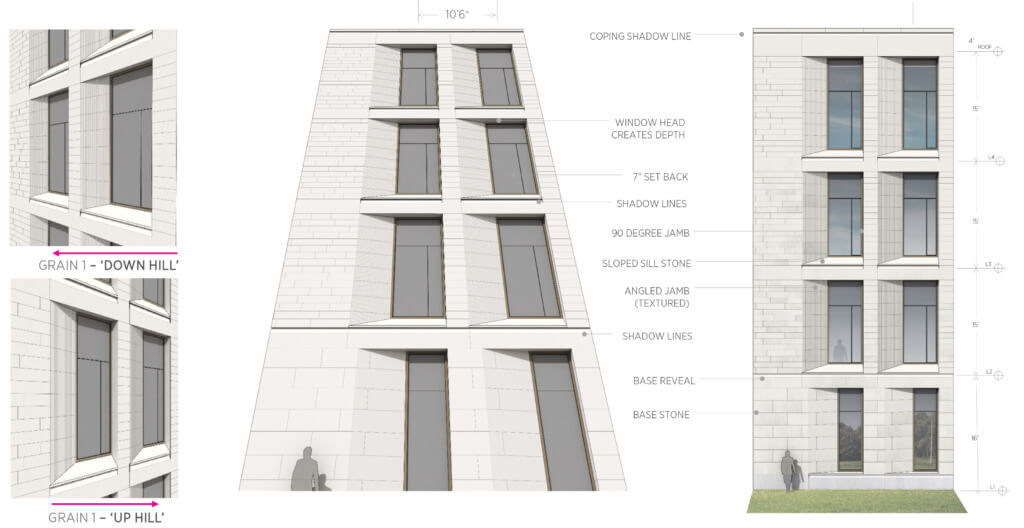 In providing an efficient building envelope, the operative profiling depth of the outer surface provides for just under eight inches of potential offset. The team developed two techniques to maximize the effect of a thick masonry wall: 1) splayed, textured stone jambs and 2) multi-faceted lug sill stones that continue the vertical geometry of the stone jambs and folds them into a pitched face, all within a single, solid block. The splayed jamb breaks down the outer face of the wall, maximizing the punched window effect of a building with a fairly low window-to-wall ratio of <30% (inclusive of the all-glass expressions at the three entry points). As the largest components, the lug sills anchor the visual rhythm of the masonry façade’s openings.

The profiling of these splayed jamb stones recalls traditional fluting. Whereas conventional techniques typically rely on a repeatable handcraft, our digitally-fabricated concept allows for progressive patterning, generating fade and gradient effects through the overall pattern. While the potential geometries are endless, the design team seeks a cost-effective solution that maximizes effect with technical efficacy. 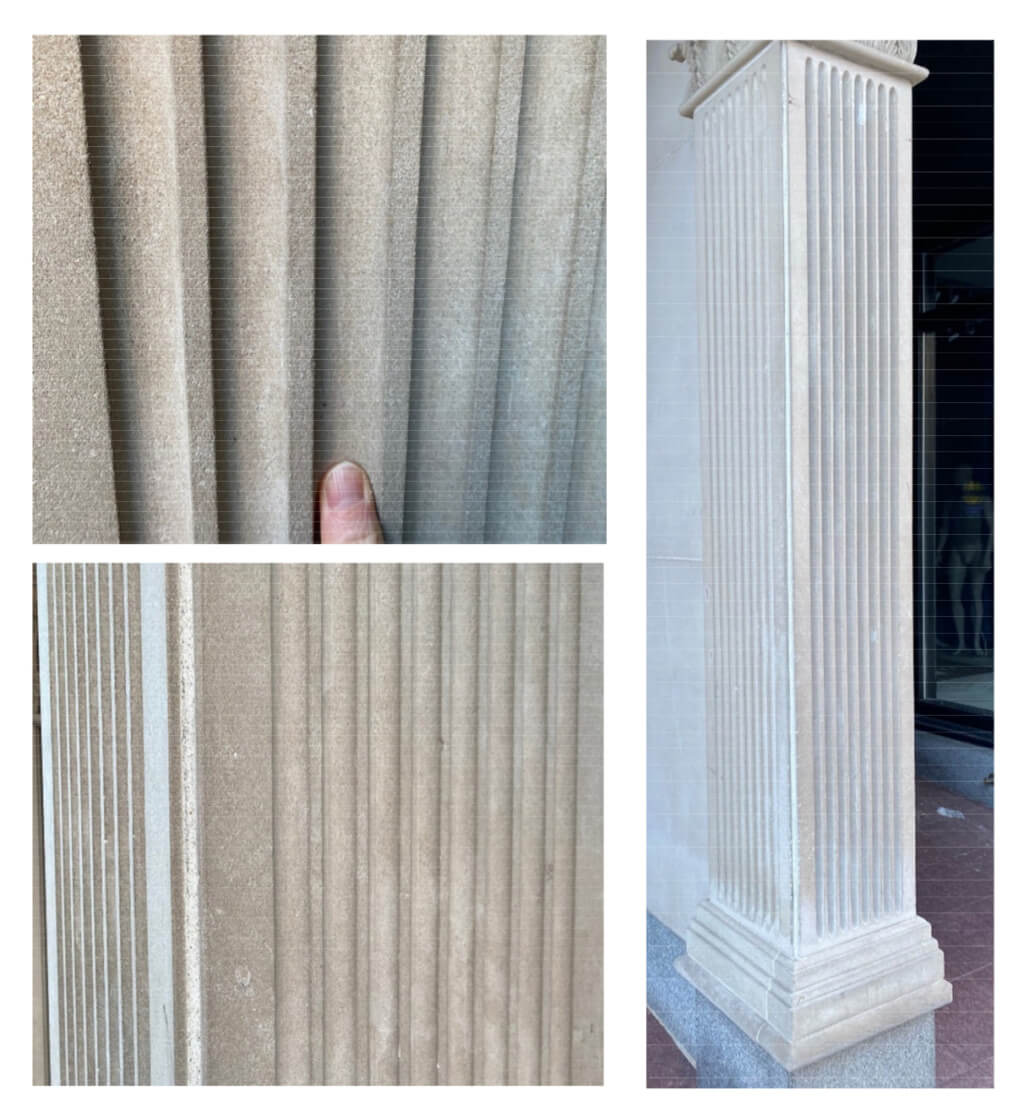 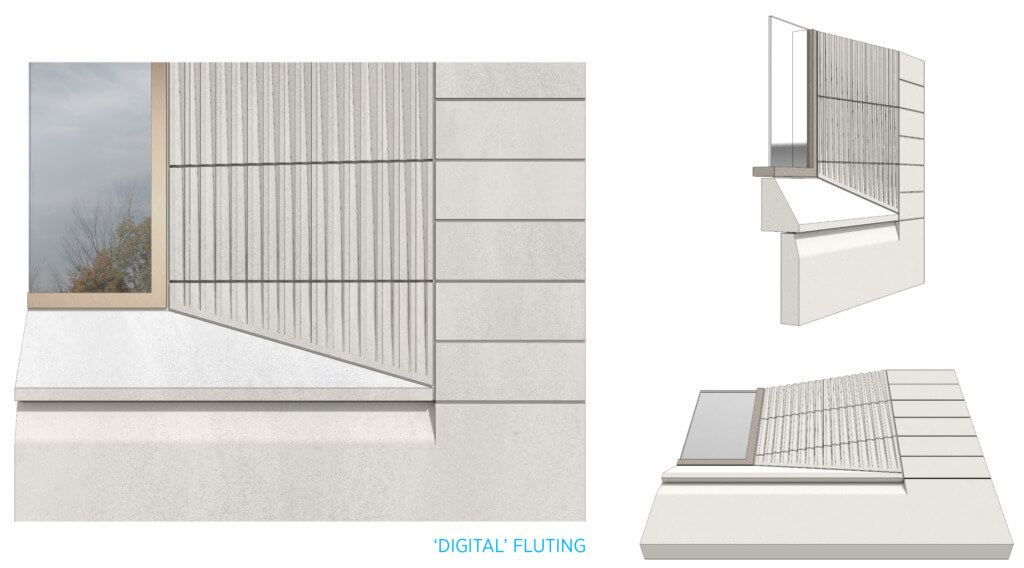 Payette engaged Quarra Stone of Madison, WI, in pre-design studies to address this challenge and help in the identification of an appropriate limestone variety. Quarra has an impressive portfolio of work, ranging from architectural façades to public sculpture and fine art pieces, with in-house fabrication capabilities to match. Naturally, our Payette fabrication team found early synergy from our very first calls to discuss the project, seeking clever applications of maker-methods to achieve our proposed geometries. Inherent properties of different limestone options were considered in developing the detailing and overall composition of the masonry façade. Our process led us to a high-strength, low-absorption Jura limestone found in southern Germany, which has been used as a traditional building material for many hundreds of years, and whose properties allow for a fine level of profiling and stability in anchorage using contemporary methods. This type is also abundant in fossilized matter, adding a visual richness when seen up close.

Fossilized character of Jura limestone and milled texture seen with variations of light and perspective.

Taking our digital model, Quarra built a 5’x5’ full-scale segment of the façade, including a large component of the lug sill and jamb stones. Starting from a full slab selected specifically for the project, the mockup was realized using with both digital and manual techniques for shaping and finish. While the process revealed many opportunities for improvement, the result was effective in confirming the visual quality of the limestone variety and our initial notions that both the texturing of the jamb stone and the faceting of the sill stone provided immense value in conveying the perception of a heavy masonry wall. Furthermore, understanding the orientation of the stone veining, and effect of the level of honing helped to define the material specification.

A direct understanding of the shop capabilities informed specific strategies to achieve material affect though simple modifications of a specific tool’s settings. The two-day visit allowed for real-time tests based on concepts derived in direct reaction to the original piece. The Payette team sketched a series of ideas that were fabricated within hours at scale in the desired material. With this next round of tests, we established a clear set of criteria for the project study:

Real-time tests by Quarra in Jura limestone, based on Payette sketches.

Fortified with lessons learned from the trip to Madison, the design team charged our in-house fabrication group with targeted full-scale studies to be built in high-density foam, that could be easily housed and moved between shop, office and client. At 165 lb/cf, the lug sill stone alone weights upward of 700 lbs for the typical span. The CNC bed allows for large flat-stock components to be milled and assembled. Continued refinements to the geometry of both the jamb texture and sill profile details were quickly prototyped and at a texture field size large enough to be studied for light effect. 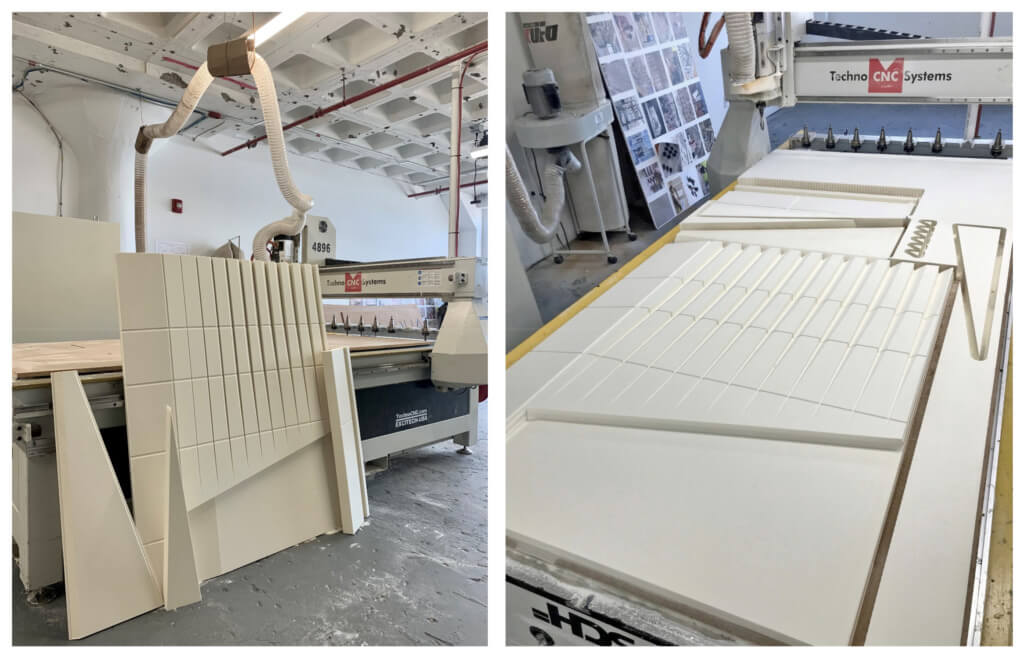 As the project continues into construction documents, the feedback loop continues with both our in-house fabrication team and stone supplier/fabricator to generate targeted tabletop mockups to understand specific qualities of the material – finish levels, textures of cutting tools, inherent patterning of stone. Next steps include specific color selection with the client – the tone ranges from beige to grey depending on the elevation within the quarry the limestone is extracted. Then, a visit to the source quarry in Germany will confirm the veining and specific color range of stones, with another mockup of the current jamb and sill conditions, which will later be integrated into an on-site visual mock-up to inform the construction team.

This process has demonstrated the positive effect of engaging partners early in the design process, and how this helps to inform decisions about responsible and efficient use of materials and resources. This prototyping process has been paralleled with a similarly deep investigation of the building envelope for both supporting the stone and managing water in the wall assembly. This effort strives to employ a lively material with strategically placed, cleverly fabricated components, that subsequently allows for a simple, conventional installation. 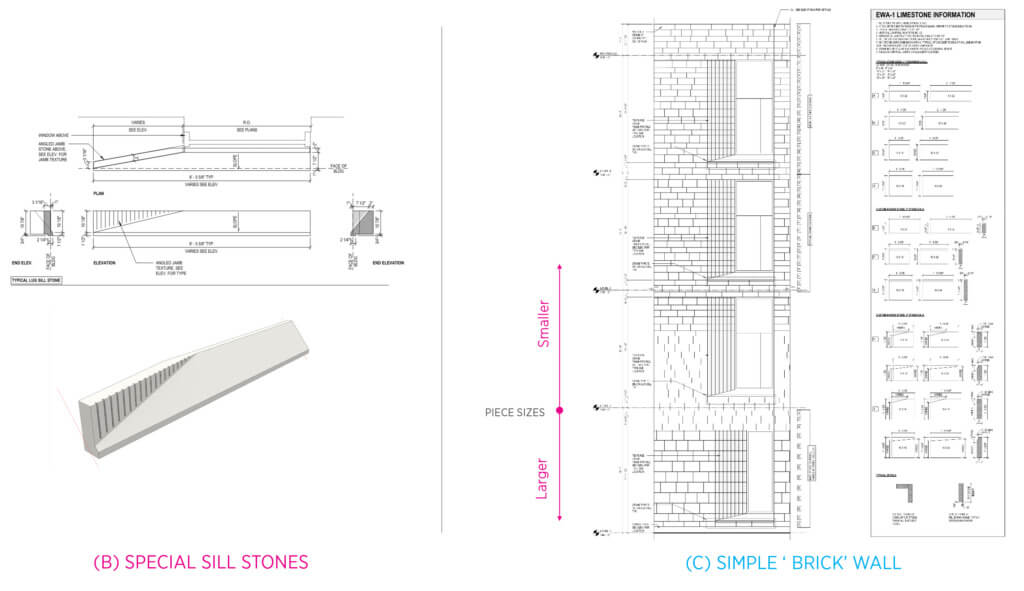