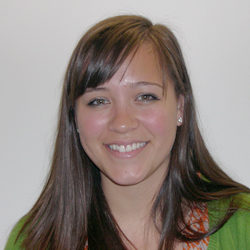 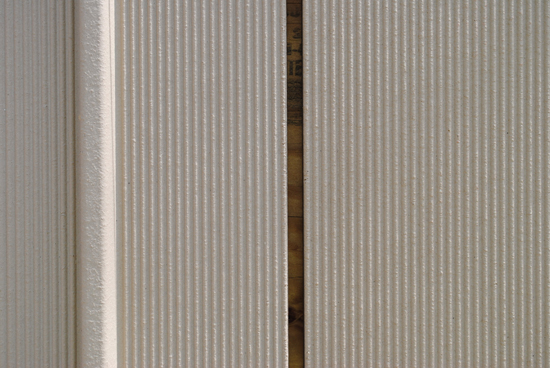 Last fall we encountered a new experience with terracotta tiles for a rainscreen application and with little written literature regarding the issue we would like to share our experience. Vanadium was found in terracotta panels ready for shipment for one of our projects under construction. We learned that Vanadium is a natural element found in clay; it is a type of efflorescence that manifests itself as a yellow green stain on the surface of terracotta tiles. Currently there is no test for the element in clay, and evidence of Vanadium only appears after produced tiles have been exposed to moisture. In our manufacturer’s experience this phenomenon occurs in production batches only a few times a year, and the existence of Vanadium calls for new production runs as there is no procedure to remove the appearance of Vanadium once visible in the tiles.

It was also noted that evidence of Vanadium always occurs in the same colors, the lighter color tiles. Currently red or dark colored tiles are not likely to encounter this issue, in part because of the temperature to which the red and dark color tiles are fired. Temperature is related to color in that, the higher the fire temperature of the tiles, the darker the color. Thus, the plan to remediate the Vanadium issue would be: 1) firing the clay at an increased temperature and 2) additives to the formula. Firing the clay at an increased temperature caused a reason for design team concern, as we did not want to accept a darker color tile as a result of the issue. To ensure a color consistent with the sample that had already been approved, revisions to the color formula would be made as well as additives to the formula. The manufacturer was also required to send color samples and color data for each production run to ensure compliance with the already approved color.

Finally, ASTM C67 is a standard that prescribes test methods for sampling and testing brick and structural clay tile. One of the tests required by ASTM C67 is for efflorescence, the test requires ten specimens to be immersed in water under certain conditions and left for 7 days. As a final precaution to ensure recovery from the issue, and in spirit with ASTM C67, the manufacturer would submerge a tile from each batch at the start of production to speed the effects of Vanadium and test for its presence.

In the end, the reconciliation plan for the new tiles was well executed and the tiles in the new production run did not have evidence of Vanadium and were a consistent color match to the approved tiles.

Hi Cara, It’s fun to get a sense of what you’re up to these days, I hope we can catch up in person sometime soon. Meanwhile, I wonder if you have time to participate in some design reviews at WIT – I’m teaching 3rd year studio (tectonics) and we have a pin-up this Friday 1-5pm. It would be great if you could join us! Best, Ann