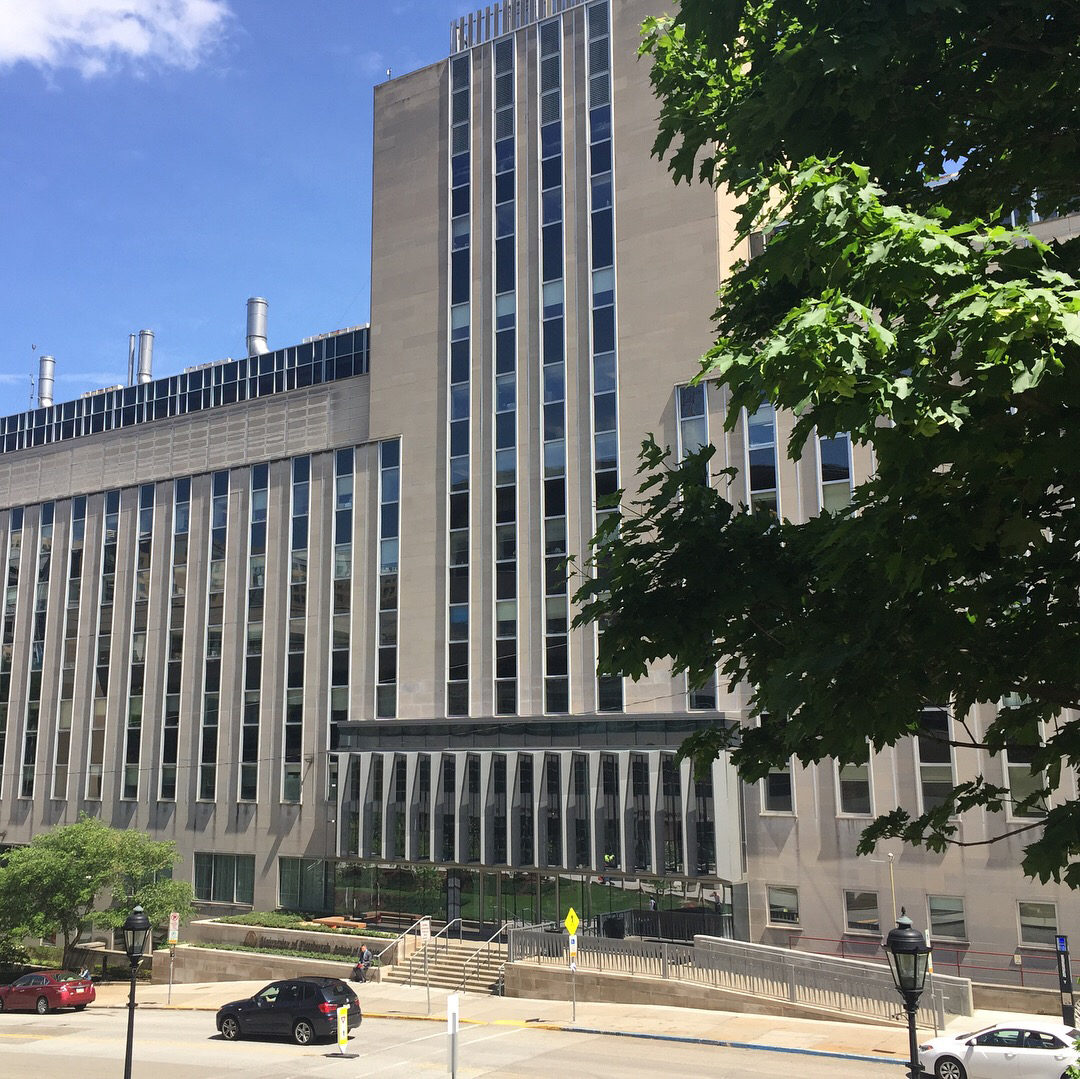 Photographing a building, just like designing a building, requires technical skills and a strong understanding of the design intent. Visual documentation plays a key role in how projects are conveyed and understood. Photographs can reveal spatial ideas, showcase essential details, express materiality and communicate programmatic use. I recently got to accompany photographer, Warren Jagger and an assistant on a photoshoot of Payette’s Scaife Hall addition and renovation project at the University Of Pittsburgh School of Medicine. I was pleasantly surprised when I met Warren and he immediately understood and appreciated the design intent of the Scaife Hall project. This in and of itself added to the satisfaction of seeing my design work built. 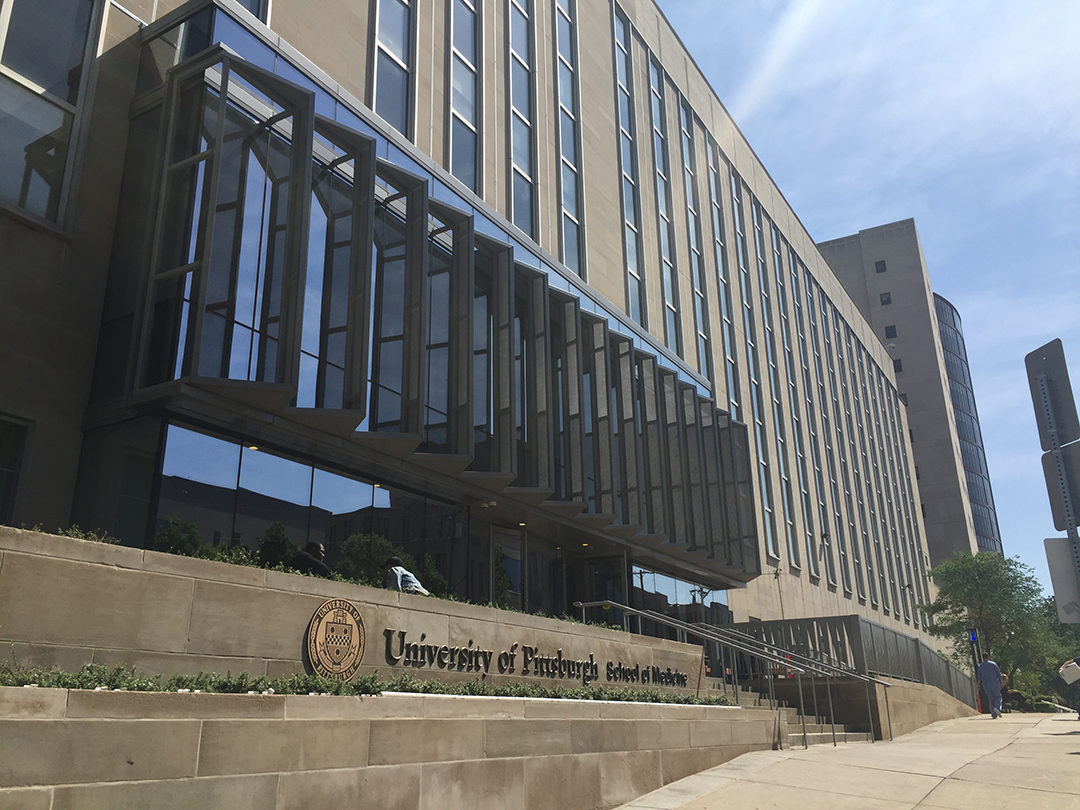 The project provides a new front entry and student lounge addition for the medical school. A custom metal sunshade with a toothed edge acts as a veil surrounding a two-story glass box. Cantilevered off the existing structure, the sunshade provides both the critical solar shading for the western afternoon sun as well as a vertical rhythm over the curtainwall façade, in response to the existing rhythm of Scaife Hall’s long vertical windows. We worked with Warren as he framed and composed exterior shots to capture the intricacies of the façade. It was especially important to capture how different the façade looks depending on the time of day and the approach to the building. 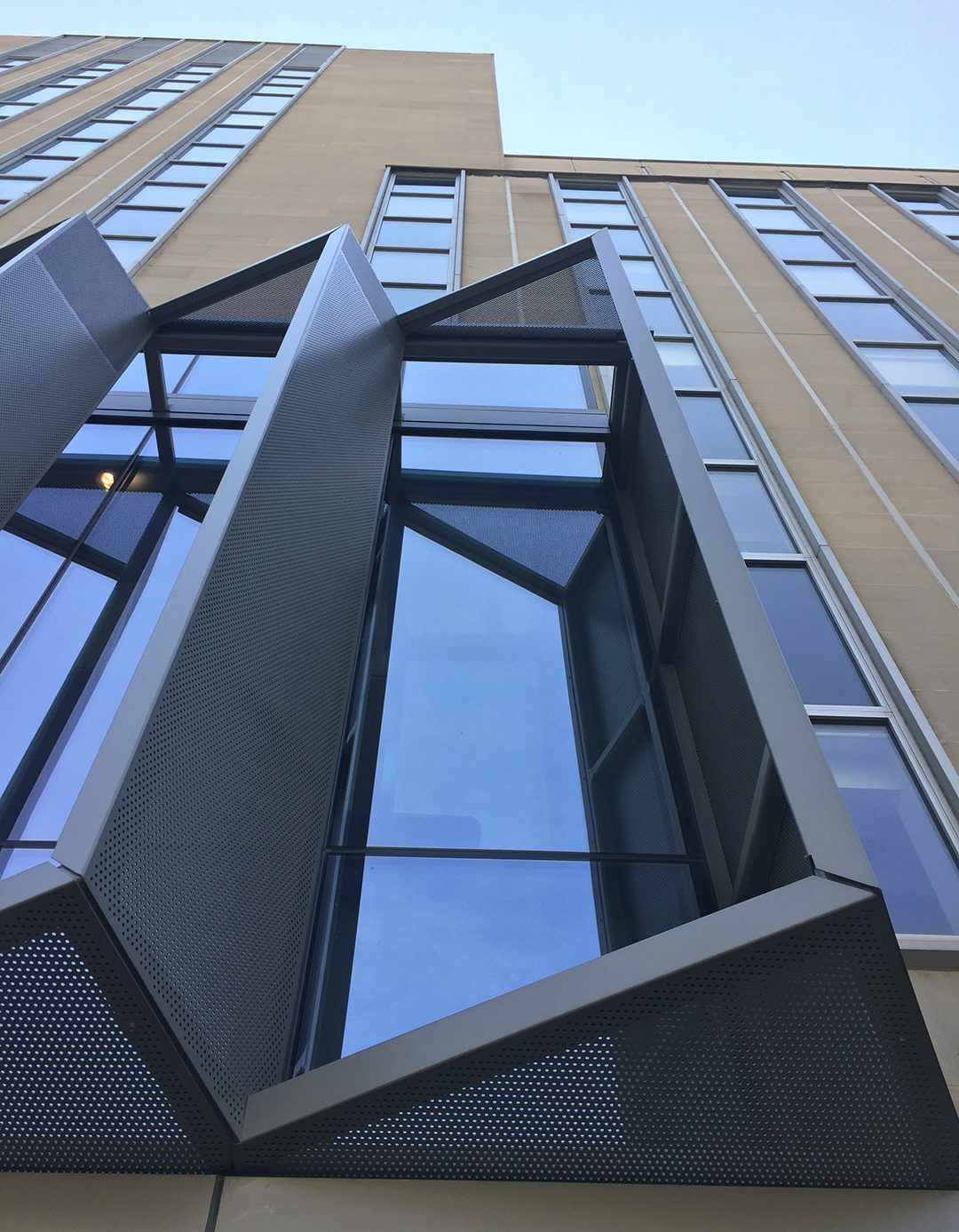 The aluminum sunshade features two different types of perforations. The panels change in opacity from more opaque to transparent along the slope of Terrace Street. Looking at the addition from the bottom of Terrace Street, one can see the structure of the sunshade and look directly into the addition. Looking at the addition from the west, the perforated panels obscure a direct view into the student lounge.  Despite the prediction of rain, we lucked out with a beautiful sunny day and were able to capture how the sunshade transforms throughout the day—from morning to afternoon sun and from opaque to transparent. 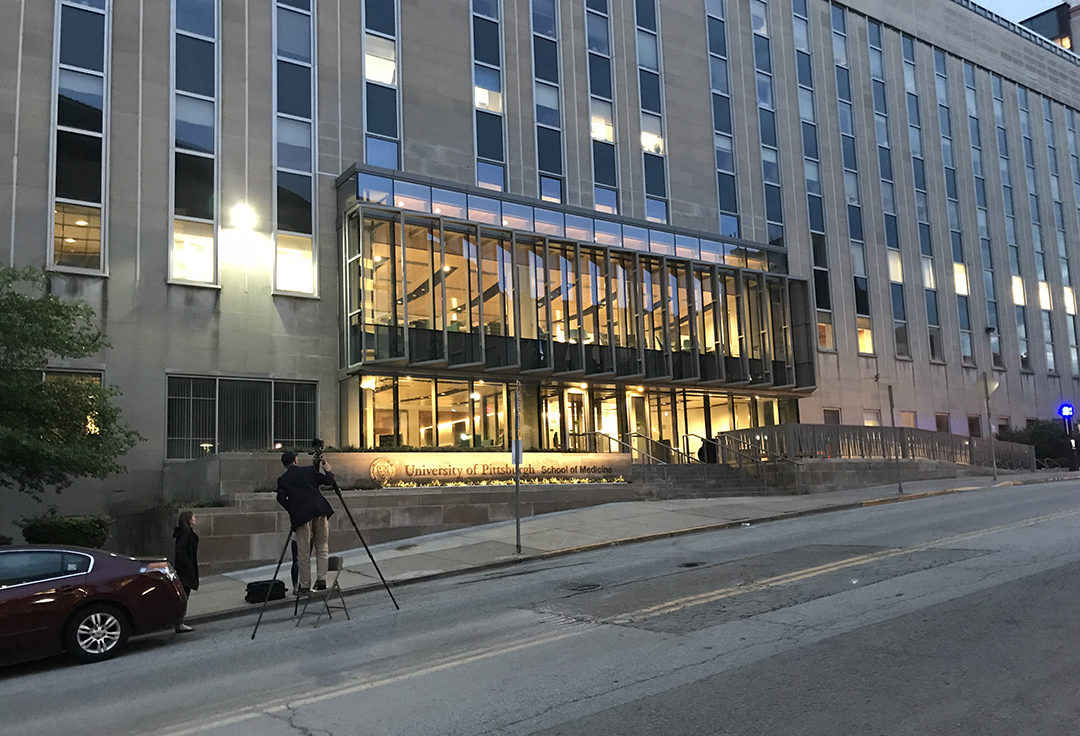 Careful maneuvering had to take place to in order for Warren to capture the exterior dusk shots. This included standing on a chair in the middle of the street (with safety precautions taken), managing cars parked outside, patiently waiting for the magical dusk light and moving quickly to different vantage points once dusk arrived. 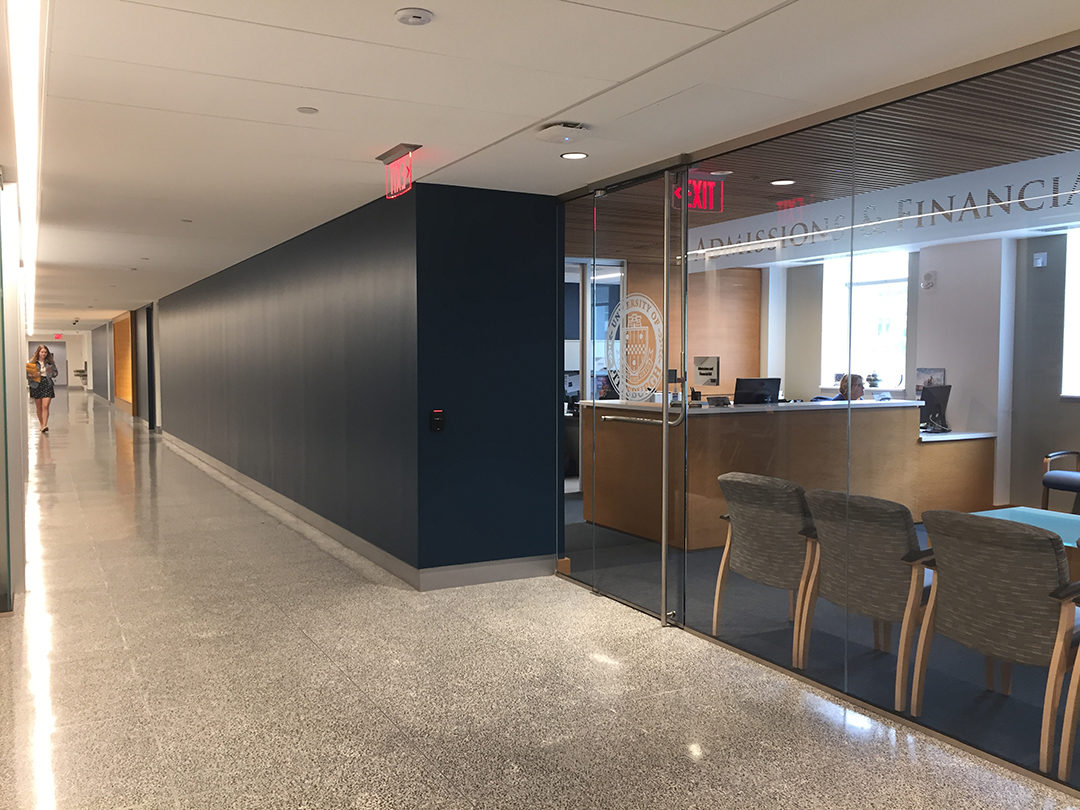 Photographing the interior of the addition and renovations presented a different series of challenges. It was fun to help and watch Warren photograph a variety of interior spaces including new monumental stairs, elevator lobby with an interactive mutli-media display, the new student lounge and café, and the renovated admissions corridor. 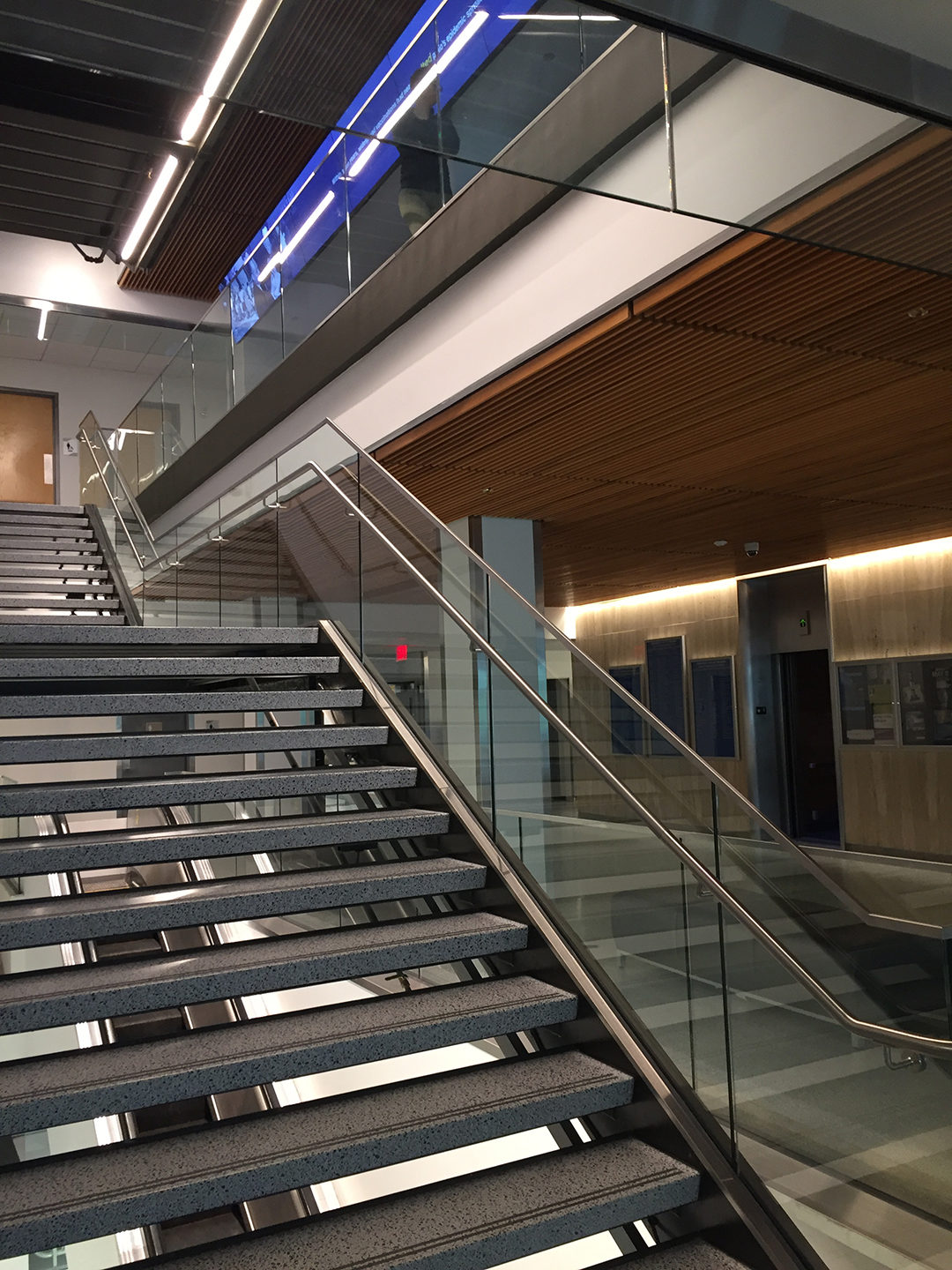 Since the new lounge has already become a hub of activity for the medical school students, we were able to photograph the students and faculty as they typically use the space. Sometimes this meant we had to wait for breaks in the schedule as classes ended, in order to capture the energy of people in the lobby or around the stair. We helped Warren rearrange furniture as needed, block light and also served as models. I even got to make my hand modeling debut! Warren filmed me and a medical student using the touch screen of the multimedia tribute wall exhibit to capture the multiple levels of interaction the tribute wall offers. The exhibit highlights the contribution and transformative discoveries made by University of Pittsburgh School of Medicine pioneers including Maude Menten, Jonas Salk, Bernard Fisher, Thomas Starzl and Peter Safar.

Getting a behind-the-scenes experience at architectural photoshoots illuminate the vision and efforts that contribute to capturing a space. No detail is too small or unimportant. It may take an entire day to capture the space or get the lighting correct, but after all of the hard design work, its time very well spent.