The interface between a cleanroom and the rest of the building can be a complicated, important line – all about explaining science and complex mechanical systems to passers-by, while keeping the research pure and the visitors safe. That’s hard enough when visitors are on one side of the cleanroom, but what if they are on all sides? It’s easy for a cleanroom architect to feel surrounded.

In my introduction to cleanrooms, I explained why cleanrooms often take an “interlocking fingers” shape: clean research spaces supported by return air / service chases. The clean bays are connected by a clean aisle; the chases are connected together too. It’s a very simple diagram. 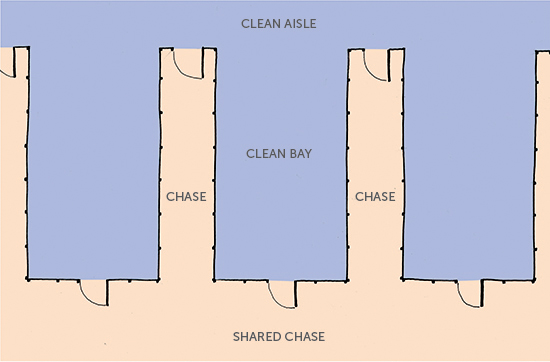 Of course it couldn’t be that easy. For a recent research project, the users made two specific requests. First, that the clean aisle be down the center, to provide shorter, more separate clean bays to ensure delicate research wouldn’t suffer from too much foot traffic. And second, that the viewing corridor be arranged so that a tour group can see into every clean bay, without ever entering the clean envelope.

After two days of very productive sketching with our users at the Nano3 facility in San Diego, the cleanroom looked like this:

Taking away that shared chase provided an endless supply of challenges during the later phases of coordination, and with the users we came up with a set of gowning and lock-out procedures to enable the chases to be accessed from the tour corridor. But even while we were squaring away all the functional aspects of the cleanroom, we had to think again and again about that very long boundary wrapping all the way around the facility. What would the skin of the cleanroom be?

We weren’t without context. The shell and core of the building had been designed by Payette working with Herzog and de Muron (HdM), and HdM provided images of the public spaces as part of their final documents: 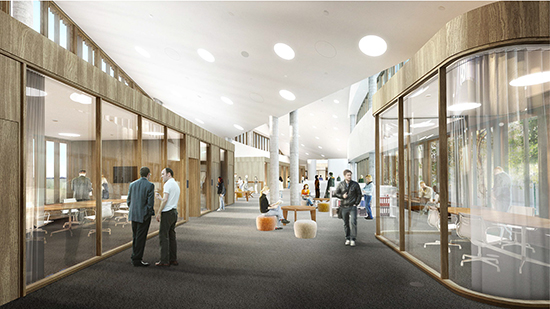 We decided to develop a new language based on the interplay of glass and solids HdM used to skin the curved volumes of offices and conference rooms, but the elevation of a cleanroom has more going on than the average office. Here’s a very simplified diagram of what comes up against the skin – visible are the plenums above each clean bay; the walls which separate the bays and chases, and the exhaust ductwork and other services in each chase:

And here’s what absolutely has to be part of the skin:

We knew we wanted to show off the research and support spaces with equal emphasis, while creating visual interest and meeting all the functional needs of the cleanroom behind the skin. Through a series of studies, we developed a double row of panels, allowing the upper and lower bands to independently use a pattern of mullions and materials appropriate to what they contained.  In the highly regimented space of the cleanroom, this was a rare chance to add a dynamic element.

With our concept roughed out, all that remained was to work out the details through a few dozen studies… 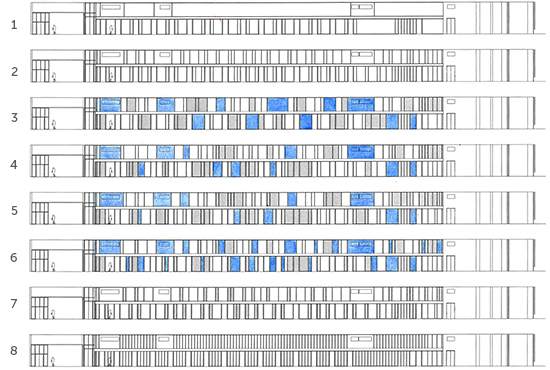 In the end, after all the coordination meetings and design iterations, it all came together. Without a shared chase, and with a continuous tour corridor, we brought the base building’s design language into one of the most complicated and sensitive labs in the project and used that skin to make the science (and the function of the facility) accessible to the students. 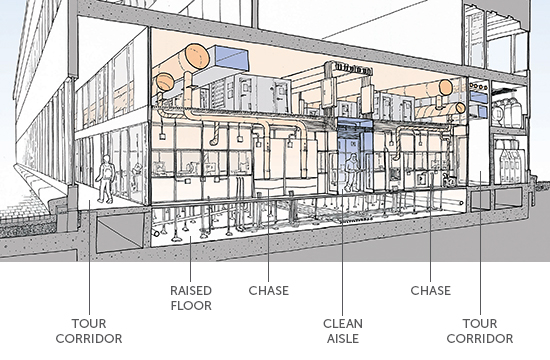