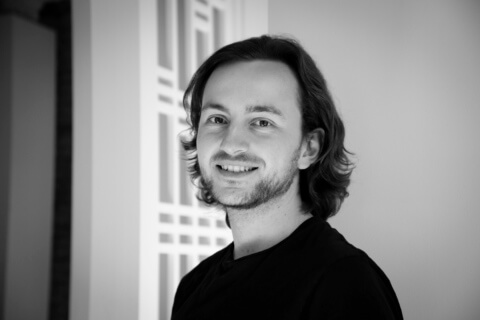 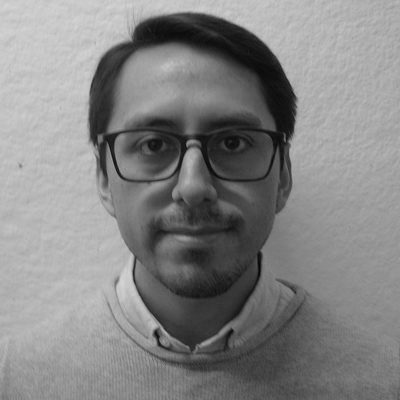 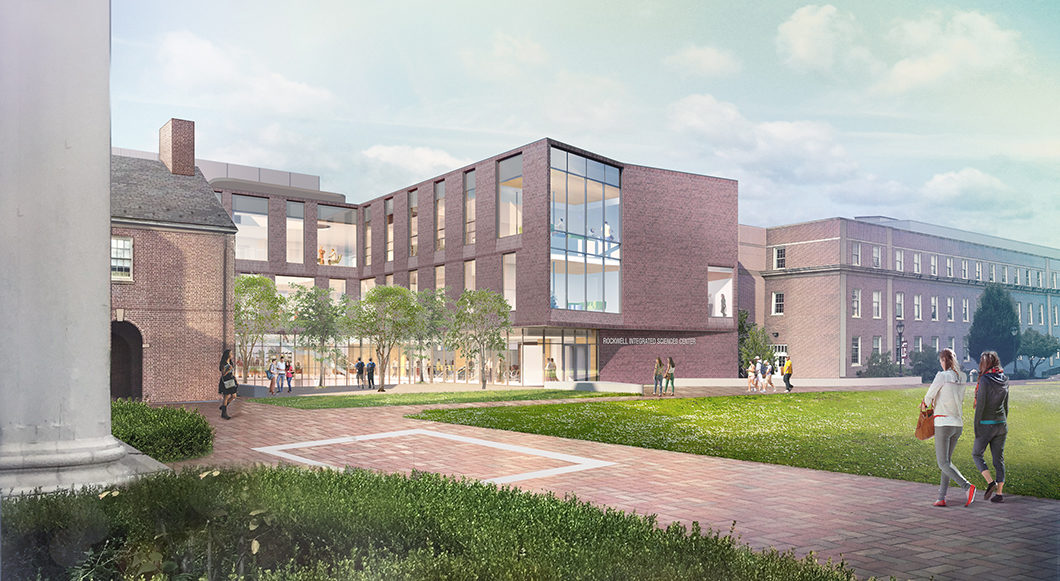 Construction of the Lafayette College Rockwell Integrated Sciences Center (RISC) started last fall with the removal of service buildings at the back of Anderson courtyard. This created space for the new sciences center to be built between the two buildings along the courtyard edge. Our design partially embeds the five story building underground; only the top three floors are visible from the Anderson Courtyard. In order to locate the RISC between existing buildings, extensive foundations and retaining walls needed to be built and carefully waterproofed, especially where the new building connects to the neighboring Acopian Engineering building. By building in tight conditions, the level of tolerance is at a minimum and both the construction and design teams found several challenges, where quick solutions had to be developed. After many months of removing rock, extensive coordination and pouring concrete, the foundations are nearly done. The next step is to start pouring the slabs on grade and continue to the upper levels.

In early March, steel columns and beams were erected. Most of the larger pieces of steel have been installed, framing the overall volume of the building. The steel frames also give us the opportunity to get our first glimpse of the complex geometry of the atrium at the heart of the project. 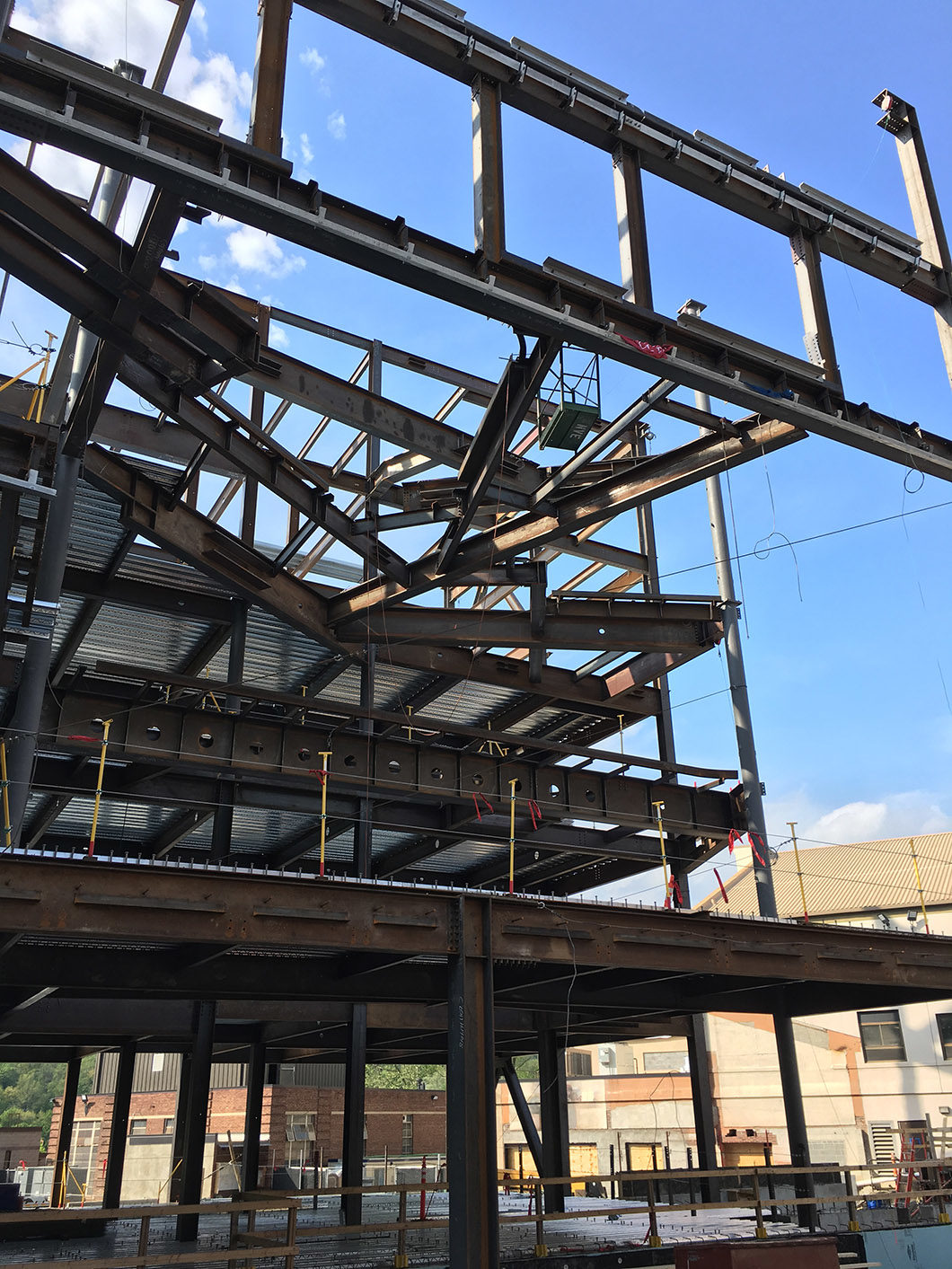 The metal decks are being installed now and soon will further define the edges of the atrium. The location of these pieces at the atrium have been carefully coordinated to allow the monumental stairs to fit within the complex atrium openings. 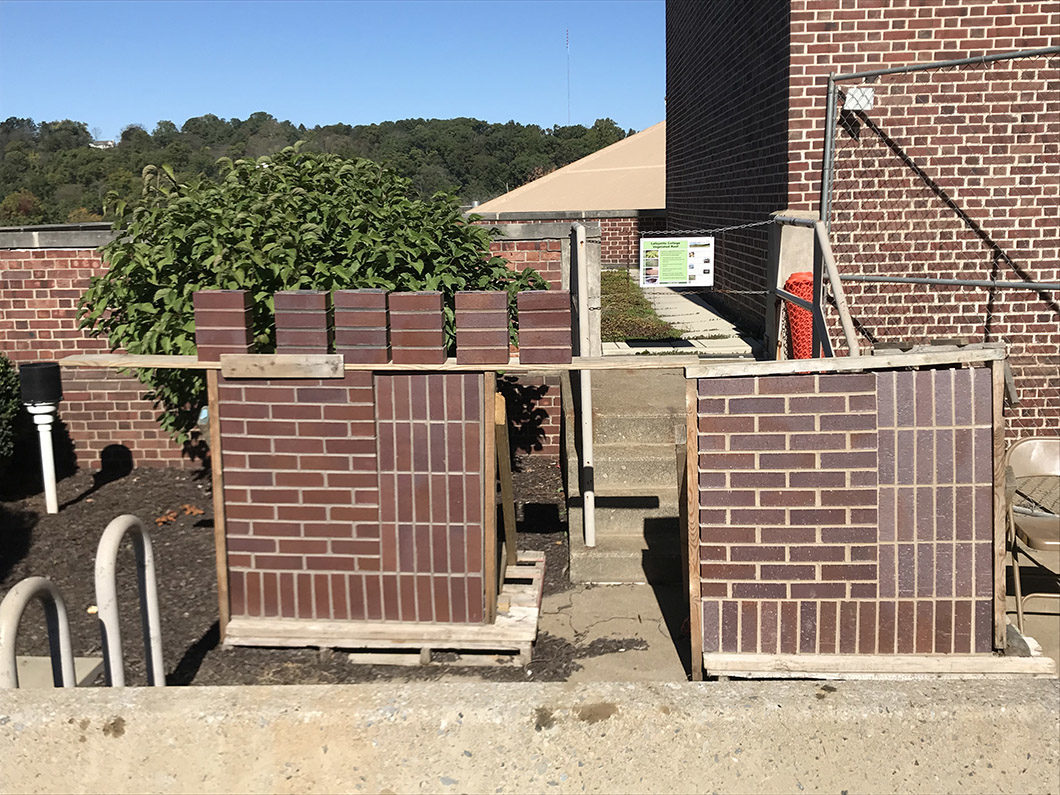 There are many other moving parts in the construction process. For example, the mason built a brick mock-up 4′ by 4′ to test the brick and mortar colors as well as the brick assembly. Underneath most of the windows, the brick wall tilts inward to align the building face with the mullion, creating a carved effect at the windows. This also gives a subtle angle change to reflect light differently and activate the large brick facade. We were pleased when the brick mock-up had noticeably different reflections off of the vertical and tilted surfaces. 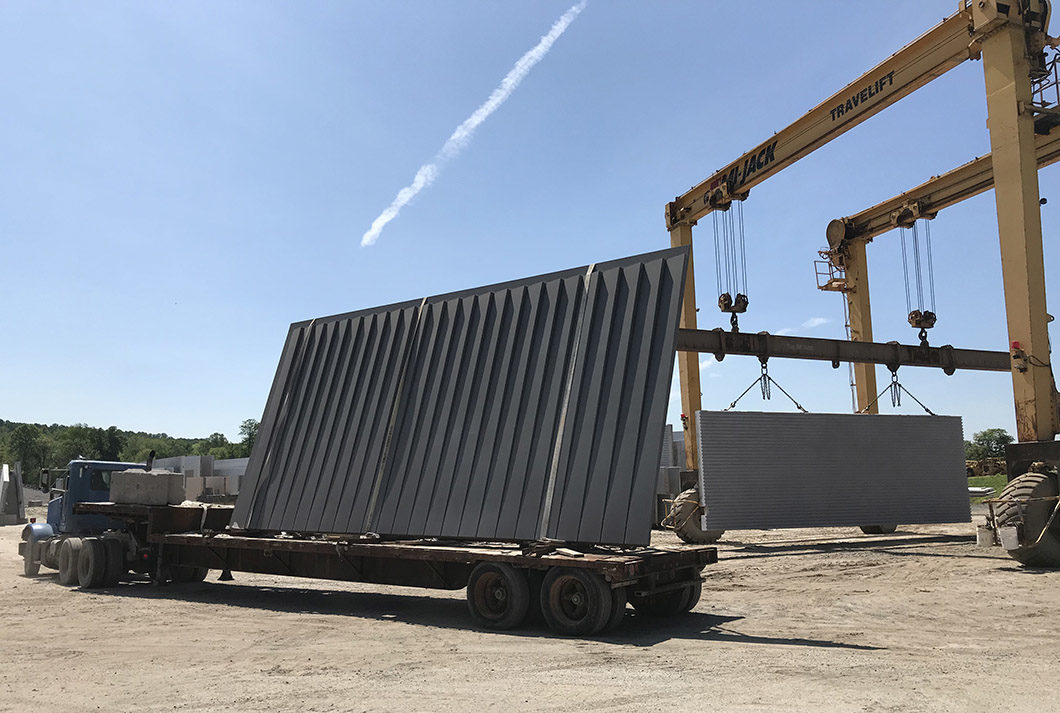 Another recent successful mock-up was the large 14’ x 24’ precast concrete panels for the north side of the building. Recently, members of our team visited Universal Concrete Products (UCP) outside of Philadelphia to see the molds and full scale mock-up. It is amazing how big each piece is; one piece barely fits on an 18 wheel truck (image). This mock-up turned out very clean and crisp after having some wavy deformations in earlier attempts. The contractor has already started the fabrication of all pieces and will be installed at the end of summer.

Overall, construction is moving fast and the building envelope mock-up will be made within the next month. Our team will review how the curtainwall ties to different assemblies, such as the floors, exterior walls and roof. Additionally, a room has been assigned in the neighboring Acopian Engineering building for the construction of a lab mock-up to show the client different elements, such as casework, ceilings and interior finishes.

“I was speaking to the architect today at Lafayette and he wanted to let me know that their firm (Payette) considered our drawings the best they’ve ever gotten. Not just on this particular job, but in general.”
Glad you can see the difference and appreciate the value.
Great shop drawings is our mission and we’re right down the street in Fleetwood PA!