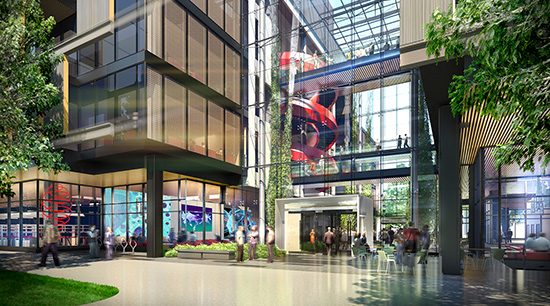 The monumental red spiral staircase that will connect 75 and 125 Binney Street within the building’s atrium was inspired by Ariad Pharmaceutical’s logo. The red, spiraling spool of thread in the logo, which represents pathways leading scientists to discoveries in medicine, encouraged Payette’s Alexandria design team to create the similarly dynamic staircase, a custom feature which the team refined during colocation in Cambridge.

The stair underwent many design iterations before a final profile was reached. In its earliest stages, each flight of the stair had a unique radius and profile, most similar to the logo itself (image 1). As the stair developed, the radius became the same for each flight and the profile changed shape as it spiraled from the bottom floor to the top (image 2). In the end, the profile of the inner curve became rectangular and the outer curve maintained a continuous beveled profile (image 3). While the profile underwent many variations, the design intent was always for the stair material to be a continuous, solid surface. For that reason, Krion – a solid surface material manufactured by Porcelanosa – was chosen because sheets of the material can be thermoformed into curved pieces and then seamlessly welded together to create one continuous smooth surface.

Using collaborative BIM project integration, an interesting workflow was employed to model and develop the spiral stair. The Alexandria design team worked on site at colocation with the Krion and steel fabricators to create a 3D model that integrated the Krion cladding with the steel substructure to ensure continuity of geometry. In merging the work of the different entities, AutoCAD, Rhino, Inventor and Revit was used. Although each company used a different program to execute their work, colocation allowed the different parties to tackle design issues, brainstorm solutions and clearly communicate details to each other, so that as the profile, dimensions, and details changed, all aspects were adjusted accordingly.

Workflow:
Prior to colocation, the Alexandria team generated a 3D model of the staircase with the intended profile in Rhino. The steel fabricators used Inventor to model the curved steel plate stringer and tread assembly. Using the steel model, the Krion fabricators detailed the cross-sectional profile in AutoCAD, where they were able to detail the blocking for the plywood ribs that will attach to the steel and serve as the substructure for the thermoformed Krion panels. The architectural Revit model allowed the design team to adjust and check the profile so that its location and detailing met the design intent. In Inventor, the Krion cladding was modeled using the AutoCAD detailed profile and integrated with the steel structure. The design team was then able to import the model back into Revit. 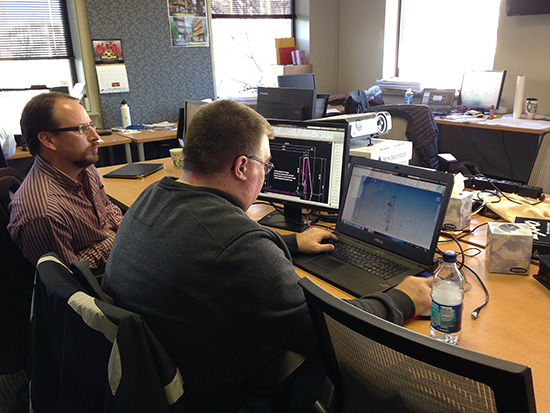 The Profile:
The geometry of the final profile incorporates a ½” reveal joint that aligns with each floor level in addition to a ½” reveal located at all openings of the adjacent plaster accent wall, from which the spiral stair projects. An inset vertical white Krion panel, offset a set dimension from the surface of the stair tread, accommodates a flexible LEDlight fixture within a light cove.

The height of the profile was dependent on preserving the minimum code requirement of 42” for a guardrail. The project’s floor to floor height determined the height of the spiral, but the landing in the stair required three critical sections to be the drivers in determining the final profile. The cross-sectional profile at the start, mid-way landing, and top of the stair had to address the worst case-scenario of the lowest height in profile. While the guard is higher in some areas than others as one ascends/descends the stair, the outside Krion profile remains continuous. Because the stair treads rise at a different slope than the spiral, the inside of the outer curve needed to be adjusted to follow the treads in order for the light cove to be a continuous distance from the nosing of the treads.

The next step in the spiral stair process will be off site production of final shop drawings and material fabrication, followed by installation on site. The steel structure for each of the three flights of stairs will be fabricated off site in two pieces, with the landing dividing the two. Each flight weighs approximately 11 tons, and will be lifted into place via crane. The landing and two halves will then be field welded on site. The Krion cladding will be thermoformed in 6’ panels, then assembled and welded together on site.

Neither the Krion nor the steel fabricators had heard of colocation before working with the Alexandria team. However, both remarked on how much they enjoyed the two week colocation experience and how the collaboration sped up the overall process. The Krion fabricator even commented on how elements of our design inspired ideas for future projects. All of us benefited from sharing our knowledge of different 3D programs and learned from each other while developing the spiral stair at colocation. 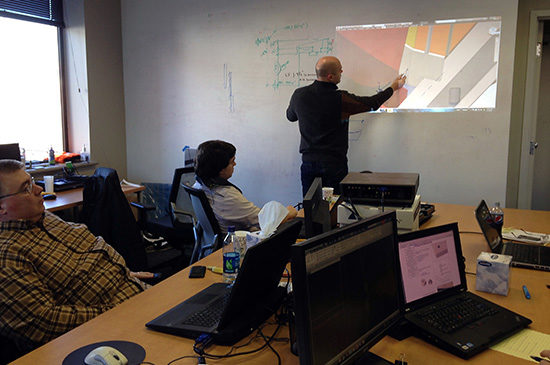 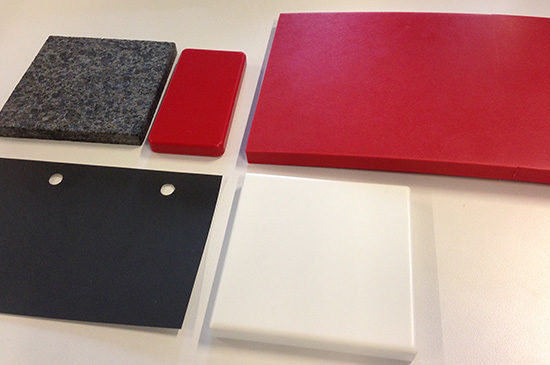 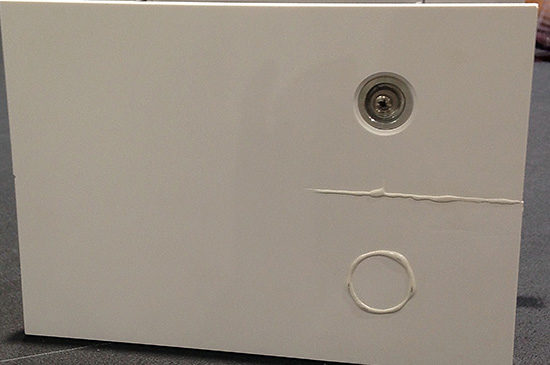 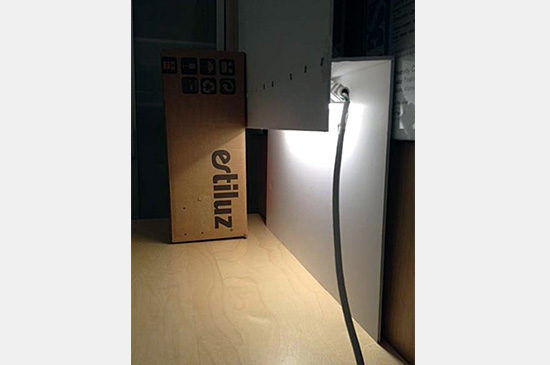 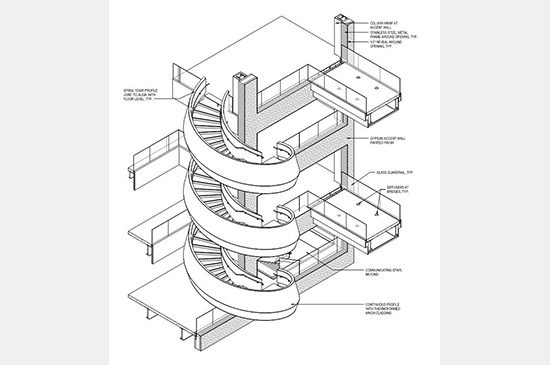 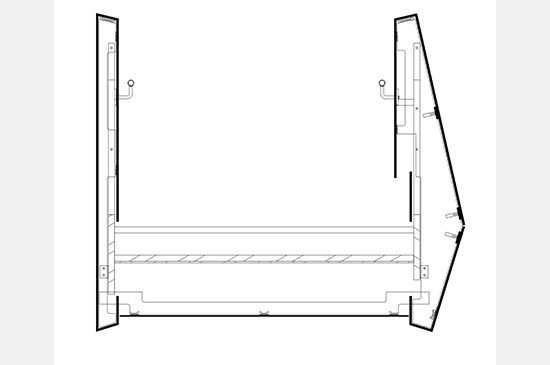 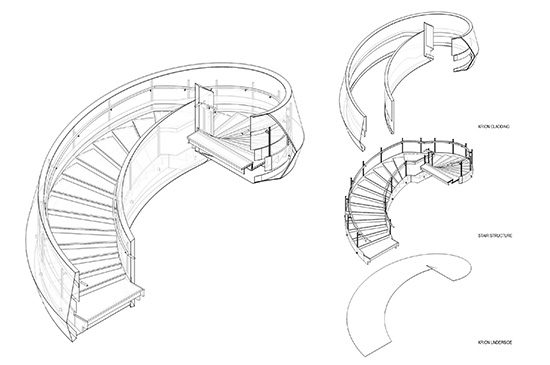