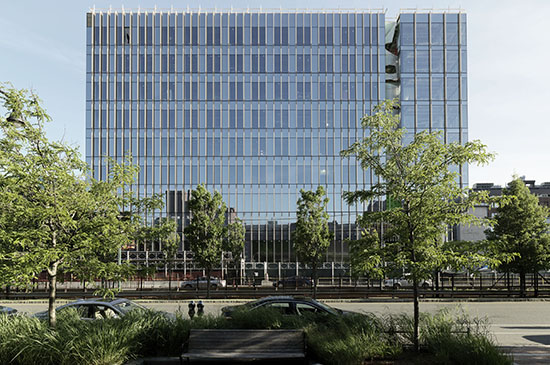 Payette’s new Center for Integrated Life Science & Engineering (CILSE), nearing completion on Commonwealth Avenue one block west of Kenmore Square on Boston University’s Charles River campus, is one of the first projects in the US to employ large-format, glass-fiber reinforced concrete (GFRC) fins and panels. These products are being manufactured by Rieder Smart Elements GmbH, under their ‘fibreC’ product line, and are being erected by Ipswich Bay Glass.

Driven in large part by the need to maximize programmatic flexibility on a relatively compact 20,000 GSF lab footprint, CILSE’s rectilinear massing is also a sympathetic nod to the square-shouldered, deco-Gothic blocks developed by the University’s early designers, including Ralph Cram, in the 1940’s. However, in contrast to the weighty masonry appearance of these buildings, the University desired a much more transparent skin for CILSE, one capable of revealing the cutting-edge scientific research happening inside its most high-technology building constructed to date.

Nevertheless, an all-glass skin struck the design team as overly commercial for this urban campus, particularly in the face of other recent commercial developments nearby. CILSE offered an opportunity to reinforce the fabric of BU’s campus, which has a distinct and coherent architectural identity, by expressing itself clearly as an academic building. CILSE’s prominent gateway location, plainly visible from Kenmore Square rising over the copper-dome Morse Auditorium, only strengthened this conviction. And while the majority of the university’s recent buildings have followed the red brick of historic townhomes along Bay State Road, we looked instead to establish a dialog with the core campus buildings grouped around Marsh Plaza, further west along Commonwealth Avenue, most of which employ a motif of repetitive vertical bays built of buff-colored Indiana limestone. 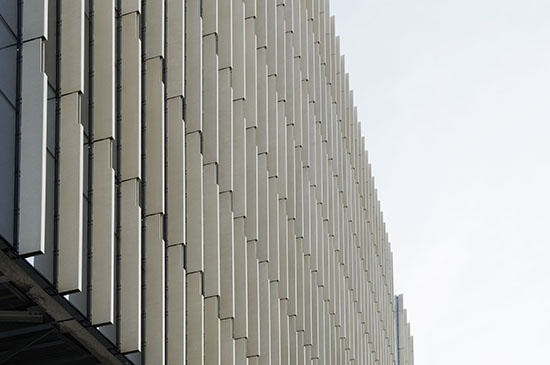 The use of GFRC offered an ideal means to achieve these dual objectives. While the technology of embedding glass fibers in concrete was pioneered in the 1940’s, the development of alkali-resistant glass fibers in the 1970’s led to increased use. Today’s GFRC is a thoroughly modern material, with a strength-to-weight ratio that vastly surpasses what can be achieved in conventional precast concrete. Rieder fiberC’s GFRC panels are only 0.5 inches in thickness, yet can be formed into panels of remarkable size. Moreover, the material can be worked when wet, prior to curing, enabling it to be folded into more complex forms. Available in a range of standard colors and textures, it is very sympathetic in overall appearance to Cram’s limestone.

These properties were uniquely suited to the challenge associated with articulating the skin of CILSE, a nine-story mid-rise block with two contrasting façade typologies. On the two sides where CILSE abuts public space — to the north, along Commonwealth Avenue, and to the west, where it overlooks BU Grounds South (a prominent campus open space) — a vertical pattern of 4-inch wide glass-fiber reinforced concrete fins project 14 inches from a taut, highly reflective, glass surface. These fins are, in fact, continuously-formed U-shaped GFRC channels, pre-supported from the curtain wall via an ingenuous system of pre-assembled mechanical anchors.

While the technology exists to create sharp right-angle bends in the concrete (the favored approach for European applications), these channels were deliberately formed around a pronounced, 8mm radius, a detail selected to highlight the material’s thinness and plasticity. 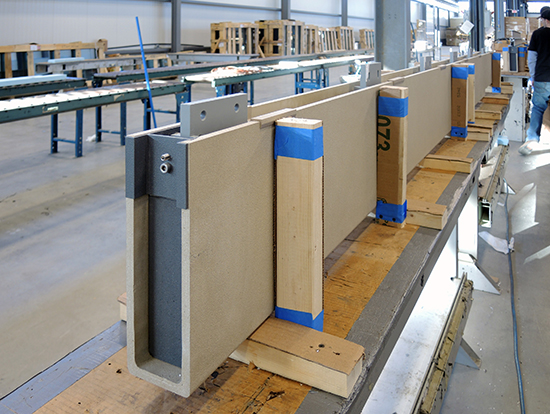 Tightly spaced along most of the long Commonwealth façade, the fins alter their cadence as they approach and round the corner. At floor levels, shallow cuts in each channel, infilled with contrasting grey GFRC, introduce a secondary horizontal counterpoint to the façade’s predominantly vertical grain, and produce a conspicuous diagonal effect when seen from street level. Along these “public” facades, where the building is viewed in the oblique when traveling along Commonwealth, the combination of vertical fin and reflective glass works to particularly dynamic effect. From a distance, where there is little or no visible gap between each pair of fins, the wall appears entirely solid. As one approaches, however, these gaps progressively increase until the fins all but disappear, momentarily rendering the skin almost entirely reflective, before the phenomenon reverses itself and the building’s earthly materiality reasserts itself. 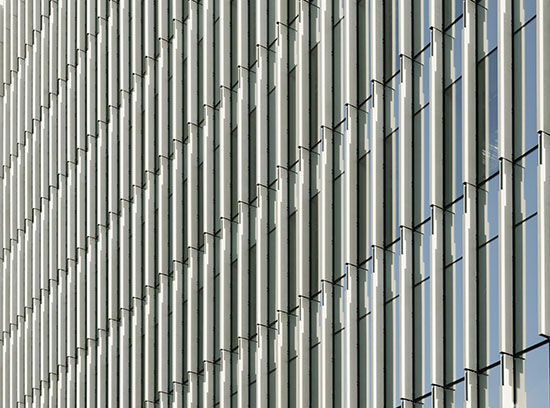 CILSE’s remaining two facades are inward-facing, each sharing a narrow campus courtyard with an existing structure. Programmatically, support labs and other building service areas are located along these sides. Absent the public realm frontage and need for expansive glazing, these facades called for an alternative tectonic and compositional approach to the channels.  However, the simplicity of the building’s massing strongly suggested staying within a tightly prescribed material palette. Here, to maintain the regular vertical cadence initiated on the public facades, the GFRC was formed into large panels, each one precisely corresponding in width to the glass interval between pairs of fins on the building’s public side. 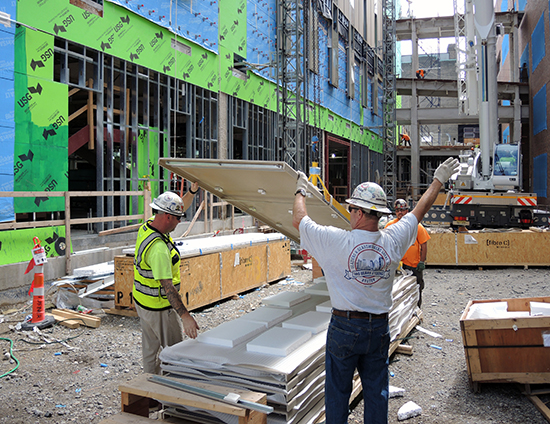 Separated by a deep contrasting reveal, equal in width to that of the fin, these GFRC panels employ the same continuously rolled edge found on the channels, rendering them U-shaped as well. The panels are anchored directly to an insulated, engineered stud backup wall; the open joints of rain screen wall construction clearly evidence the GFRC’s extraordinary thinness. Alternating vertical bands of flush-set windows, covered in ceramic fit color-matched to the GFRC, complete the pattern. 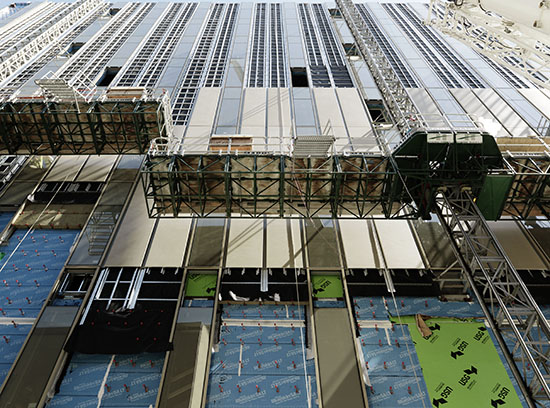 Special attention is paid to the two corner locations where the GFRC transitions from fins to flat patterns. Because the cladding systems are abruptly terminated at the large, three-story corner cutouts at the building’s base, the manner in which a fin morphs into a flat panel is particularly evident. 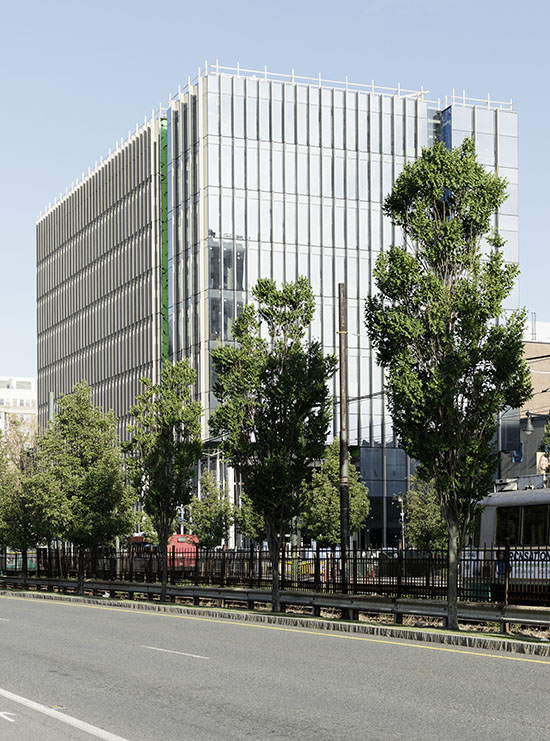 The resulting visual effect is highly unusual. A singular building volume is articulated simultaneously as both immaterially crystalline and impassively opaque.