In a competition environment, the challenge is often to demonstrate what we know (and that we know it) to an audience who may not be familiar with every type of specialty facility, while also showing the architectural quality of our design proposal. More, this often needs to be done in very few images and even fewer words!

I had an opportunity to attempt this as part of our proposal for a recent academic building project. My goal was to explain the nanotech cleanroom and its place in the building in only two images.

The first drawing shows the “easy” part – it is only the technical complexity of nanotechnology research cleanroom. There’s more detail in my previous discussion of cleanrooms (What’s a cleanroom and how do I make one?), but the basics are all here: the clean bay with laminar air flow, the return air chase with bulkheaded equipment and services, and the suspended plenum and HVAC systems above. 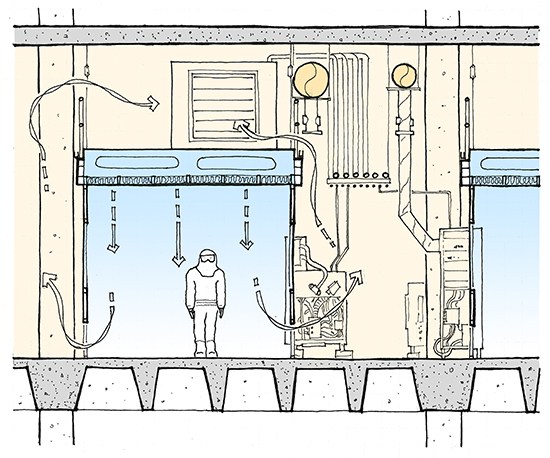 The second drawing shows the harder part – the way our design fit the cleanroom into the larger architectural scheme.

Of course it also shows the main mechanical distributions and how these feed the branch pipes and ducts shown in the first drawing, but the most important part of this drawing is picked up in the two figures at the left: a student in public space, separated only by a glass wall from a clean-suited researcher inside the facility. We took advantage of the need to slope the public corridor to allow the students to look down on the research activity, while also looking up into the mechanical spaces that make the cleanroom work. 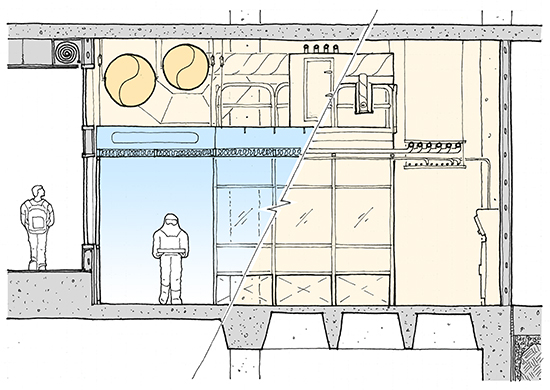 As before, the goal of this image is to convey the basics to a lay audience, while having the details present for those interested in the next level. Visible are the fire shutter in the ceiling which provides the required code separation between the research space and the public corridor, and the slab joint which provides the vibration separation between the cleanroom and the loading dock.

Beyond the competition itself, these images have been useful aids for discussions on everything from cleanroom minutia to general principles in our pursuit of making science accessible and visible to the public. Many of these discussions informed the design of my next cleanroom project.

Great Article. I appreciate the vision after being in the industry for quite some time.
-Rocco
Berkshire