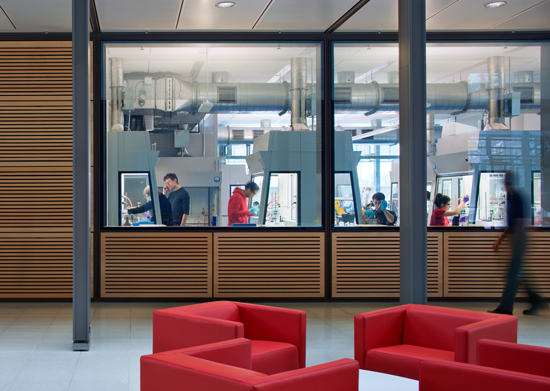 Judging has wrapped for the 46th annual R & D Magazine Laboratory of the Year competition. Payette is pleased to announce the Princeton University Frick Chemistry Laboratory has been awarded High Honors. See the press release on R & D Magazine’s site here and learn more about the project.

Princeton’s new Frick Chemistry Laboratory moves the entire Department of Chemistry at Princeton from the nation’s oldest chemistry laboratory to a new state-of-the-science facility. The result of a collaborative design effort between Payette and Hopkins Architects of London, the new structure is equipped with both cutting-edge and sustainable amenities and is to be a State-of-the-Science facility for academic chemistry research and teaching, and is to play a strong role in recruitment of top-tier faculty and an expansion of student chemistry majors. The building supports the expanding focus of research for the department in chemical biology, energy, catalysis and chemical synthesis and materials, with the goal to achieve advancement into the top chemistry programs in the country.