Payette, a leading architectural design firm in Boston recognized for creativity and vision in the design of transformational environments for science and healthcare, announced that Kevin B. Sullivan, FAIA has been named President, effective January 1, 2014.

After 15 years as the President of Payette, James H. Collins, Jr., FAIA is preparing to step down and focus exclusively on his craft as an architect. Collins will remain a Principal who is fully committed to his clients and design projects. During his tenure as President, Collins not only raised the design profile of the firm, but instituted innovative sustainability and research initiatives, furthering the firm’s ability to solve complex problems creatively.

Payette, a firm that prides itself on its collaborative, innovative process, is structured to allow partners to play a major role in governing the firm. As a collective think tank, the transition to a new President is a natural progression in the evolution of the firm. Payette, founded in 1932, has been through several leadership transitions. Collins is a third generation leader of the firm, having succeeded Thomas M. Payette, FAIA, RIBA in 1998, who succeed Paul Nocka and Frederick Markus, founders of Markus & Nocka in 1932 (later renamed Payette Associates in 1974).

“I’m thrilled to provide Kevin with the same opportunity that Tom gave to me,” said Collins. “The opportunity to assume a major leadership role in the firm at the midpoint of my career allowed me to be part of an entire younger generation of leadership that was incorporated into the firm at all levels. I’m excited that we will now have such a qualified and inspired leader as Kevin, to not only lead his generation of the firm, but to lead all of us as well.”

“I am humbled and honored to have the opportunity to follow such inspirational and thoughtful leaders as Tom and Jim,” said Sullivan. “Each of them elevated the firm to a new level during their time leading the firm. Tom took the firm from a regional healthcare practice to a national leader in high technology buildings. Jim brought increased focus to the firm’s design and sustainable initiatives. Looking forward, I plan to build on their momentum to further elevate the thrust and vision of our design practice.”

With 26 years of experience at the firm, Sullivan will continue to advance Payette’s exemplary model of practice, which balances technical pragmatism with creative design vision. Sullivan will assume the role of President January 1, 2014. 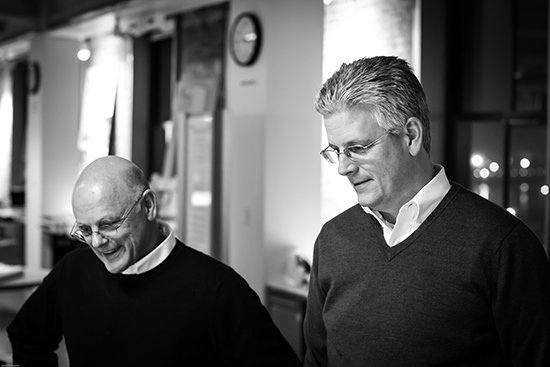 Congratulations Kevin, what fantastic news! Jim, even from a distance I have seen the way the firm pushed forward under your leadership. I have smiled watching and hearing about the successes of the firm over the years. Happy Holidays to you both and best wishes to you in the next steps,
Happy New Year
Antonia Bellalta

Congratulations Kevin and Jim!
I am honored to work with both of you and watch the firm continue it’s great legacy of excellent architecture with the values and energy founded in Tom and the partnership that has grown around these principles.
Carry on the tradition, strive for excellence

This is great news for Payette and for Architecture, and congratulations to you Kevin. We are delighted to be a Payette client here in NUI Galway and work is now well underway on your third and final building from a €76M Euro bundle of arts humanities/social sciences, biosciences/cell biology and cancer research buildings. We couldn’t be happier with the services we get from Payette, and the ocean between us makes no difference. Looking forward to seeing more of the Payette Pencil in Ireland and the rest of Europe in the future.

Great news — congratulations to Jim, Kevin and all of Payette.

Very exciting news for Payette. Congratulations to both Kevin and Jim.

Another healthcare project has been completed. Check out one of the positive comments our client made: “I was impressed by the friendly personalities of the staff, and also by the beautiful redesign of the facility. The light fixture over the reception desk and the ripple wall behind it are stunning, and the three large framed color photographs in an interior waiting area are restful and beautiful. The architects have done extremely well.”

Despite all the new challenges past year has brought upon the world around us, our projects are still on track and beautifully executed. Stay tuned for the finished photographs and more project updates!

#designexcellence #healthcare #architecture #architecturerender #mgh
@payettepeople 5 Mar
Back at it with @beyondwalls in our FabLab and then on the road to Nashua, NH. https://www.payette.com/cool-stuff/fold/ … #probono #fabrication #communitymatters pic.twitter.com/dzCCLnx6Fk
@payettepeople 17 Sep, 2020
Our Women In Design group is back in the FabLab, getting us back in the office. Check this out... http://bit.ly/WIDBackInTheOffice … #fabrication #maker pic.twitter.com/pkmD4U8pBV
@payettepeople 15 Sep, 2020