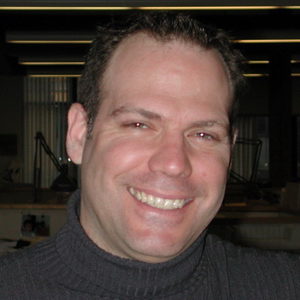 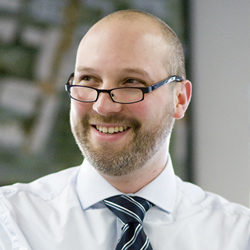 This month Lab Design published our article about the next generation laboratory and the evolution of laboratory design.  We’ve shared an excerpt of the piece here, along with graphics that illustrate the paradigm shift in lab design.

Payette has played a signature role in the evolution of modern labs through consistent innovations and a long tradition of designing influential science and research buildings. More recently, the key components that inform the next-generation lab are an aggressive stance towards energy conservation, a flexible armature that can easily accommodate shifts in research density spanning from a Principal Investigator (PI)+4 to a PI+10 planning module and an integrated approach for computationally based research.

The Biosciences Research Building (BRB) at the National Univ. of Ireland, Galway (NUIG), currently pursuing BREEAM (Building Research Establishment Environmental Assessment Methodology) Certification of “Very Good” (equivalent to LEED Platinum), is one of Payette’s most recent examples of innovation in energy conservation and building performance. The building employs a high-energy/low-energy sustainability strategy, which places the most mechanically intensive spaces, such as tissue culture and imaging suites, into a zone adjacent to the traditional open lab space. As a result, high-energy use spaces that are densely occupied can have direct access to the natural light at the building perimeter. Low-energy use spaces, such as writing carrels, offices and interaction spaces, are also grouped along the perimeter to optimize natural ventilation and daylighting strategies. The building has the lowest energy profile of any major research facility Payette has designed, with 50% of program areas naturally ventilated. Initially programmed for a PI+6 baseline, the building has been occupied at a density of PI+9 and is thriving. Through a rigorous post-occupancy evaluation process that explores multiple projects, we have learned which high-performance energy and programmatic strategies really work and why. 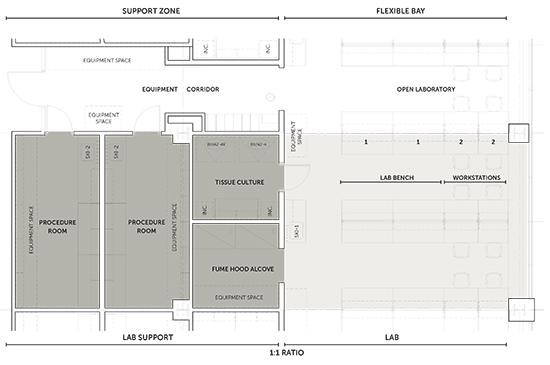 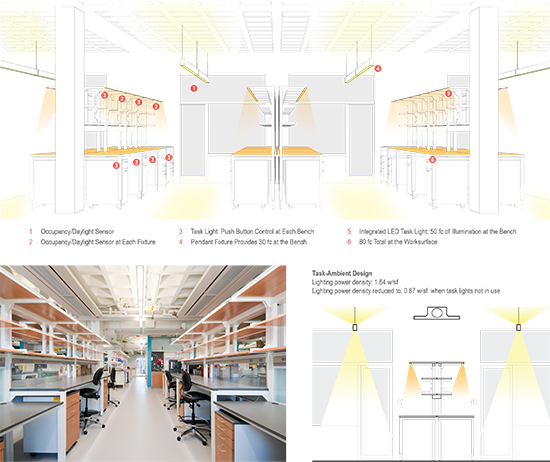 To execute a revolutionary design for lighting a research laboratory, Payette proposed the creation of a new LED task light. In lieu of traditional under counter lighting that can be blocked by equipment, the team designed the new fixture to attach to the leading edge of an extended upper shelf, positioned to provide optimal illumination while casting the smallest shadow. (Click image to enlarge.) 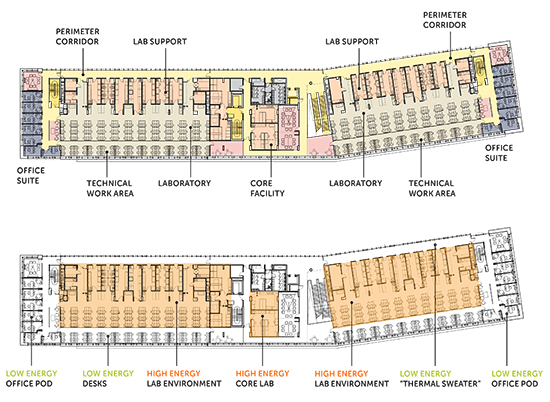 High-energy/low-energy plan organization. The BRB at NUIG wraps the perimeter of the building in a low-energy “thermal sweater,” which is 100% naturally ventilated for cooling. High-energy open labs and lab support (writing desks, offices, public spaces) are insulated by the thermal sweater and are cooled/heated mechanically. (Click image to enlarge.) 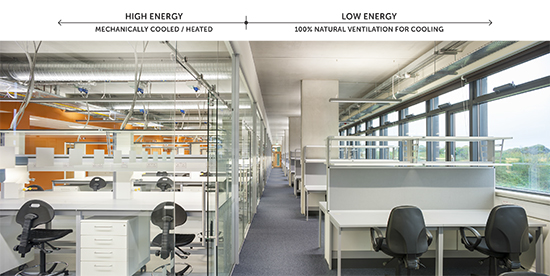 A next-generation lab layout at the NUIG BRB. The photo above depicts the high-energy/low-energy zoning of the next-generation lab. Offices, writing stations and public spaces are separated from the lab environment by a transparent tempered glass membrane. (Click image to enlarge.)

Our EXP team @northeastern has recently celebrated a major milestone with the topping-off of the 350,000 SF research facility so is the West 2 project from the College of Engineering @pennstate that celebrated the completed installation of all the main building structural steels! These achievements represent the culmination of years of dedicated work by the Payette team despite the challenges due to major material and labor shortages during the pandemic.

EXP will mark the conclusion of an almost decade-long vision for a science and engineering complex on the Northeastern campus.

West 2 is tracking LEED Gold, with an estimated completion date in 2022. The building will create a singular programmatic magnet for research, making, testing and prototyping from a broad range of disciplines to become the innovation and making hub of the College of Engineering.

Check out our Blog for more information about both projects and stay tuned for more project updates!