The ability to control electric light in a user-friendly and visually seamless manner became a viable design option for public, commercial, and residential spaces more than 50 years ago with Joel Spira’s invention of the solid-state electronic dimmer in the early 1960s. Initially developed to enhance homes and other interior environments, architectural lighting controls have since developed into systems that are used to create various scenes for retail and hospitality venues, provide security, and conserve energy usage and costs. Today, largely enabled by the capabilities of advanced, high-quality LEDs and digital technologies, lighting controls are being transformed into critical networks that not only effectively illuminate the spaces within and around buildings, they enhance the way these environments are used and inhabited. 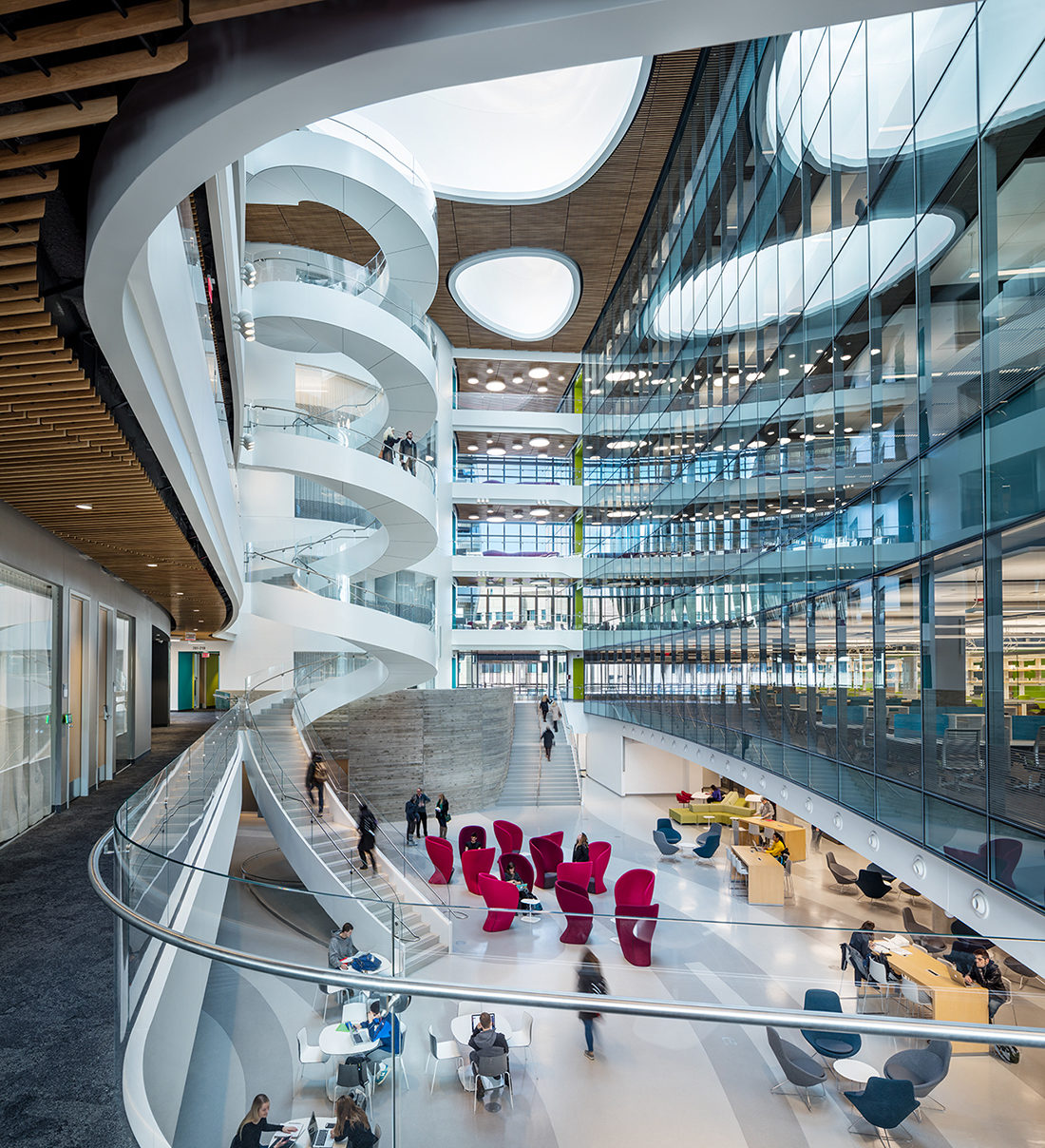 Northeastern University Interdisciplinary Science and Engineering Complex
When architects from Payette developed the concept for the Interdisciplinary Science and Engineering Complex (ISEC) at Northeastern University, they conceived its six-story-tall central atrium as the building’s centerpiece, as well as being a student hub for the expanding campus. They envisioned a dramatic and lively space topped by a generous skylight. But as they developed and refined the scheme, the initial mostly glass roof was transformed into one with three discrete cone-shaped apertures. The aim of this “right-sizing” process, according to Arup lighting designer Jake Wayne, was to eliminate glare in the atrium and ensure quality daylight in adjacent spaces—namely laboratory write-up areas. These look onto the atrium from multiple levels through a glass wall. For those times when daylight is not sufficient, the write-up spaces are illuminated with Peerless linear pendants that bounce light off the ceiling. The atrium also has supplemental LED lighting, including Selux spotlights tucked into balconies at its perimeter and Lumenpulse RGBW linear projectors concealed in coves at the base of the skylights. The latter fixture provides a soft glow so that the skylights are always legible, says Kevin Sullivan, Payette president. Although the building’s fixtures are wired, its Lutron Quantum control system’s components, such as occupancy sensors, photo sensors, and switches, are for the most part wireless, a characteristic that streamlined their installation, says Wayne.

To earn one AIA learning unit (LU), including one hour of health, safety, and welfare (HSW) credit, read the “Continuing Education: Lighten Controls” essay and the case studies above, review the supplemental material listed below, and complete the online test. Upon passing the test, you will receive a certificate of completion, and your credit will be automatically reported to the AIA. Additional information regarding credit-reporting and continuing-education requirements can be found online at continuingeducation.bnpmedia.com.