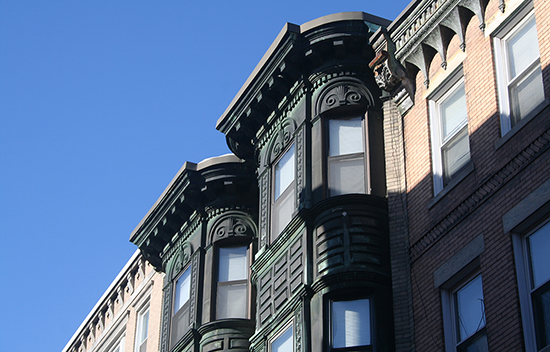 The #ilookup campaign resonates with me because I have a habit of walking into things on the sidewalk when I’m staring skyward. I was nearly struck by a car in London while checking out the Staple Inn. Traveling on foot and looking up are inherently connected for me – we travel too fast in cars or on public transit to effectively absorb the entirety of urban spaces. Even on my daily walk to and from work I find new details as I look up at familiar buildings. This experience can be bittersweet, though. 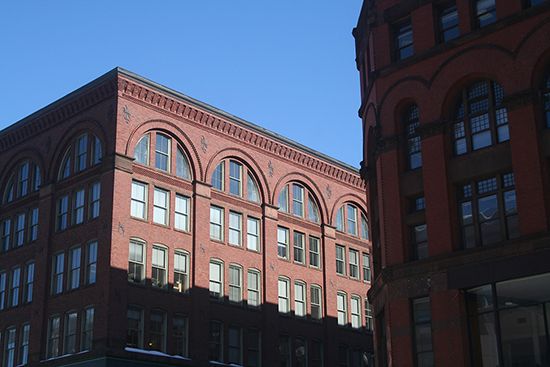 Some of Boston’s streets present a walker’s paradise of high quality and mixed-use architecture scaled to human beings, while the remainder is the opposite. 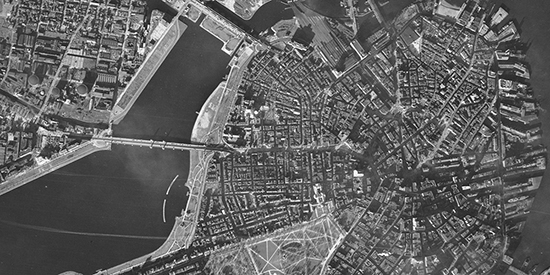 Charlestown, the North End, Beacon Hill, the Financial District, Fort Point, the Leather District, Chinatown, the Back Bay, the South End and even Brookline and Southie, are pedestrian utopias with their own flavors. But over the past 75 years, these spaces have been separated by car-centric planning. These neighborhoods are residual chunks of urban fabric from a time when the entire city was dense and walkable, but are now pedestrian islands in the car-centric ocean of infinite space. Twentieth century Boston fought the built environment it inherited. 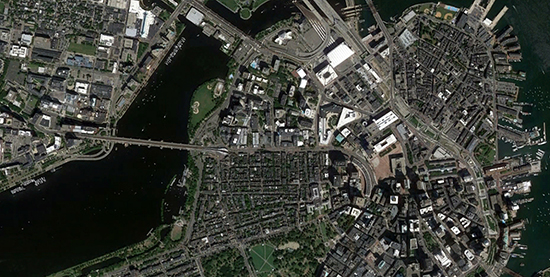 Boston, 2015. The North End, the Financial District and Beacon Hill are severed from each other.

The new Boston replaced many lively places with utilitarian no-places. This was partly a response to inner-city decay half a century ago, but we can do better now. It’s ironic that at the same time Americans were playing a heavy role in the preservation of historic European areas, like Venice and center city Florence, we were demolishing the West End and trying to redevelop the crooked streets of the Financial District into submission. 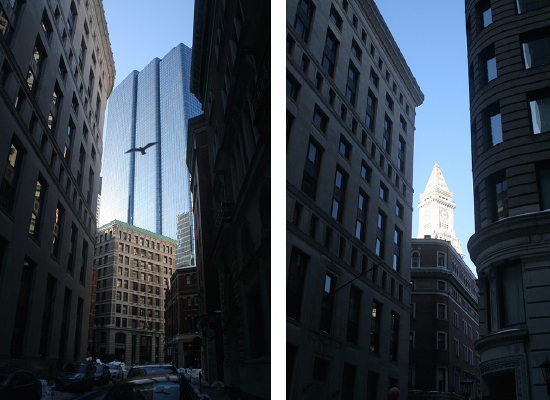 I wish we could have fewer generic corporate plazas downtown and embrace the chaotic maze and narrow canyons. Many of Boston’s high-rises built in the latter half of the 20th century could just as easily be in any other major American city. Boston is the post-medieval metropolis of America, with tighter, more winding streets than downtown New York. We shouldn’t fight what makes our city unique. Good design can prevent claustrophobia and instead provide a sense of human scale. 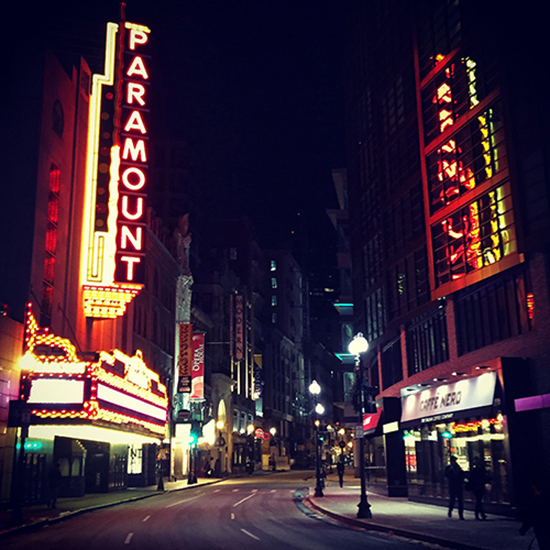 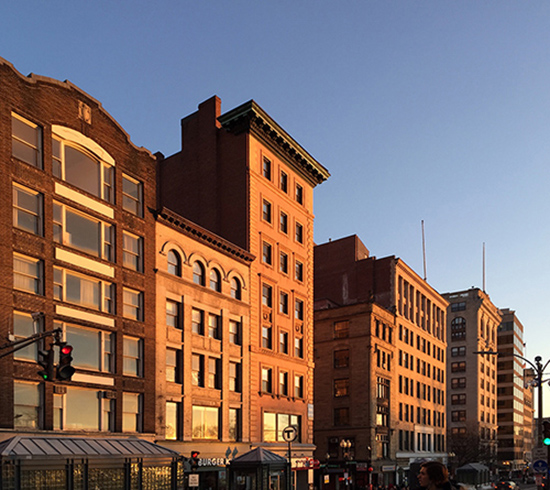 While there seems to be more momentum behind the mixed-use and preservationist movement, I’m uneasy about the scale of much of the new development. With the exception of infill projects, all of the new condo buildings are enormous compared to Boston’s historic residential fabric. The brownstones can be as narrow as 15 or 20 feet wide, compared to the 200’ long empty facades of the Lechmere development and other projects. 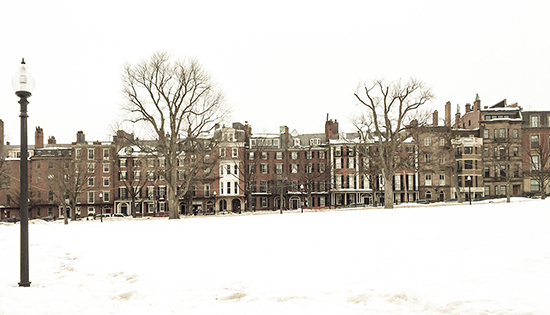 I’d like to see more mid-rise, fully-attached buildings zoned. Narrow streets and bike lanes are safer and greener than four lane highways squeezed downtown. This is the scale that creates community. This is the scale that encourages residents and visitors to engage with Boston’s architecture. If executed correctly, it can also provide the highest degree of accessibility by placing amenities close together and complying with ADA. For example, it would be great if we could replicate the nice scale of Fort Point, as well as equalize its superb materiality and detailing, in the surrounding newer neighborhoods. 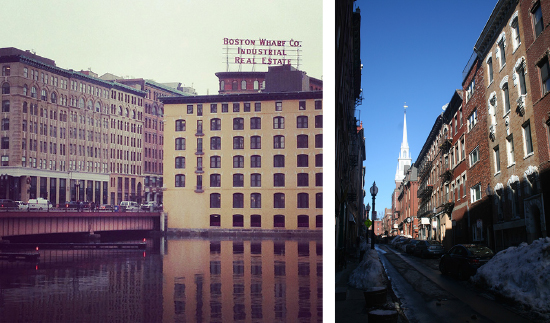 Boston would do well to concentrate both on real place making with progressive architecture that will age gracefully, and stitching together different neighborhoods with dense blocks and well-placed transit and streets on which pedestrians feel comfortable. As we shepherd the development of the city, we should be cautious about moving on a project-by-project, new construction basis, which might ignore any surrounding buildings or parking lots that could use some attention. A holistic approach is necessary. 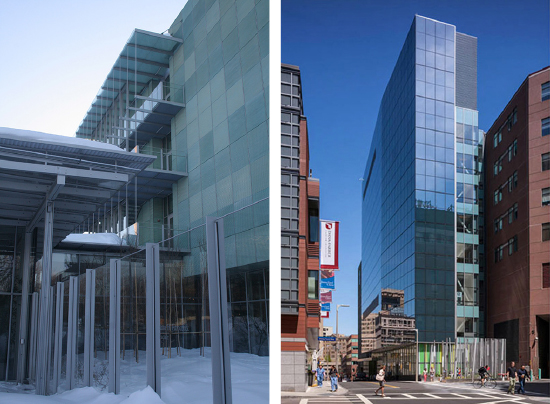 I’d like to conclude with a doctored photo of the billboard on the last tenement – the only building in the condemned old West End to dodge the bulldozers. It’s gone from a sliver of fabric to an object. Supposedly, the building was spared because of mob-connections, but I’d like to think it was left as a reminder that there is an alternative to the Junk Space that surrounds it. The quote is from Dr. Seuss’ The Lorax, a children’s book about the consequences of letting unmanaged industrial pragmatics ruin a place. I look at it as a challenge to treat urban fabric with care, so architecture can flourish and we can look up in great places. 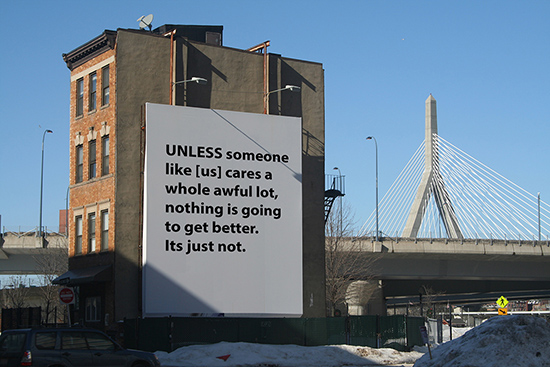