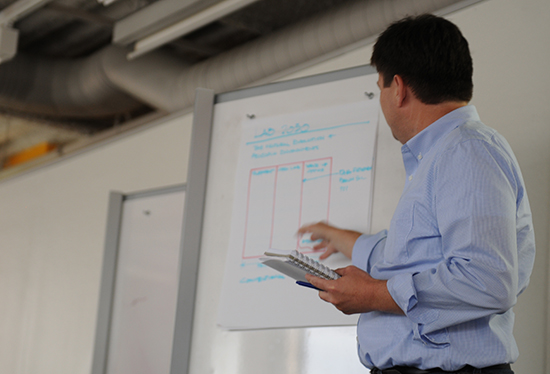 After we wrapped our first hackathon, we took some time to reflect. Every team mentioned that the timeline for the event (3 hours) initially seemed limitless, but then felt shorter than imagined, particularly as they distilled their ideas for presentation. Many teams expressed surprise at how difficult it is to present a cogent argument in 5-minutes or less. Overall, the participants universally enjoyed the opportunity to “flex their design muscles” in ways they don’t on a day-to-day basis. 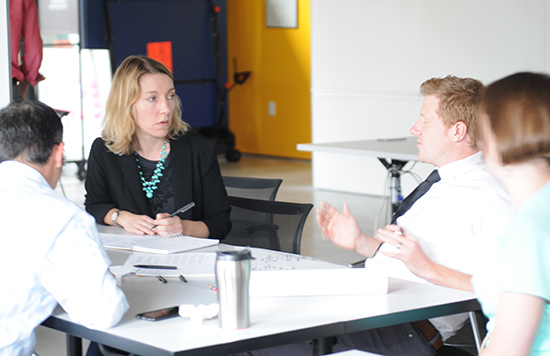 Our proposal developed a Laboratory Warehouse or Depot that would support the space fluctuations of typical research groups by removing typical floor mounted equipment and shelving, and suspend them from the structure above. This would aid in a free market approach allowing the growth or recession of a particular laboratory research groups to occur unencumbered by the constraints of a typical lab module. A system of auto retrieval would deliver the users the tools and equipment needed at the instance required and not take up valuable space the rest of the time. Work tables and seating could be easily arranged and reconfigured as the research evolves. The only permanent installations would be the core facilities, such as the vivarium and zebra fish colony, which would be located centrally in designated zones, while the general research would expand and contract around them. 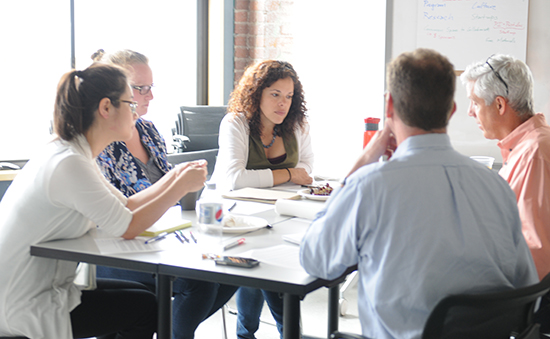 Our initial conversation began with examining the challenges students face with regards to opportunities to explore and develop their ideas into potential future businesses. This tied into the limited funding streams available to develop new life science products. The discussion quickly evolved, however, into a critique of the notion of atria and what constitutes the center, or heart of a research facility. We started to envision something for our own office – model shop without walls, in the midst of the studio, where many people would utilize it as a communal activity center. It would be a purpose driven space where many of us could experiment with work and personal pursuits, celebrating our collective interests. This future vision of the model shop began to inform our understanding of how atria should operate. We began to imagine the heart of a research building as something more than an atrium, something purposeful and exciting that would provide the basis for exploration and discovery. We could have both open and glass enclosed spaces float through the space with daylight filtering through from above and staircases meandering between the various events. We tried to make a business case for the support of this type of space. We proposed that PI’s would contribute a portion of their domains (by more efficient space assignment) and private companies would donate space/equipment with the hopes of having access to new ideas. PI’s selected to occupy the building would also be expected to support student endeavors as advisors, mentors or coaches. 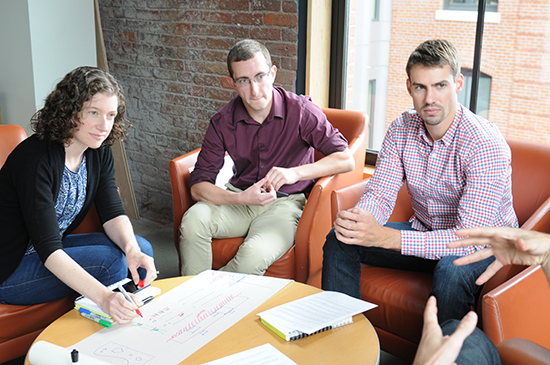 Our team spent a lot of time trying to get outside of our familiarity with research lab buildings and think about them from a different perspective. We were interested in the issue of research funding cycles and it impacts the researcher’s ability to focus on research. The prototypical model of research lab where the principal investigator has an office that is detached from the lab seems to have come from the idea that the PI is focused on grant writing and individual endeavors that are trying to keep the research funded and active rather than directly participating in the research within the lab.

Simultaneously we looked at the prevailing trends of the lab which have been stratified into distinct separate zones to reduce energy usage while trying to increase transparency a proliferation of glass walls have been added. These separations and systems have increased the complexity of the labs and created additional divisions which are antithetical to the goals of transparency and collaboration. The massive energy reductions and efficient equipment have given us the opportunity to eliminate the zoning and walls to bring research back to the model of the warehouse. Designing a simpler more utilitarian lab will break the cycle of arms races in research trying to lure large grant generating PIs with expensive new buildings and put the money back into the research to allow researchers to focus on their work and not the funding. 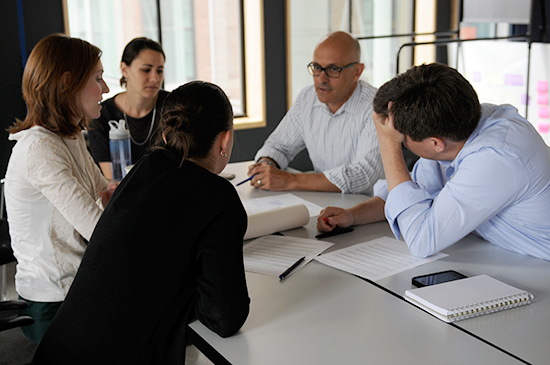 We proposed a transformative, future-proof lab building. Our team focused on the natural evolution of research environments by creating a prototype for the Lab of 2050. The core of our idea was to plan for how lab research will be executed in the future and to create collaborative lab spaces for human interaction that actually works.

The informal spaces designated for collaboration within lab designs are typically interspersed throughout the space after the most efficient and economical layout of the building has been conceived. We wondered why these spaces, intended for collaboration, actually perform as contemplative spaces places (where faculty or students go to make a phone call for example) rather than promoting interaction. We posited that the most successful collaboration spaces we’ve experienced have been shared, open-office work environments, like our studio, where a group of people work together on a day-to-day basis and engage in discourse spontaneously.

We combined our interest in collaborative space with emerging trends in life science and equipment-based research to develop a model for a new research environment. We see a pattern where research follows “hot topics” and while genetics may have dominated the life sciences ten years ago, this is rapidly being replaced brain research and neurosciences. We also see that the way the research is done is changing at a rapid pace.

We believe that the future of the lab is going to be an open office environment with off-site research equipment. Our pitch challenged the conventional triple module of current research lab design where the primary space consists of the support block and lab and the secondary space consists of the write-up offices with designated, but often unsuccessful interaction spaces. We suggested the Lab 2050 transformation would take place over time, resulting, perhaps in two buildings. One would be an on campus open office environment with some lab support and the second would be an off-site sample processing laboratory containing automated equipment running the experiments. The open office layout would allow students and principal investigators to analyze data produced at off site, pay-per-use equipment laboratories that might be developed speculatively in low-cost areas. The Lab 2050 would create a legacy building functioning well into the future, create a cost efficient model to support ICR and grant funding and give graduate students a collaborative environment that spans across research groups.