While I’ve experienced hackathons here at Payette with my colleagues, the Urban Innovation Festival presented a different kind of challenge in the scope and scale of the hackathon. Each team was asked to present an idea for activating the space under the I-93 overpass and that included a physical prototype (all by the end of the weekend – a pretty daunting task!) The main goal of the festival was to share the design process with the community who live near the site at the I-93 overpass in the surrounding neighborhoods. For me, exposing the design process meant our team had to consider a number of things in addition to coming up with a concept and prototype of our design solution.

Through our design process we needed to:

As a project manager, I’m always thinking about how to design the design process in a way that allows us to most efficiently reach our final goal of a deliverable project, while at the same time allowing enough room for creativity, innovation, and engagement from every member of the design team. Working through the design process for the Urban Innovation Festival was no different than guiding a project team through the design process we practice in our office. It was just on a much accelerated time scale in a unique working environment (you can’t get much more unique than designing under the I-93 overpass). 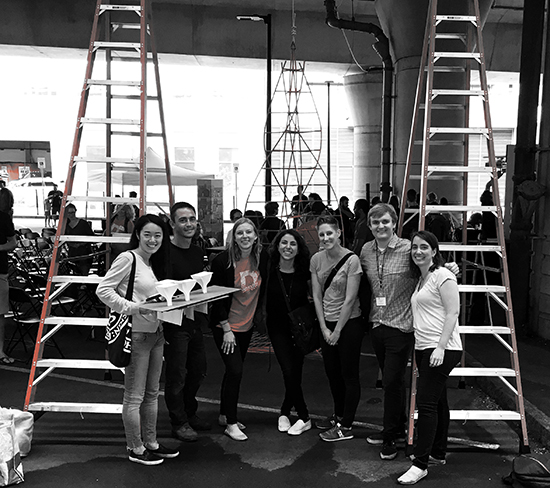 Determining each of our team member’s roles and strengths was pretty easy for our team. We work together at Payette every day. Even if we’re not on the same project team, we have a lot of events and activities in our office that highlight individual’s design strengths: in house presentations about specific topics like how to use new scripting tools or to share our side hobbies; design pin-ups and showings that share project work and process with the whole office, to name a few.

As a team, we periodically stepped back from the particular task each of us was doing to check in with the group and to assess that we were on track to the final goal for that day of the hackathon. Throughout the weekend, these check-ins allowed us to keep on task to the overall goal, but also allowed each person to comment on each other’s work and for individual team members to volunteer for a task or gap that we saw in our deliverables for the day.

In our first round of team brainstorming we pretty quickly found an idea that could serve as a generative concept for our team to expand on throughout the remainder of the hackathon. We started by sharing our observations of the physical and spatial conditions of the site. We investigated all the different people in the surrounding neighborhoods who might use the site and benefit from an idea that would make the space more welcoming and connect more people. One of our core design values at Payette is design for people. By focusing our brainstorming on ideas that supported our collective values as designers it was easy for everyone on the team to get behind a single concept. The idea of a swing was fun, interactive, appealing to people of diverse ages and needs, and of a scale that we could prototype in the time allotted.

Once we had a core idea, the next step was to involve everyone on the team in generating more ideas that would support the core concept and expand our idea to address the needs of the diverse users who could benefit from our design. The solution to expanding our idea while supporting our core concept was to take a systems approach to the rest of the design process – coming up with a family of design ideas that would address different site conditions and the needs of different user groups. It also gave each member of our design team the opportunity to contribute to the final design, giving each person ownership and a collective stake in our design idea.

By taking a system approach to the design challenge we could move forward quickly on the idea we planned to prototype, and adjust other parts of the design to incorporate feedback from community advisors, the judges and members of the public who stopped by to comment on our ideas. Noise was a big issue on the site that our swing did not address, so we developed a wall family that could incorporate artwork from school groups and local artists that would ultimately shelter pedestrians from vehicles and road noise. Our swing was a great tool for giving people a place to gather and attract them to the site, but we needed to respond to the diversity of uses that were possible on the site and feedback we received about restrictions on hanging anything from the highway structure above. We were inspired by a suggestion from our community advisor to invert the swing form to create a canopy   that could provide more sheltered space and a useful framework for artists and local vendors to use for each of their unique needs. 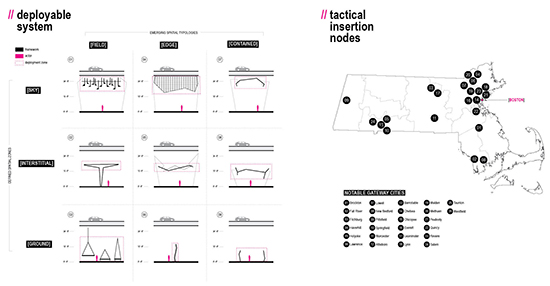 The important thing for all of our team members to keep in mind were our driving goals of connecting people and neighborhoods through the site. We also developed the form of each element using a common architectural language and set of materials so that they felt like a cohesive system not just an aggregation of many ideas.

Once we had a system that could incorporate many ideas from each of our team members, respond to feedback, and address multiple needs, we needed a clear message to share our idea with the judges. Open communication, a diversity of team members and leveraging each of our individual strengths also came into play when thinking about how to craft our message. Our team of designers for the hackathon not only included architects and landscape architects, but our Communications Editor was also a part of the team. This diversity of perspectives throughout the design process allowed us to think about how early design decisions might impact our ability to easily communicate our ideas later that day. The judges and public were not all architects or even designers, and different perspectives within our team helped us to consider different perspectives we might need to address for others as well.

Related:
Bringing a prototype to the Urban Innovation Festival