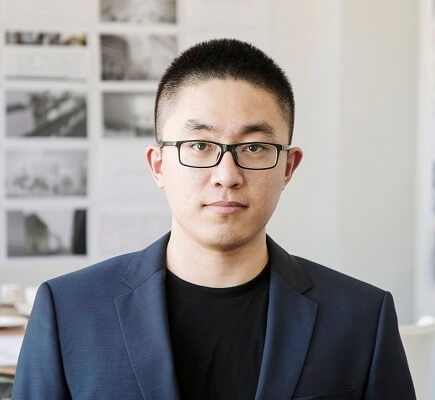 Over the course of the past year, the design team for a Cambridge Research Building has been constantly working on the study models and mockups for the sun shading elements to help to move the façade design forward. Physical modeling has been an important tool for the team to explore concepts, study the appropriate penetration and pattern effectively, visualize the geometry and understand the scale.

Paper Model
Due to the pandemic, the first prototype of the sunshade’s idea was cut at home from a piece of 9”x12” Bristol during the SD phase of the project. Made in a few short minutes, the 5’3” module was drawn with pencil, cut and pinched with fingers. While simple, it quickly conveyed the idea and spoke to the logic behind the design.

We utilized one of the façades as a base to study different configurations, compositions and transparency of the sunshading element. Once we were able to be in the office, we laser-cut the patterns and then pinched by hand to get the desired effect. 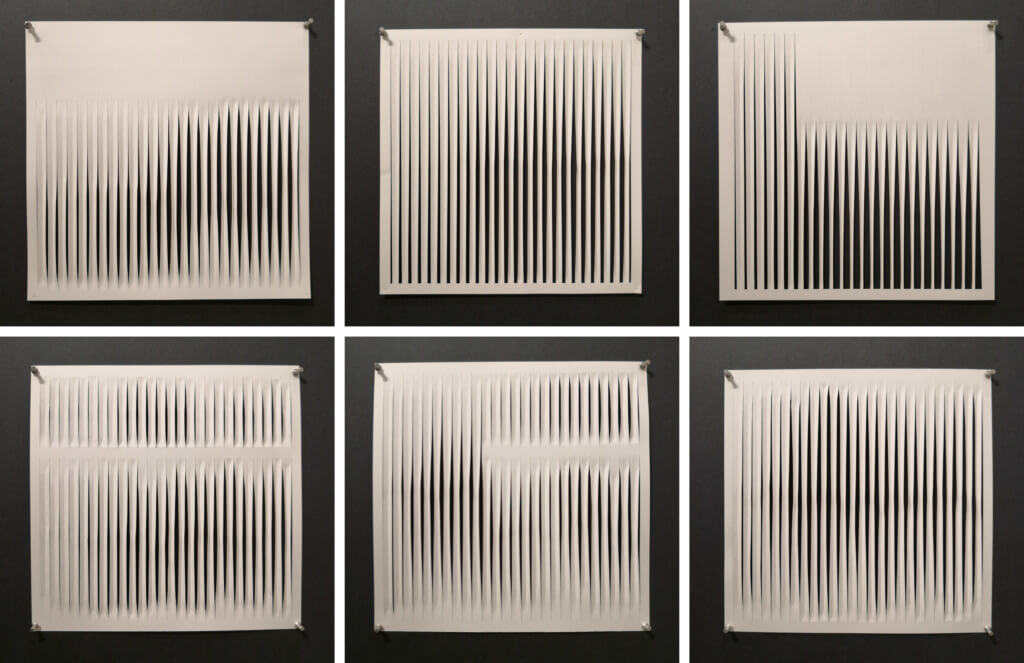 The design team studied the idea by applying the pattern to the entire unrolled elevation of the upper façade. Utilizing stickers to mark up the programs that require more light penetration and transparency, and sliding clips to quickly create more transparency, the team was able to see how the design would work. 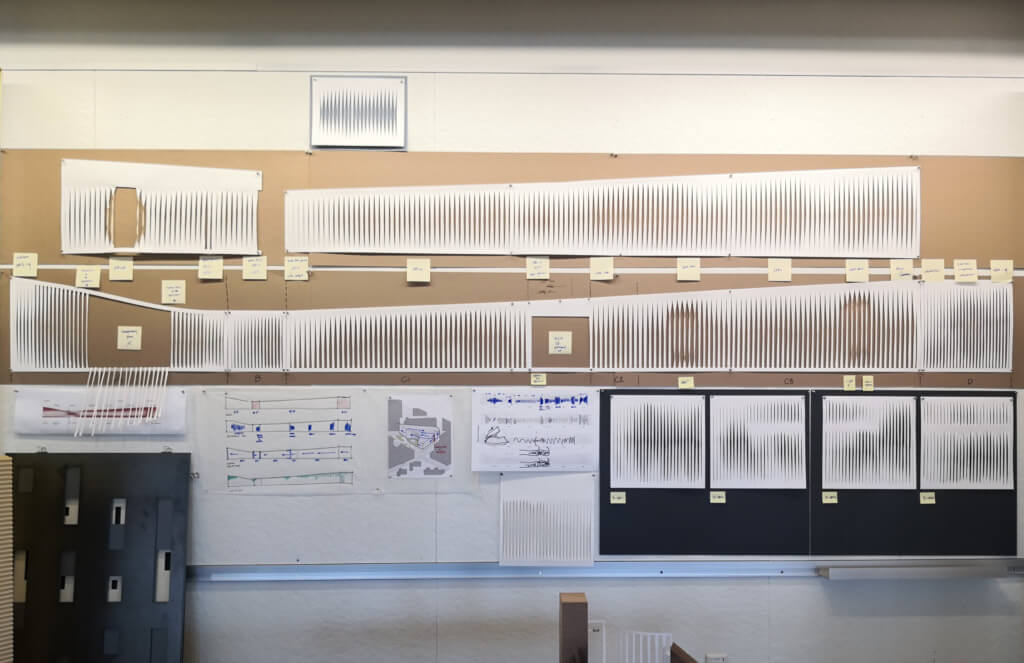 Foam Model
Payette’s in-house fabrication team milled a 1/8” scale building model, which the team wrapped and pinned with the paper model in order to review the relationship with the entire project mass. 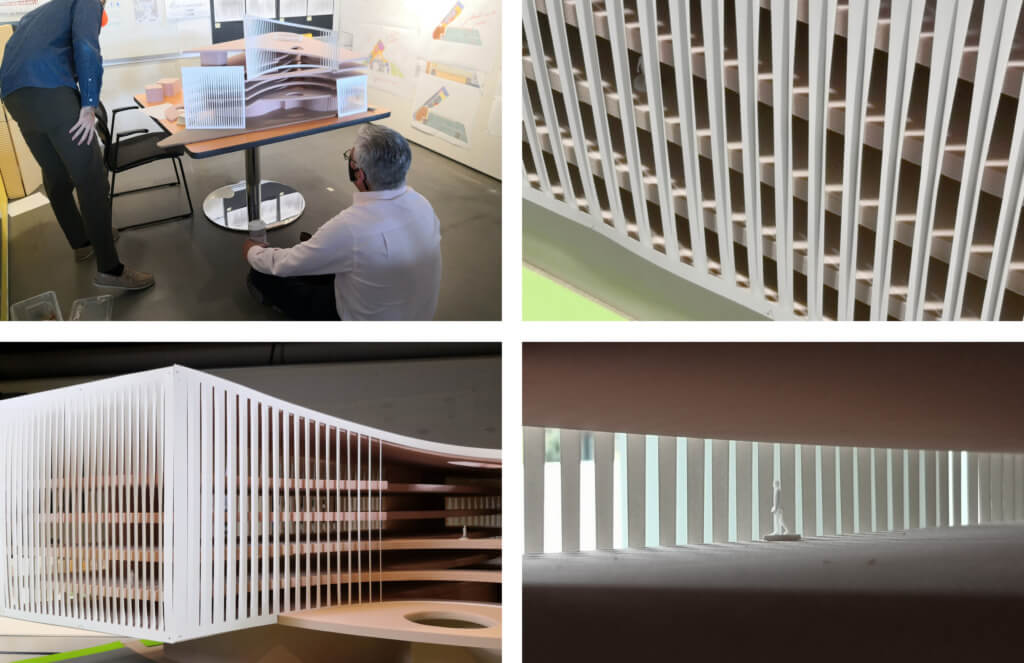 In the later SD phase, the design team worked closely with the fabrication team to deliver half-scale mockups of the fin. The larger-scale mockup was extremely helpful to review geometry, scale and perceptions of both the exterior and interior. Based on these mockups, the design team generated the idea of bringing more geometry to the frontal surface of the fins to shape a better quality of light, break up the scale of the fin and help the façade structure in a very logical way.

Single piece CNC milled foam models were used to study the nuances of the façade configuration. 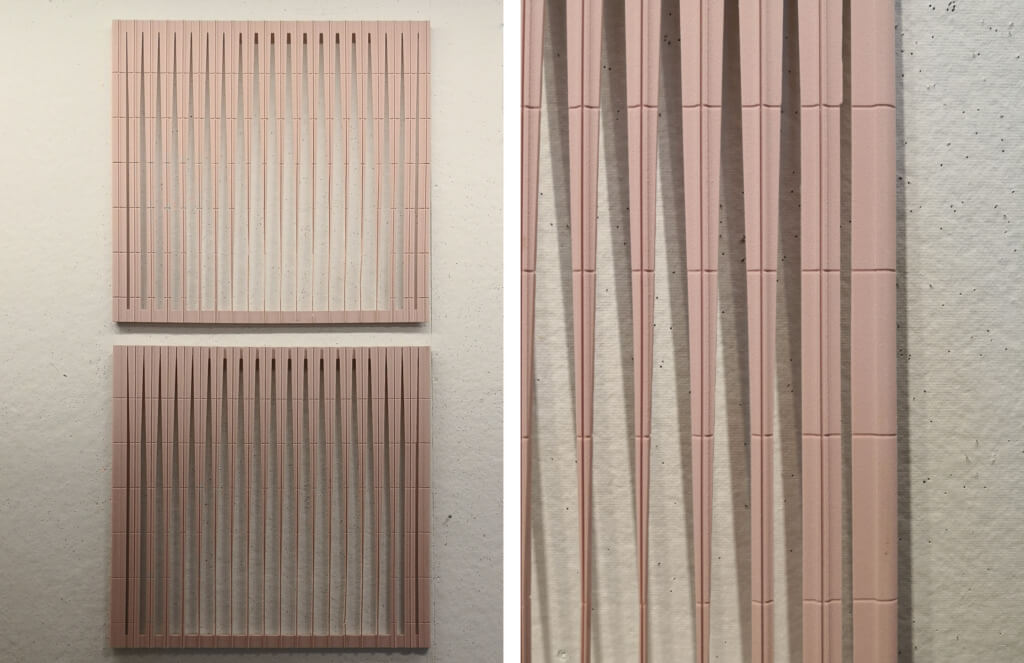 The first full-scale mockups for a few typical fin types and corner units were made in-house out of foam. The design team used these mockups to review the overall geometry, reveal details and spacing between the fins. 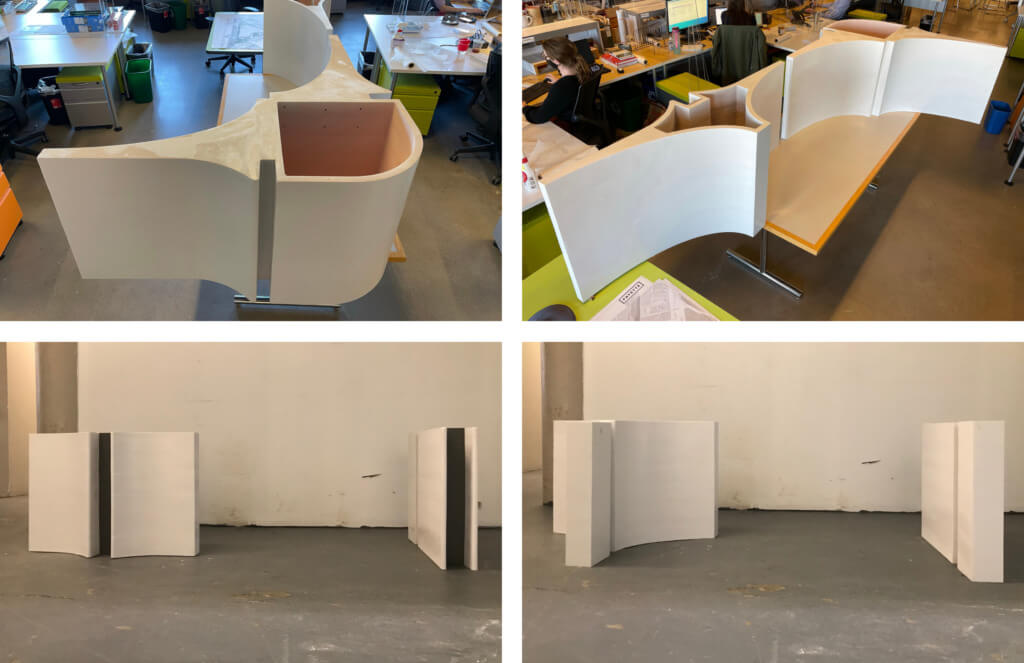 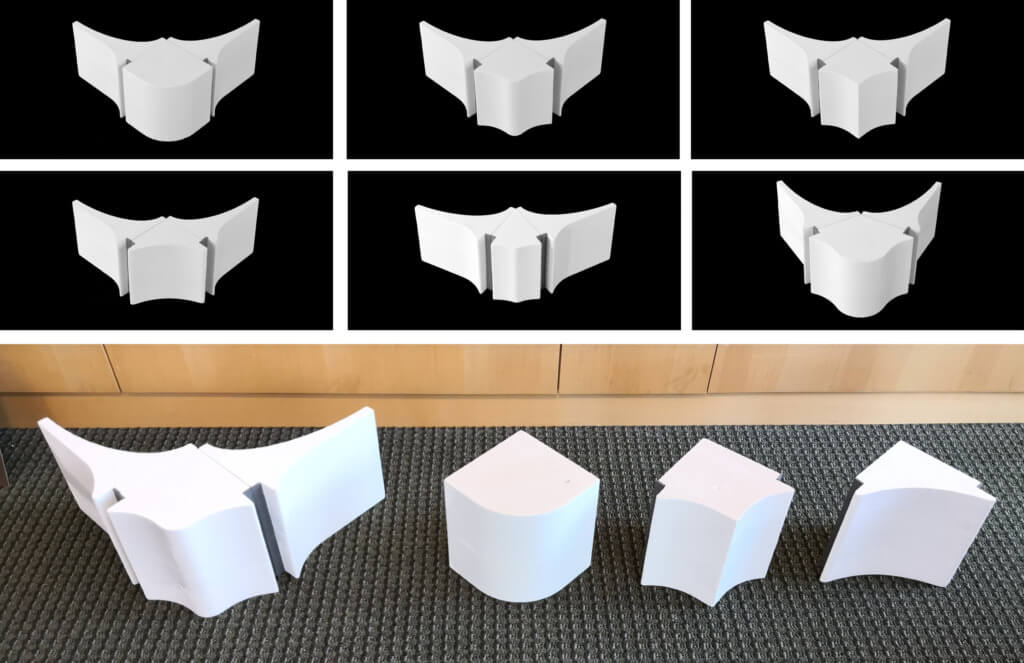 Another set of 1/3 scale mockups made of foam were used to review the fin geometry along with glass samples and the rest of the material palette outside in the direct sunlight. 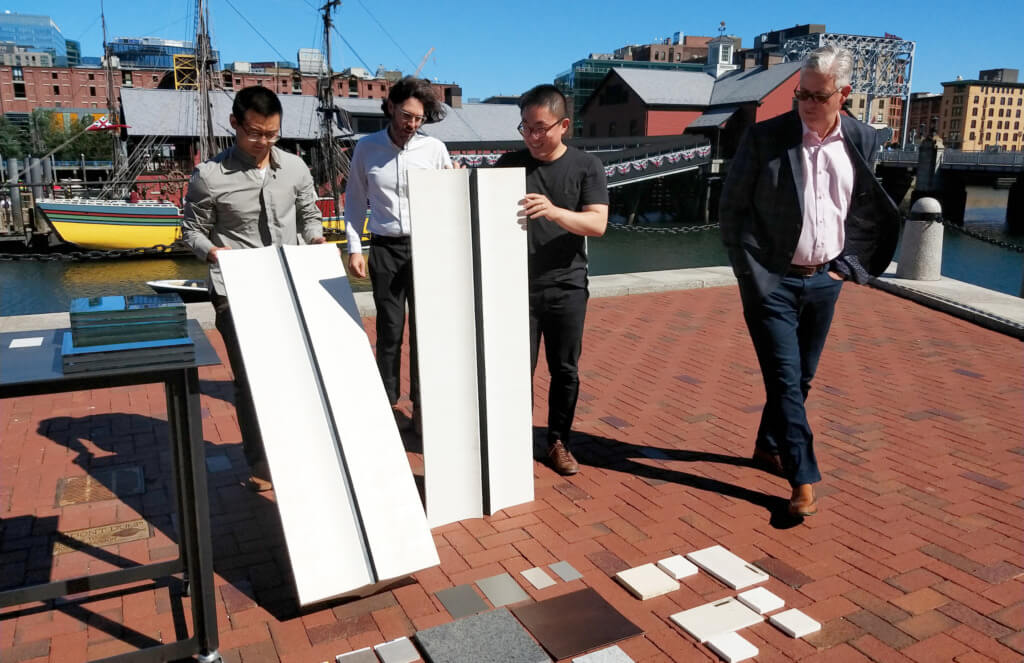 Design Assist Mockup
A few weeks ago, the design team,, client, façade consultant and contractor traveled to Windsor, Connecticut to review the first full-scale fin mock-up at the Design Assist contractor’s (Fabbrica) facility. The mockup was made of foam and painted to match the color of our control sample for the fin finish.

Janicki, the fin manufacturer was also there; they provided different colors and finishes of the Glass Fiber Reinforced Polymer (GFRP) panels for the design team to review. Seeing the full scale mockup hung 15 feet above the ground, everyone was amazed by the sculptural quality of the fin geometry, as well as the quality of light captured both from exterior and interior. The full-scale mockup was also helpful for the team to discuss further details including the reveal color, bottom cap, and the gasket in between the fins and glass face. 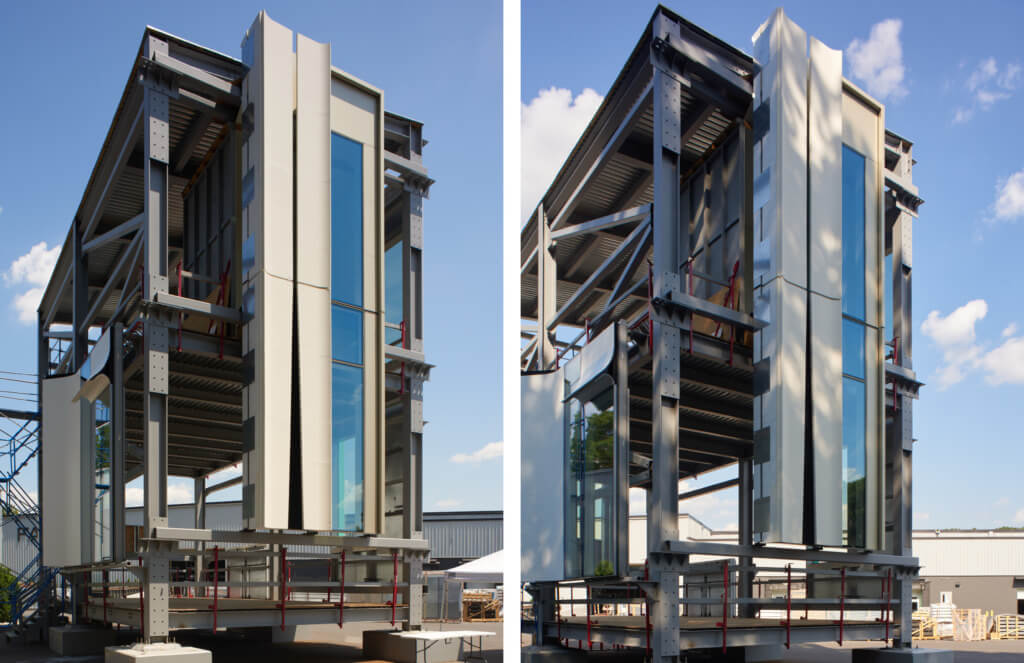 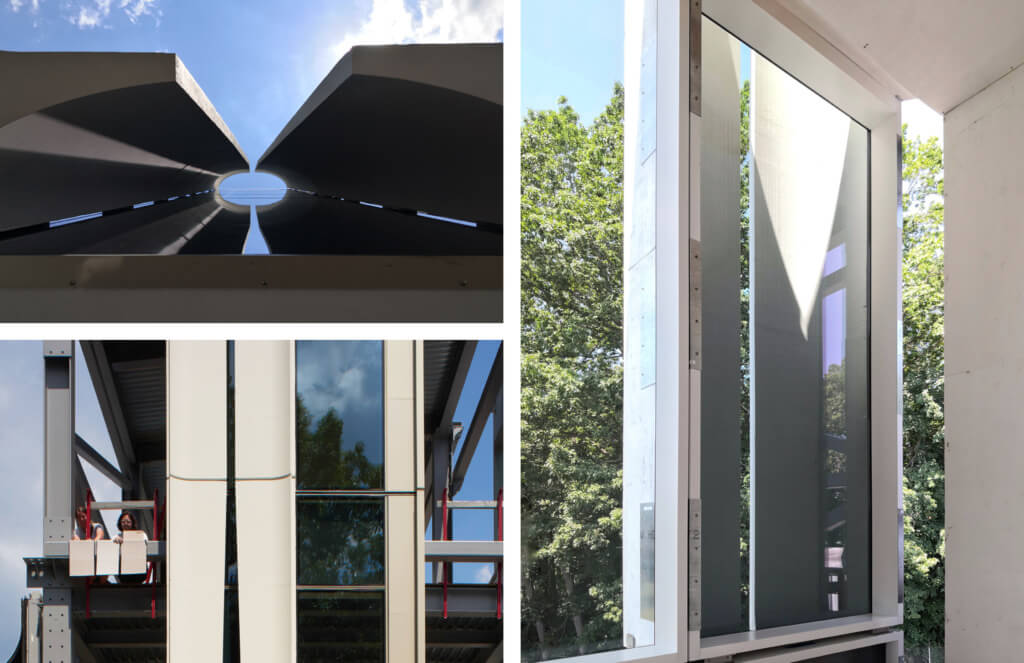