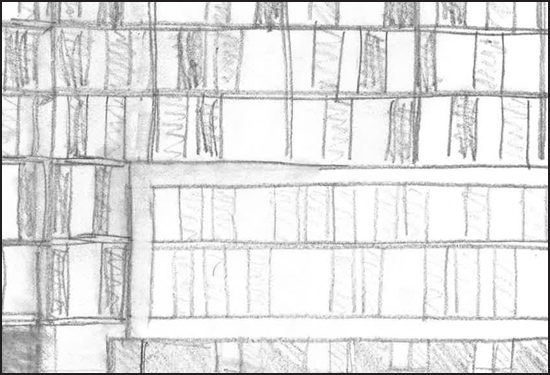 The notion of copied buildings has recently appeared with some frequency in architecture news, due to the publicity a copycat building (built by a competing developer) of Zaha Hadid’s Wangjing SOHO hotel received.. Articles regarding copyright and intellectual property rights entered the discussion, as well as several collections of photos pointing to a variety of buildings that bear some kind of resemblance to each other (web Urbanist and Architizer to site just a few). Hadid’s own response to the pirating of her work has been probably the most interesting to the idea of a building being blatantly copied. Instead of the indignation and outrage that expressed by the developer of the building, Hadid was reported to respond that the opportunities for innovation latent within cloning a building could “quite exciting.”

It seems overly academic and a bit naïve of Hadid to talk about innovation in this particular context. Photographs and renderings of the copycat building vs. Hadid’s original seem to make it clear that the developer of the second version was not looking to improve on her design, but rather to build a faster, cheaper version that would beat the construction of the original and profit the potential benefit of a Hadid-esque hotel. While innovation is certainly a concept embedded in the practice of architecture, it is interesting to reflect on the conditions in which Hadid’s comment might ring true and copying would, in fact, lead to innovation.

Within the practice and culture at Payette, innovation is one of our core values, and we continually strive to build a collective intelligence that builds on the experience of each project and push ourselves toward better architecture through innovation. Sometimes that may mean taking an idea from a previous project and applying it within a new context, or looking at an established detail and determining whether we can improve  it. Surely this type of utilization of prior knowledge and adjustment to new context is not the same as the wholesale cloning of a project on a new site. I think few within the architecture profession would argue with me that architects regularly rehash old ideas in new contexts and take inspiration from other built projects that may share some similarities to the design problems that they currently facing.

The key differences between what is encouraged within the architecture profession, and within our own office, and what occurred with the Wangjing SOHO, are both the scale and the context of critique and adjustment in which the copying of a project can become an innovation in another. Part of the appeal of architecture as a creative profession is that each project presents a unique challenge, with its own physical and culture context, a specific use and users, a unique client and a new opportunity to address all of these competing factors in what will ultimately become an architectural solution. It seems almost impossible to the architect that a new project would result in the same solution as one used before. This is not to say that a similar idea, detail or material might not be referenced or used again, but each of those elements and ideas that are revisited need to be examined critically before deciding whether they apply to the new context or how they can be adjusted (perhaps even innovated) to meet the project’s new requirements.

It may be from this type of context of critique and subsequent innovation that Hadid can take her philosophical stance on the copying of her design, and may be why there are relatively few instances of architects suing others whose building may bear an uncanny resemblance to one of their own designs. And while I do not think that this instance of copycat architecture bears any resemblance to the type of innovation the Hadid was lauding in her statement, I do think that it provides us as a profession an interesting opportunity to look at how the role of replication within the practice of design could lead to exciting innovations.

Maybe Zaha’s attitude is similar to one of a musician’s, like Duke Ellington who worked within a tradition of musical forms and constructs ( 12 bar, 16, 32, … blues). While the “form” of the compositions are the same , the variation, control, and interpretation offered to the musicians and composers allows for invention and innovation – thus broadening the art-form.

To me, none of these buildings are “copies” of another, although they may have a common DNA of a common Zeitgeist.

Also, given the media situation these, the tendency towards “imitation” or the appearance there of may not be surprising. I imagine even at Payette, one could do a similar sampling. I love the early projects especially and draw comparisons between it and Jose Luis Sert or Louis Kahns work (for obvious reasons) but would not suggest there is a copying, rather more a reflection of the spirit of the times…

Are there any truly new ideas? Is the concept of ownership relevant to architecture? Only inasmuch as 20th-century conceptions of intellectual property still apply. For architects, who should be committed to improving living and working conditions for building occupants, notions of ownership seems specious. Hadid’s feigned nonchalance was the only acceptable response that could come from someone who is out to promote her own work above all else.