The new Chelsea Soldiers’ Home Community Living Center will provide a long-term care facility for the Commonwealth’s veterans atop Powder Horn Hill in Chelsea Massachusetts. Designed to harness panoramic views of downtown Boston and the harbor, the transformative new facility will have 154 private rooms organized around shared community spaces and surrounded by generous courtyards. 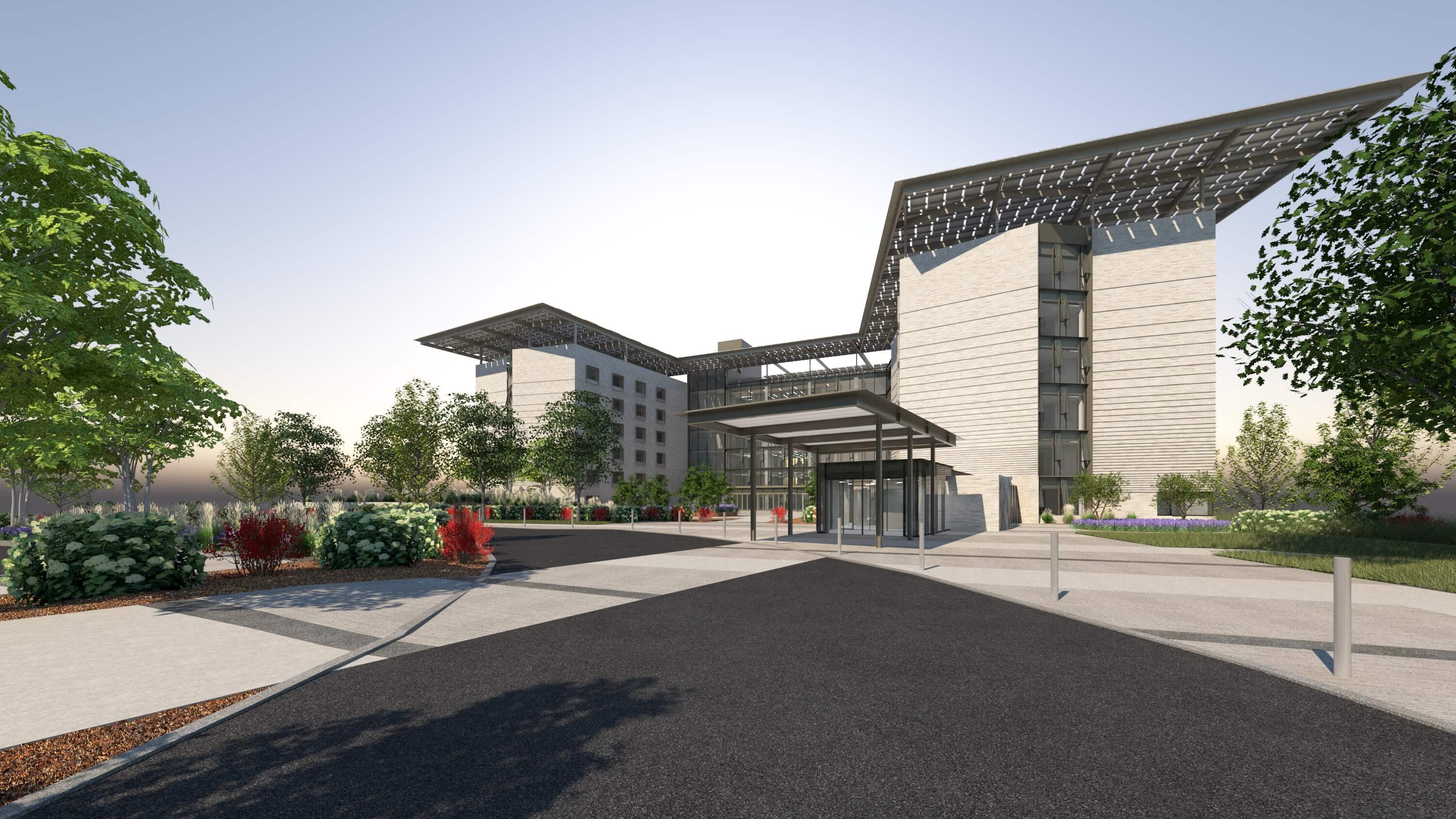 The architectural program reinvents elder care for veterans in response to several issues, including the existing 1949 facility being out-of-date with large 16-bed wards and unable to be renovated. Additionally, the United States Department of Veterans Affairs (VA) has significantly changed its model of care for Long-Term Living to the VA Small House Model. With the model guidelines in mind, our designed the campus with additional types of housing to meet veterans needs across the spectrum of age and abilities.

In 2005, the VA introduced the Community Living Center model, and was updated in January 2017 with the VA Small House Design standard. Impetus for this significant rewriting of regulations stemmed from a report from The Centers for Medicare and Medicaid HATCh (Holistic Approach to Transformational Change). The VA model aligns within the industry to the Greenhouse model employed by other long-term care facilities. The concept is that residents live in a “home-like” atmosphere with private rooms with the kitchen at the heart of each unit, as opposed to the older model of a hospital-like nursing homes. The goal is to empower residents, improving the quality of their life. Studies have shown that residents show impressive gains in physical and intellectual health when given more independence and a more normalized life style.

For our Chelsea Soldiers’ Home project, the home-like setting needed to accommodate a complex population. The residents have an average age of 85 and many have mobility issues, moderate clinical issues and some forms of dementia. While a home setting is desired, it is still important that the safety of the residents is preserved through the building design. The new Soldiers’ Home model seeks to create an attractive residence for these seniors while providing a supportive clinical environment.

Careful implementation of both the guideline specifics and the intent of the Small House movement has led to a new environment for the new Community Living Center. The facility moves away from the typical nursing home: long double loaded corridors, shared bedrooms and baths, unwanted sounds from alarms and paging, fluorescent lighting, unpleasant odors and shiny vinyl tile floors which negatively characterizes the institutional environment that often repels people. The new design respects the resident’s privacy, provides opportunities to personalize their space, creates a continuum of zones from very private to very public, reinvents the staff station and emphasizes the connection to nature and outside. 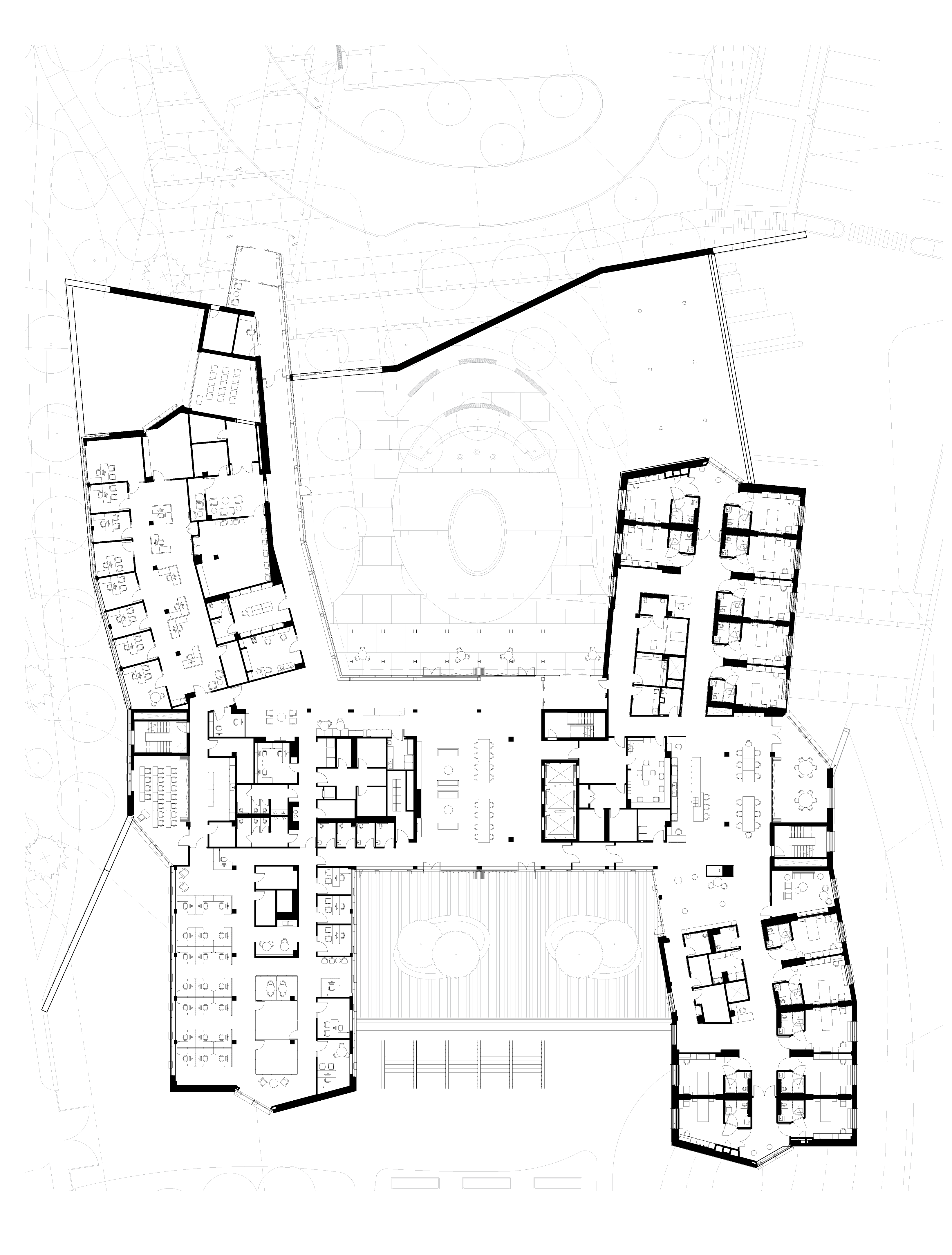 The Small House Design model organizes residents into 14 beds per house.  A typical floor has two houses that form a neighborhood. Each neighborhood has shared social space for larger gatherings. The nature of these social spaces is different floor-to-floor to offer the residents a greater choice of activities including art, music and recreation and give residents have an opportunity to socialize outside of their house.

The ground level programing will serve the entire veteran community.  There is a large community room that can open to outside space providing a large ceremonial space. Other public areas include a café, library, chapel and community store. This diversity of spaces meets the intent of the Small House Model by allowing the veterans to engage in a range of public activities. Special attention was placed in providing ceremonial spaces to support the veterans strong tie to military service. From the entry sequence to the two-story gathering space at the top of the building, Chelsea Soldiers’ Home is a place that Veterans and their families can be proud of as they are of their country and their service. 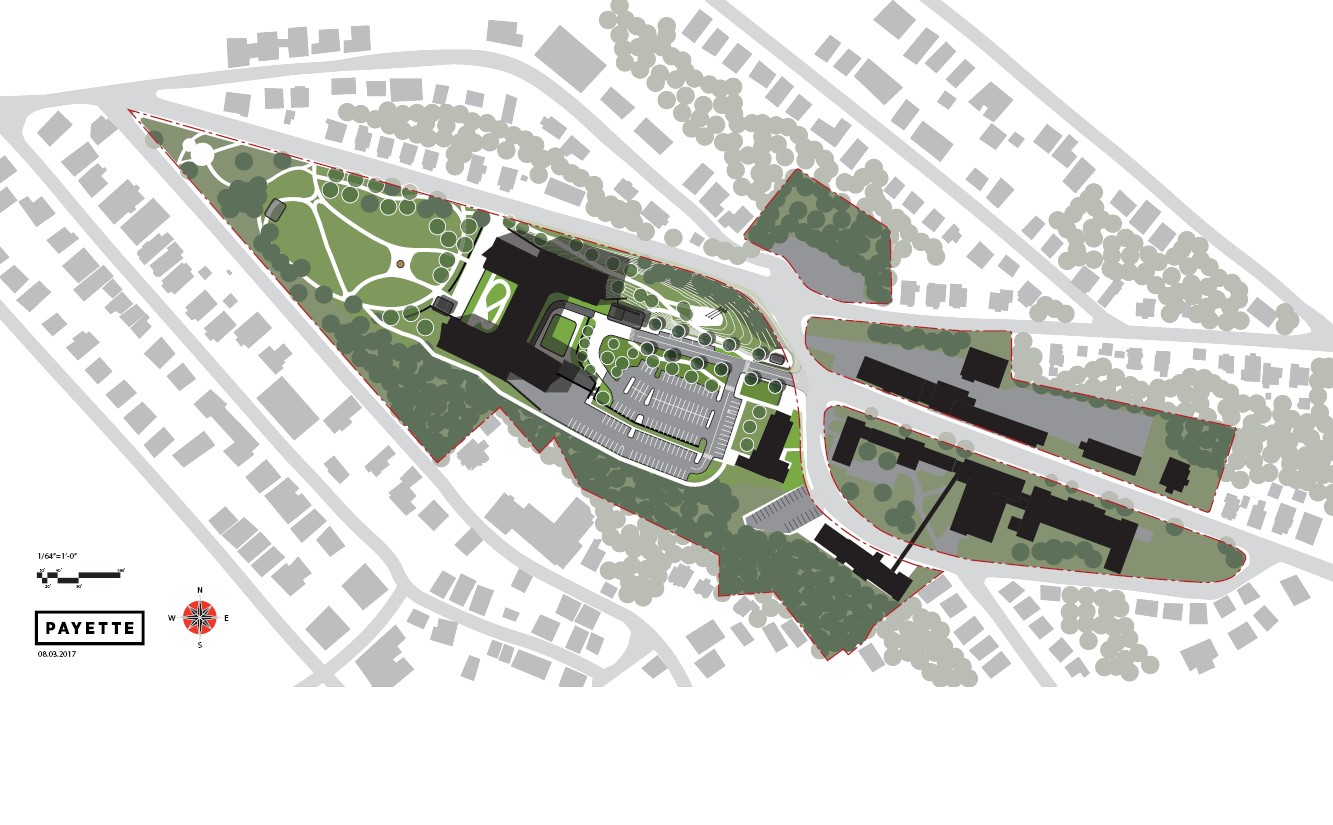 Can’t wait to see this built! Construction has started and we should have a new urban landmark on the horizon when it is completed.

Beautiful. I only wish my 87 year old veteran father was able to find a place like this. The typical human-warehouses we have now are pitiful. Can’t wait to see this finished.