The world is accumulating a growing collection of older, sometimes iconic, structures that fail to meet the demands of the 21st century. Renovations to sure structures routinely downgrade the use of the buildings in order to maintain the structures as historical artifacts. Nowhere is this trend more visible than at higher education institutions.

Throughout the past fifty years we have seen an increasing number of older buildings at the heart of our campuses converted from vital educational structures to administration and other support functions. As we enter an era of real environmental consciousness and responsibility, we need to ask: how many administration buildings will we need? At what point have we completely undermined our campuses’ vitality by depopulating the center and moving students out to the periphery?

Perhaps one of the best examples of this conflict can be seen at MIT’s signature domed structure, the Main Group Buildings. Conceived at the turn-of-the-last-century by William Welles Bosworth, the Main Group linked together one million square feet of academic space that was intended to serve all disciplines equally.

It could equally accommodate laboratories, music practice rooms, lecture halls and faculty offices. Now starting its second century on campus, this structure no longer seamlessly addresses the needs of all its occupants. The model of generic modular spaces strung together by long public corridors does not accommodate large connected teams, and the complexly intermingled programs stifle efforts to replace outdated building infrastructure. Payette worked with MIT to address this issue on many scales. Beginning with a Master Plan, initiatives were developed to revitalize the buildings both programmatically and technically. 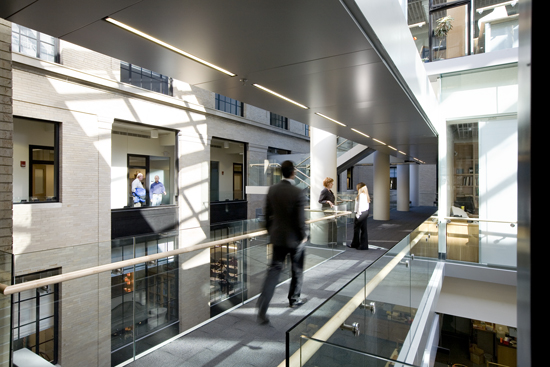 The key was that these initiatives, like Bosworth’s original design, focused on synergies between the technical and programmatic. The study established that it was possible to preserve not only the appearance of a historically significant structure, but also its core spirit, its genetics. Four years later, the Institute has now implemented the first phase of the Master Plan. The Physics, DMSE, Spectroscopy, and Infrastructure (PDSI) Project affects more than one quarter of the million square foot complex, and is the largest single renovation ever in the Main Group. PDSI works with three large academic departments, while also addressing infrastructure needs for a far broader area. The driving force behind the final design for PDSI was a need to consolidate Main Group Physics and DMSE spaces into large contiguous areas that would support collaborative work. The solution was found in the “infill” building concept. The core idea is that buildings that wrap around a courtyard can be connected through new construction and these connections could support both infrastructure and programmatic uses without affecting the outward appearance of the Main Group. The PDSI project brings an entirely new collaborative opportunity to the Main Group. Linking multiple buildings together from within, it creates functional suites so that departments and work groups can maintain a level of unity and definition behind the veil of the Main Group’s public corridor network. We believe that maintaining the spirit of a building and not just its appearance redefines the meaning of preservation; this belief is embodied in the PDSI project.