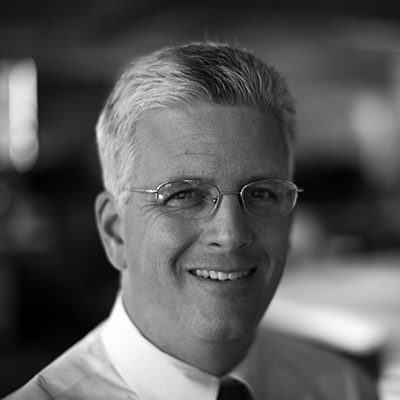 Color is an often unexplored formal compositional strategy in architecture. Many architects avoid it, or use it so sparingly that it is merely decorative and yet, using color is the simplest way to transform a space, and give it a sense of hierarchy and focus. 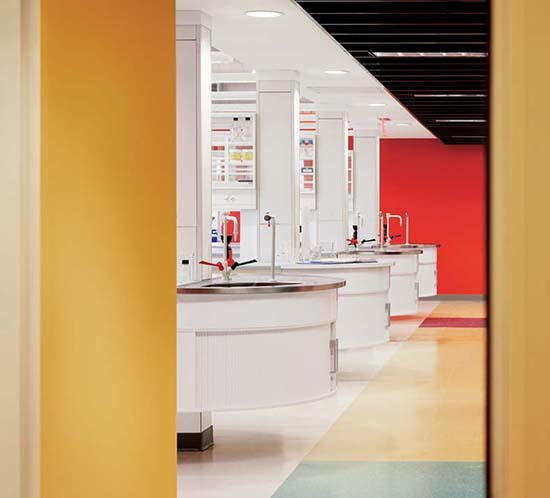 At the Schepens Eye Research Institute, color is used in a research lab to explore the depth of the visual field in laboratories for scientists exploring that very same concept in their research. In this case, the simple array of laboratories is transformed by movement and color that recedes and contrasts along with the visual field.

When I first finished my undergraduate studies in architecture, I thought that truly heroic architecture was black and white; the timeless balance of light and shadow. Color was a mere distraction in this secular view. Kahn, my idol at the time, believed that “Material is spent light,” further bringing a sense of substance and weight to the timelessness of architecture. Upon visiting LeCorbusier’s work in person for the first time after studying so very carefully the black and white images of his work for so long, I was shocked by the vibrant and lyrical sense that color played in his spatial compositions, bringing increased depth to the spatial field, but more importantly, demonstrating the presence of the human spirit. I found this realization to be similar to when one sees a painting for the first time, notice the brushwork, and you sense the presence of the artist in the room with you.

In many ways, it is often intimidating for architects use color as a comprehensive part of the spatial strategy, other than as an accent wall. Too easily, a composition can become overly complex … possibly out of control. Wasn’t architecture supposed to be a quiet spiritual thing … much like Kahn? As a student, I did not yet fully understand that by strategically using color, you could reinforce and excavate a building’s diagram, and increase the depth of the spatial field in a much more pronounced way than simply changing materials. Every corridor or room is a composition of hierarchy and planes awaiting exploration. The good news is that utilizing color is the least expensive design strategy that one can employ.

After graduate school, I was interested in formalism and geometry as form givers. Color was still not yet part of the equation for me, but this interest in formalism was very useful in providing some tools for how I might engage the use of color. I was fortunate that my mentor, John Wilson, a principal emeritus at Payette, initiated me in the use of color. John’s inspiration was derived from Aldo van Eyck and Corbu. For John, the choice of every color was a literal metaphor for the material properties of the building or a site’s latent color palette. John also believed that color should reinforce the literal diagram of the plan and program. Since John designed health care facilities … the programmatic richness of the typology provided a moveable feast of opportunity. Doing these initial color studies with John was one of my favorite parts of each project … we meticulously re-explored and re-interpreted the diagram as a canvas, and then painted, with a freedom that one seldom has as an architect. I learned a lot from watching John use color in his buildings, providing me the courage and tools to give it a try.

As my career progressed, my use of color varied from John’s; the palette is still derived from the latent colors of the site, but they are also about contrast. I often use color that is in contrast to the palette of the building. It is not shocking, but it adds a layer to the composition, rather than just reinforces it. In Corbu’s work, color adds a layer of complexity, in Meier’s work it is absent and the spatial and compositional complexity is highly contained and predictable. As a group of photographs Corbu’s buildings present their sculptural quality and that of an inanimate object frozen in time. However, walking through the Ville Savoye is an amazing three dimensional experience; but the bold accents of color at critical thresholds in the project give it life and allow one to see both the painter and the architect at work. Color gives a building more presence, a spirit and a will. It can also ruin it, but unlike many things in architecture, fortunately, failure is fixable. It is just paint.

Much like learning to draw a curve, one has to work a lot with color to become more comfortable using it. One has to learn to paint. Successful strategies can be highly formalistic but can also be highly subjective and personal. We often develop the full palette of colors first and then start to figure out how to employ them according to the formal spatial principals of the building as a second step. This is also often the best way to bring a client into the process, by defining the palette, range and then exploring the building. At the end of each project, I am continuously surprised by the role that color can play in the success of a project. There is always a room or two where something gets refined or changed, but for the most part the experience is a depth of spatial complexity that is unexpected and sheer delight. 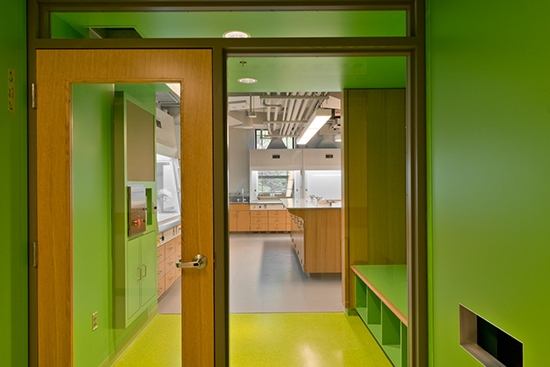 At the Boston College Merkert Chemistry Teaching Labs, color boldly defines the entrance portals from the corridor to the labs, a radiant presence both inside the Teaching Lab and along the Corridor. 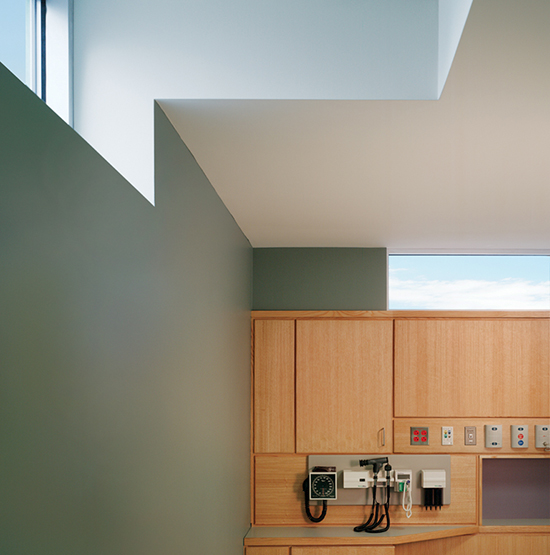 At the VA Providence Emergency Department headwall, color is used to reinforce the volumetric planes defining the headwall and the windows bringing natural light into the clinical spaces. 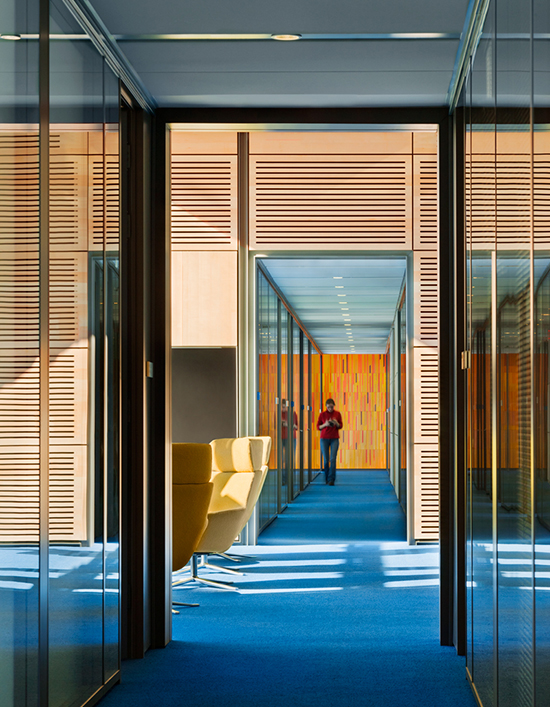 At Princeton University, a radiant blue carpet and flooring becomes the visual anchor in a spatial composition defined by a rich materiality and natural light.

A few notes on methodology