On June 23, about 200 colleagues, clients, friends and family members gathered at the Harvard Club of Boston’s Downtown Club to celebrate Tom Payette’s remarkable career in architecture, which started in 1960 when he was graduated from the Harvard GSD with a Master in Architecture. Attendees enjoyed drinks, hors d’oeuvres and amazing views of Boston from the 38th floor of One Federal Street. Several of Tom’s colleagues and clients were invited to say a few words about him and his career:

Near the end of the speaker program, Firoz Rasul presented Tom with a sculpture based on the iconic entry portals at the Aga Khan University, one of Tom’s seminal projects. Made of the same pink marble from northern Pakistan used in the actual construction, this keepsake came in a custom teak case.

“I woke early the morning after the Blizzard of ‘78 to go out and shovel, just like everyone else. But I was interrupted by a phone call from Tom. ‘Sue, can you come down to the office to send a telex?’ In disbelief, I said, ‘Tom, you’re at the office?’ Of course he was. He was always at the office. ‘You want me to send a telex? There’s been a huge snow storm; the city is paralyzed,’ I stammered. To which Tom replied, ‘It’s not snowing in Karachi.’” — Sue Morison Daylor

“There is much talk today about “authenticity” and whether a foreign architect can provide a legitimate sense of place. The element of authenticity that matters most is not nationality but a humane vision —those ineluctable feelings for scale, texture, ambience and access that gives a person who occupies a space a sense of peace and rightness. That, Tom, is what you and your colleagues brought to and left in Karachi. It’s a wonderful achievement.” — Bob Edwards

“Tom, you taught me much about the intersection of design and the human experience. You taught me about leadership, teamwork, perseverance, perception and pragmatism. Importantly, you taught me how to see.” — Sue Morison Daylor

“You can’t succeed Tom … you can only follow in his footsteps, down a path so clearly worn through the floor of the forest.” — Jim Collins

“Tom’s focus on people, both in his design philosophy and also the importance he places in connecting with people, underscores what I believe is the heart of Tom’s career as an architect, and that is his generosity: his generosity in providing opportunities to young professionals, like me; his generosity in sharing the credit and taking pleasure in the successes of others; and his generosity in building a successful practice and then being willing to take a step back so that the firm can grow and take on a life of its own.” — Mark Careaga

“In this regard, Tom, what you achieved in the spaces of the Aga Khan University touches the heart as well as the mind. When patients come to the medical center, they tend to be accompanied by eight or ten family members. In dense, dangerous Karachi, a sight that always brought tears to my eyes on a warm summer evening were its courtyards and open arcades with their quiet watercourses — filled with families and small children. However dire their medical worries, these common citizens of Karachi were finding AKU to be a place of solace, beauty and safety, taking respite on its quiet, green outdoor lawns, behind the protective wall that deadens the roar and tumult of Karachi.” — Bob Edwards 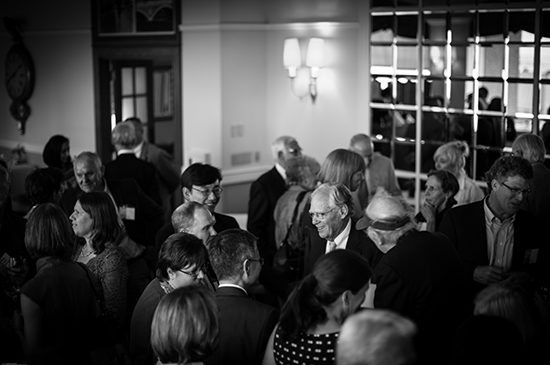 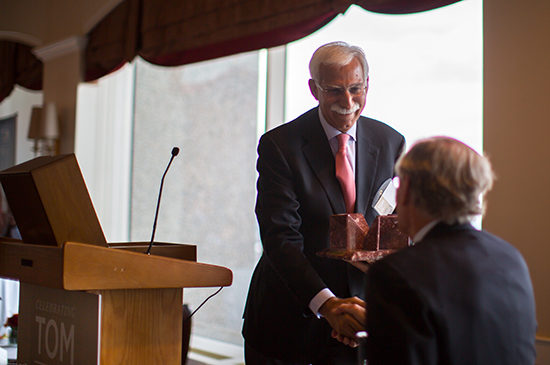 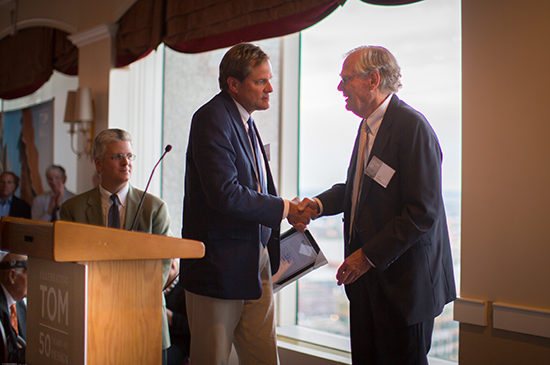 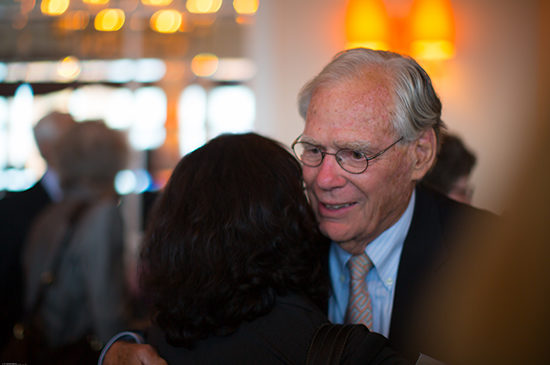