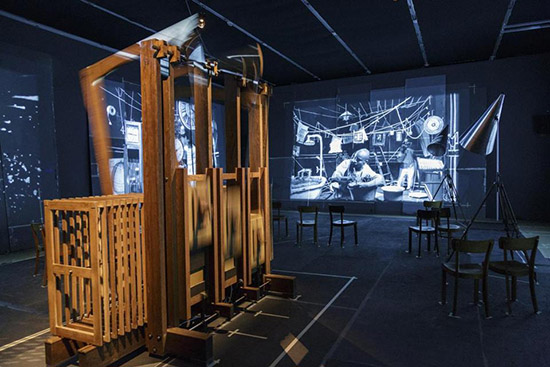 Photo credit: The Boston Globe, Play time for Kentridge at the ICA

The fluidity and measure of time is explored in William Kentridge’s “The Refusal of Time” on view now at Boston’s Institute of Contemporary Art. Utilizing the techniques and mediums that Kentridge has become renown for: drawings, animated collages, film, silhouettes, mechanized sculptures and sound, he creates an incredibly immersive, layered piece of art that both investigates the changing historical definitions of universal time and our individual perceptions of it. Beautifully balanced between rigorous investigation and artistic expression, the work creates a multifaceted experience that echoes our varied understandings of time.

One enters the installation from the rear corner of one of the longer sides of a rectangular room. The half hour of projection takes place on the two side walls and the front wall, yet the primacy of the frontal view is hindered by a large wooden mechanized “breathing machine” in the center of the room, whose movement marks the passage of time throughout. Utilizing the aesthetic of a mock up, tape on the floor marks where objects are to be placed: the breathing machine, the scattered chairs, the dispersed speakers in the Kentridge’s iconic cone shapes. The “screens” themselves are a built up with a series of overlapping boards rather than individual entities or a single blank wall. The number of projections changes throughout the work from the nine metronomes whose varying rhythms mark the start of the piece to the single linear projection which moves around the room to close the piece. There is no correct place from which to view the work, in fact it is best to move around during the piece, reinforcing the lack of a singularity of experience.

The work, created in collaboration with Peter Galison, Philip Miller and Catherine Meyburgh, investigates our conceptions of time through history while simultaneously positing time as a mechanism of power and imperialism and considering the variations of an individual’s time and memory. The oscillations of the projections reinforce these various scales of investigations and begin to overlap and intertwine them. Multiple images are presented in relation to one another, but then diverge. A dominant narrative is projected from the center screen and then expands to the side screens. Sometimes it remains a single narrative, sometimes it pulls apart into multiple strands. As one’s eye moves from one projection to another, there is a feeling that a beat may have been missed, a sensation that is heightened when the projections begin to diverge and repeat. While always composed and structured, even in moments of cacophony, the resulting slippages and overlapping of time created heighten the ideas that Kentridge is exploring.

The sounds of the film do the same as the visual images, being at times asynchronous, at times parts creating a whole, at times a dominant narrative. Particularly striking is a moment towards the end of the piece when the projections are in synch and one’s impression is that there is a dominant narrative with secondary voices chiming in. Moving around the room, however, and entering the cone of sound from one of the scattered speakers, the secondary voice dominates to the exclusion of all other sounds. Perspective is not only determined by which projection one views, but also by which sound one hears. Each person creates their own individual soundtrack depending upon where they are positioned, whether they are stationary or moving.

For me, one of the most poetic moments of the work came when viewing it for a second time in a relatively empty room during the week around lunchtime. Throughout the work, the shadows of the moving breathing machine and conic speakers project themselves onto the screens. But at the moments where the projections are dimmer and the room darkened, everything in the room, including the audience, is reduced to a silhouette and creates the phenomenon of being part of Kentridge’s drawings. At these moments, the room collapsed into the work and the individuals into the trajectory of “The Refusal of Time,” making apparent that this work investigating time is both an intellectual exercise and a personal experience.

Showings of “The Refusal of Time” begin at a quarter to and a quarter past the hour. It will be on view in ICA’s West Gallery until May 4.

This makes me want to go and feel it – as you beautifully communicated the experience.
The sensory impact of sound is usually understated except when brought to our attention – and ‘sounds’ as if it is in an elegant combination.
Thanks Christina.