I got involved in the Payette / MGHfC animation project – now officially titled: “You Are Here: Wendy’s Welcome to the ED,” somewhat early in the creative process. At that time, the original core team had completed a lot of pre-production regarding the look of Wendy’s character as well as some basic animation tests and the script was nearly finalized. What had not been decided upon yet was the music. It was very clear that one of the necessary ingredients to make the final video truly special would be an original musical score, so I volunteered to produce it. I saw this as a great opportunity to be involved in such a meaningful and impactful endeavor – as well as a way to test my own boundaries as a musician and composer. For the task at hand, I would have to stray from my usual genres (Hard Rock/Alternative/Blues) in order to evoke the right mood. 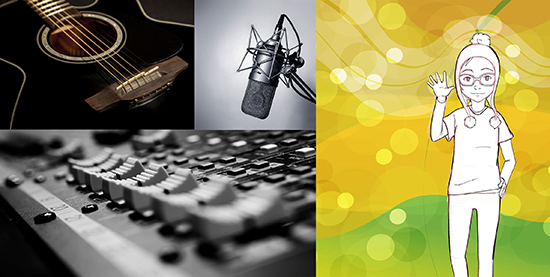 The basis of the musical theme started with a simple piano melody that stuck as I was playing around, searching for the right sound. It had just the right feeling to it, but the instrumentation wasn’t quite the right fit. It sounded too “formal” as a piano piece, and needed a more childlike quality to it. I found some audio samples of an actual wind-up music box, and began playing the melody on my keyboard – triggering those samples, and the result was exactly what I was looking for. From that simple motif, the entire score began to take shape as I added acoustic guitar arrangements, additional piano parts and some textural synths and strings to pull it all together sonically. As the animation team progressed with their work, they created a master video template file, which I used as a visual guide for developing my arrangement and properly syncing the musical score. 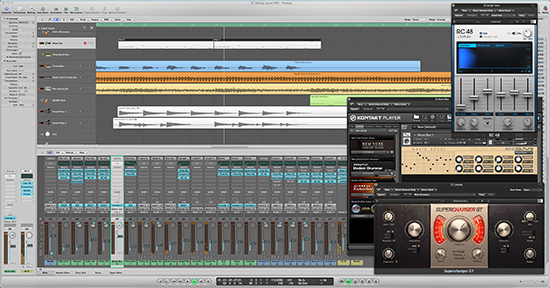 In the studio, my DAW (Digital Audio Workstation) of choice is Logic Pro, which is basically a desktop computer version of a traditional analog studio recording system. The software emulates a multitrack recording interface and virtual mixing console, complete with a full set of professional sound processing plug-ins. The various tracks in this composition are a combination of “virtual” synthesized sounds played through a MIDI keyboard, as well as acoustically recorded instruments. The acoustic guitar, bass and some percussion parts were recorded using three condenser microphones strategically placed to capture a full sound. Once the tracks are recorded, they appear in the “arrange window” as an audio object that can be assigned a color. The DAW interface allows for really quick, hands-on editing which proved to be very useful as I was constantly moving parts around and shaping the composition. In the end, I suppose one might say that I was the producer, arranger, recording engineer, mixer and sole musical performer on the soundtrack – but I always relied on the project team for critique of how the music was taking shape.

Because this animated short is intended to comfort children as they enter the hospital, it was very important that the music not convey a feeling of sadness. My ultimate goal was to create a soothing mood that could be at times heart-warming, but ultimately building in a feeling of hopefulness. Because I was able to spend time with Wendy during the voiceover narration recording sessions, I feel that a little bit of her personality also influenced the music that I developed. A lot of inspiration came from Wendy’s story, so the music is truly reflective of that.

Check out a radio cut of the score here:

I couldn’t be more proud to have been involved in the creation of this cartoon. The entire team stepped up and committed to deliver a product – the likes of which no individual collaborator had ever done before. The end result of everyone’s efforts soars triumphantly.