A year ago, Kevin Sullivan gave a lecture at Virginia Tech, his undergraduate alma mater. The opportunity to communicate Payette’s culture and design philosophy spurred further thinking about how to codify our current and past projects; and shape our future evolution.

One year later, we returned to the College of Architecture and Urban Studies for a week long exhibit of our work. Over twenty projects were showcased, representing the breadth of recently completed work, ongoing pursuits and enduring curiosities. Given our intensive use of models and prototypes to develop design ideas, realizing the exhibition was a logistical feat and involved several months of planning by two incredible teams in Boston and Blacksburg, with twenty Virginia Tech students helping with exhibition assembly and disassembly. 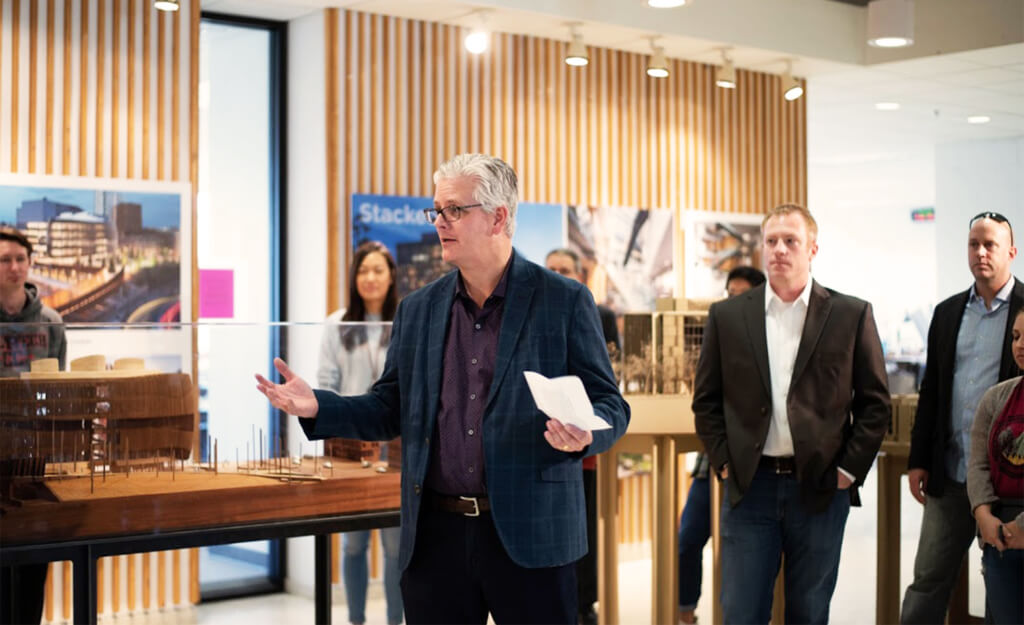 On a Sunday evening, Kevin formally opened the exhibit to a crowd of students, faculty, staff and members of the architecture community who were in town for the college’s career fair. Kevin spoke of Payette’s values, evolution and ambitions. He shared his enthusiasm for the firm’s first exhibition located in the lobby of a building he once roamed as an undergraduate student.

The 800 miles of travel to bring the models and boards to Virginia Tech meant Payette staff remained in Blacksburg for the duration of the exhibit. Serendipitously, this presented us with the opportunity to be fully immersed in the school, engaging with students and faculty on a daily basis. From the moment the truckload of models and presentation boards arrived, students enthusiastically dove in to help stage the exhibit, and this energy and engagement flourished throughout the week. The gallery hosted faculty presentations and student drawing sessions; our team held workshops and participated in student desk crits and pin ups.

Parke MacDowell, Payette’s Fabrication Manager, gave a lecture titled Performing Architecture in which he elaborated upon Payette’s culture, philosophy and belief in Performalism – the idea that architecture must perform with respect to building science, program needs and human experience. The lecture also spoke to the role of the designer in the performance of architecture; that the role of the architect is not to construct buildings, but rather to communicate design ideas. He cited recent projects where fabrication played a key role in this performance and how Payette uses the hands-on exploration of form, texture and material to both interrogate design problems and communicate solutions. This clarity of communication is all the more important due to the intricacy and size of our core project types. 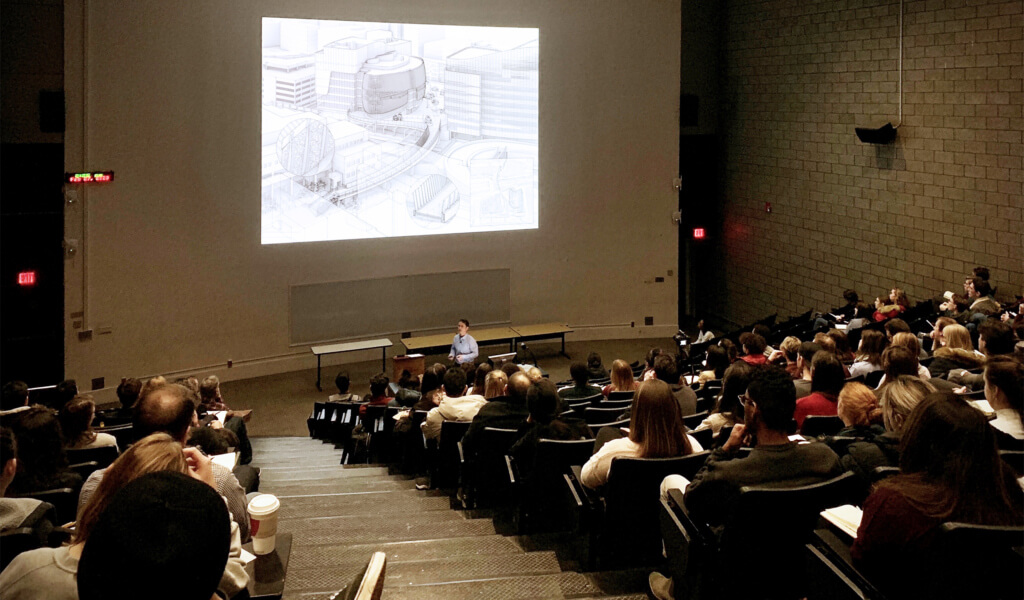 .... it was great to hear that the tools we are exploring [robots, cnc, and computation] do have a relationship to the way the firm practices.

The ideas in your work were all very interesting and seeing how your firm's beautiful modelling techniques represented those ideas and your designs was extremely inspiring, and I hope to apply what I learned from your lobby display in my own work. 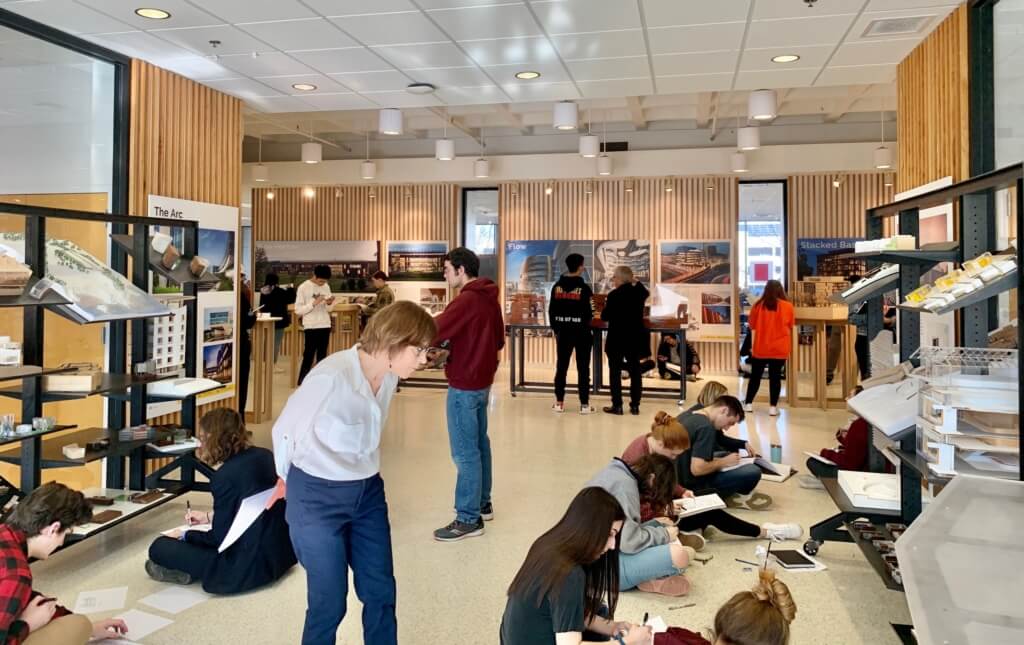 I looked at the sketches they [students] made of your exhibit and talked about how [your firm] works on projects and how the exhibit was produced – generators and constraints…all of it was just what they need to hear to open them up to how beautifully complex it is to put something in the world!

The exhibit, in combination with sustained engagement from Parke MacDowell, provided the students with a deeper understanding of design practice and specifically the role of making in the design process through both representation and prototyping. With the exhibit as background, Parke's engagement with my students exposed the role of digital design and fabrication technology--taking them out of the speculative and into the real. This engagement enhanced the impact of the exhibition and provided a glimpse into the value of our continued collaboration through the Open-Lab in Boston. 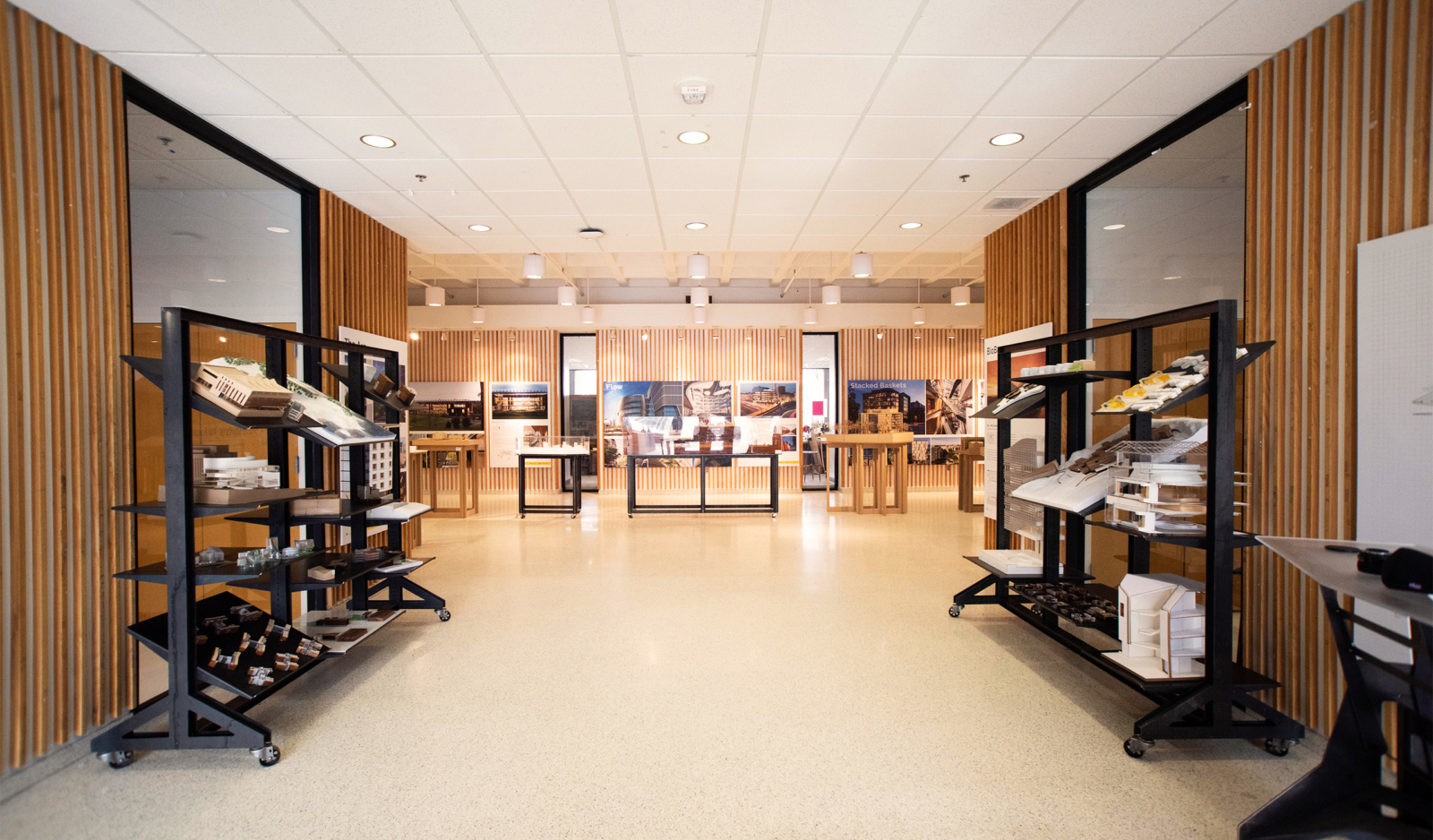 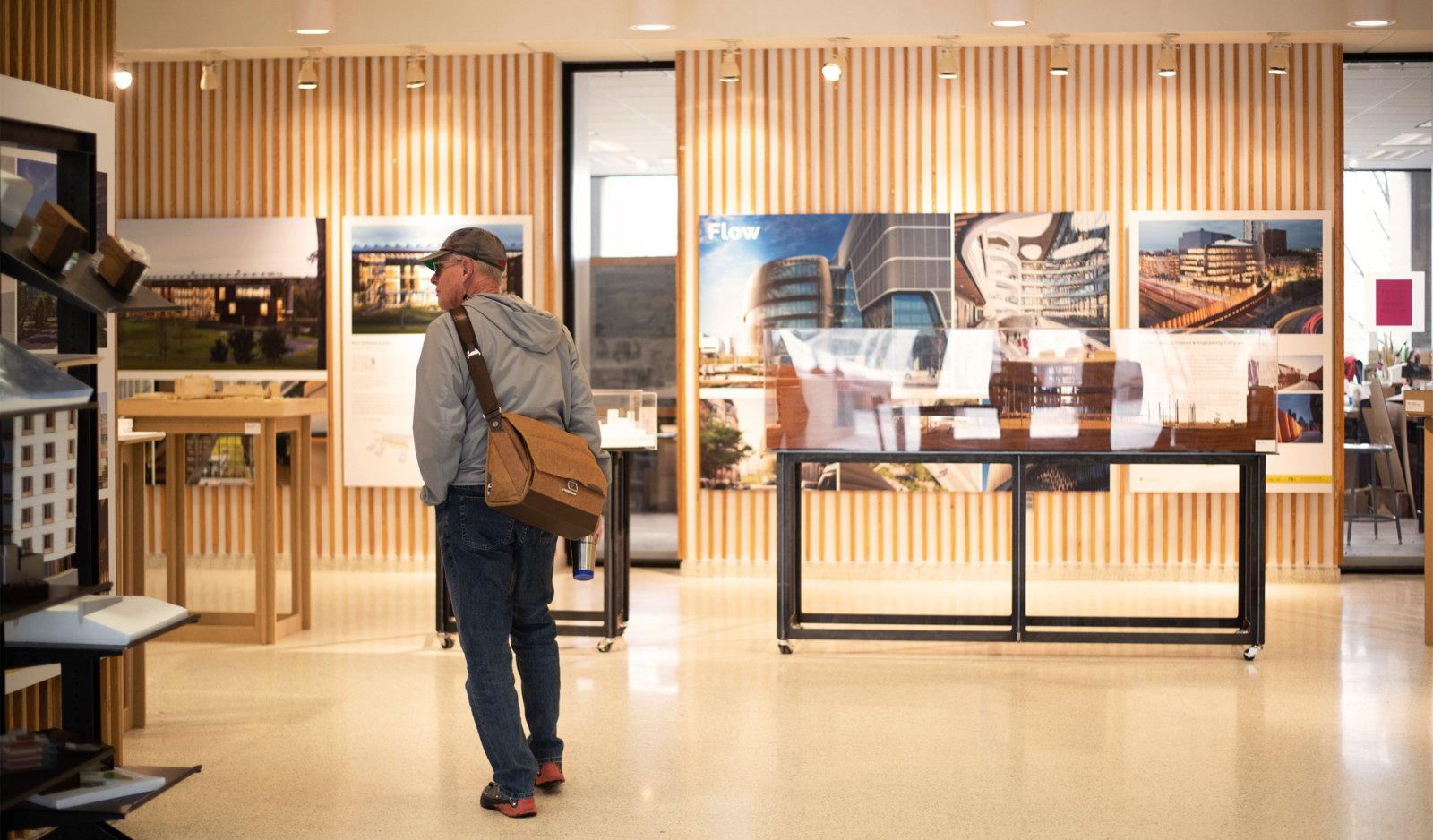 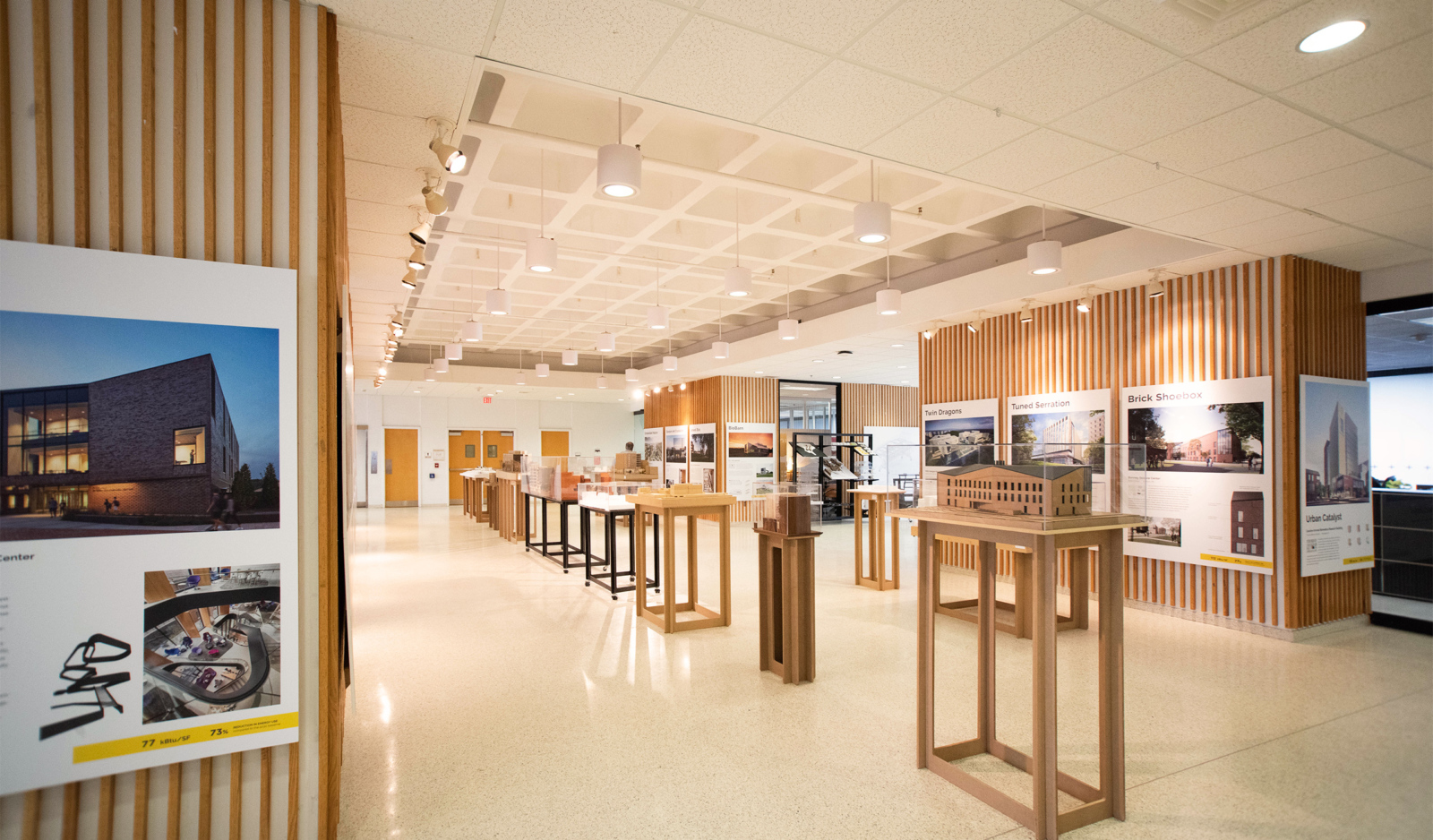 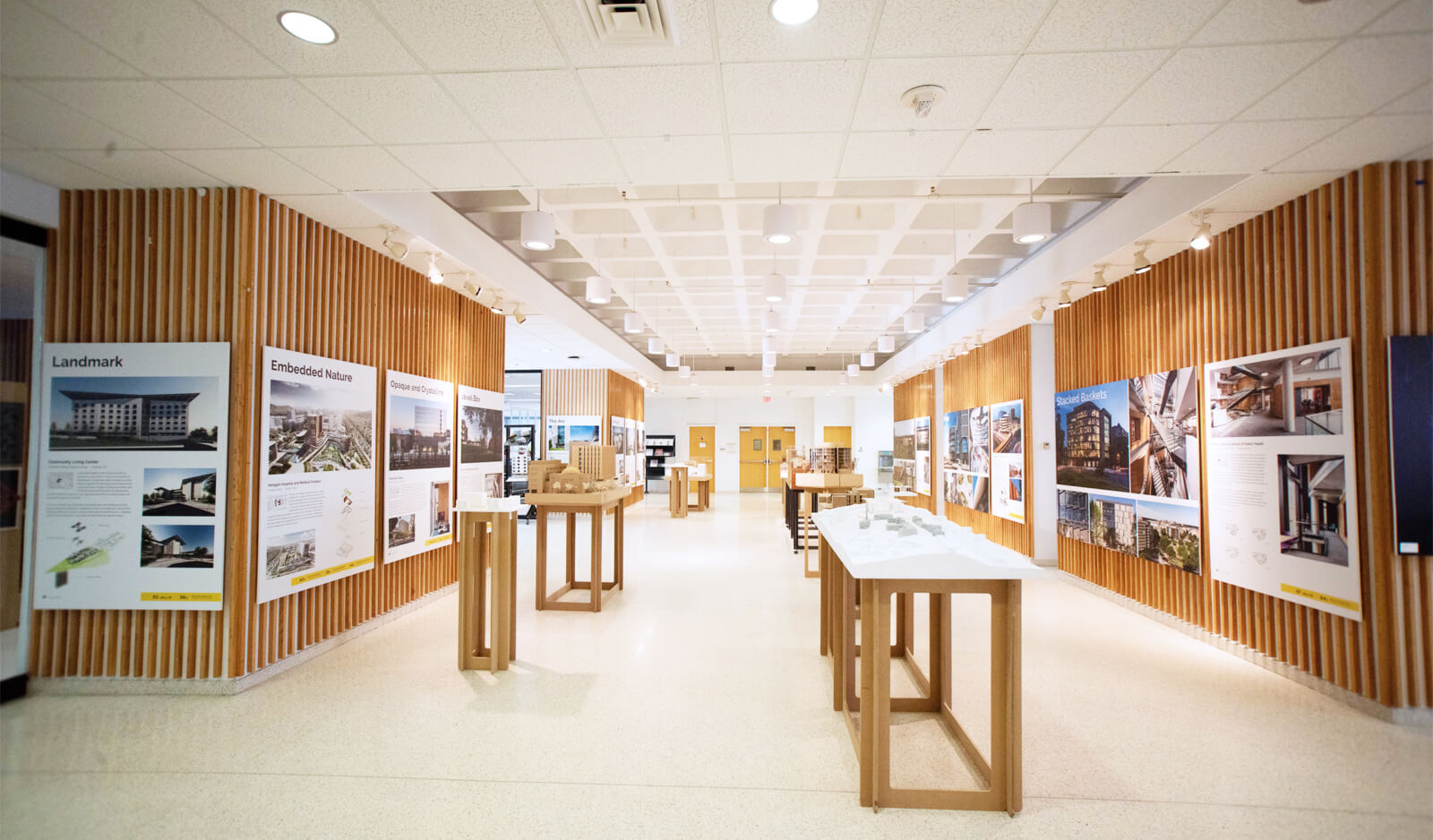 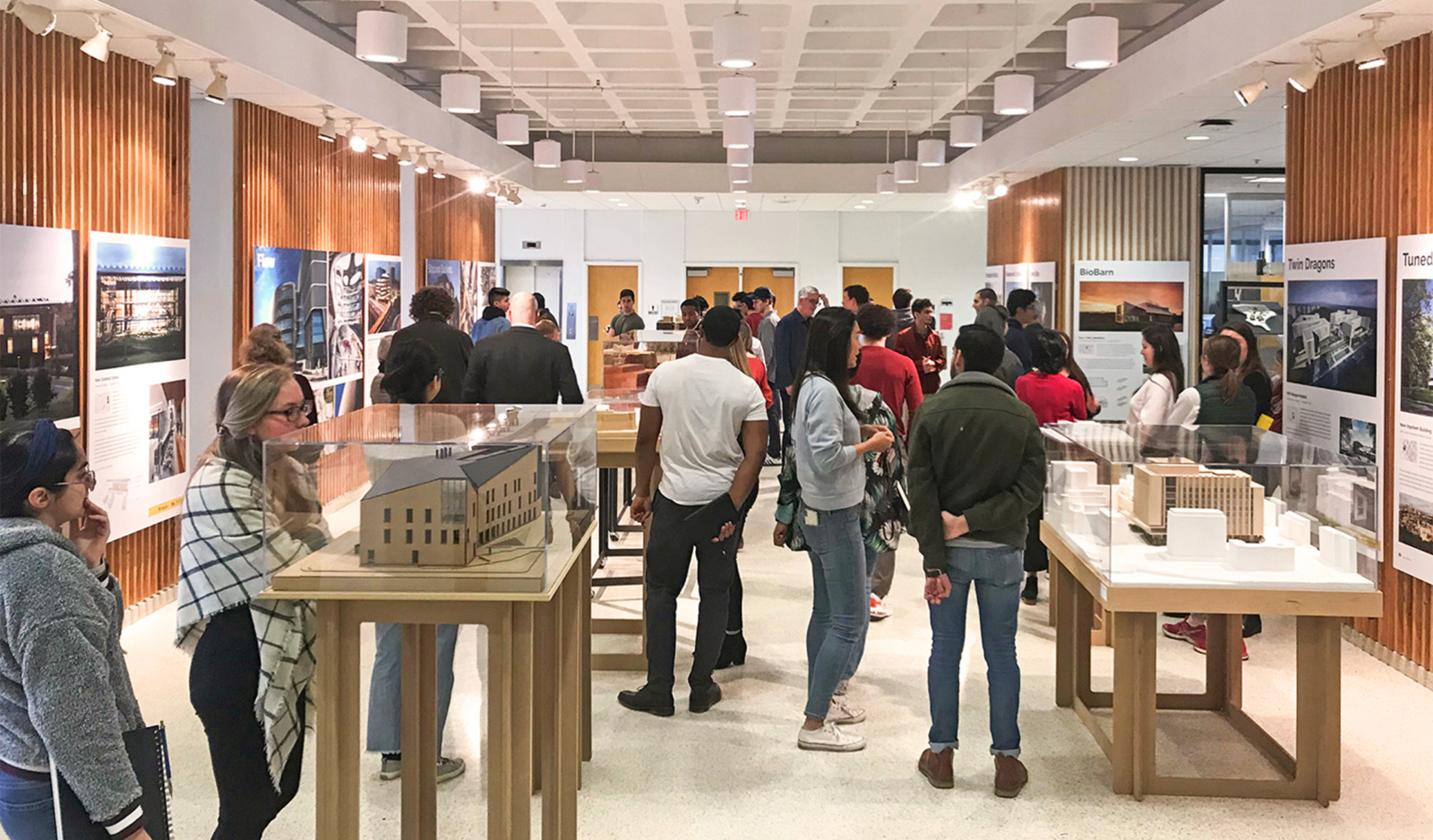 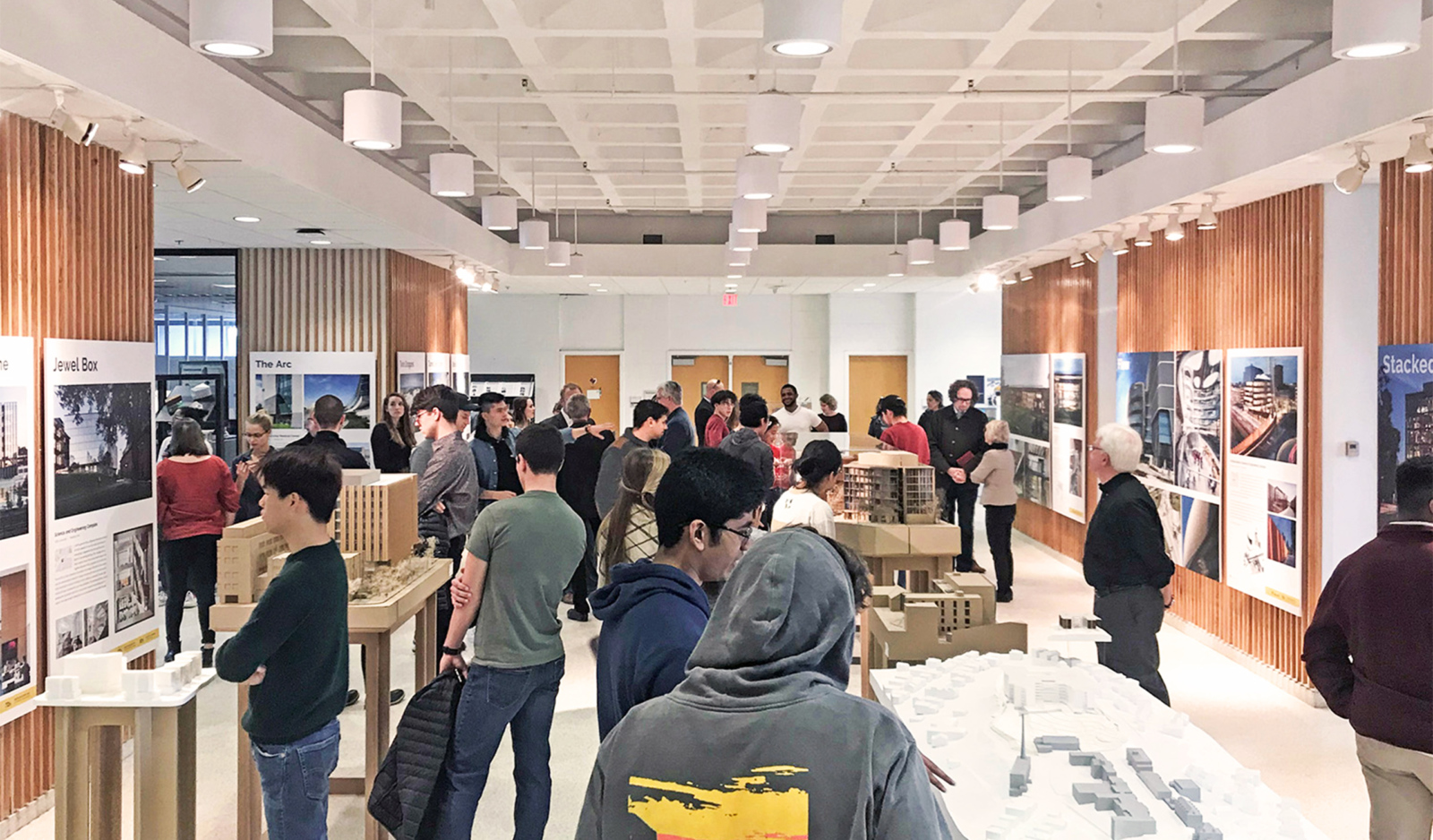 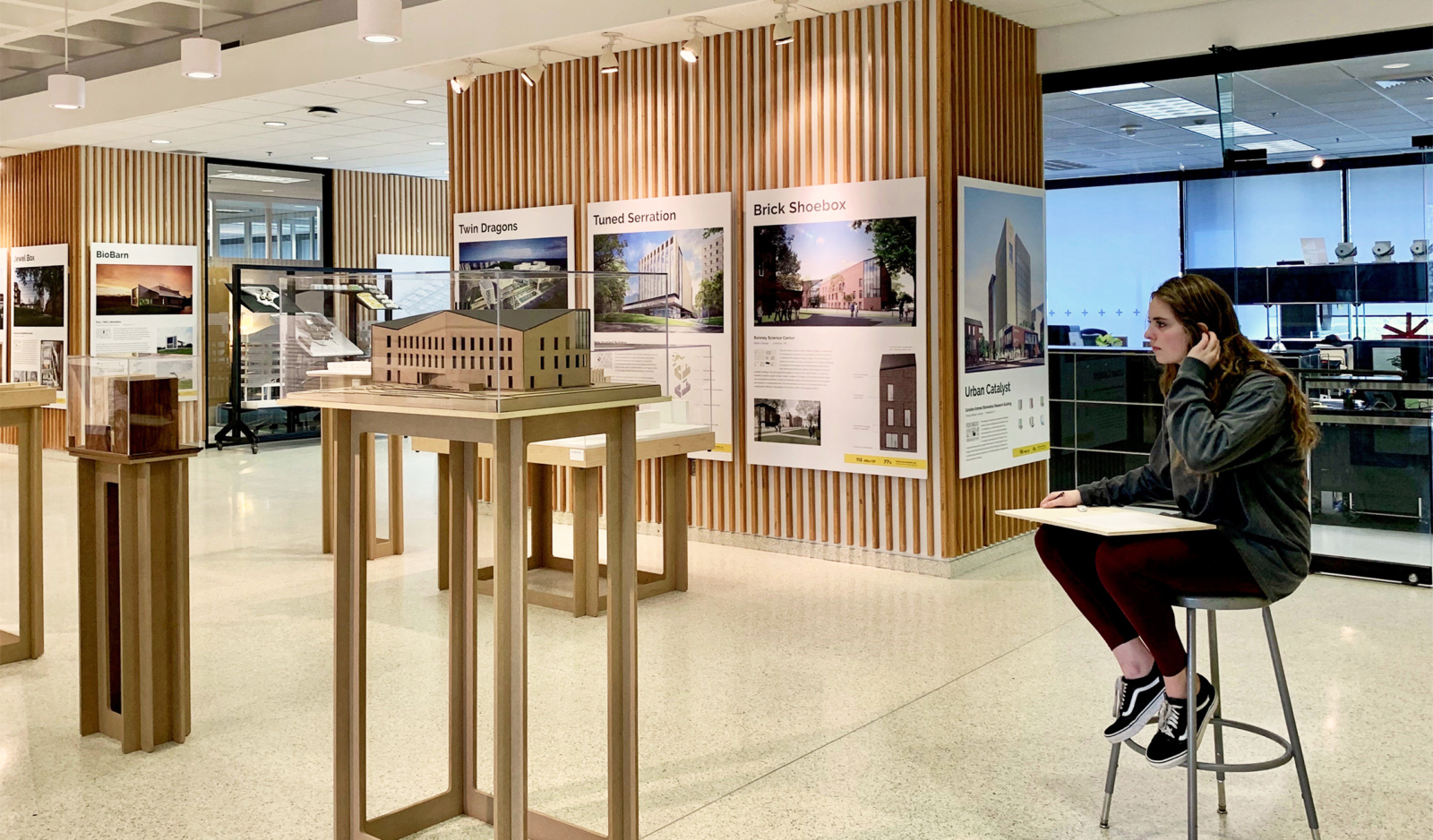 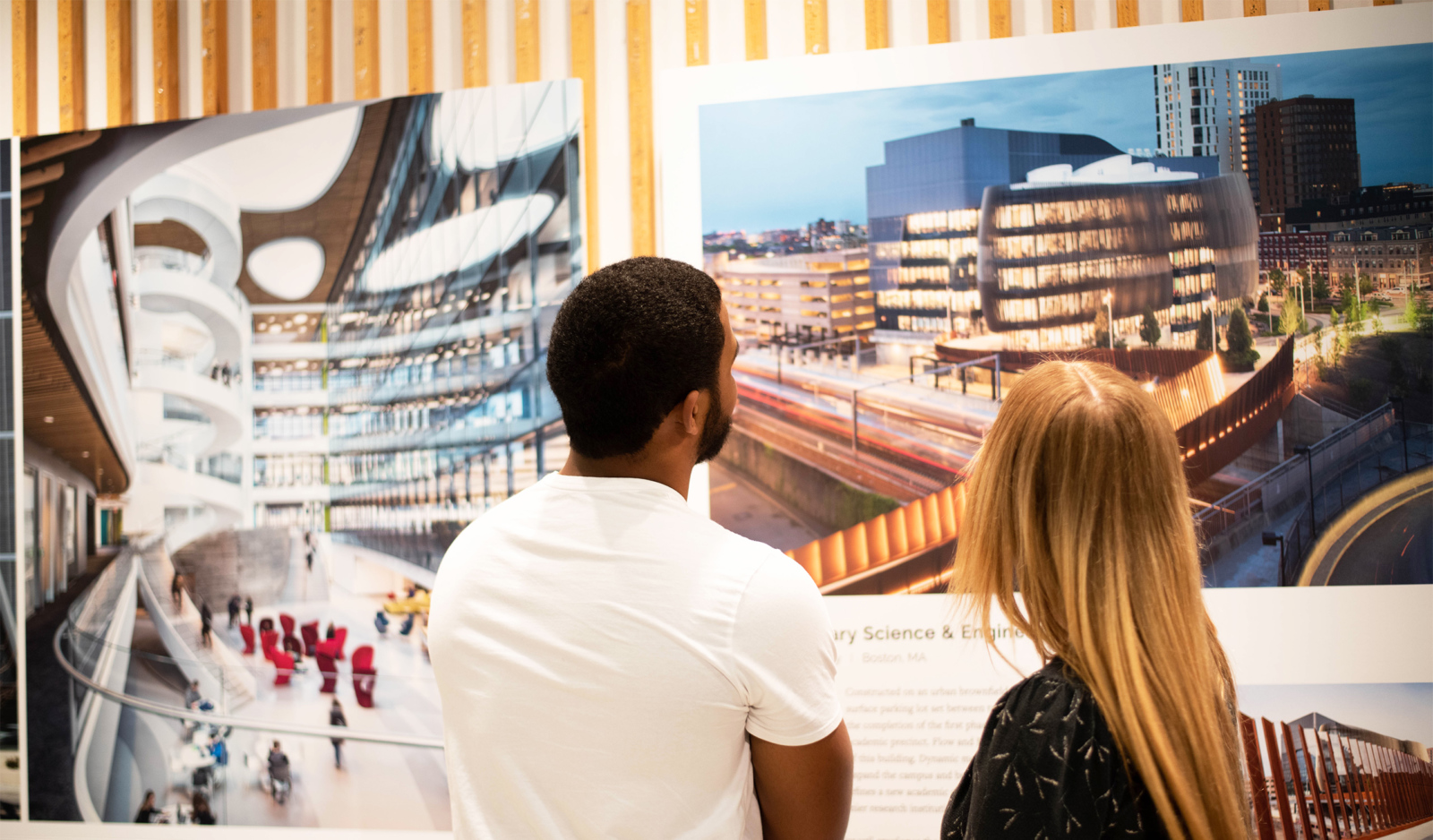 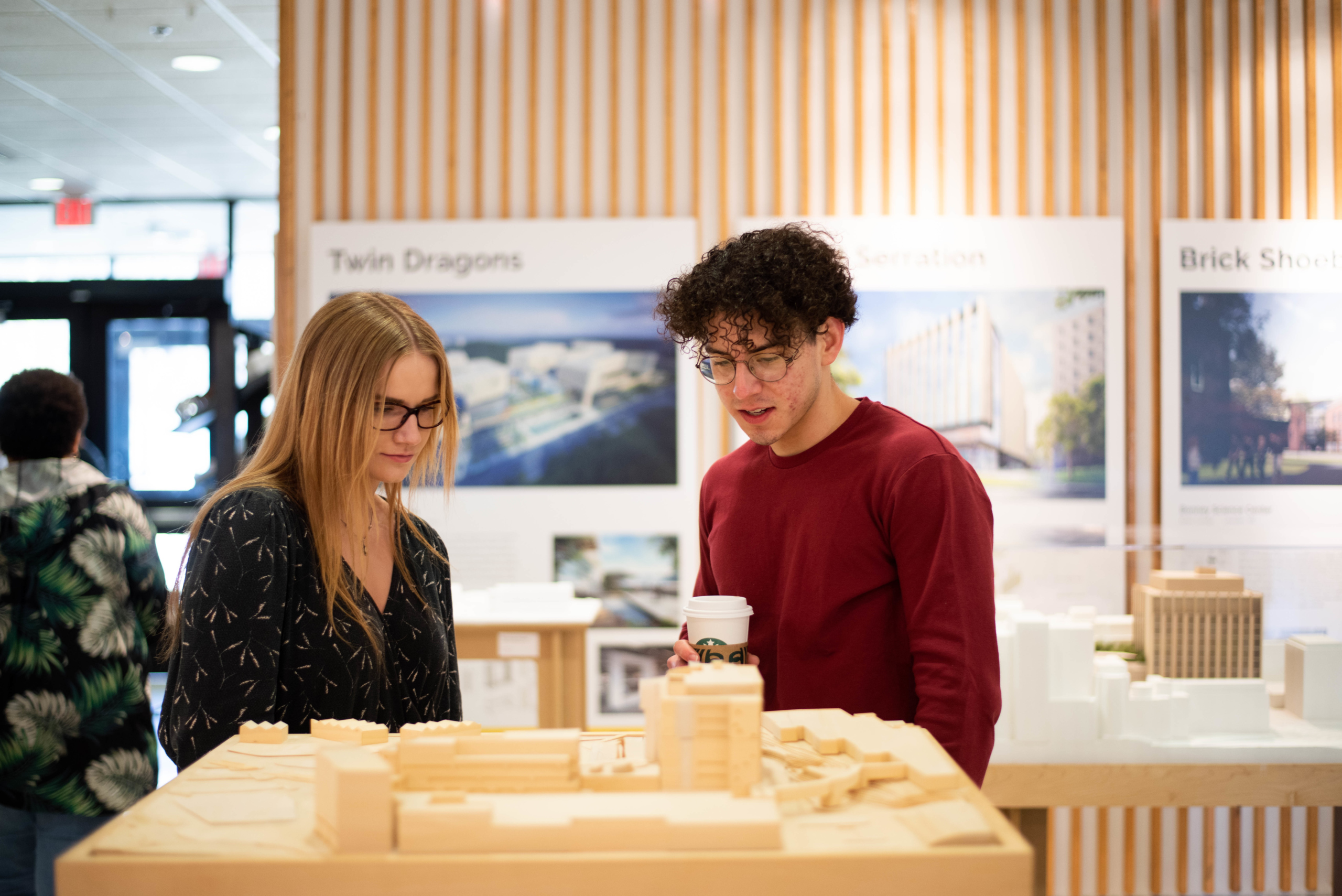 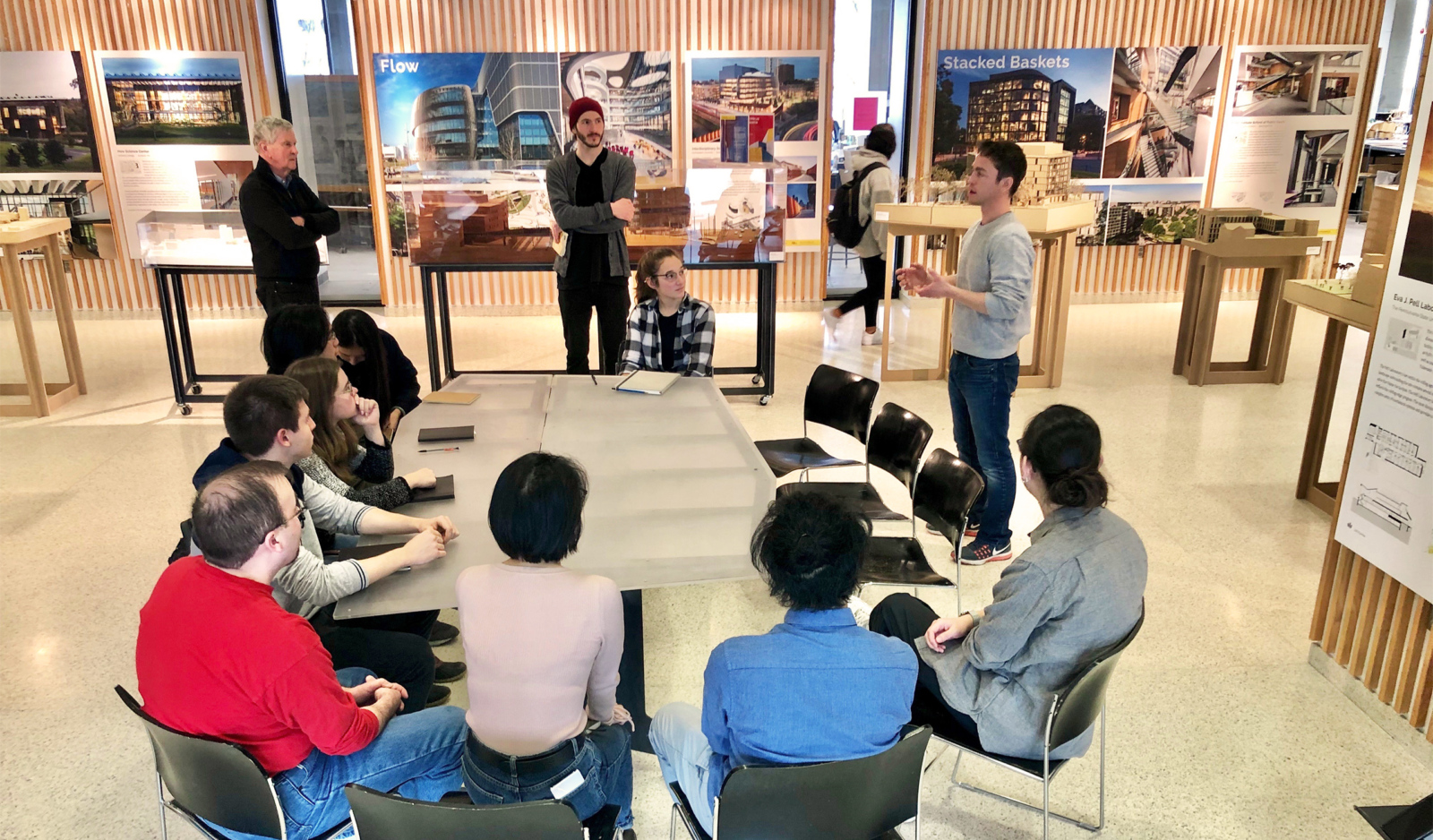 This was not a conventional exhibit – it was alive and interactive. It was an extension of our office culture and a platform of engagement and discovery for both the students and our staff which continues beyond the show’s conclusion; a design studio for rising fourth and fifth year students at our office in Boston is in the works for the upcoming year.

For the Virginia Tech alums in our office, the exhibit elicited a great deal of pride, gratitude and sentimentality. Joy in the intersection of past and present, joy in the continuity of an education that began in Blacksburg and continues nearly 800 miles north in Boston.