Part two of a five part series based on Payette’s Design Week, a view into the tools and ways in which process, iterate, and discover at every level of design.

Model
Payette heavily invests in model-making that takes advantage of the full range of model scales. Models are used as tools for creative generation, as well as for representation. For this exploration, we focused on two extremes on the scale spectrum, The Tiny and The Tall, and nothing in between. We found that The Tiny, the smallest-scaled models in a project, can express some of the largest ideas, while The Tall, full sized 1:1 scale models, typically focus on investigations with a more localized impact. In comparing these two extremes a number of themes emerged that transcend both The Tiny and The Tall: aesthetics, redirection, engagement, precision, and comfort. 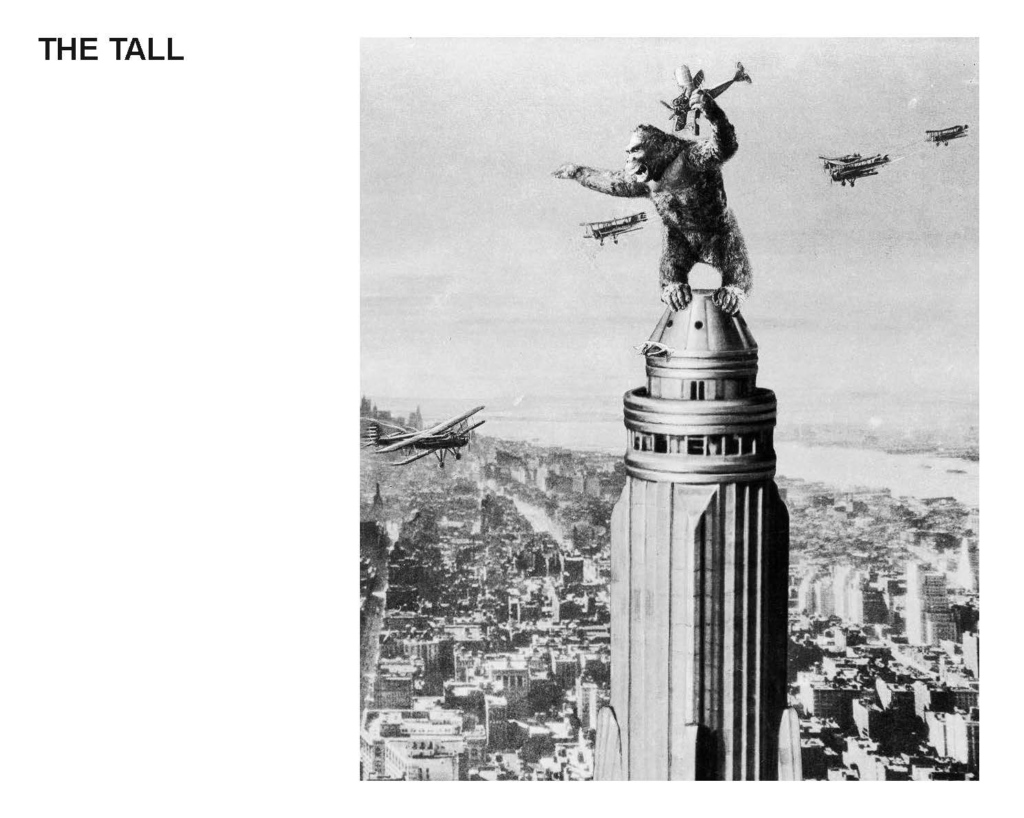 Aesthetics
Payette uses models to explore and evaluate the permutations of an idea based on visual qualities. The Tiny: For the Bonney Science Center at Bates College, the team made a series of tiny foam models to explore how a solid form could be sculpted through subtraction. This type of foam allowed for numerous, quick studies with an inexpensive, playful material. The team used these tiny models to imagine how different forms would be perceived from multiple viewpoints around the campus ultimately directing the building’s massing. The Tall: For the Rockwell Center at Lafayette College, the team explored how manipulating the face of large, concrete panels could render different visual effects by either modifying the plane of the surface or applying texture. These large models explored schemes from subtle to dynamic and guided the team to vertically segment the panels and “flake” back one corner to create sharp, repetitive shadow patterns. Both series had an important impact on how the aesthetic of the final design turned out. 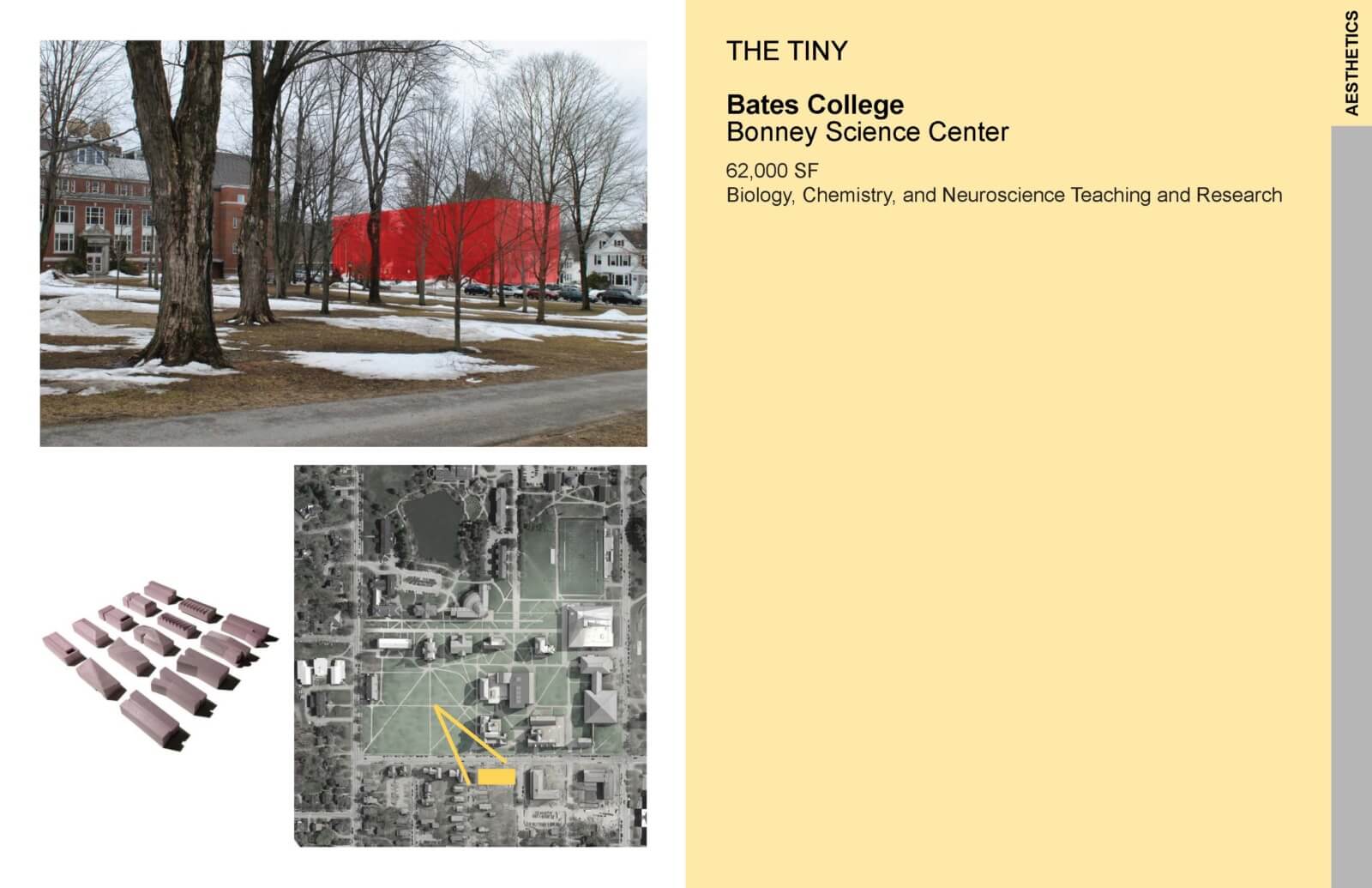 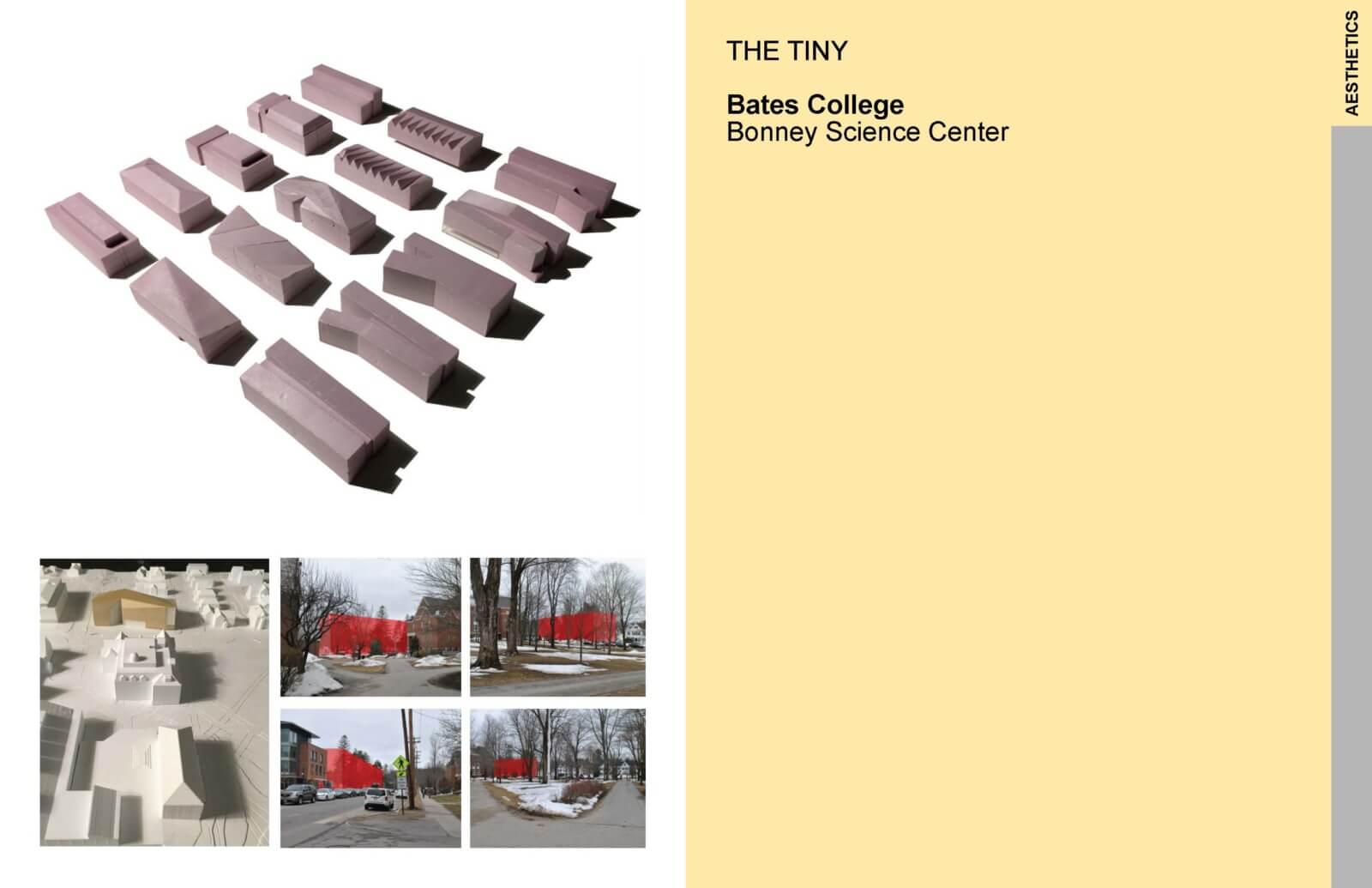 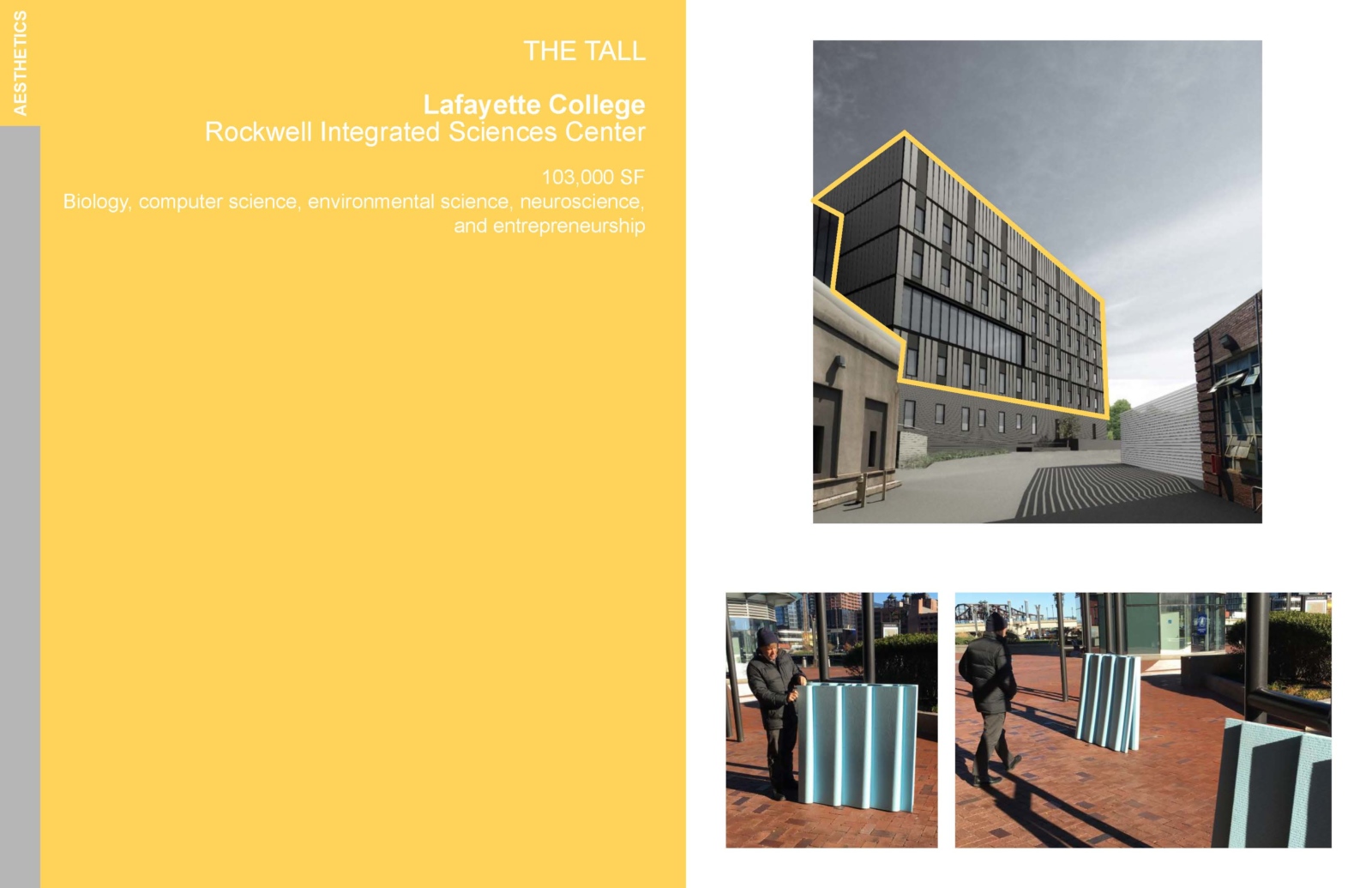 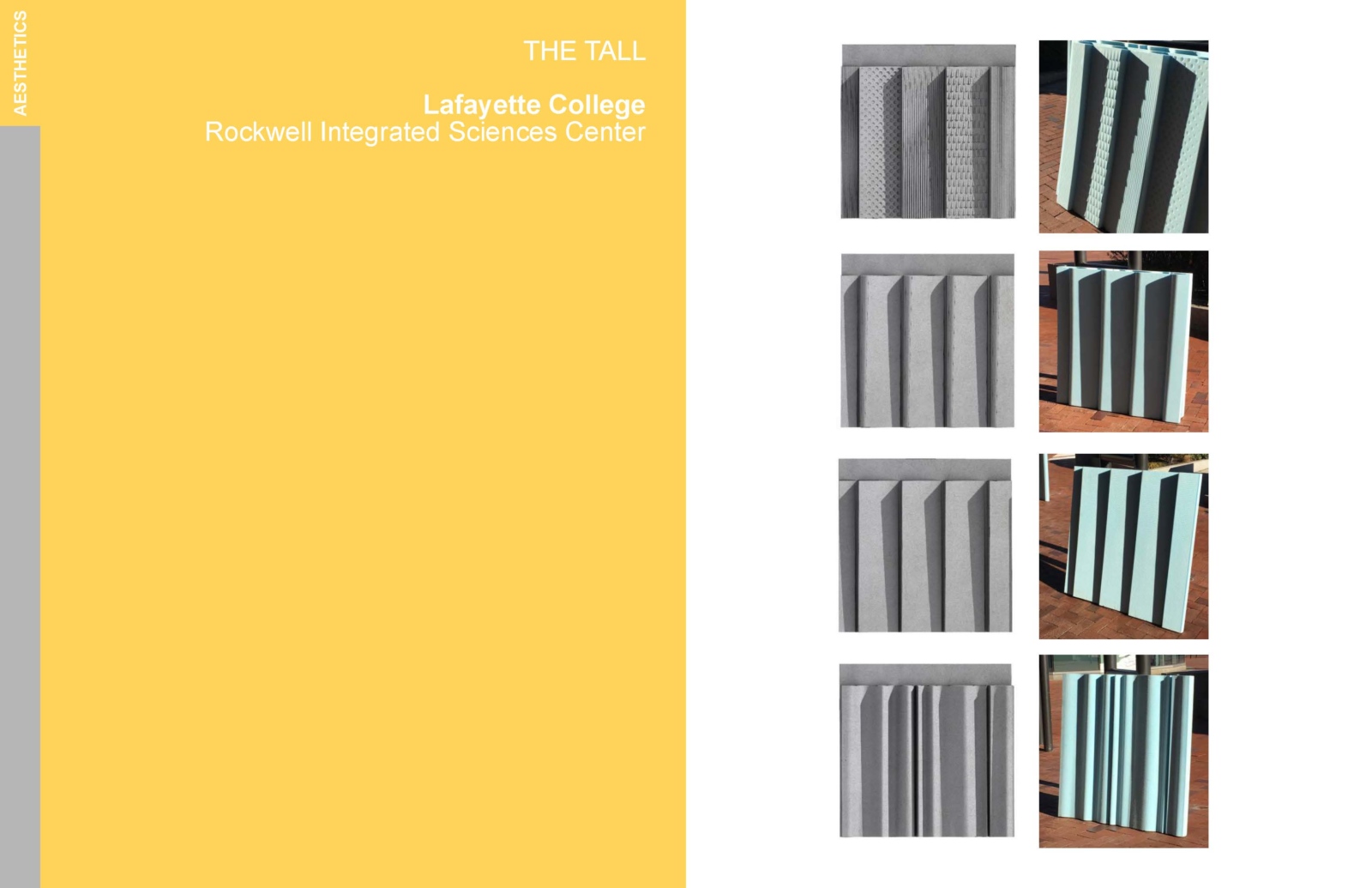 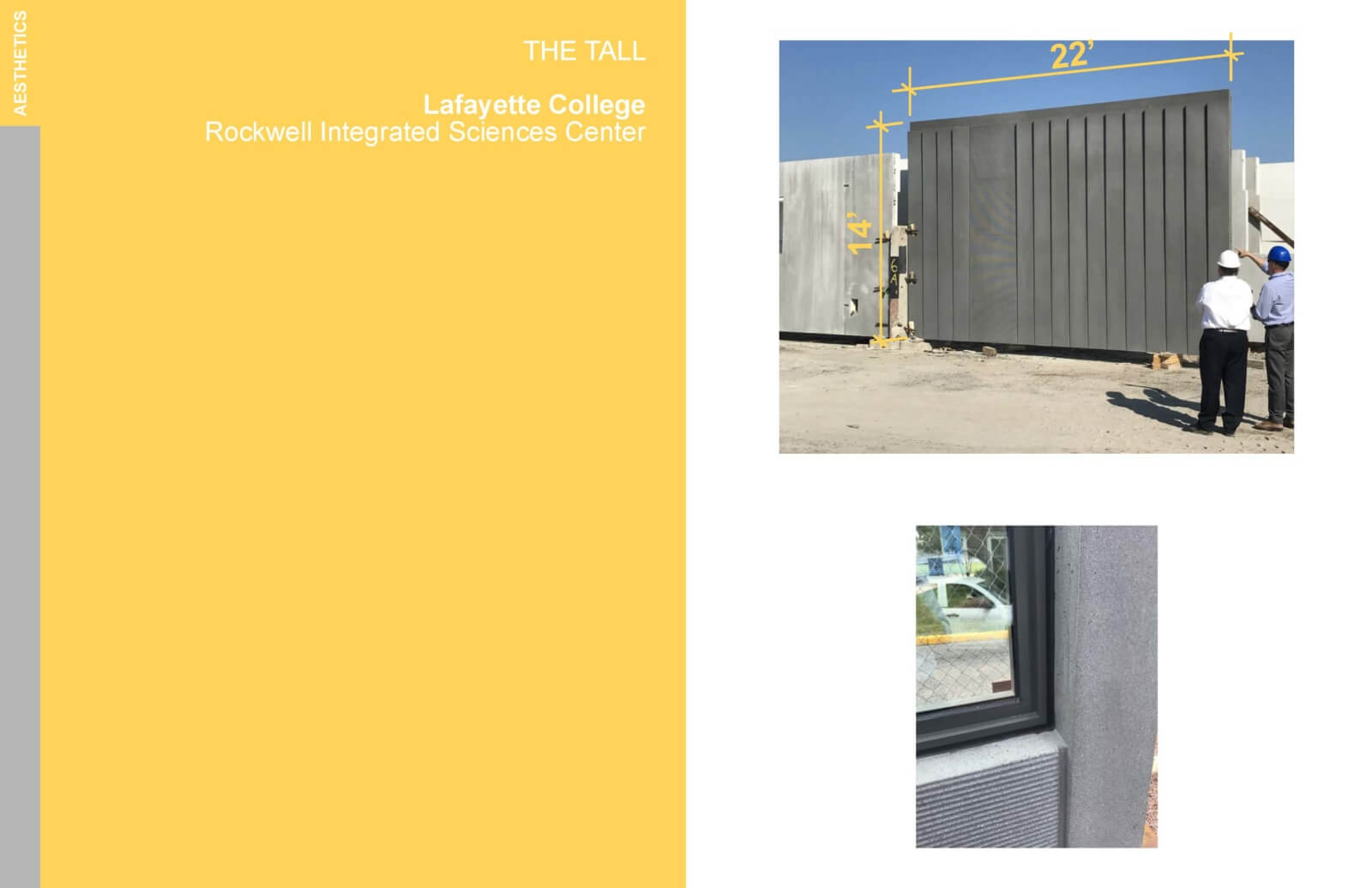 Redirection
Models can be instrumental in altering the course of a project’s scope or design objective. The Tiny: For Yale New Haven Health, Payette developed a master plan which included the study of four locations for a new ambulatory care center. Zoning regulations, however, did not allow increases to square footage on one site, requiring any addition to be offset by the demolition of an equal area of the existing facility. A tiny model was made to visualize this impact. It was very clear that an addition was not feasible since it would compromise too much of the existing facility, and the client and the team redirected the master plan. The Tall: Large scale models were used for the guardrail design at the University of Connecticut Materials Science Building. Guardrails are a key feature of four multi-story circulation spaces that slice through the building defining “neighborhoods”. A full-scale mockup of the guardrail was made using particle board for the perforated metal panels, while the top handrail was fabricated out of wood routed on the CNC, with joints like a model train track to allow for adjustment of the alignment of each piece to account for material tolerances. After studying these models, constructability issues were revealed, and the team ultimately embraced a different design direction that visually dissolved the railing allowing for greater transparency through the “neighborhoods”. 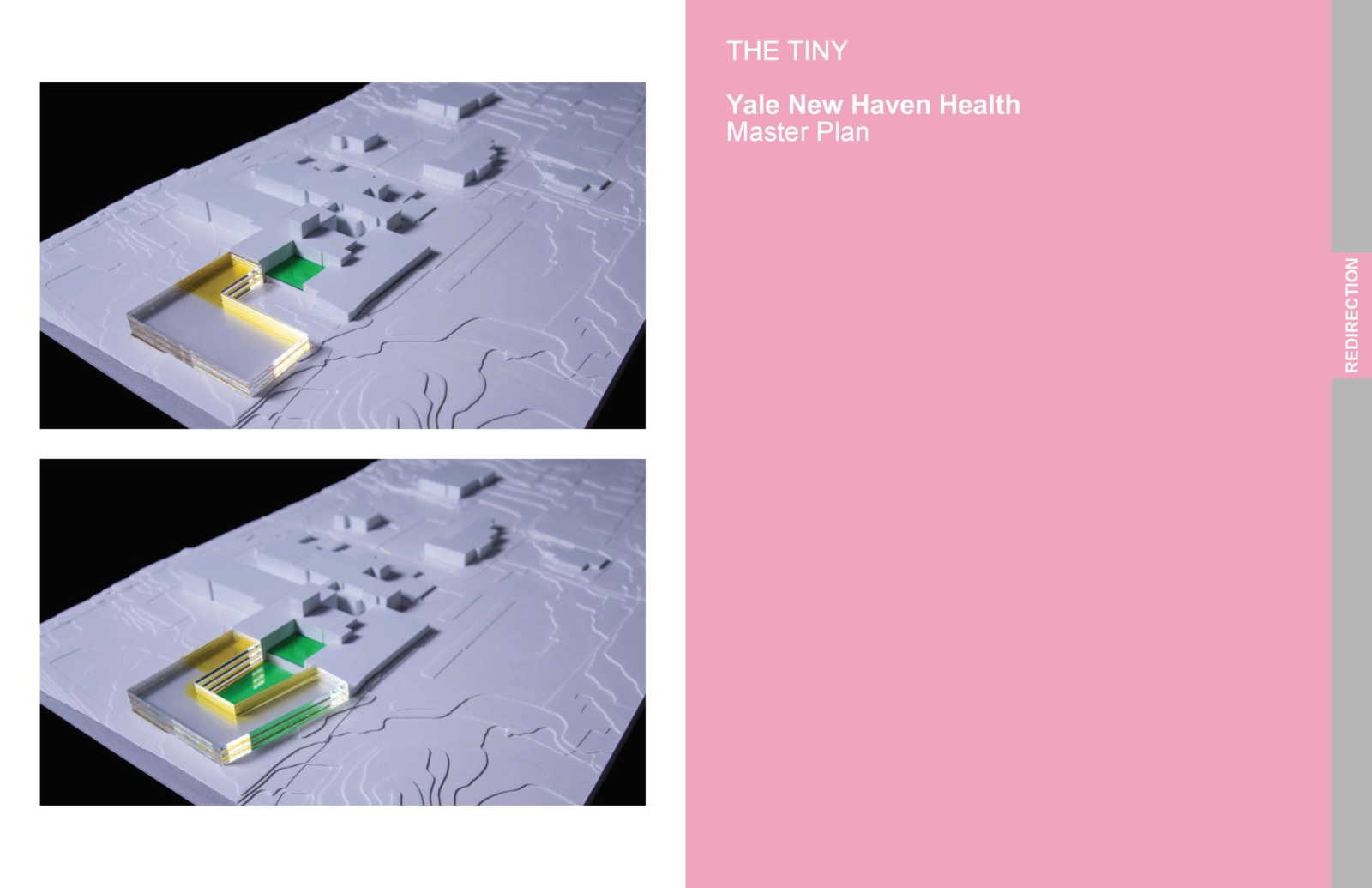 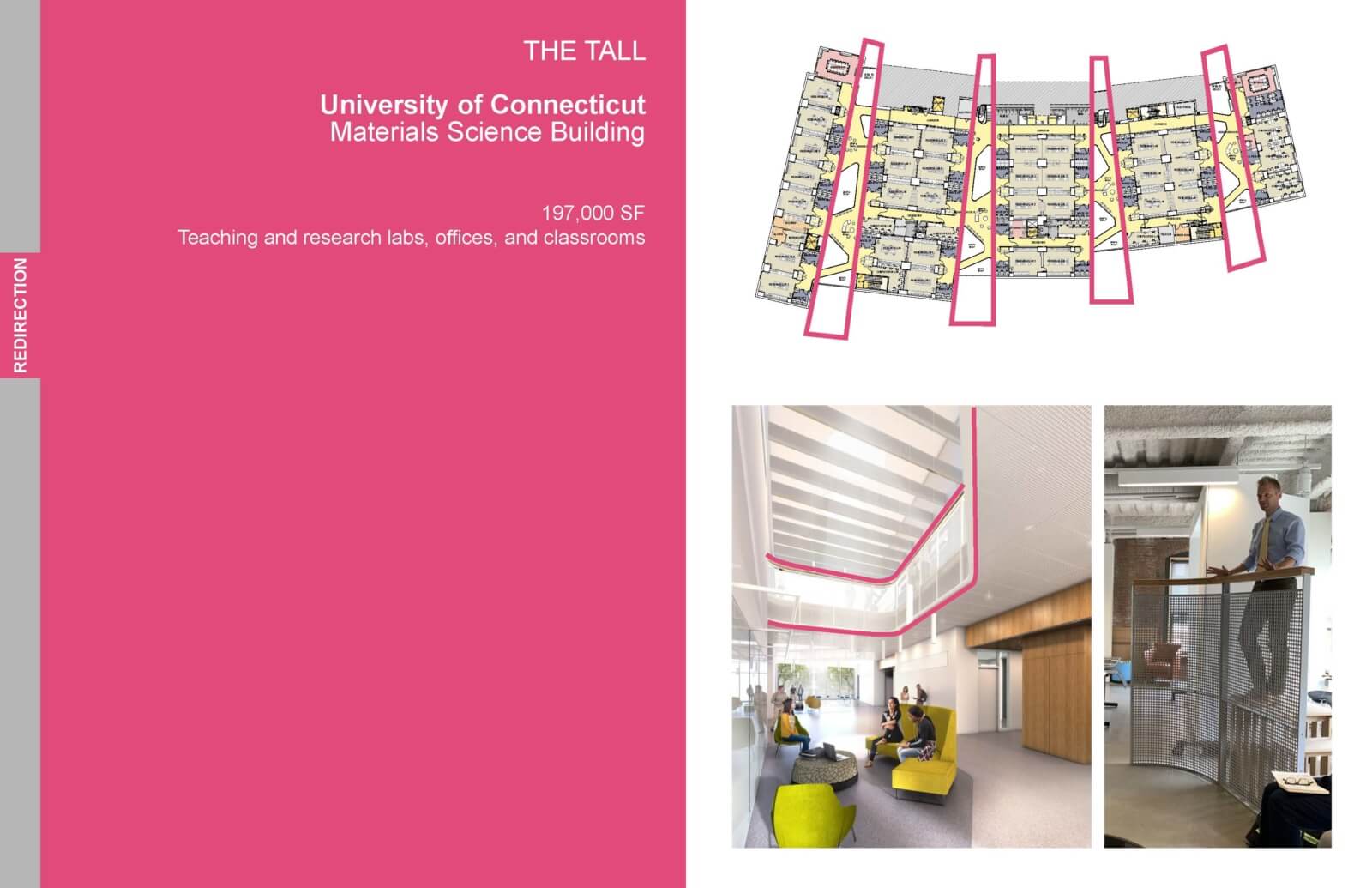 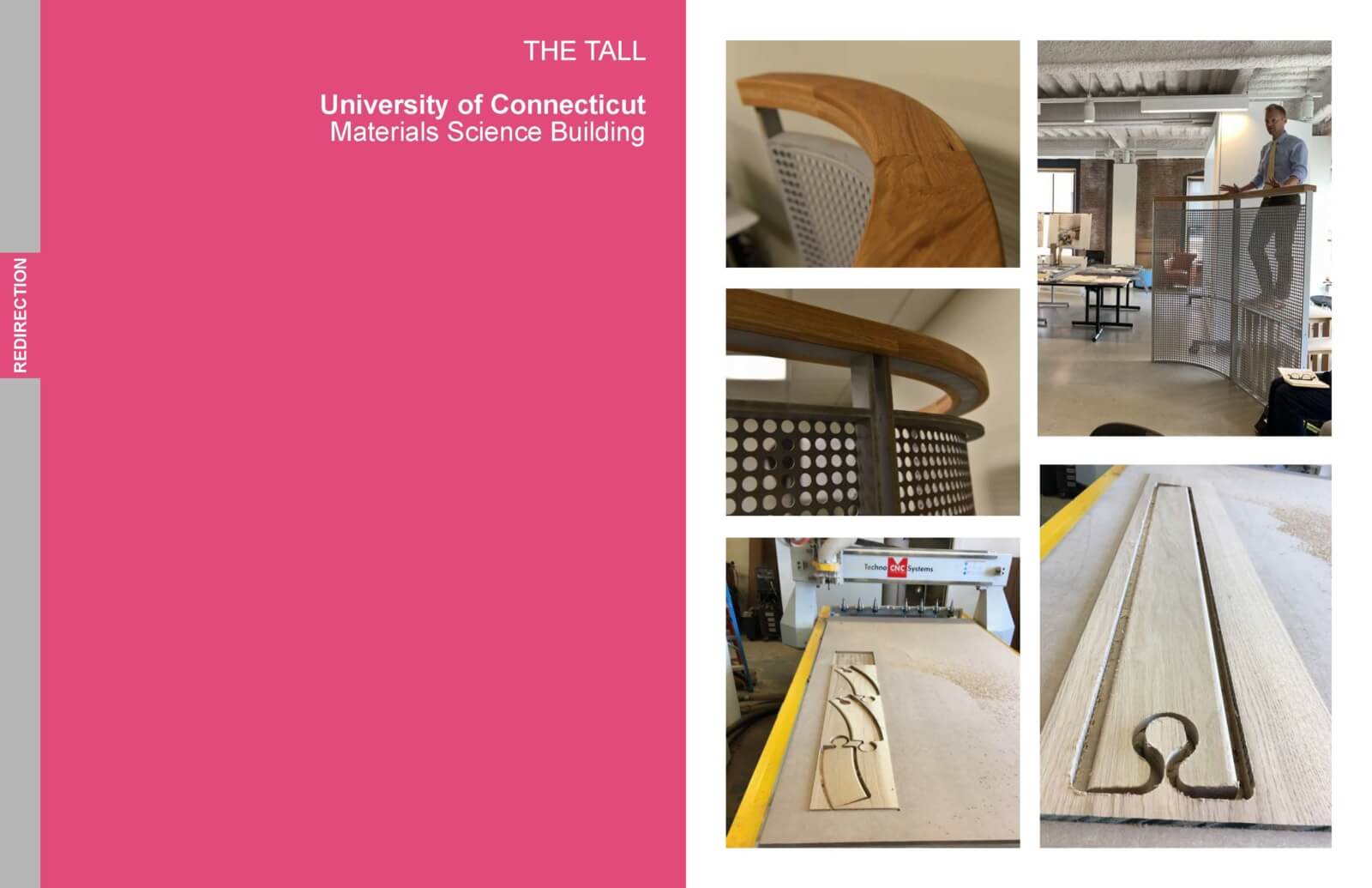 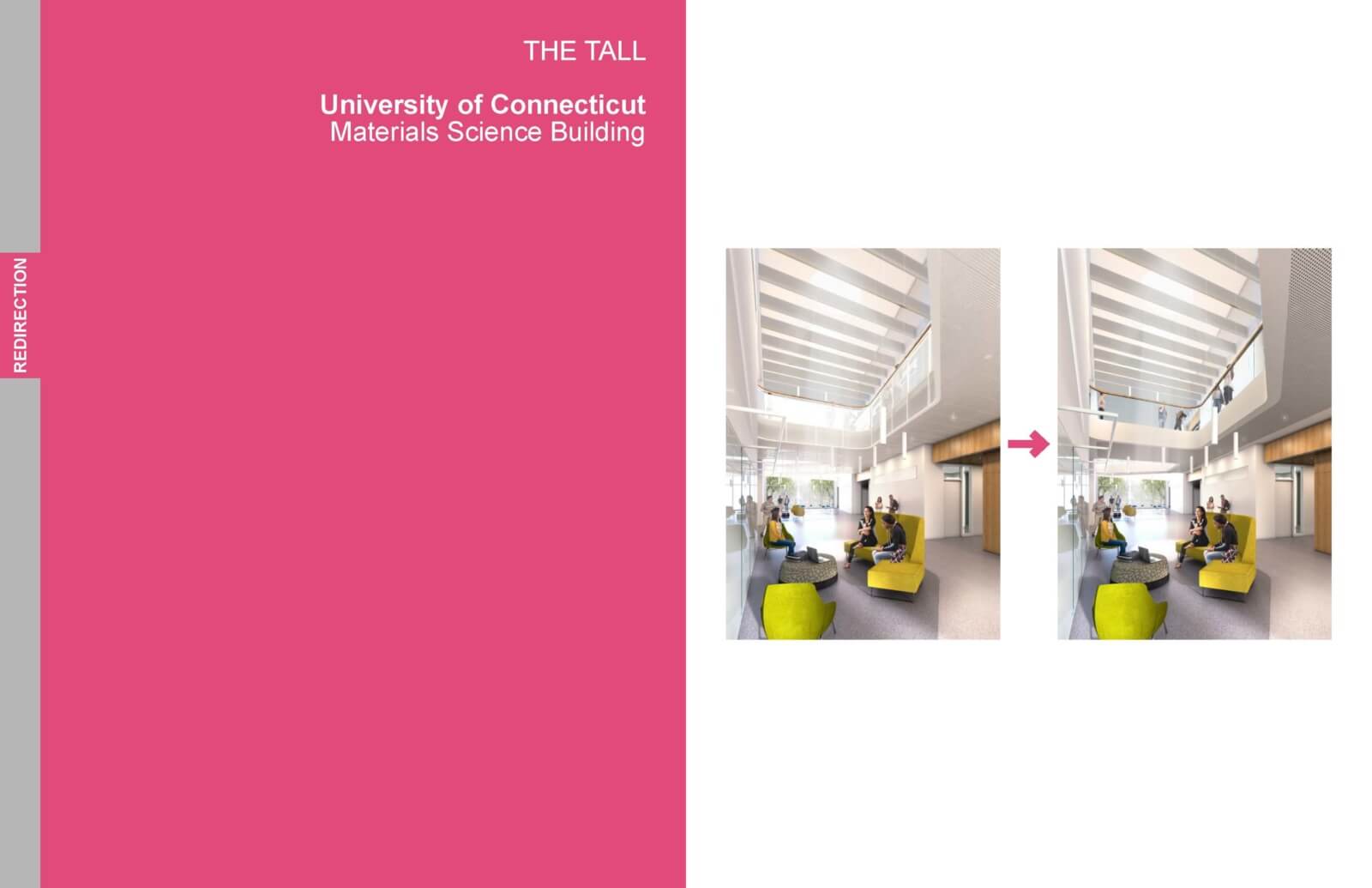 Engagement
By engagement we mean using models as tools to facilitate user interaction and feedback. For both the projects in this category, the teams actually took the models to the user to facilitate decision making. The Tiny: For the University of Hartford, a site model at 1:50 scale and was used to understand how to integrate a new building into the Academic Quad. Possibilities were open-ended, so the team developed a handful of schemes that maintained the integrity of the Quad’s green center. However, when the client was presented with this model it became clear after manipulating the schemes that there was an opportunity for a more radical solution, a surprise to the team and client. The Tall: User interaction was also important for Chelsea Soldiers’ Home, where a full-scale mockup of a patient room was constructed on site. The model was built using foam core for walls and millwork and paper cutouts of all sorts of devices to make the experience as realistic as possible for the users. The model was extremely successful in many ways. For the team, constructing the “room” themselves (rather than through a contractor) allowed them to better understand how rooms would realistically be built. For users, it allowed for direct engagement with the model and immediate opportunity for feedback through questionnaires and sticky notes. 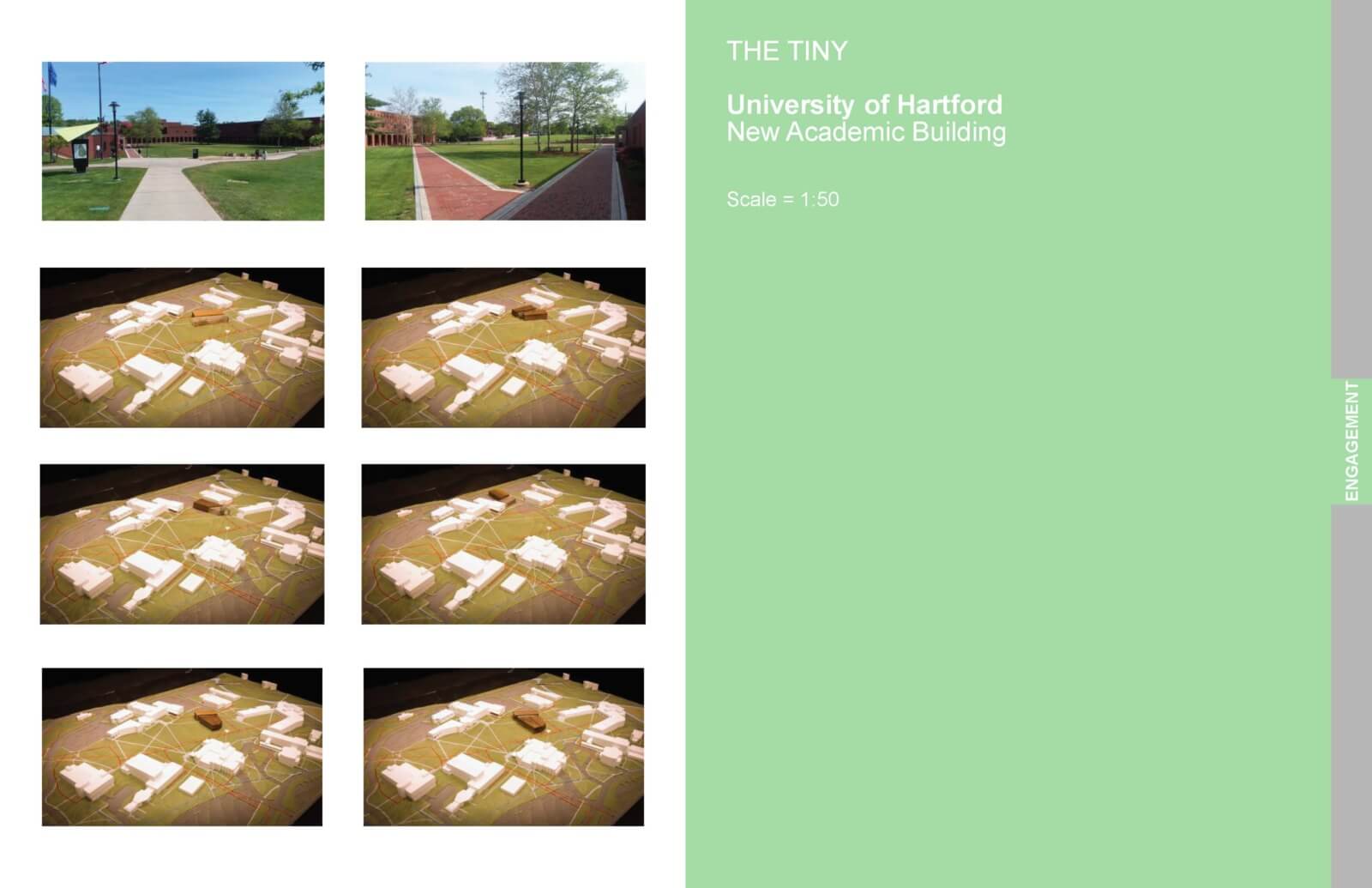 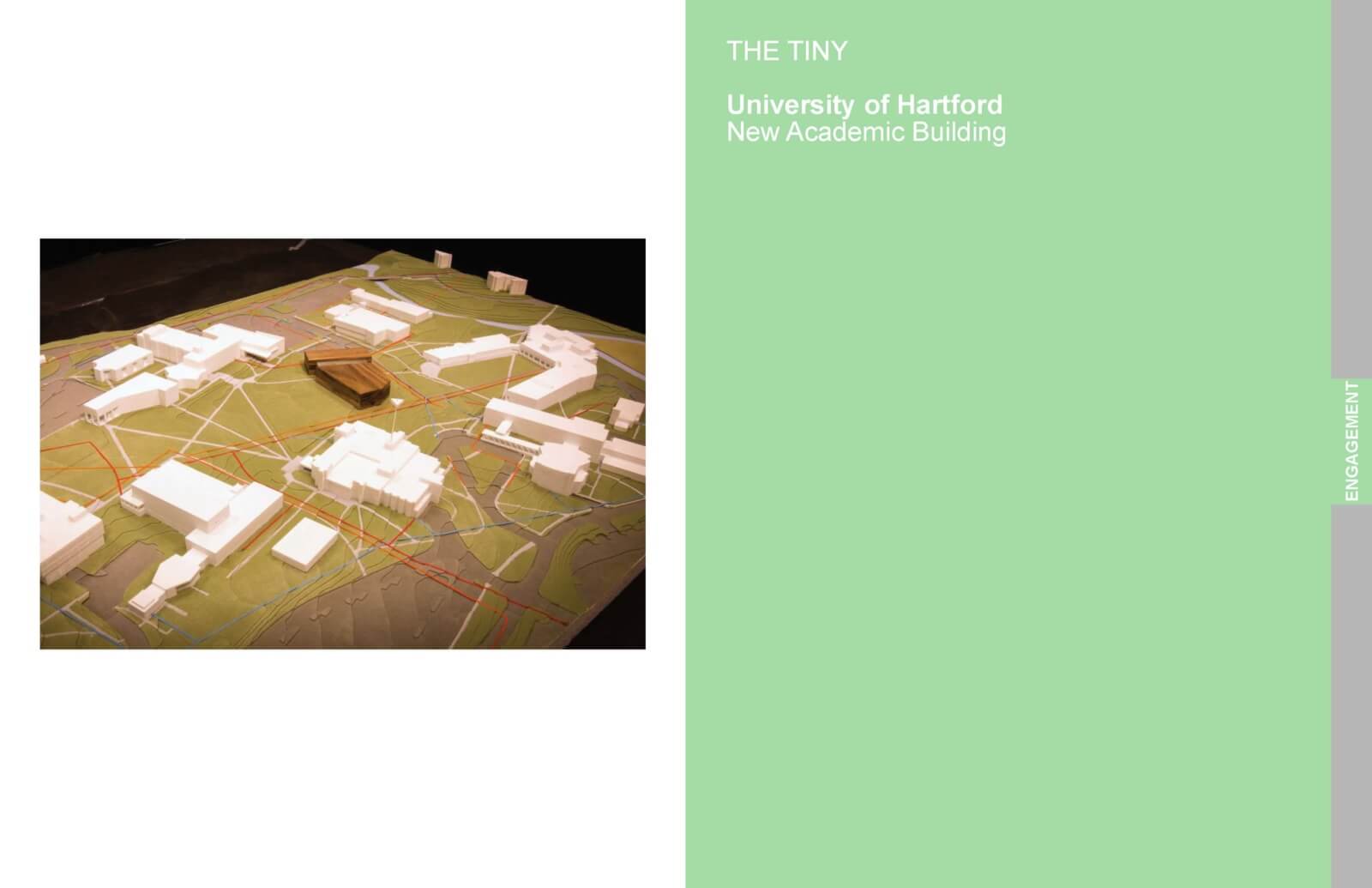 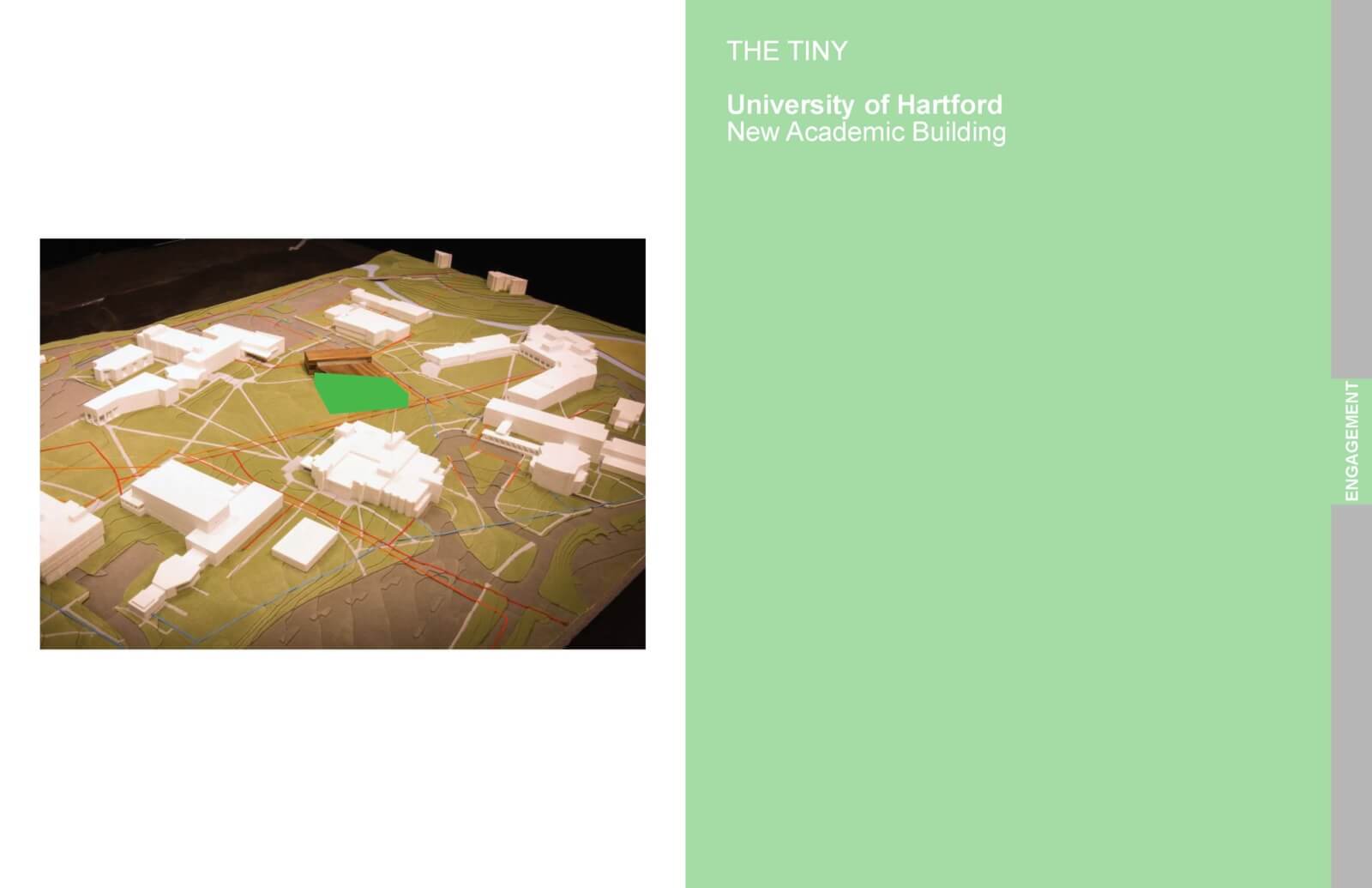 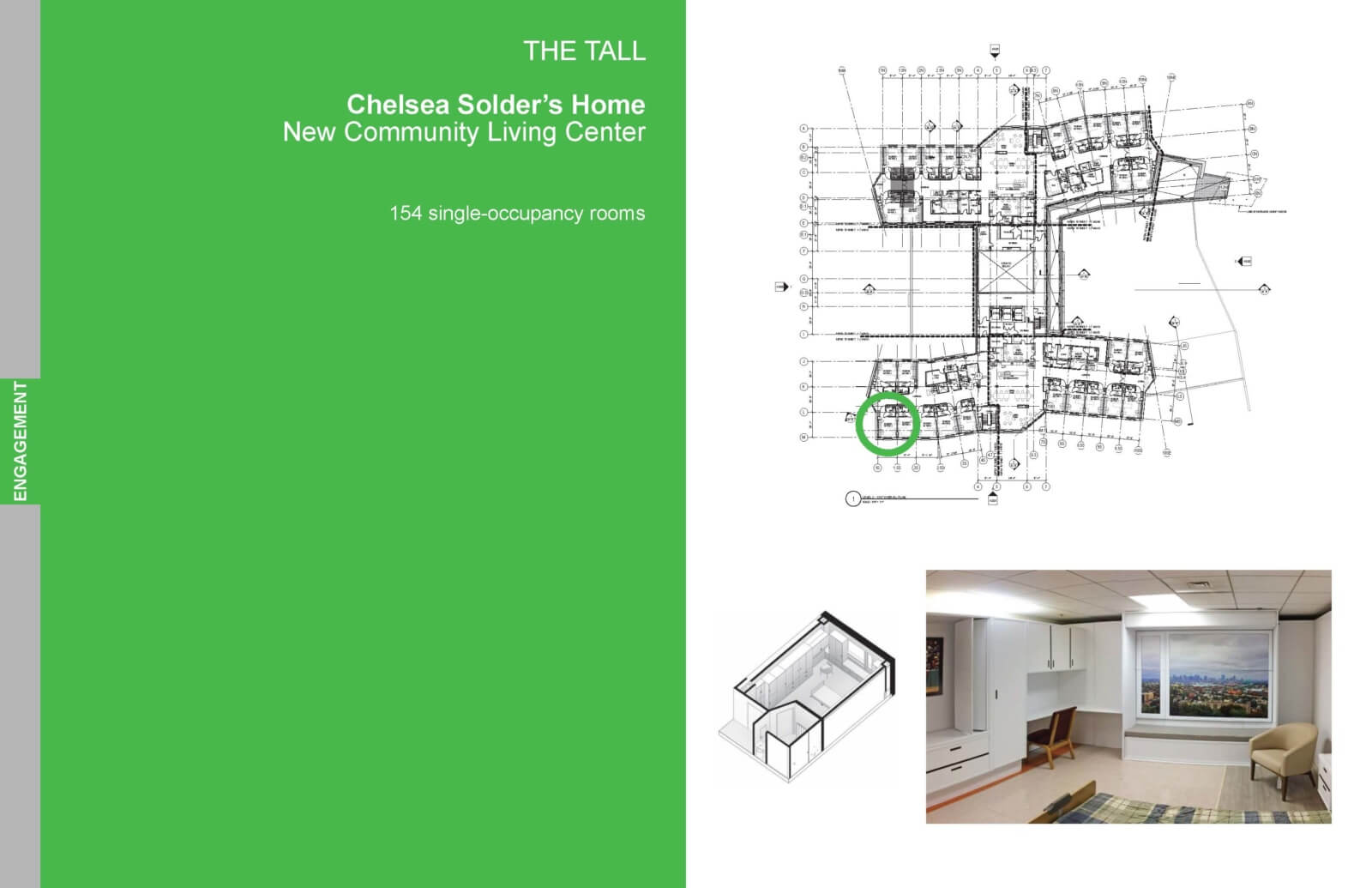 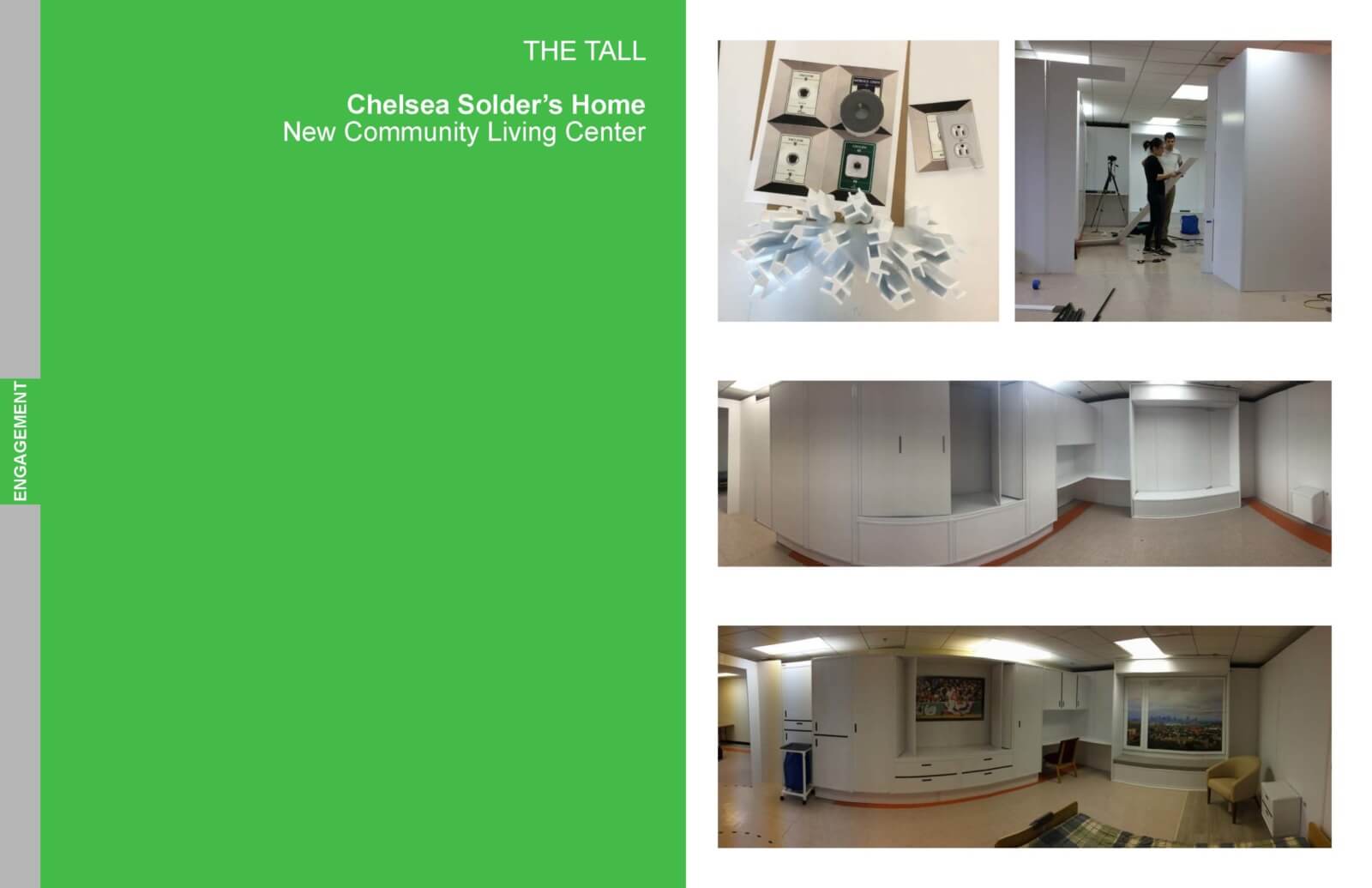 Precision
Precision is about celebrating models that achieve a high level of accuracy and clarity of what they represent. The Tiny: Hengquin Hospital is a 1.5 million square foot facility in China that strongly integrates the landscape with the building design. The project was a competition, for which a tiny 1:2,000 model was 3D printed as a solid piece so it could fit inside of a carry-on suitcase – now that’s tiny! The high resolution of the printer captured complex site relationships and formal manipulations helping the team win the project. The Tall: The Beth Israel Deaconess Medical Center New Inpatient Building will be clad in terracotta tile panels, whose form and texture needed to be studied. The long lead time for the custom panels led the team to mill an in-house full-size model using high-density foam with a substantial support structure. This material allowed for a higher pattern resolution, allowing subtle variations to be tested. The team explored how pattern variations changed in different light conditions and used the model to inform constructability, material tolerances, and visual complexity. 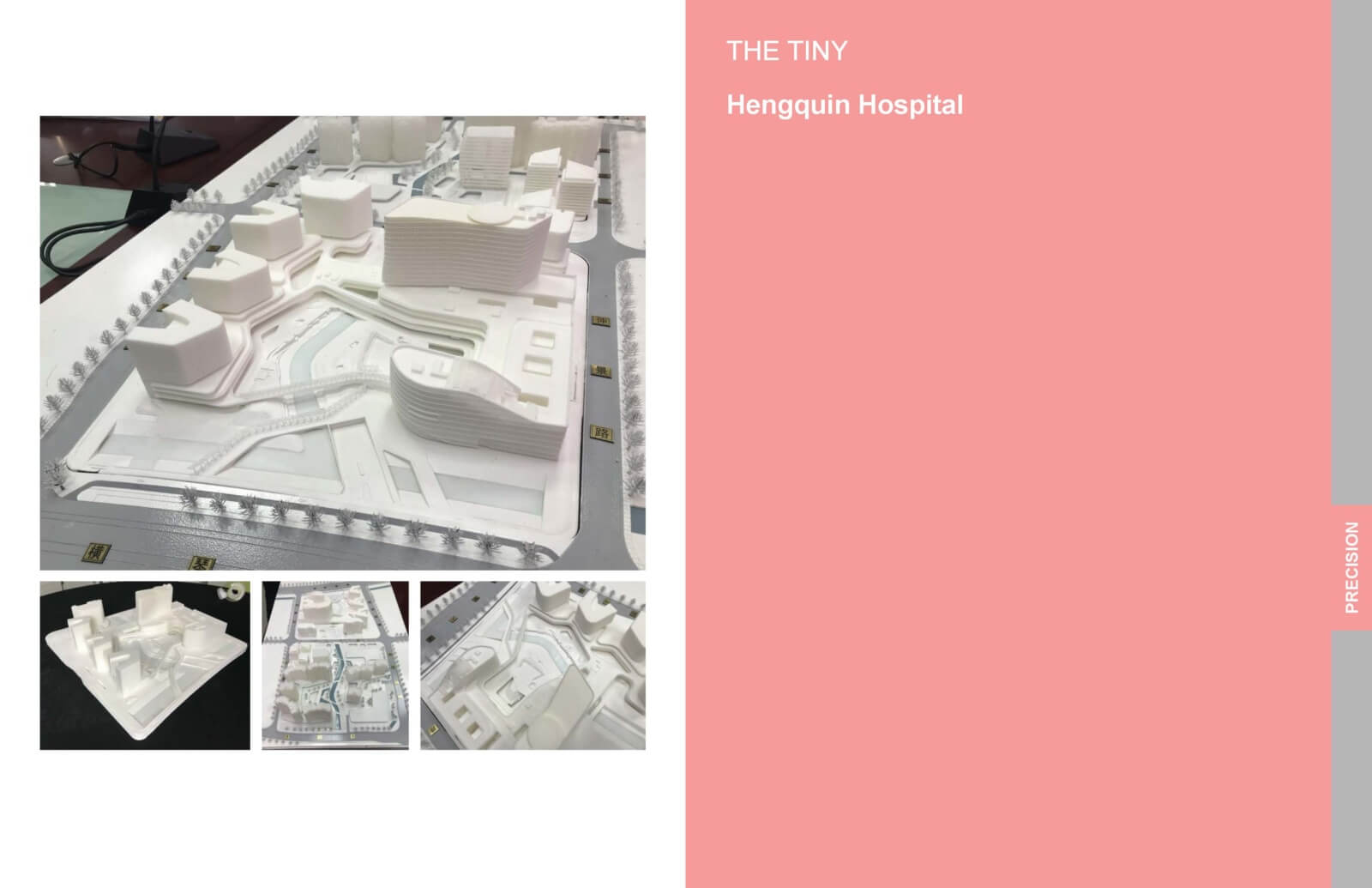 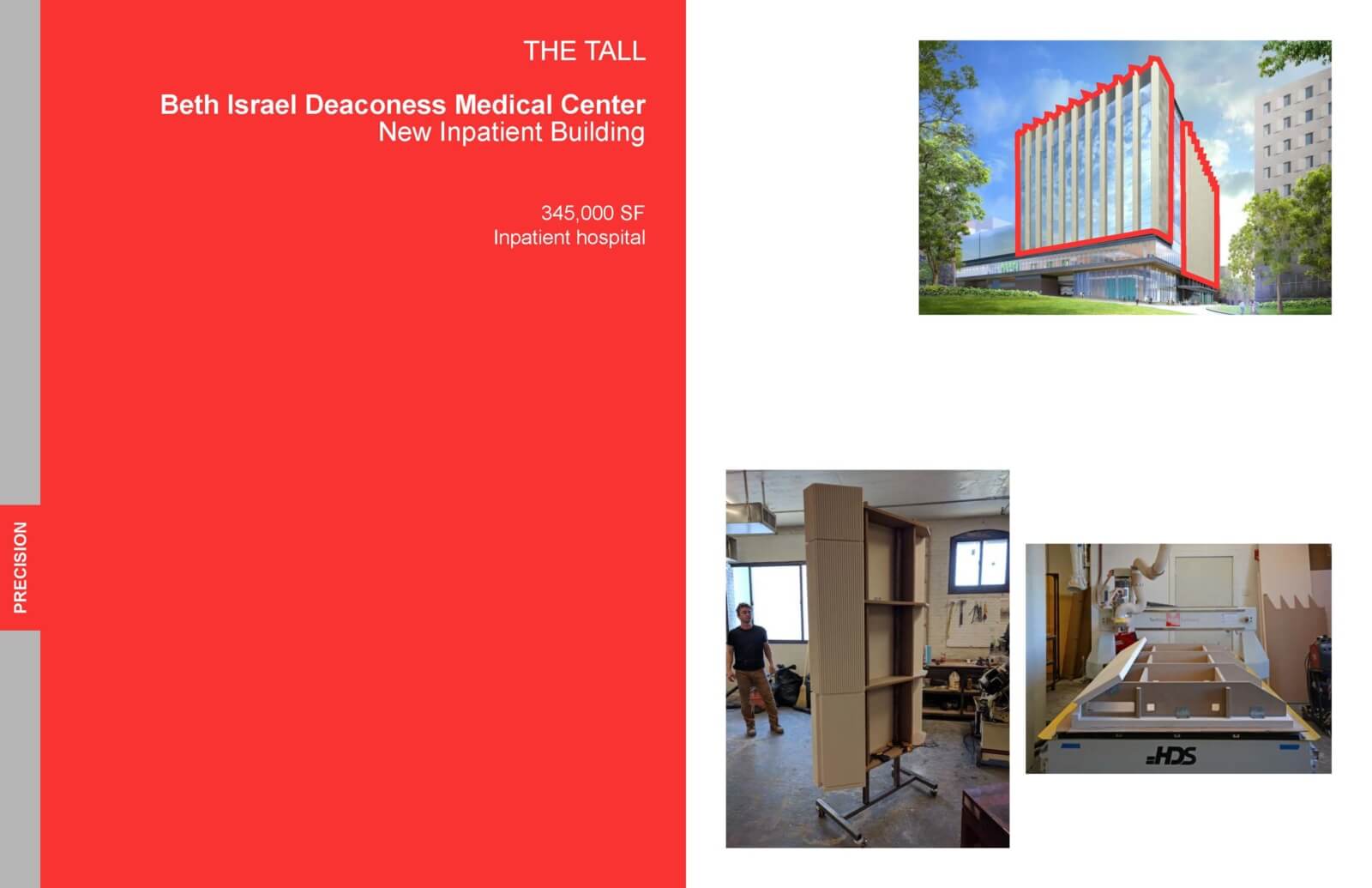 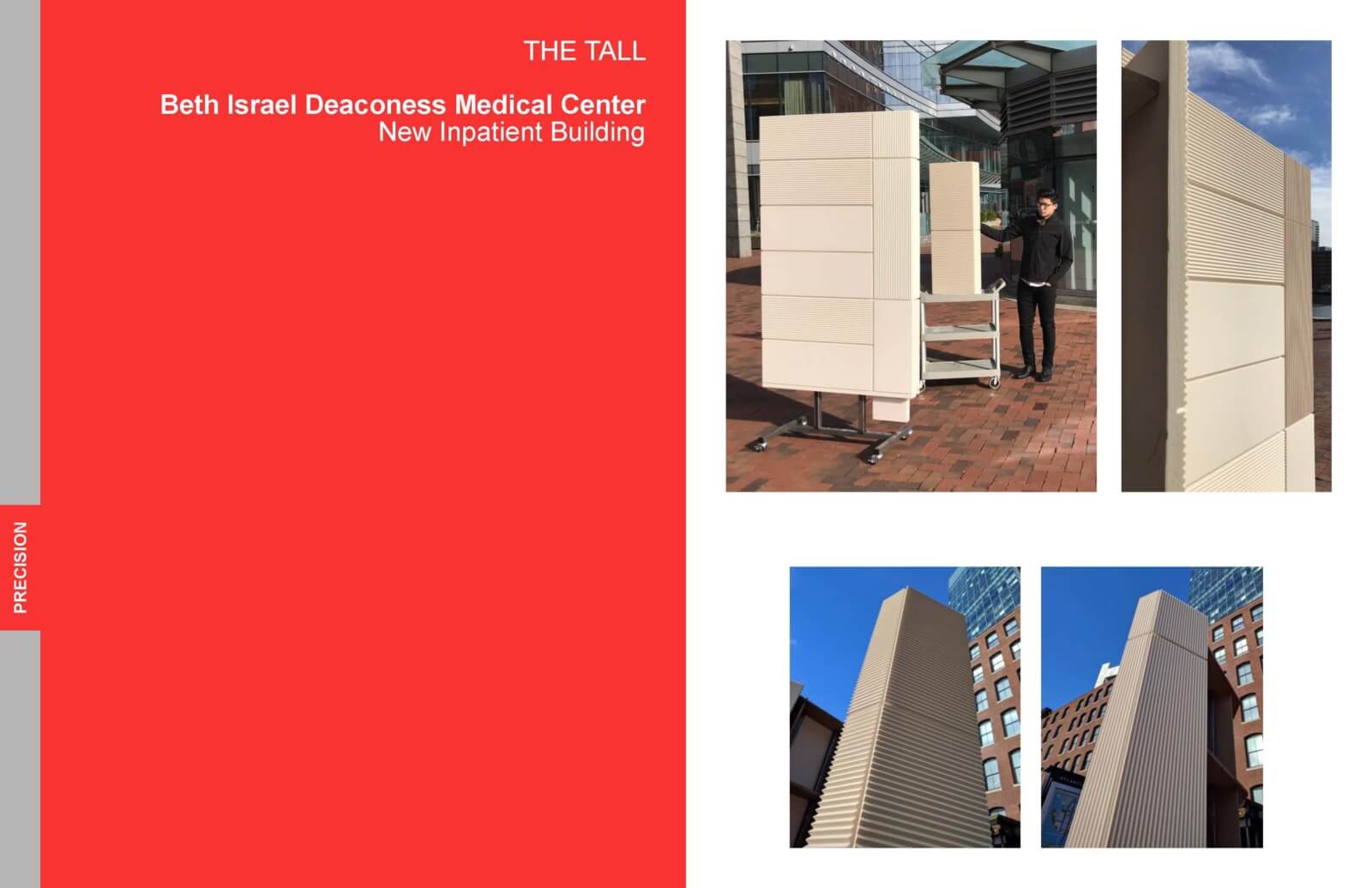 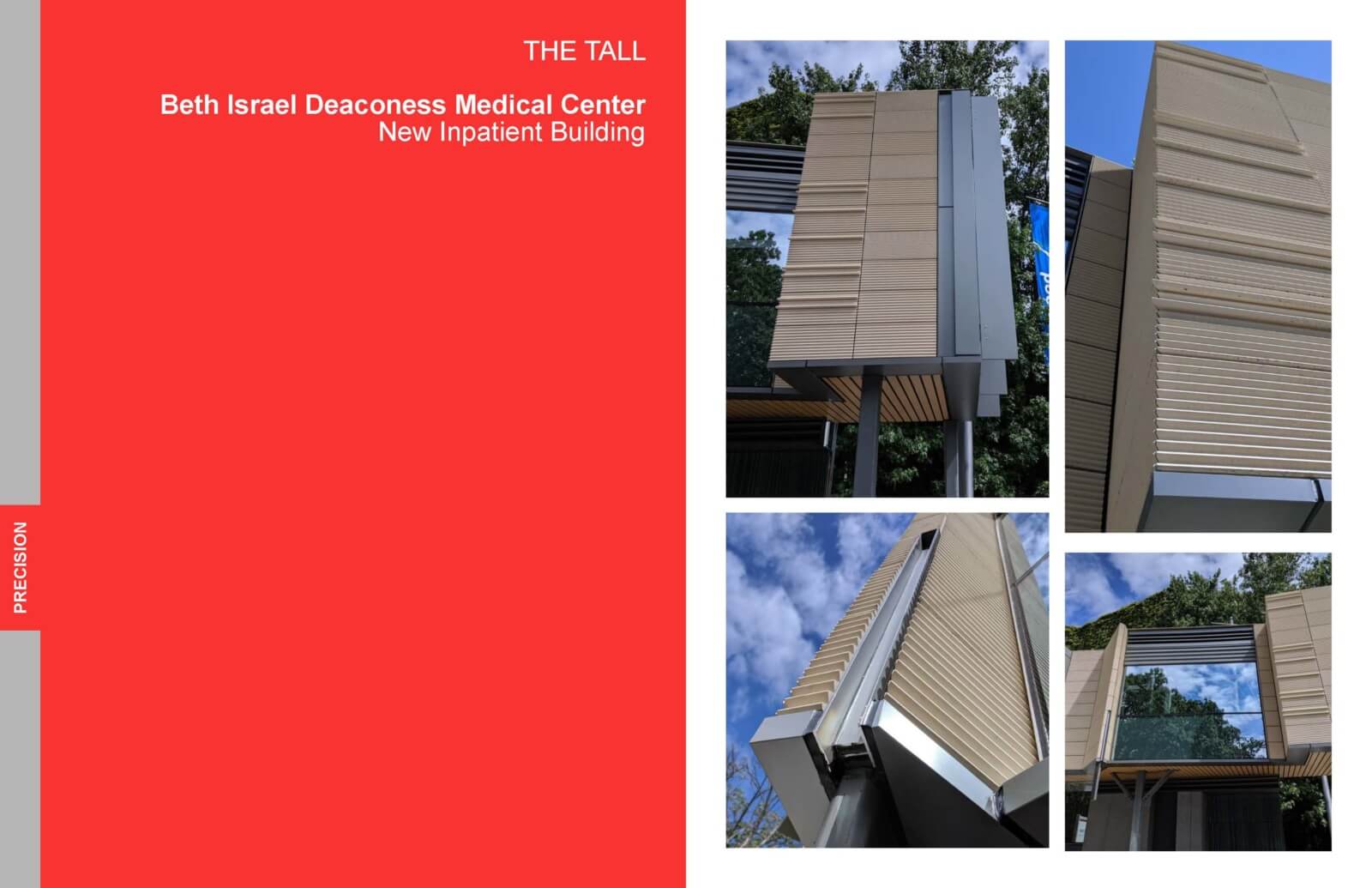 Comfort
Comfort is about how models feel to the human body and relate to the human scale. The Tiny: For the east façade of The Pennsylvania State University College of Engineering West 2 Building, models were based literally on “whatever comfortably fits in the hand”. With rough working models at this scale, the team was able to work quickly with their hands to study various possibilities for the facade. The Tall: For the Dana-Farber Chestnut Hill project, the team chose to mockup at full-scale a very intimate moment in the project: wooden benches that wrap a central atrium. The mockup was fabricated in-house and tested moments as intimate and detailed as how a person’s back rests and how their knee falls on a curved edge as their leg comes to the floor. The model was tested and changed, and ultimately directed a final design driven by comfort for users. If the Tiny models of Penn State are about how you hold the model in your hand, the Tall model in Dana-Farber Chestnut Hill is about how you feel in the model itself. 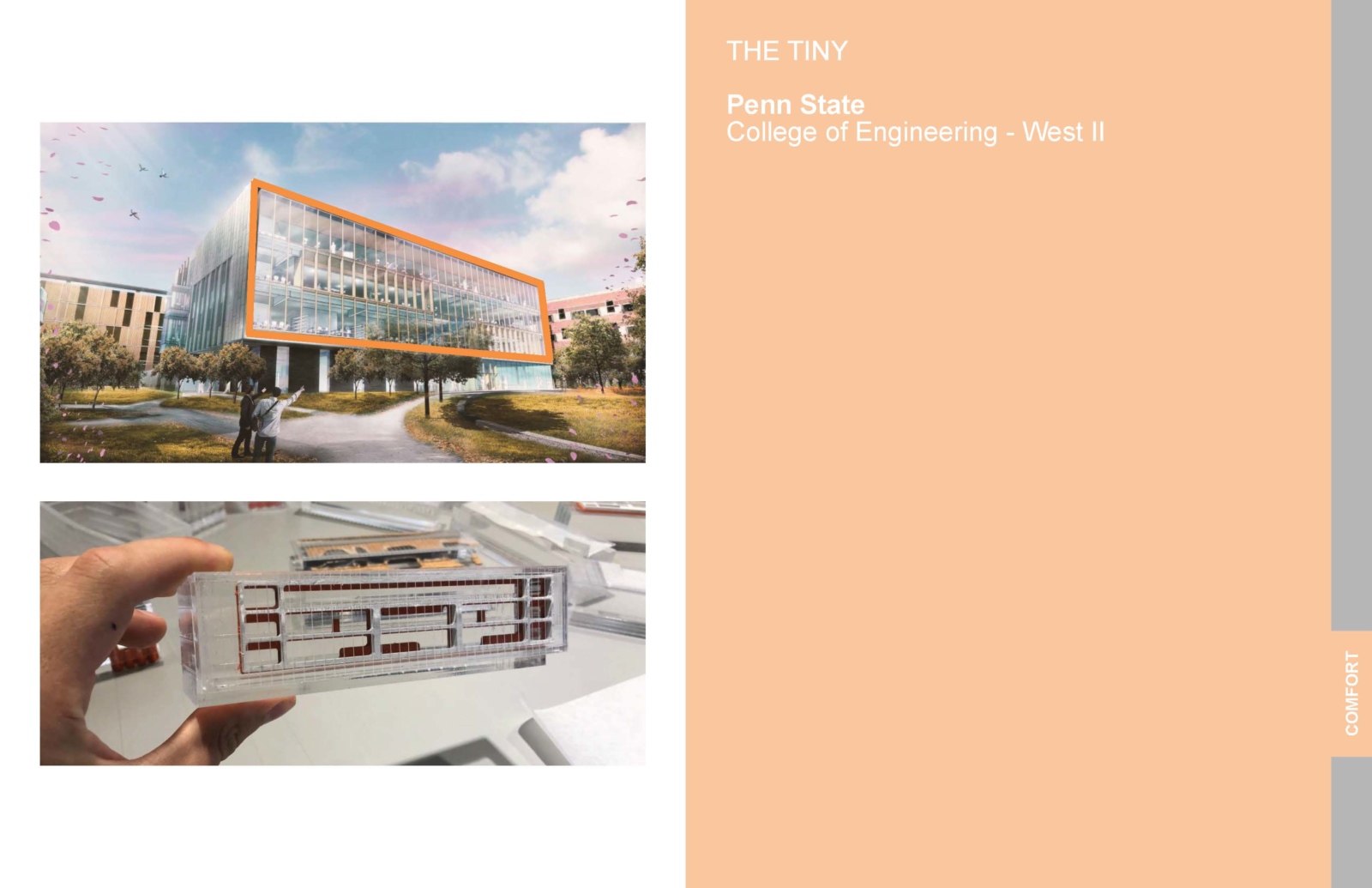 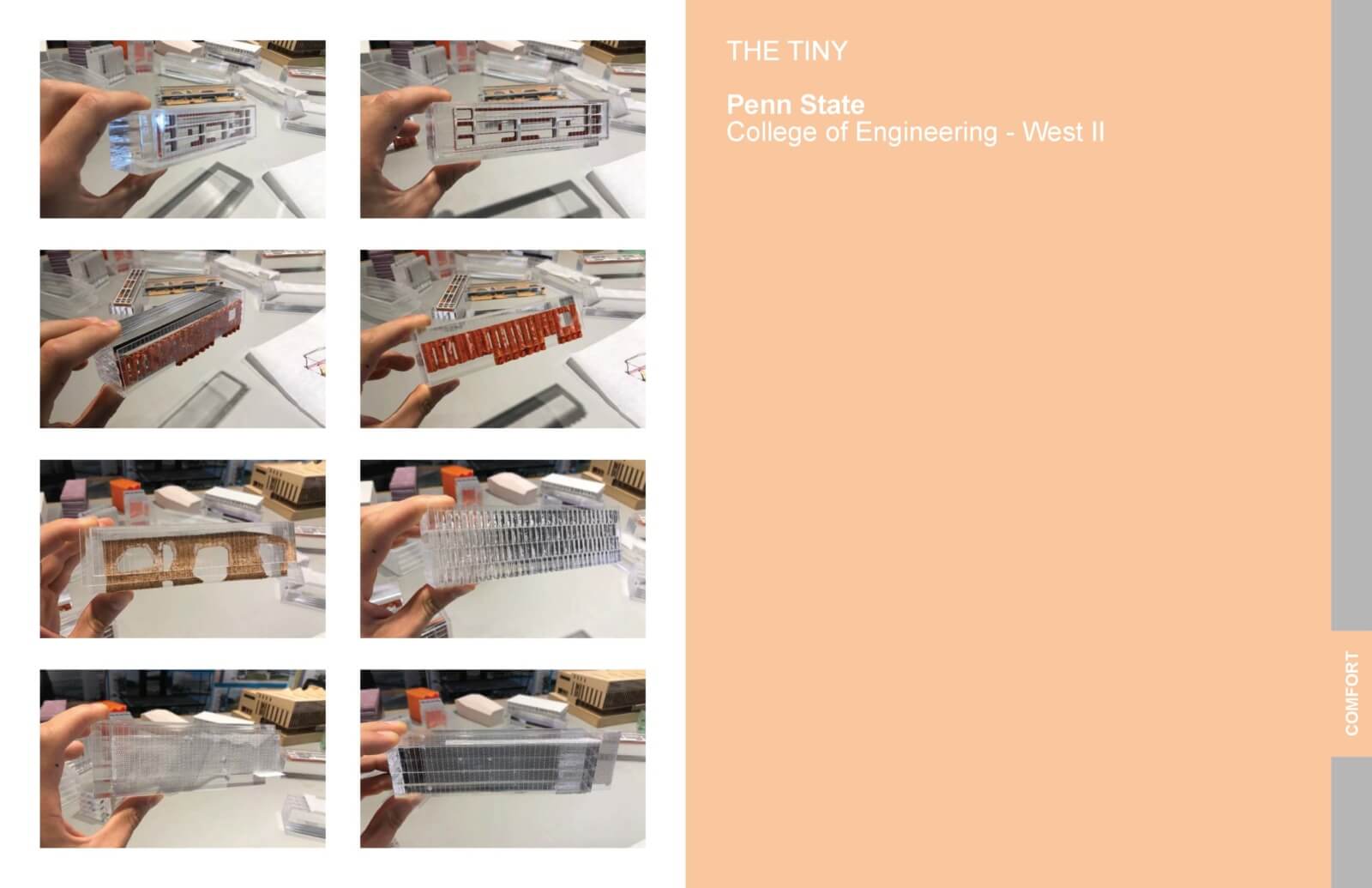 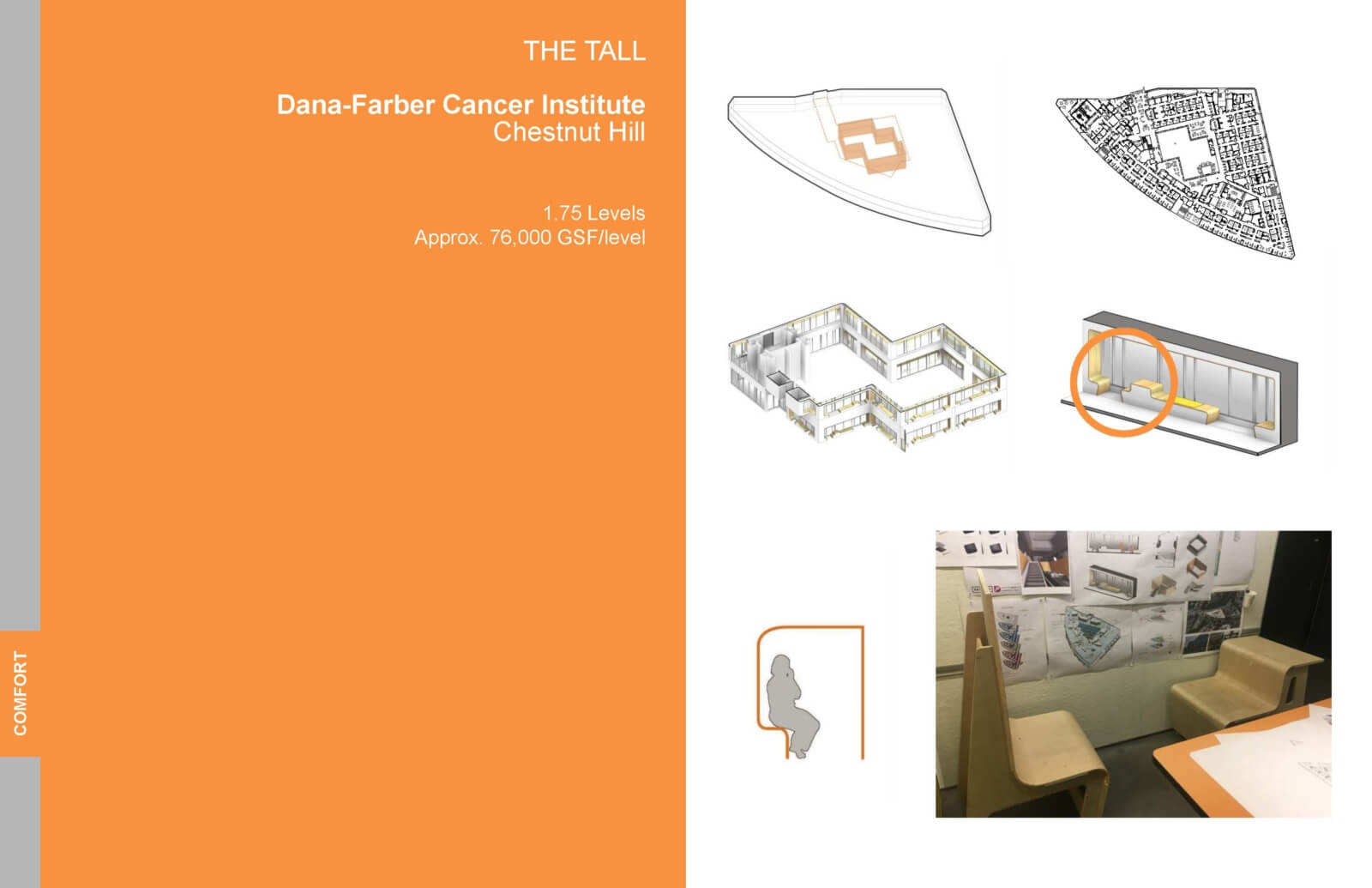 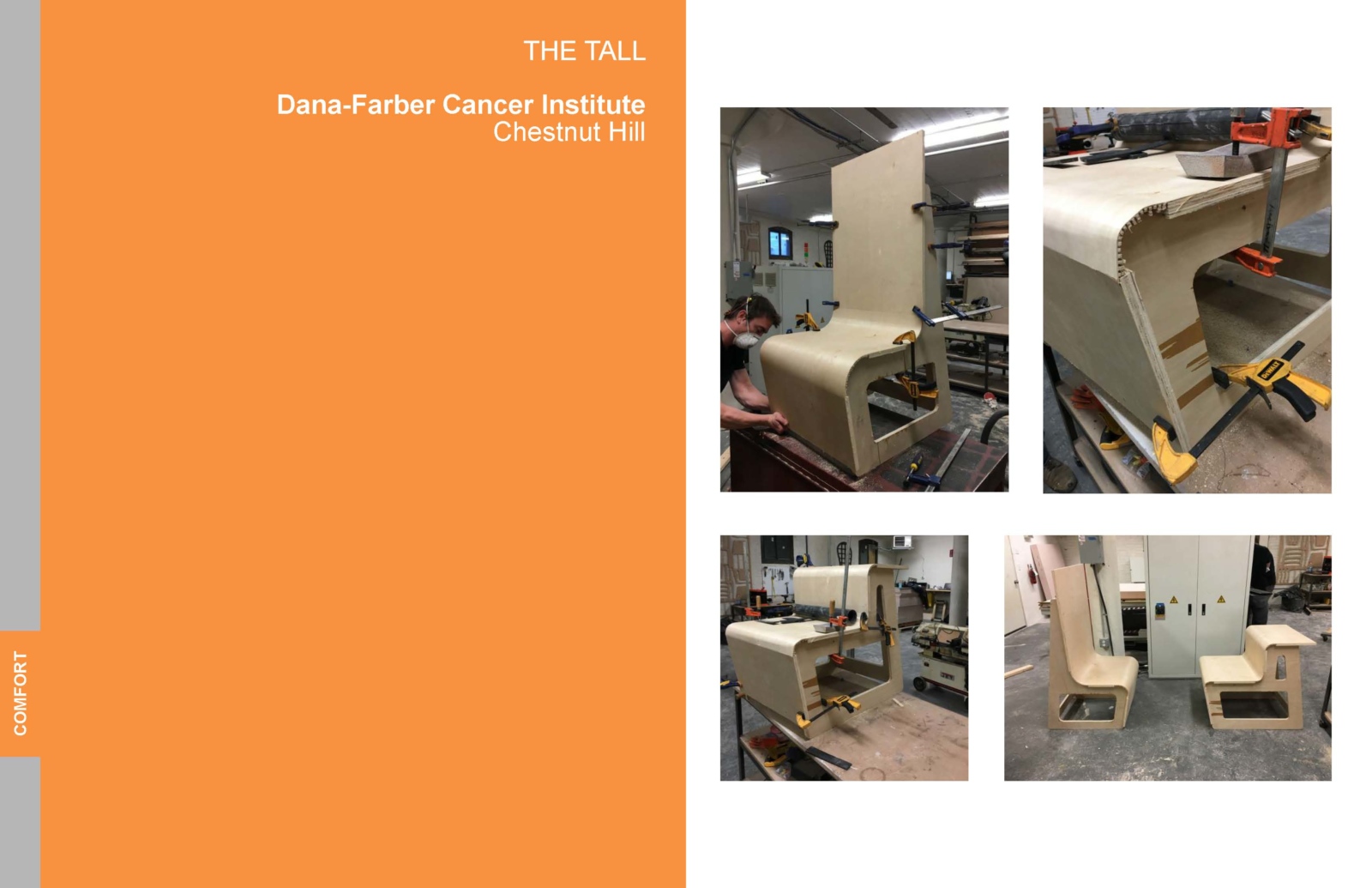 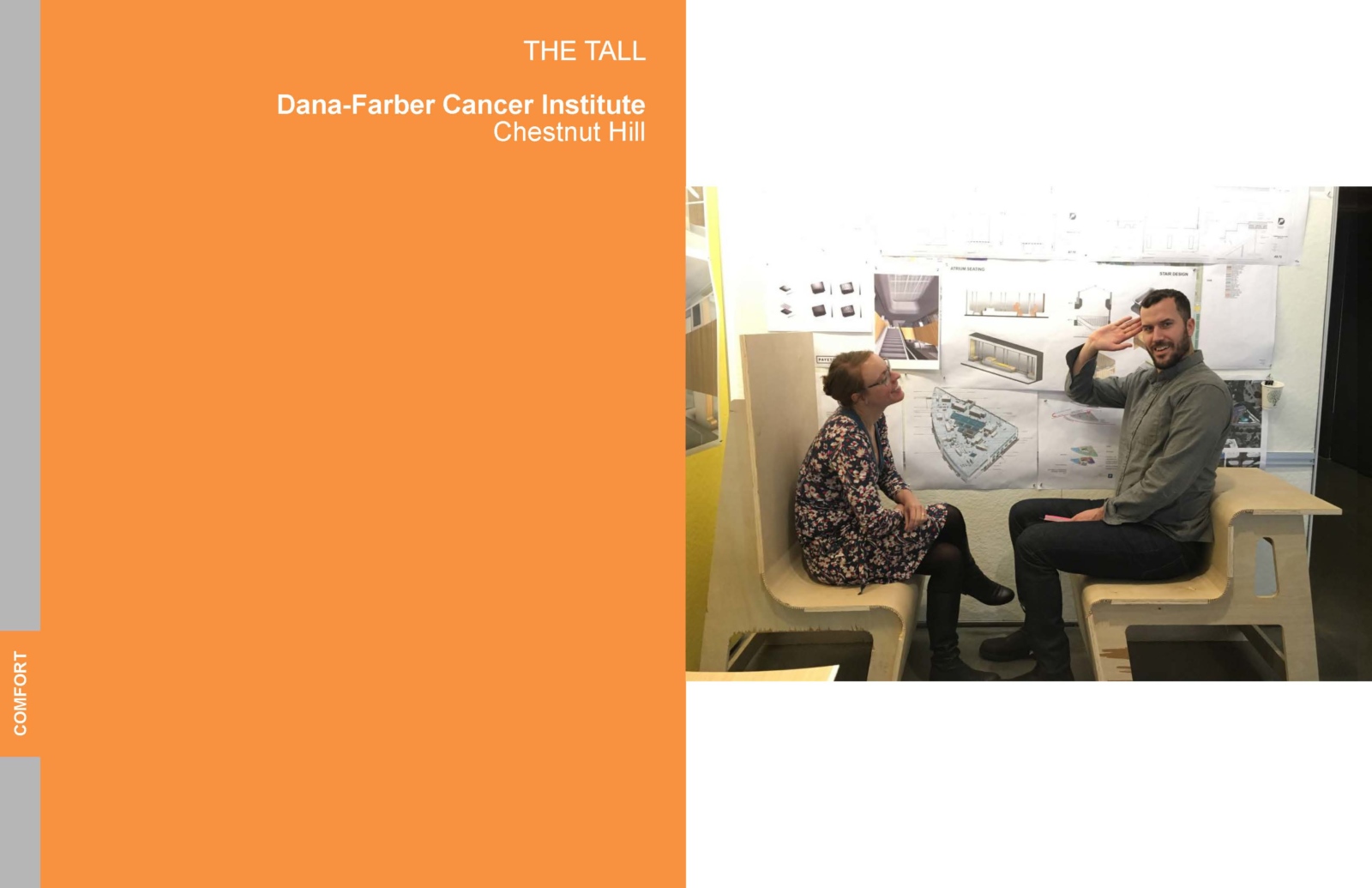