Our team of seven urban hackers tackled the design challenge set forth by Design Museum Boston’s Urban Innovation Festival from many angles. Over the course of three days the team iterated ideas to help activate the space under the I-93 overpass. One of the Museum’s goals was to showcase the design process by asking teams to share hourly updates of our work.

The area under the I-93 overpass sits at a nexus point between four very different neighborhoods – each comprised of diverse populations. By nature the space is transient; there’s no real there there – it’s a gateway to separate neighborhoods, but also a parking lot for area events, businesses and apartment buildings. In its current form, the site is not a destination. And there are good reasons for this. Firstly, it’s dark. Secondly, it’s loud. Ambient traffic noise from the surrounding onramps and exits create a cacophonous symphony of road noises that’s hard to ignore. It’s also industrial and utilitarian by design. The physical space of the underpass was not created to be a valuable community space – in the existing condition, it is an unavoidable byproduct of the elevated highway.

And yet, it could be more than just a parking lot. It could be a valuable activity space for the various communities that exist in the area: tourists from around the city and suburban dwellers drawn to weekend open markets on Harrison Avenue; residents of the large apartment buildings that dot Albany Street; commuters who must cross towards MBTA bus stops and T stations; the city’s homeless population served by the Pine Street Inn and its many resources. There are clear global and historic precedents for this kind of activation. It doesn’t have to be just another urban wasteland, unsafe for pedestrians and bikers.

We propose re_vive: a system of nine different sculptural framework types designed and assembled to provide opportunity for and reinvigorate the space for each community. And though each group has different needs from the space, each element of the re_vive collection will allow those users to plug in to the infrastructure and take ownership of the space. By designing a language of sculptural forms, we’ve provided a system that can be deployed at different levels and phases. To illustrate our concept, we took the opportunity to build a half-scale prototype in our Fabrication Space. A couple members of our team split off and worked on production while the others remained on site to hone and pitch our idea while developing graphics and gathering community feedback.

The system we’ve designed also speaks to the need in the space for wayfinding. The form we developed is sculptural in nature and when simplified brands the location in icon form. This icon is then color-coded to each program type (transportation = re_connect, community greenspace = re_energize, community resources / services = re_source, art integration = re_create and commercial activity = re_activate). The colors and iconography of the wayfinding symbol inform the color palette of the sculptural frameworks as they are installed. The icons would then produced as a stencil or sticker and deployed throughout the city, serving as breadcrumbs, drawing all the users to the site and leading them to points throughout the city, like the Harbor Walk, adjacent green spaces, Broadway T station, Pine Street Inn and businesses in the local economy. In combination these elements transform the space in to a destination and draw not only constituents from the local neighborhoods, but also future users from throughout the city.

Throughout the weekend all ten hackathon teams had three opportunities to refine and pitch their ideas to a panel of judges. On the final day we were able install our prototype, which took the form of a four person swing mounted between two ladders. We had the great pleasure of inviting any hackathon attendees to test our prototype.

We saw the immediate impact of our functional sculptural form as adults and kids alike found great delight in trying our prototype. 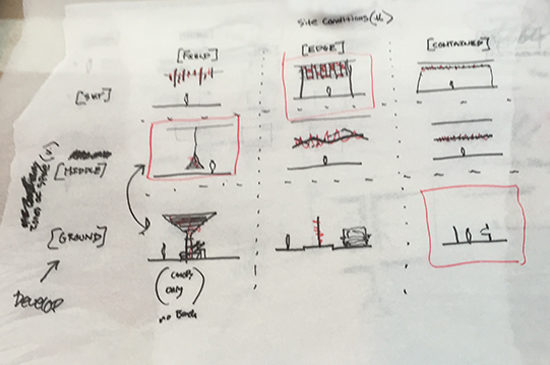 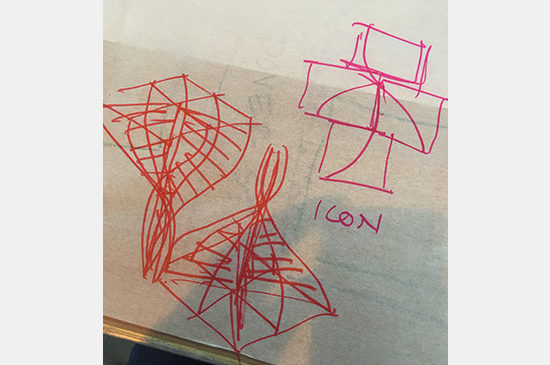 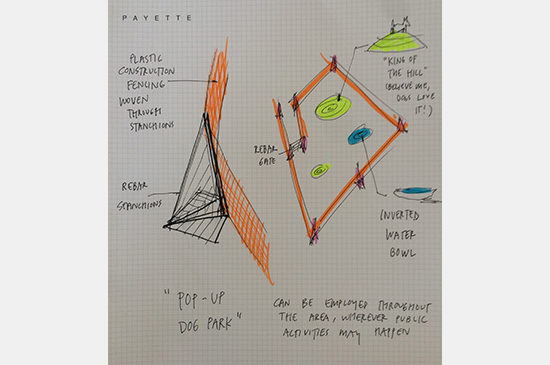 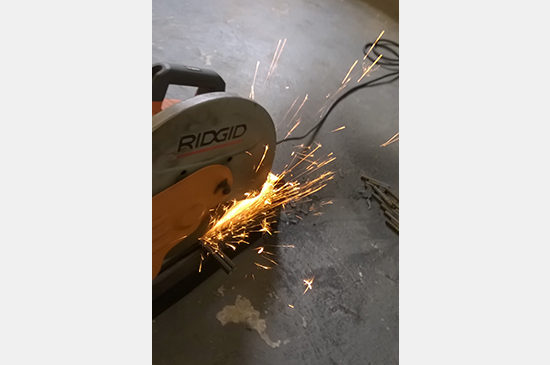 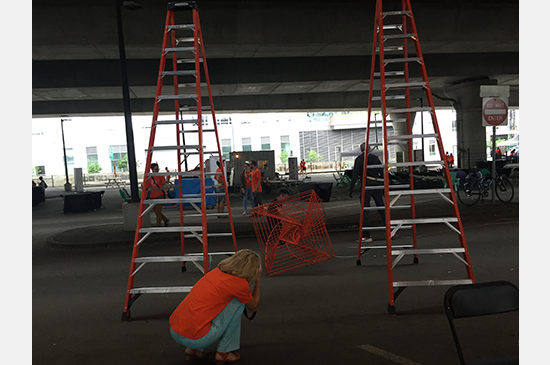 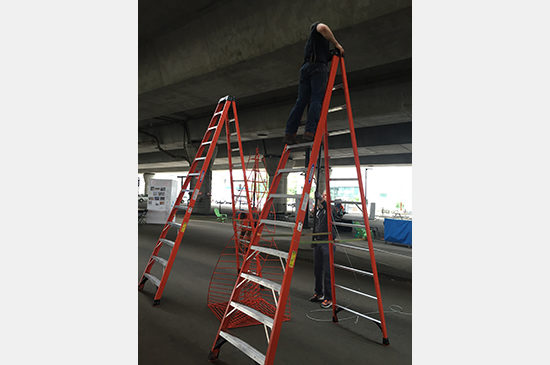 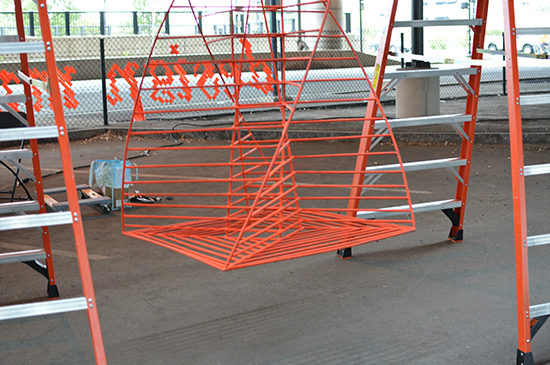