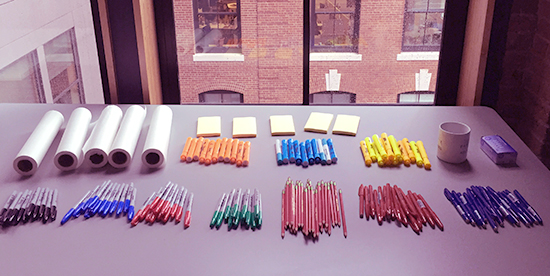 Payette’s Women in Design (WiD) group used an interactive brainstorming session last week to generate a vision for 2016. To ensure a session that captured a wide range of ideas and voices as well as stayed on topic and built on one another ideas, we tested the following techniques:

Capture the individual ideas: In his book The Medici Effect, Frans Johansson posits that brainstorming sessions which start off with people talking often leave ideas on the table because people often forget the details of their own ideas as they wait for a turn to speak. To allow people to bring and record their individual ideas, the topics were distributed before the session and the session began with 10 minutes of everyone writing their ideas down on post-it notes for the three topics.

Generate ideas by looking at the problem in a new way: The goals of the meeting were to consider renaming the group, create a vision for the group in 2016 and generate a list of events to pursue in 2016. This was a tall order for a one-hour session and also fraught with danger of just going over the same worn paths. To encourage new ways of considering the upcoming year, we personified WiD, encouraging the group to think of her having a name, a vision for her year and a list of resolutions of things to achieve. To make it a bit playful, we used boards that spoofed on the “Hello my name is” tag and asked people to introduce their “WiD.”

Build on ideas by encouraging many voices: With a group of about 20 people, we wanted to fully capitalize on all our voices and build upon one another ideas. Therefore, we followed up the initial individual brainstorming with small group discussion (4-5 people). Besides the parameter that everyone had to introduce their “WiD,” how these groups operated was left very loose. Some groups chose to begin consolidating ideas while others used the time to generate further ideas together.

Capture the full range of ideas:  All the ideas and WiD identities were written on post-it notes in the small group session and everything was then hung on three different posters at the front of the room entitled:
“Hello, my name is WiD ..?”
“In 2016 I would like to …”
“My vision for 2016 is …”
We then discussed these ideas with the full group. 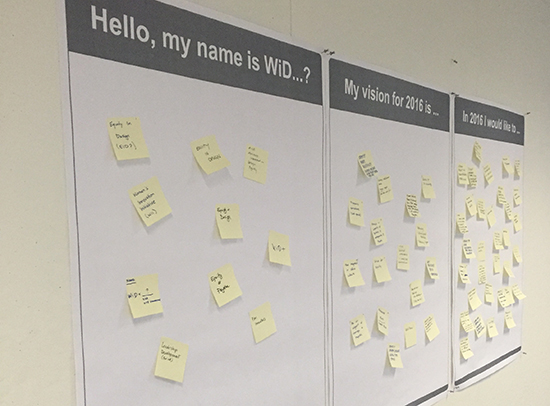 Brainstorm now, edit later: Recognizing that this session was about brainstorming, the consolidation into a cohesive vision was left for later.

Working this way allowed us to hear from everyone and generate new ideas. Tweaks for next brainstorming sessions would include focusing on how to continue to reshape the dialogue (after the initial individual brainstorming session the “personification” of WiD was largely abandoned as a tool) and how to make the final conversations more fluid and less of a recap of each group. Overall it was a very productive session and we are looking forward to using this material to shape the agenda of WiD in 2016.

And, we are curious to hear, what are your favorite group brainstorming techniques?