Ten Thousand Suns was a summer-long botanical project, led by Payette Landscape Architect Adam Anderson. Over 10,000 sunflower seeds were planted during the course of the summer months on land that until recently sat under a highway with high compaction, low-organic material and embedded with toxicity in Providence, Rhode Island. Adam and a team of volunteers took on this feat with no other motive then developing a garden/park for everyone to enjoy. 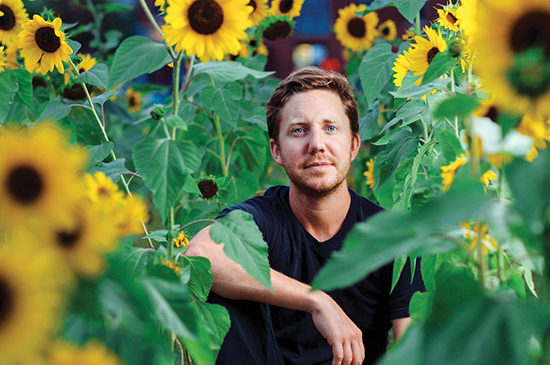 Rather than using high maintenance and energy intensive large swaths of turf grass, the installation used the bio-accumulating (removes toxins) and habitat creating properties of Helioanthus, aka sunflowers. The seeds were planted in rows within a series of large circles, leaving paths in-between for intimate exploration. The project creates a spontaneous and unique cultural identity for the citizens of Providence and its visitors during the summer months.

The project lasted for the duration of the sunflowers’ life cycle (June-September) and at the end of the sunflowers cycle they were collected and composted. Ten Thousand suns project was made possible by a team of volunteer artists, architects, students, friends, neighbors and passerby. The effort and final project did not go unnoticed, as the Rhode Island Monthly Magazine honored Adam’s ambitious endeavor by naming him one of the Rhode Islanders of the Year.

The Rhode Island Monthly article highlights Adam’s Ten Thousand Suns journey and the challenges he faced including the uneven quality of the soil, the summer-long drought and a flock of geese, just to name a few.

But it was well-worth it, as by late August the sunflowers were blooming “like a slow fireworks show” giving a pretty splash of yellow in the city that attracted picnickers, yogis and changed people’s perception of the possibility of the landscape.

Will there be sunflower in Providence this year. If so can you tell me when they start working on it. Thank you
Gerry