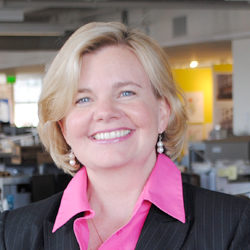 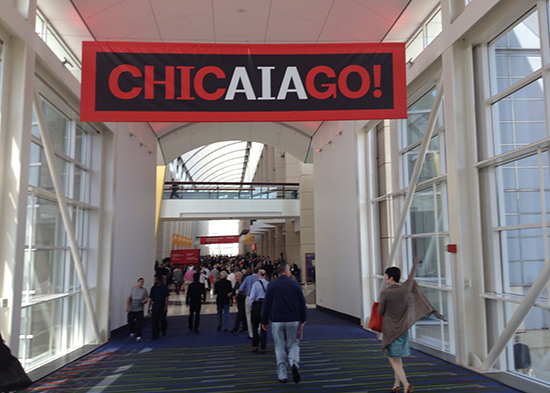 New experiences offer great opportunities to learn and find inspiration. For the many things I have done in my career, I had never been to an AIA Convention – so attending the 2014 convention was an exciting “first” for me. For the last couple of years I have had the honor to serve on a National Task Force for the AIA, the Membership Service Resource Task Force (MSRTF) (a terrible name with a great purpose). Given much of our work is about “member service/value” – it was imperative that I understand and experience what is indisputably the AIA’s signature event for its members; Convention. With great support of the firm I was able to attend this year’s convention in Chicago.

This year’s attendance was nearly a record with over 20,000 in attendance! Even for an extrovert that sounds overwhelming. Despite the huge numbers, I did run into people I know from various phases of my career, including classmates from architecture school and I met amazing, interesting folks from coast to coast.

The enthusiasm and passion for design and the contributions we make to their communities was palpable. Bringing this many talented, creative people together with a shared purpose reignited and energized my own drive and commitment for design and leadership within the greater community. Indeed the theme of the convention was Design with Purpose!

Three key takeaways from the Convention included: Civil Leadership, Mentoring and Resiliency. These were echoed in the keynote addresses, breakout sessions and in cataloguing the achievements of the award winners. Our role as architects goes well beyond that of designing buildings, but to being leaders in wide-range definition of our ‘community.’ The lifeblood of our profession lies in mentoring, engaging and offering opportunities to our next generation. Resiliency goes well beyond sustainability – and ties back to being civic leaders. A common theme in all of these areas is leadership.

The most touching moment at the convention for me was when they announced Eskew+Dumez+Ripple as the AIA Firm Award. Based in New Orleans, the culture of the firm has very much been about being a part of the community and mentoring young leaders. They have more than doubled in size since Hurrican Katrina swept the region in 2005 and they have taken a significant role in the rebuilding of many communities since that time. Only two days before the Board made their decision Allen Eskew, the founder, passed away suddenly. Helene Combs Dreiling, FAIA, AIA President, announced the award and noted the two partners and a couple of their colleagues were there to receive the award. The curtain rose and the entire firm of 50+ people were on stage.

Another seminal moment in the Convention was the AIA Gold Medal award, which was posthumously, awarded to Julia Morgan, FAIA. She is the first woman to win this award. Ms. Morgan was a pioneer in her time and significant contributor to the built environment, practicing for over 50 years, designing over 700 buildings of all types. She was an icon, but at a time when things are not as they are now. There was a big campaign to push for this award. She has certainly opened a new door.

It is hard to summarize the Convention without noting the EXPO. This is ABX to the tenth power. The number of exhibitors, size and complexity of the booths was unbelievable. With 20,000 potential clients passing through – it IS a great place for them to be – and showcase their new materials and products.

Drive, commitment, creative design, passion and purpose were on display throughout the convention. It was amazing to see the broad diversity in the profession, in terms of backgrounds, geography, type of work, size of firms people were from and the amount of time people had been in the profession.